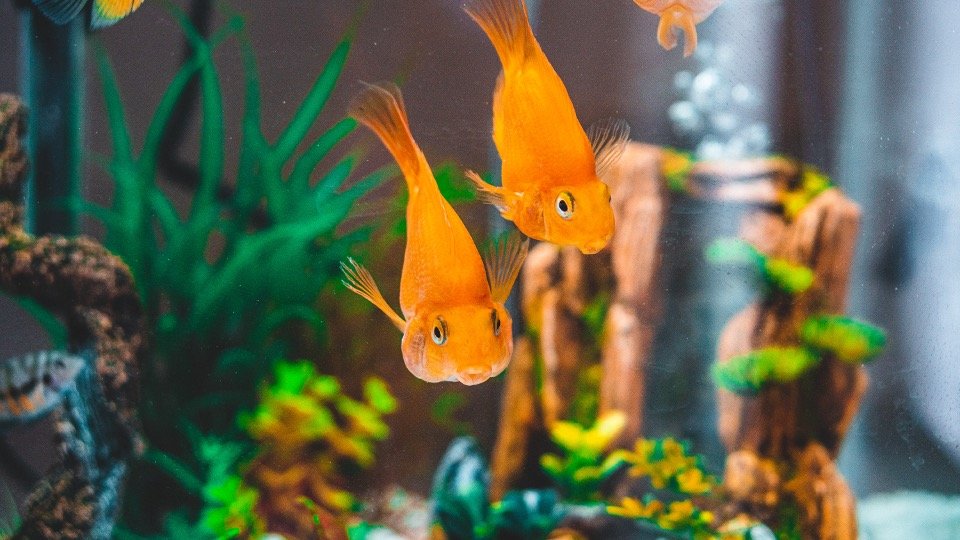 You’ve probably seen goldfish and koi living together in ponds before, or perhaps you’ve noticed them in pet store tanks next to one another and noticed how similar they look. It’s not surprising that many people think that goldfish and koi can breed together because many people confuse koi and goldfish with one another. For more on whether koi and goldfish can breed together, continue reading. You may be surprised by the solution!

Large decorative fish called koi, also known as nishikigoi, were developed from the Amur carp. Koi are also referred to as Cyprinus carpio, although their scientific name is Cyprinus rubrofuscus. These fish have the potential to grow fairly large and are often bigger than goldfish, with koi having a maximum length of 36 to 52 inches compared to 12 to 18 inches for goldfish. The sensory organs that resemble whiskers that are often found on catfish are called barbels, and koi have two sets of them on their faces. The main function of these organs is to locate food, particularly in dimly lit areas.

What is a gold fish?

Domestic fish called goldfish are related to Prussian carp. The goldfish is known by its scientific name, Carassius auratus. Goldfish are some of the most diverse and underappreciated species you’ll find in a freshwater aquarium because they have undergone selective breeding to produce a wide range of sizes, colors, and forms. Koi have barbels, whereas goldfish do not.

Can Koi and gold fish?

We now know that goldfish and koi are two distinct species, thus they shouldn’t be able to breed, right?

Koi and goldfish are both specifically developed carp kinds, so they may actually mate and produce hybrid offspring. Koi and goldfish mating is similar to how horses and donkeys crossbreed to produce mules, or how wolves or coyotes crossbreed with domestic dogs to produce canine hybrids. Because they are a cross between a koi and, most frequently, a comet or common-type goldfish, koi and goldfish hybrids are frequently referred to as “koimets.” This isn’t because premium goldfish and koi can’t breed together; they most definitely can. It’s because it’s uncommon to keep fancy goldfish and koi in the same pond because fancy goldfish are smaller and slower than koi, and koi have a history of bullying fancies.

How Can I Identify Koi and Goldfish Hybrids?

There is a 50/50 split between the goldfish parent having no barbels and the koi parent having two sets of barbels in hybrid goldfish and koi fish. The simplest method to tell if you are looking at a hybrid of a koi and a goldfish is typically the presence of a single set of barbels.

These hybrids often range in size from normal adult koi to goldfish, so you might get a fish that is bigger than a big goldfish but smaller than a typical adult koi.

What Should I Know About Goldfish and Koi Hybrids?

Koi and goldfish hybrids are sterile, like many other interspecies hybrids. This means that they are completely incapable of reproducing, even with other hybrids. It also doesn’t matter if the hybrid is a male or a female. As far as investigations have proven thus far, there are no exceptions to the rule that both sexes will be sterile.

Individual hybrid fish differ in the characteristics they display, so keep in mind that you can have koi-sized fish that bully the goldfish in the pond. Additionally, you might have socially adept, clever fish that, like goldfish, can recognize certain, beloved humans.

Although a koi and a goldfish appear similar at first glance, closer examination reveals that they are actually rather different fish. This may make it sound strange to think about koi and goldfish interbreeding, but if they do, you might get some extremely rare, gorgeous fish as a consequence.

Sadly, these fish won’t be able to reproduce. You must maintain populations of both goldfish and koi in order to breed these hybrid fish. The good news is that both species of fish have a fairly long lifespan, meaning that your hybrid fish will probably live a very long time if you take good care of them.