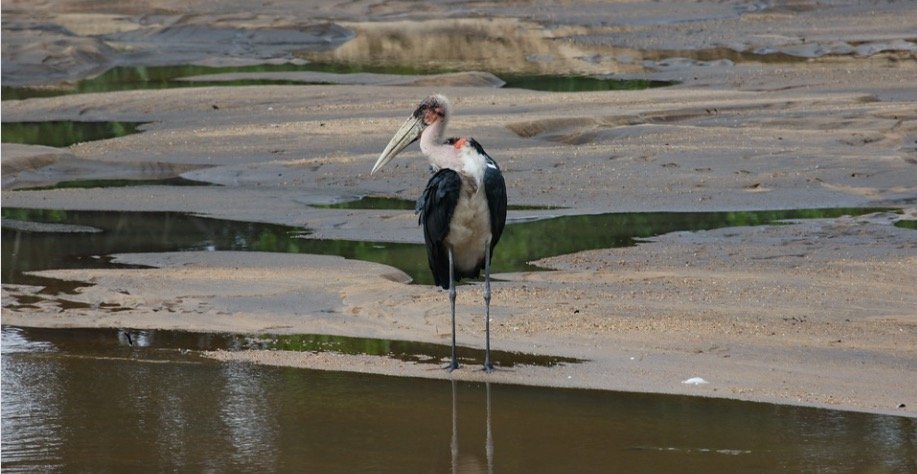 A marabou stork (Leptoptilos crumenifer) is an omnivorous creature belonging to the Animalia family, phylum Chordata, class Aves, order Ciconiiformes, and family Ciconiidae. Its genus is Leptoptilos. Its height is up to 60 inches, it weighs up to 20 pounds, and it has a wingspan of up to 12 feet, with a lifetime of up to 21 years in the wild and 41 years in captivity.

A marabou stork is a bird that feeds on smaller birds, small reptiles, and small mammals, such as insects. Its ugliness is its most distinctive characteristic. Marabou storks are preyed upon by humans and large carnivores. Physical features include red, black, and white skin colorations, and feathers on the skin. 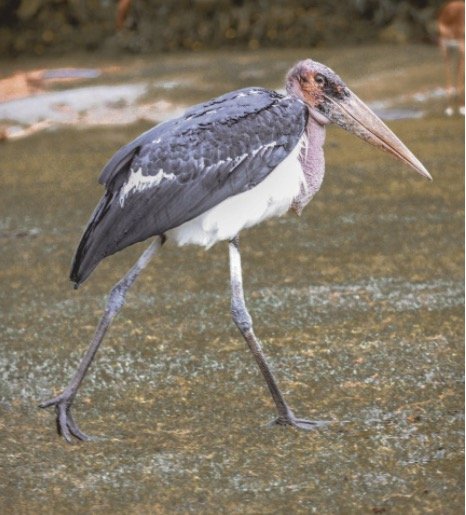 The marabou stork, sometimes known as the undertaker bird because it appears like an old, black-suited undertaker going about his business from the back, is a wading bird that may be found across Africa.

Though it may be aggressive if a person approaches too close, this unattractive stork enjoys being among people since their garbage provides a significant portion of its nutrition. It has gotten so abundant on Nairobi’s streets that it has displaced the wild dog from the city’s ecology.

Marabou storks appear to consume anything, and their numbers are increasing. However, the birds compensate for their messiness and ugliness by providing people with their cloud-soft feathers, which have been used to manufacture boas and trim garments, as well as by cleaning garbage from the environment. 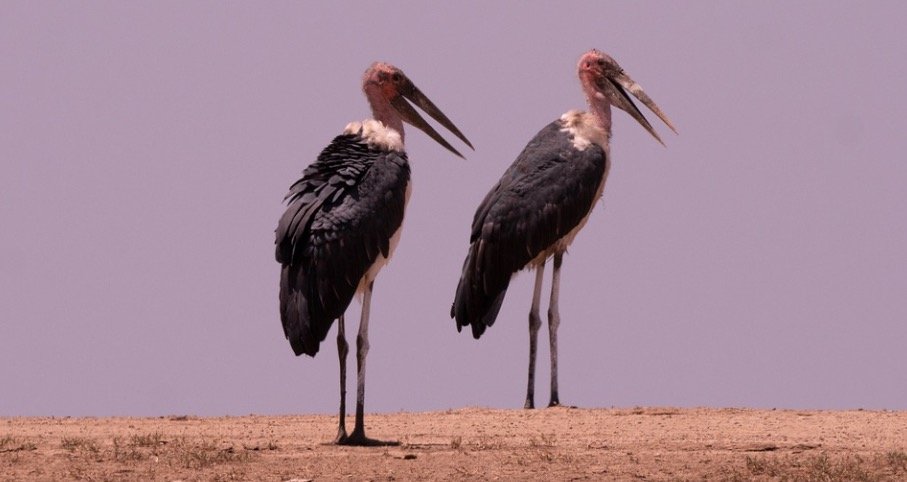 Across Sub-Saharan Africa, the Marabou stork may be found. Guinea, Ghana, Nigeria, South Sudan, Ethiopia, Kenya, the Democratic Republic of Congo, Zambia, Zimbabwe, and South Africa are all included.

It doesn’t care about where it lives and may be found near landfills and waste dumps, as well as in towns and cities like Nairobi. The bird may also be found in national parks such as Guinea-Cantanhez Bissau’s Forest National Park, Swaziland’s Hlane National Park, Kenya’s Nairobi National Park, Zambia’s Blue Lagoon National Park, and South Africa’s Kruger National Park.

The marabou stork’s nest is made of sticks and is modest in comparison to the adult bird’s size. It can be found in trees, cliffs, or even buildings. It’s flat with a cup constructed of smaller sticks and leaves in the centre.

In the wild, there are roughly 10,000 of these storks. Because of the bird’s preference for human garbage, its population is increasing in some areas, and its conservation status is unaffected.

• Because it lacks a vocal box, the marabou stork makes noise by clacking its bill and using its gular sac.

• It possesses one of the world’s biggest wingspans. It may be up to 12 feet long.

• Marabou is derived from an Arabic phrase that means “like a hermit” or “silent.”

• It likes grass fires and will dash toward one to capture any escaping animals. 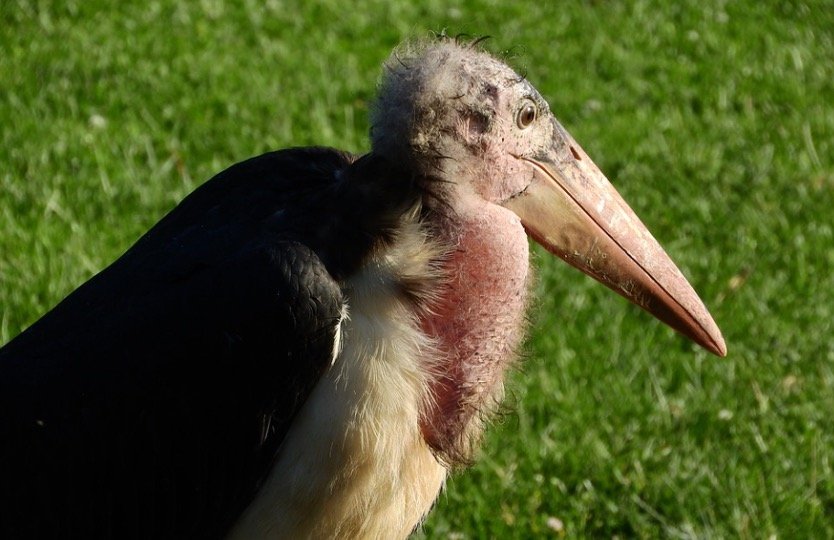 Leptoptilos crumenifer is the etymology of the marabou stork. It is derived from the Greek words “lepto,” which means “slender,” and “ptilo,” which means “soft feathers or down.” Crumenifer refers to the bird’s conspicuous gular sac, which is Latin for a money bag slung around the neck.

The marabou stork has a distinct appearance. The bird is up to 5 feet tall, with a bald, mottled pink head and a large wedge-shaped beak. The bill is used to rip apart big animal carcasses, and the lack of feathers on the skull allows the animal to reach into the innards with little fouling.

It has a hanging wattle or gular sac that can be inflated and is used in courting, and its slaty grey and white wings let it glide on thermals like a vulture. Other birds with similar sacs may use them to store food, but the marabou stork’s sac is solely for show.

Another sac can be seen within a partial ruff of white feathers at the rear of the stork’s neck. Although the stork is a wading bird, its underbelly is white, and it has long, thin white legs that end in small toes that are suitable for walking on the ground.

The bones in the legs and toes are hollow, which helps to reduce the strain on the body during flight. Both sexes are similar in appearance, albeit the males are somewhat bigger.

They aren’t the best short-distance fliers, but they soar on thermal wind currents. Though some flocks remain in the same location all year, others migrate in search of food between October and February, which is the typical rainy season. If the season is extremely rainy, they may go all the way to South Africa.

Marabou storks are known for congregating in big flocks around sources of water. These groups are frequently observed standing around doing nothing for lengthy periods of time, a habit that aids the huge birds in conserving energy.

Their white legs are due to the fact that they defecate on them to stay cool. The bird also cools down by panting. It will digest after a meal by resting on its tarsi. The tarsi are the bones that connect the bird’s “knee” to its ankle.

This stork is unique in that it flies with its neck back, allowing it to handle the weight of its massive bill. The stork lacks a vocal box and is frequently quiet, earning it the name “silent stork.” 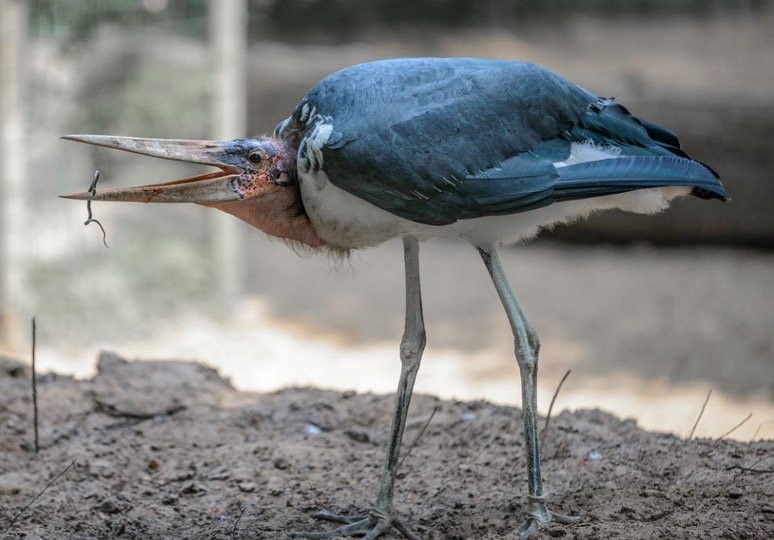 The marabou stork is a scavenger by nature. It feeds vultures on carcasses and in landfills. They will steal food from vultures or scavenge a vulture’s fallen meal. The stork may wash the meal in water before eating it if it is too unclean.

During the mating season, it will also eat live prey like fish, amphibians, insects, and reptiles. It is occasionally seen wading in the water with its beak in the water. If an aquatic animal brushes the bill, it is reflexively grabbed. The stork’s diet also includes smaller birds, eggs, and hatchlings.

Adults don’t have many natural predators since the bird is so enormous and scary, but large animals like lions and leopards may try to take one. Marabou storks are hunted by humans for therapeutic purposes.

Parasites such as Echinura, nematodes, and tapeworms, which infect birds like Amoebotaenia sphenoides, may be the most significant hazards to the marabou stork. Marabou storks can be eaten by lions, leopards, jackals, wild dogs, and hyenas. 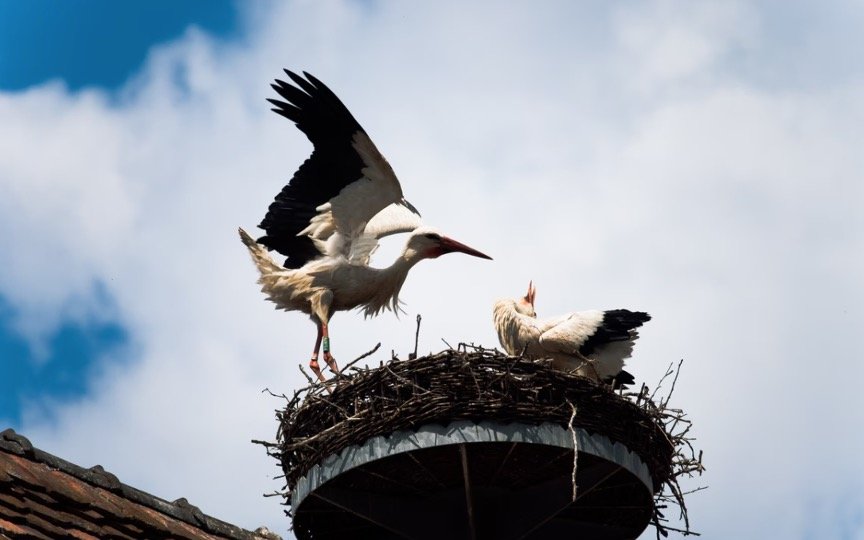 Marabou storks mate for life and reproduce during the dry season in their home country. This is because picking fish and other aquatic creatures out of the water and feeding them to the chicks is simpler.

Storks have a complex courtship ritual that includes a lot of head bobbing and sounds emitted through the gular sac, which links to the bird‘s left nostril and inflates significantly during this period.

The marabou stork breeds in colonies that might number in the dozens or hundreds. Both parents incubate the eggs for around 30 days after the female lays two to five eggs.

Only one of the chicks will survive to develop its initial flying feathers, which takes three to four months after hatching. The infant marabou stork matures at the age of four, which is highly advanced for a bird.

It will then have grown into its full adult plumage and leave its parents. A marabou stork’s lifetime is typically 25 years, but they’ve been known to live up to 41 years in captivity.