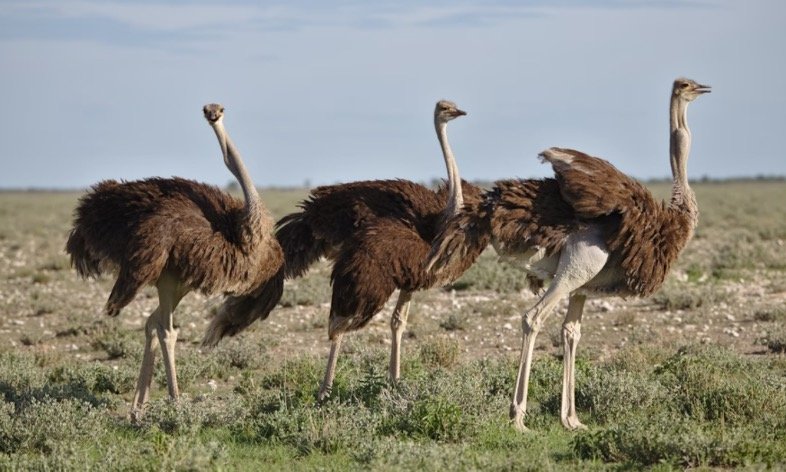 An ostrich (Struthio camelus) is an omnivorous creature belonging to the Animalia family, phylum Chordata, class Aves, order Struthioniformes, and family Struthionidae. Its genus is Struthio. Its height is up to 6 to 9 feet, it weighs up to 140 to 290 pounds, and it has a wingspan of up to 4.9 to 6.5 feet, with a lifetime of up to 50 to 70 years.

An ostrich is a bird that feeds on grass, roots, seeds, and flowers. Small wings and a long neck and legs are the most distinctive characteristics. Ostriches are preyed upon by birds of prey, snakes, and cats. Physical features include brown, grey, pink, black, and white skin colorations, and feathers on the skin, with a top speed of 42 mph.

The ostrich is one of the biggest birds on the planet. The ostrich bird appears to be a bizarre chimaera created during a lab. The Greek philosopher Aristotle couldn’t decide whether to classify the ostrich as a bird or a mammal when writing about it.

The ostrich, on the other hand, belongs to a small group of flightless birds that have adapted to life on the ground. Years of hunting nearly drove them extinct, but their numbers have rebounded enough that the ostrich now roams the African plains another time. 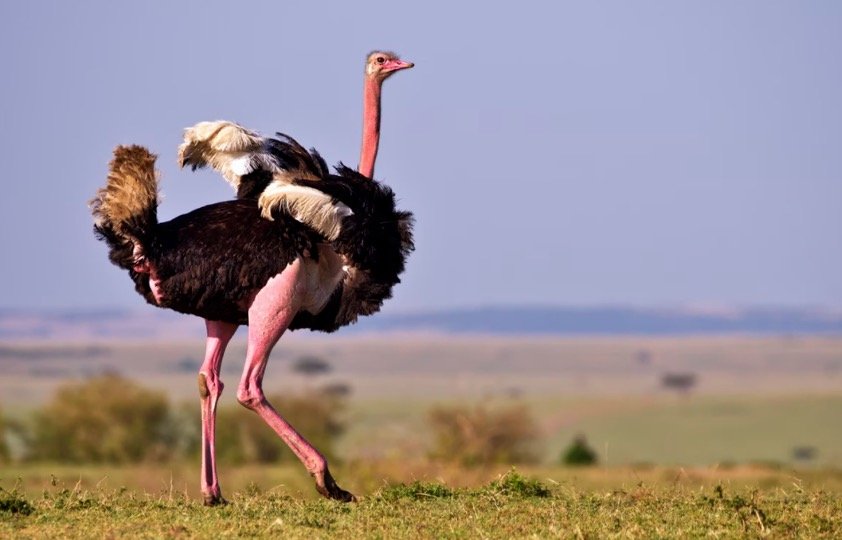 These birds could also be found in Africa’s savannas, forests, and deserts. It’s only found in a vast swath of terrain stretching from Western Africa to the Horn of Africa, as well as Southern Africa.

The savanna offers some brush for the ostrich to hide in on occasion. When the cover is scant, however, the bird relies on its speed and cunning to avoid predators. The common ostrich is assessed as a species of least concern by the IUCN Red List, but the Somali ostrich is taken into account endangered.

With just approximately 150,000 ostriches left in the wild, both species appear to be dropping significantly in numbers. When automobiles made hunting feasible, the Arabian ostrich, a subspecies of the common ostrich, got extinct in the twentieth century.

These birds are one of the most renowned zoo exhibits in the United States. It can be observed at the North Carolina Zoo, the Detroit Zoo, the San Diego Zoo, Zoo Atlanta, the Maryland Zoo, the Lincoln Park Zoo in Chicago, the Reid Park Zoo in Tucson, the Cincinnati Zoo and arboretum, Utah’s Hogle Zoo, the Saint Louis Zoo, the San Francisco Zoo, the Indianapolis Zoo, the Houston Zoo, the LA Zoo, and pretty much any other massive zoo in the country. 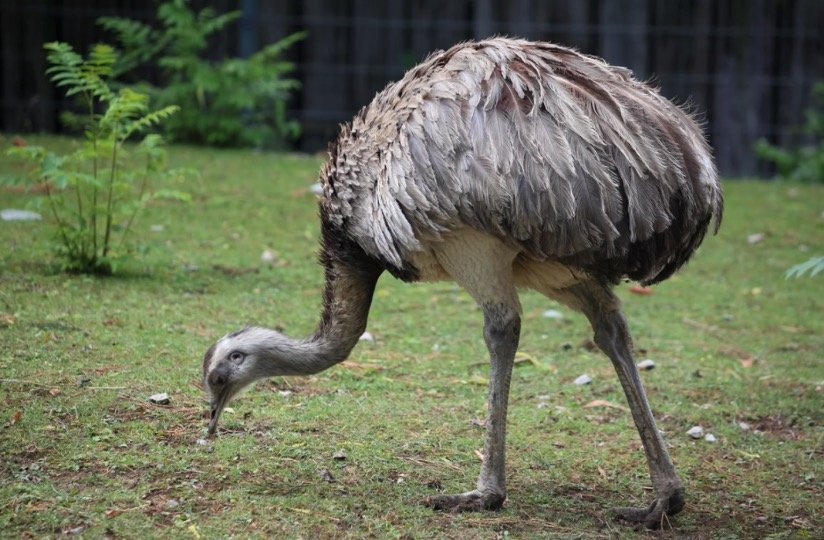 • The ostrich eye is the biggest of any known land mammal, measuring roughly 2 inches wide.

• The fact that the ostrich is the only bird with two toes is one of the most odd facts. Every alternatively bird has three or four feathers.

• As far back as ancient Egypt, Babylon, and Assyria, the ostrich bird was killed or raised in great numbers for its feathers. Royalty, upper-class women, and even mediaeval knights wore these feathers. As hunting became less popular, more than a million ostriches were kept on farms by 1913. Consequently, when ostrich feathers became less desirable, so did the farms.

• The earliest ostrich fossils were unearthed around 20 to 25 million years ago. Ostrich birds had developed to the size for which they are known, roughly 12 million years ago. They also began to depart Africa for the rest of Eurasia during this period. All of these non-African species are now extinct.

• Ostriches are multi-stomached creatures! Ostriches have three stomachs and an extremely lengthy intestine to facilitate digestion because they don’t have teeth and swallow their food whole. Ostriches will ingest stones that crush up food in their intestines, with some ostriches containing more than two pounds of stones. 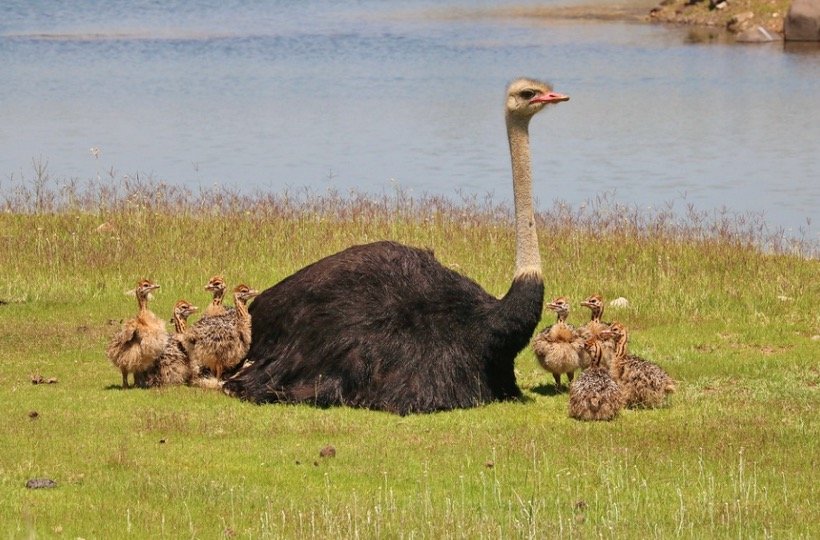 Struthio is the etymology of the ostrich genus. In Ancient Greek, the ostrich and the sparrow were both referred to as ostriches. Until the twenty-first century, taxonomists recognised only one species of ostrich: Struthio camelus, also known as the common ostrich; camelus, as you might expect, is Greek for camel, and may have been named for its ability to go for long periods without water.

The ostrich is a large flightless bird that belongs to the ratite family, that also contains the kiwi, emu, and rhea. Ratites were originally thought to belong to a single order. However, a genomic study reveals that these birds belonged to different evolutionary lineages, so they were placed in separate orders. Currently, the ostrich is the only surviving member of its family and order.

The emu, despite its similar look, belongs to a different order, the Casuariiformes. Ostriches are larger than these Australian birds. They have a better proclivity towards meat consumption. They even have three toes instead of two.

They do, however, share several characteristics, such as a featherless neck, large claws on the feet, flightless wings, polygamous mating habits, and muscular legs capable of running at high speeds. They are an example of convergent evolution, in which two distinct lineages evolve identical characteristics in response to comparable environmental stresses.

The ostrich stands out among other birds because of its enormous size. The male ostrich, with its silky black and white plumage, can rise up to 9 feet tall and weigh up to 287 pounds. The female, with a height of 6 feet and a weight of 242 pounds, is much smaller.

Around her main body, she and her younger chicks have more gray-brown feathers. The ostrich’s long and sinewy neck, head, and legs are virtually totally bald, save for a tiny coating of down, irrespective of gender.

The skin is pink or grey in hue, but the specific colours and patterns differ according to the subspecies. Given the ostrich’s massive size, it’s not surprising that its wings are incapable of flight.

According to the data, the wings and tail assist the bird in maintaining balance and courting females. The very soft feathers, which lacked the waterproof properties of the many other birds, hung loosely from the body.

Throughout the mating season, ostriches cluster in flocks of five to fifty birds, and during the rest of the year, they concentrate in smaller groups of two to five individuals. These flocks are frequently observed with other grazing species like antelopes and zebras.

Nevertheless, this tolerance for other species does not usually extend to different flocks, since these birds will aggressively defend their area from invaders. Unlike many other birds, the ostrich can only make a loud roar and a harsh hiss, which is typically employed by males to frighten one another.

These birds spend virtually the whole day grazing and searching for food on the African savannas, where it is plentiful. Ostriches appear to possess an incredible attraction to large bodies of water, where they’re going to wash themselves off frequently to wash themselves off, despite their ability to travel for extended periods without liquids.

Ostriches do not bury their heads in the sand when attacked, contrary to common belief, although they do push their heads and necks flat against the ground, maybe to escape observation.

Although the bird’s primary inclination is to flee or hide from danger, this does not mean the bird is without protection. The ostrich has a vicious clawed foot capable of killing a lion-sized predator. 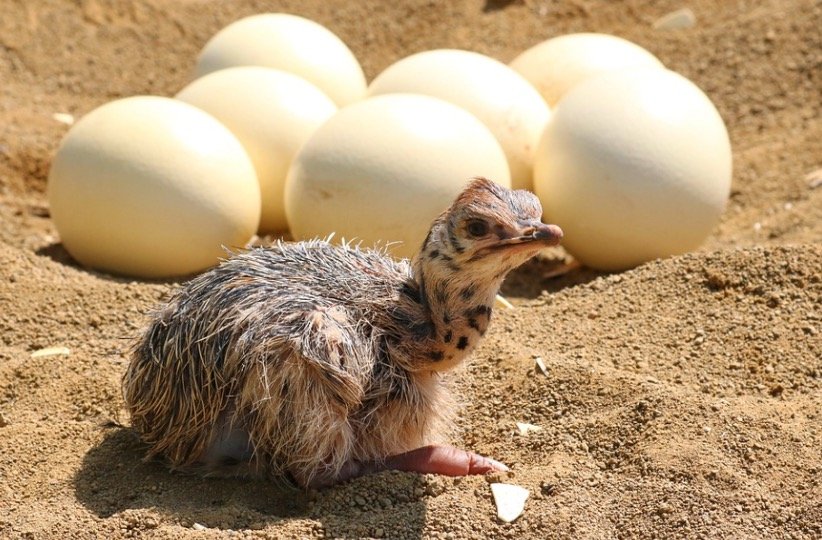 These birds have a mostly plant-based omnivore diet. To obtain as many nutrients as possible, this bird’s digestive track measures 46 feet long. It eats stones and sand along with its diet, then grinds everything up in the gizzard, a specialised organ.

These birds may choose several days without drinking a drop of water. Before it’s to drink again, it can lose up to a fifth of its weight in water. The bird’s include seeds, grass, fruits, and flowers in their daily diet. Insects, reptiles, and other flesh left over by carnivores are occasionally used to complement this.

Human hunting has been the best threat to those birds. In the 18th century, the ostrich was almost wiped out by the quest for its feathers. As ostrich farming became increasingly popular, part of the attractiveness of this method faded.

The ostrich remains threatened by hunting, habitat degradation, and possibly predation. Given its massive size, lions, cheetahs, leopards, hyenas, and African hunting dogs, among other predators, pose a threat to the bird.

Predators which attack nests for eggs include vultures, warthogs, and mongooses. Excluding the cheetah, numerous predators are unable to keep up with the ostrich’s remarkable speed, so they wait to ambush the naïve bird. 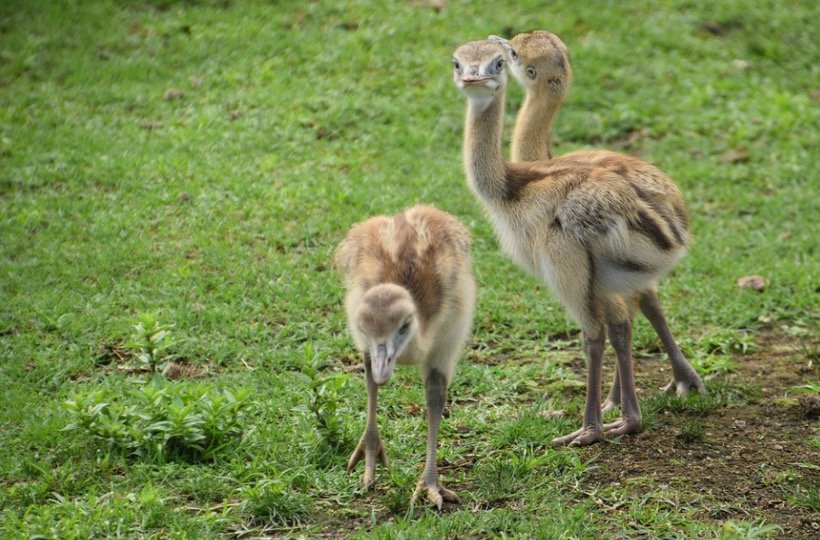 The mating season lasts from March through September annually. The male performs an intricate dance in which he seems to kneel to the ground and shake his feathers, one wing at a time, while his tail bobs up and down.

For the female to assess, the dance is meant to be a showcase of the male’s strength and health. The most territorial male will mate with flocks of three to five hens at a time, but only with the most dominant hen will he create a pair bond. Other males will also get a chance to mate with the remaining females.

All of the fertilised females will deposit their eggs in a common nest, which will be little more than a hole excavated in the ground. Given its massive size, lions, cheetahs, leopards, hyenas, and African hunting dogs, among other predators, pose a threat to the bird.

But all of the eggs have a higher chance of survival than if they were incubated separately. Each female bird may lay seven to ten eggs at a time, but the shared nest has the capacity to house up to 60 eggs.

These eggs are the biggest of any species on earth, weighing more than 3 pounds. They’re around the size of dinosaur eggs. Males and females rotate guarding the nest. During the day, the ladies of the group keep an eye on it, while the males take over at night.

The chicks will emerge from the eggs with stiff down, approximately an equivalent size as a chicken, after a 42- to 46-day time period . The parents will carry the chicks beneath their wings after they leave the nest to shelter them from the harsh sunlight or rain.

When challenged, the male will make a display of loud noises as well as an elongated neck to distract the assailant, while the females and chicks look for a safe place to hide. The baby bird develops swiftly, and by the time it is six months old, it is about the same size as the adults.

They mature sexually after three to four years, which is a considerable time in comparison to most birds. In the natural, these birds live for 30 to 40 years, while in captivity, they live for 50 years.