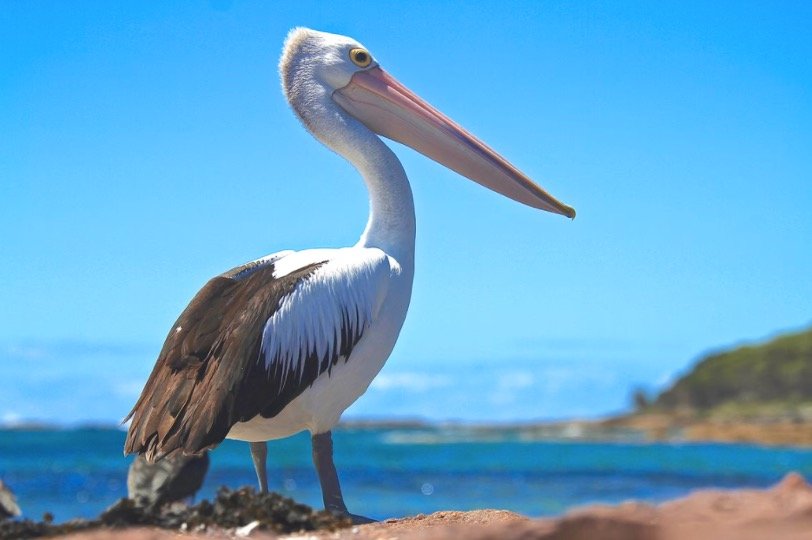 A pelican is an omnivorous creature belonging to the Animalia family, phylum Chordata, class Aves, order Pelecaniformes, and family Pelecanidae. Its genus is Pelecanus. Its height is up to 42 to 72 inches, it weighs up to 6 to 33 pounds, and it has a wingspan of up to 72 to 138 inches, with a lifetime of up to 16 to 23 years.

A pelican is a bird that feeds on fish, crabs, and turtles. Pouches hanging from the underside of the beak and keen eyesight are the most distinctive characteristics. Pelicans are preyed upon by humans, cats, and coyotes.

Physical features include grey, white, and black skin colorations, and feathers on the skin, with a top speed of 40 mph. 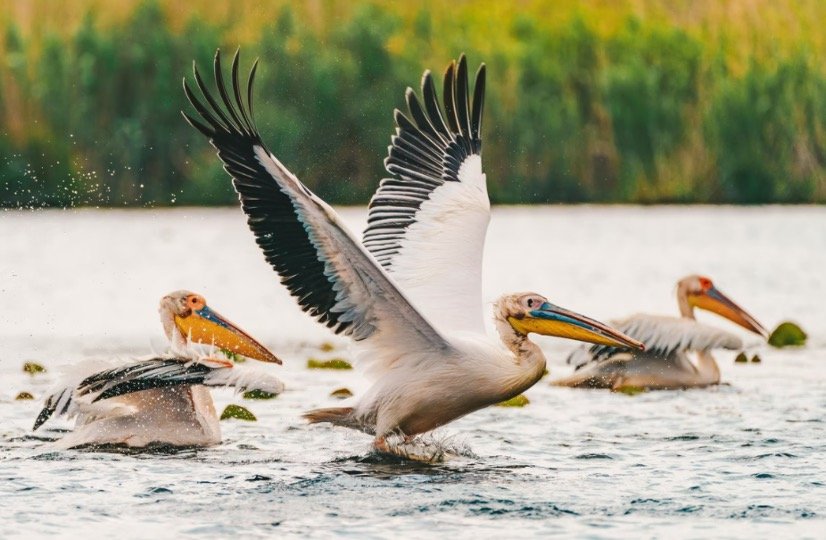 Pelicans have been a symbol of contemporary culture since mediaeval times, featuring in art and on coats of arms thanks to their characteristic stocky form and peculiar bills. These birds are notorious for consuming large amounts of fish, sometimes up to four pounds per day.

One of the lesser-known facts about pelicans is that they can fly at extremely high heights. These birds may be found on all continents except Antarctica, and they prefer warm areas near coastal or inland waterways like lakes and rivers, though they can also survive in temperate regions with defined seasons.

Pelicans live in zoos among cormorants, ducks, as well as other water birds. The San Diego Zoo Safari Park, which is the only zoo in North America to contain great white, Dalmatian, and pink-backed pelicans, houses them in some of the most famous displays. 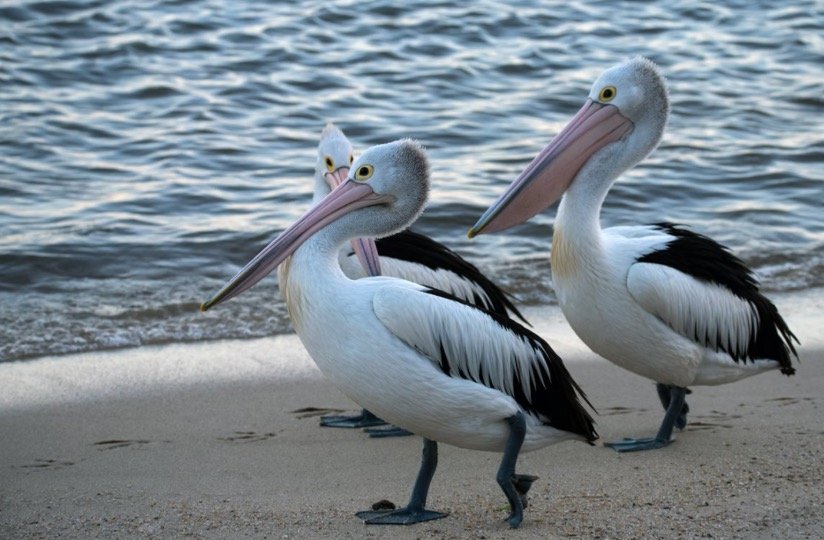 • The beak pouch can contain up to three litres of water, more than three times the capacity of this animal’s stomach.

• Only the brown pelican dive-bombs into the sea to capture fish, flying down from heights of 60 to 70 feet.

• Pelicans, despite their size, have air sacs in their bones that allow them to glide to heights of 10,000 feet while floating on warm air currents.

• Pelicans hunt in groups, slapping the water’s surface with their wings to propel fish into shallow water, where they may be scooped up with their beaks.

• Pelicans were widely depicted in mediaeval and Renaissance Christian art, owing to a legend that these birds stabbed themselves in the breast to feed their offspring. 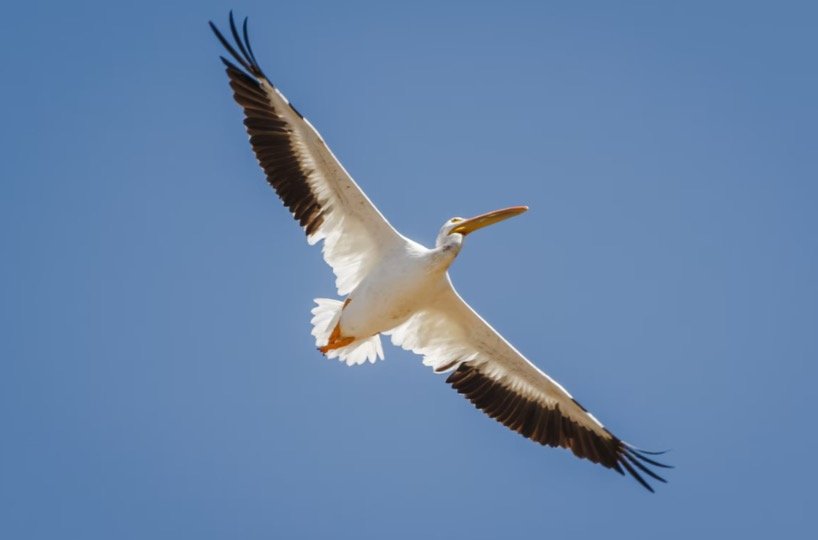 These birds are easily identified by their huge body sitting on short legs with a long wingspan, as well as their webbed feet, long necks, and, most famously, their distinctive beak and accompanying enormous pouch.

Their tails are small and square, but their wings are big and wide, allowing them to glide through the air. Except for brown and Peruvian pelicans, which have brilliant feathers, the majority of them have light-colored plumage.

During the mating season, all of these birds’ beak, pouches, and face skin become brilliantly coloured. The majority of them also acquire a knob on the upper section of their bills, which falls off after mating season is through. 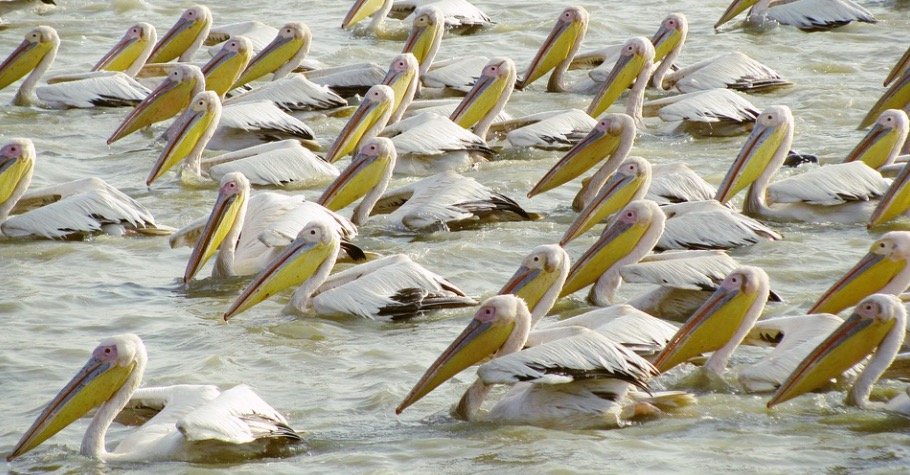 The beaks of these birds are the biggest of any bird. The beak of certain species can grow up to 18 inches long. The pelican’s most distinguishing feature is a huge pouch behind the beak known as a gular.

These birds usually utilise their unusual anatomy to scoop up fish and then drain the water that comes with their catch, but on hot days, some birds also use their beak pouch to cool themselves by swinging it back and forth.

A downward hook is also present on the upper half of the beak, which these birds utilise to catch fish. Male Australian pelicans have the world’s largest bills, measuring 1.6 feet in length.

These birds live in colonies of several hundred individuals and are exceedingly sociable. Brief, pod, pouch, squadron, and scoop are some of the names given to groups of these birds. They also like being in the company of other bird species, such as cormorants and flamingos.

They made nests in trees, shrubs, or on the ground, according on the species. They spend their time napping, sunning, or preening when they are not feeding. With their heads lying back on their shoulders, eyes closed, and feathers tousled against the cold, the bird will go to sleep at dusk.

These birds frequently migrate in flocks, either in a V shape or in a single line. Year round, both sexes stay together with their young. They usually only speak out when they’re in their breeding colony, grunting to show their joy.

Adults communicate by using their wings and beaks to make visual displays. Chicks are often extremely loud before they leave the nest, which is one of the more intriguing facts.

To convey their disgust, they hiss through gaping banknotes. To protect their area, some birds would clap their beaks while staring skyward, or gape, bow, and wag their heads. 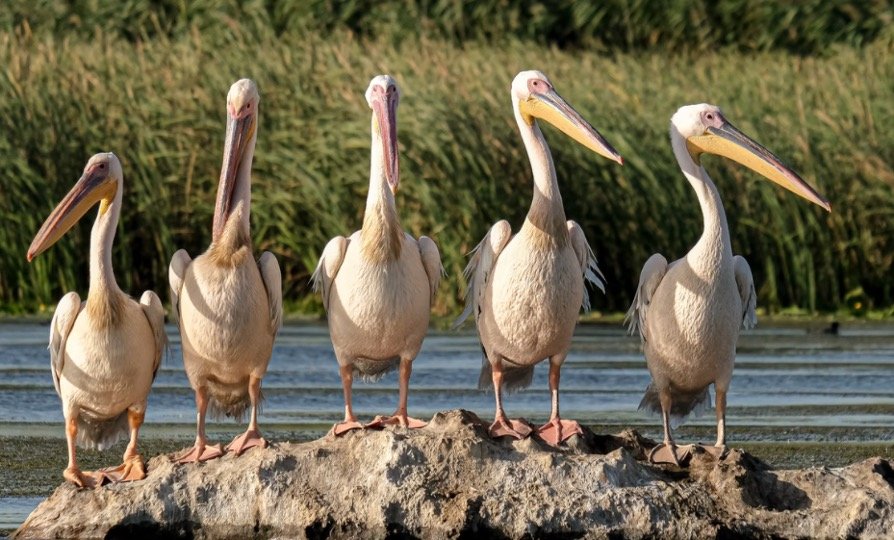 These birds are carnivores who consume mostly fish as a diet. Carp, shiners, mullet, and minnows are among their favourite fish, though preferences vary by species. Amphibians, crustaceans, insects, other birds, and even small mammals are all prey for them.

Pelicans can dine in groups or alone, although Dalmatian and pink-backed pelicans enjoy eating alone. Brown and Peruvian pelicans see their prey from tremendous heights before diving into the water to get it.

These birds have few predators due to their great size. Cats, as well as wild dogs and coyotes, are among their predators. Humans, on the other hand, pose the biggest threat to their survival.

Brown pelicans were nearly wiped off due to the usage of the chemical DDT in the twentieth century, which caused their eggshells to shrink. Development intruded on pelican breeding habitats as more people migrated to coastal regions.

The brown pelican population recovered when DDT was banned in 1972. They are no longer classified as endangered, although they are still considered vulnerable. Dalmatian pelicans, which are endemic to portions of eastern Europe near the Mediterranean and western Asia, are likewise threatened by humans as their wetlands habitat shrinks.

Recent conservation measures have aided in the stabilisation of their populations. Many species in densely populated places have grown reliant on humans for food, which pushes them to abandon hunting.

Pelicans who beg for food from humans are deficient in nutrition and are at danger of sickness. Others like to seek in regions where commercial fishers have strewn their nets and hooked their hooks.

Birds become caught in them, and some fisherman just cut them free without removing the netting or hook, putting the birds’ lives at peril. Pelicans are also threatened by oil spills, water pollution, and chemical dumping.

For a single season, these birds are monogamous. When it comes to mating, men employ a variety of strategies to entice females. Some pelican species can only mate during certain seasons, while others may mate all year.

During courting, males in several species change the colour of their pouch and neck feathers to attract females. Both sexes contribute to the construction of nests, which are often made of feathers, leaves, and sticks.

The courting ritual of ground-nesting species is intricate, with multiple males racing after one female. Males in tree-nesting species advertise for females in a more straightforward courtship.

Three to ten days before egg-laying, copulation happens at the nest. The nests are built by both males and females using feathers, leaves, and sticks. Depending on the species, females can deposit one to six eggs, which require 30 to 36 days to incubate.

Both parents stand on top of the eggs to incubate them. The eggs hatch in the sequence in which they were deposited, with the first chick being the biggest. Hatchling chicks emerge from the nest naked and pink, darkening to great or black within 14 days before being covered in white or grey down.

The feathers of immature pelicans are darker than those of their parents. Young pelicans eat by inserting their beaks into their parents’ gullets and retrieving regurgitated fish. Chicks begin to congregate in pods with other young birds when they are around 25 days old.

Parents are aware of their children and only feed them. At two months, they are venturing more afield and swimming as well as practising communal feeding. They leave the nest after 12 weeks, occasionally staying with their parents but seldom being fed by them.

Pelicans reach sexual maturity between the ages of three and four. In the wild, pelicans live for 10 to 30 years; the oldest wild species of this genus survived for 43 years.