You can find the rare axolotl salamander on the muddy bottoms of Mexico City’s lakes. Maintaining one of these is a breeze. Axolotls are members of the salamander family, however they spent their entire lives submerged in water, unlike other salamanders like the Tiger salamander.
As a result, you’ll need to provide them with a larger tank (at least 20 gallons) that meets their specific needs for temperature and water. The axolotl salamander is on the verge of extinction in its natural habitat. However, many of them are produced in captivity. 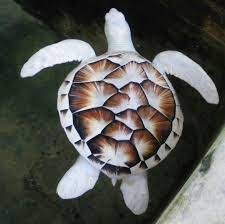 Translucent white with dazzling gold specks characterizes leucistic axolotls, which also have red or pink gills and dark brown or black eyes. They are one of the most abundant and stunning variants in zoos and aquariums but are extremely rare in the wild due to how quickly they can be detected by predators.

Albinos and this species share a lot of similarities in appearance, although albinos have red eyes.

Fewer melanocytes are created in people with leucism because of a mutation. Axolotls with this mutation do not exhibit the same patterns as the wild-type morph because melanocytes create the dark pigment melanin. 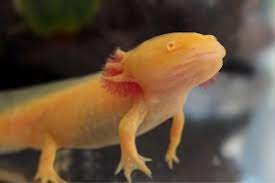 When young, golden albinos look identical to their white counterparts. They are extremely photosensitive, much like white albinos. In contrast, as they get older, their colour shifts from white to peach, then yellow, orange, and finally gold. therefore, Golden Albinos got their name for a reason.

Golden albinos typically have colorless, white, pink, or yellow eyes. And their peachy-pink gills are a sunny yellow color, and they’re covered with shiny, reflective dots and speckles.

Captive-bred golden albinos are a low-maintenance, low-cost option, costing only about $50 (not including the cost of their tank and food). 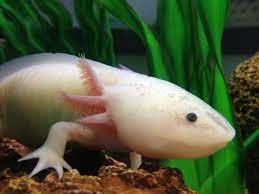 The albino variety of the axolotl is one of the most often seen induced color changes. The albino variant of the axolotl is distinguished by its all-white appearance, red gill filaments, and pink or white eyes, and is caused by a lack of melanin production. Melanin is responsible for skin colour and provides protection from UV radiation. The albino eye also lacks essential pigments. As a result, it is generally agreed that this morph is extremely photosensitive.

They would likely perish in the wild, but humans have bred more of them because of their unique albino appearance. If the offspring receives only one copy of the recessive albino gene, it will not cause any noticeable changes in skin tone. Several changes occur in an albino as they become older. Its body remains entirely white, but its gill stalks tend to deepen in color. 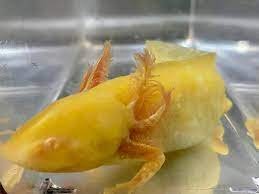 Different shades of peach, yellow, and orange-gold can be seen in golden albinos. Their bodies are covered in shiny patches and speckles, and their white, yellow, or pink eyes reflect light. Their gills are a pale golden color and have a peachy hue.

When young, they look identical to white albinos and share that population’s sensitivity to light. They don’t start turning golden in color until they’re quite old.

The golden albino morph of the axolotl, like the other pale axolotls on this list, lacks melanophores.

What sets this morph apart from others is that it still has xanthophores, giving it a distinctive golden yellow hue. Individuals with a high concentration of iridophores can give the impression that they are covered with gold leaf. 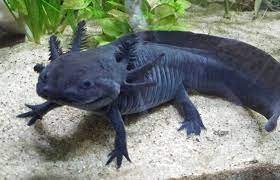 Many people confuse melanistic axolotls with their similarly-colored wild counterparts, but there are significant differences between the two types of axolotls. Their bodies are dark brown or black because they have more pigment in their skin than the wild type. These axolotls feature black gills and eyes, despite their solid colors.

Particularly dark coloring is caused by a recessive gene. Melanoid axolotls are matte black, but wild-type axolotls are glossy greenish or dark brown (no shiny specs). And even their gills are a dark shade of black. Adult melanoid axolotls typically have lighter underbellies and toes than they did as juveniles. 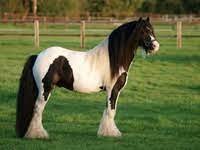 Piebald axolotls are genetically identical to Leucistic axolotls; both are white with red gills. They are easily distinguished, however, by their black eyes and black symmetrical patches on the back and face.

It’s unusual to find a piebald axolotl. This results in a price tag of close to $300. 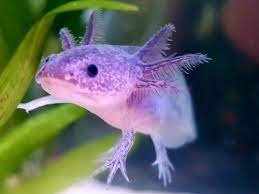 Mosaic axolotls have a variety of colors all over their bodies, including black, white, and gold. As an added visual feature, they might sport multicoloured eyes and gills with red and purple stripes. Parental melanin deficiency and albinism typically result in mosaic offspring.

They form when two eggs fuse into one. Each cell is not evenly divided, but rather randomly shows colors from both parents. In the end, the axolotl acquires a stunning and distinctive hue.

It is impossible to breed mosaics, so they must always be considered lucky occurrences. They are unusual and rarely offered for sale, but you never know when you might luck upon one. 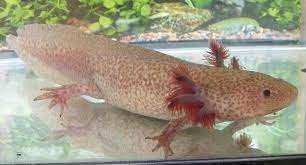 The axolotls known as copper axolotls are a rare albino variety that can be seen in a wide range of colors. They have crimson eyes and come in a spectrum of copper tones from light to dark. The majority of copper axolotls fall into one of three categories:

Shining a bright light into an axolotl’s eyes is one way to see if it is a copper or other morph. Identify an albino copper axolotl by its reddish-colored pupils. There is also the extremely uncommon Copper Melanoid axolotl, which can only be obtained by sheer chance. 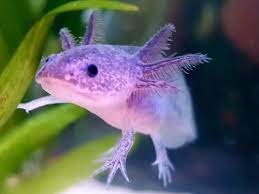 Lavender axolotls, because of their unique and attractive hue, are a popular morph in the United States. This axolotl variation is primarily grey, with very faint purple markings, red gill filaments, and black eyes. They are named Silver Dalmatians because their coats are typically coated in silvery grey patches.

It is not uncommon for these lavender axolotl morphs to undergo a color change from purple to grey or green. However, the fundamentals are still the same.

The distinctive coloration and speckled pattern of a lavender morph make it a highly sought-after pet. A lavender morph can be purchased for about $115, and they are primarily distributed in the United States. 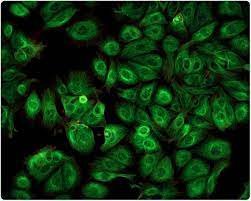 The discovery of the glow-in-the-dark axolotl could come as a shocking revelation. But they are not a joke. The green fluorescent protein (GFP) glows brightly under a black light, giving off a neon hue. However, these cute critters can’t handle being in black light for more than a few seconds at a time. Even under standard lighting, the GFP axolotls will seem somewhat green, and their eyes will give off a strong green glow.

In 2005, scientists at the Max Planck Institute artificially inserted green fluorescent protein into the axolotl population so that the animals would glow in the dark. On the other hand, they may now exist spontaneously in some species.

This genetically engineered axolotl morph was created for studies on tumour suppression and tissue regeneration. GFP axolotls can be purchased from a variety of sources for roughly $70, and they are widely available. 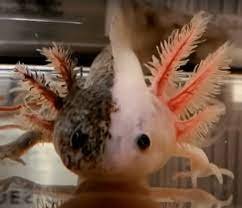 A chimaera is the offspring of a fertilized egg that has been merged with another morphed egg. This is why chimaeras are so uncommon in the wild and why most people have only seen them in zoos.

Having one morph on one side of their body and another morph on the other usually disqualifies them from being regarded as legitimate axolotl morph. We then cut the axolotl morph in half, down the middle, and to the right.

Interestingly, one side of the morph can develop noticeably more slowly than the other in some axolotls. Axolotls with chimerism are extremely rare and are never marketed commercially. 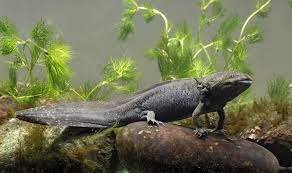 Some people may hear the word “melanoid” and assume that no axolotls come in any other color. However, “the absence of iridophores (shiny patches)” is what the axolotl encyclopedia defines as “melanoid.”

A special form of the black melanoid morph, the heavily marked melanoid axolotl is black with greyish purple dots.

Due to their rarity and obscurity, data on these colour morphs is scant.

They can be easily distinguished from common black melanoids thanks to the splotchy green and yellow colouring of their skin. Both in the wild and in zoos, they are extremely rare and fetch a price tag of about $75. 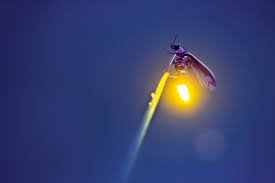 Lloyd Strohl invented the firefly axolotl, an artificially manufactured morph. Concerns have been raised concerning the ethicality of utilizing embryonic graphing to generate pets, given its controversial history as a tool for studying limb regeneration.

Because fireflies are so unusual, the feature has to be artificially generated in a lab.

These axolotls are wild-type axolotls, but their tails have been genetically engineered to emit a green fluorescent protein. Fireflies get their name from the fact that only some parts of the body would illuminate when placed under a black light. As with a firefly, only the tail of a wild kind with an albino tail will emit a strong green glow.

As with many other axolotl morphs, Enigma was bred in captivity for the purpose of scientific study by a passionate American hobbyist. As a result, they are unavailable anywhere else in the world except the United States.

The body of an Enigma axolotl is a dark grey, while its underside and toes are transparent. They have lovely golden eyes and a rosy gill coloration.

They frequently have a bright green and gold patch that is immediately eye-catching. The enigma axolotl is an offshoot of the original wild types.

Each and every axolotl variety deserves protection since they are all critically endangered. Therefore, it is the responsibility of the keeper or breeder to ensure that the axolotls’ environment is clean and that they are fed balanced food. 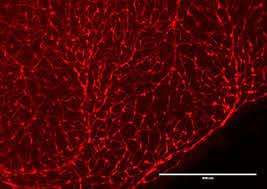 RFP axolotls, like GFP axolotls, have had an extra protein spliced into their DNA for scientific purposes (regeneration, immunity, etc.). It is possible for both GFP and RFP to coexist, albeit this is unusual.

The bioluminescent ability of RFP axolotls is the result of the presence of the Blue NFP gene (Nitro Fluorescing Protein) in their DNA. When exposed to cyan light, it emits a brilliant shine.

These axolotls may be forbidden to own as pets in your country due to their genetic modification. Do your homework before committing to buying one.

Exotic axolotl breeds have been discussed to exhaustion. If you’re interested in getting one for your own aquarium, after obtaining the necessary permit, I recommend contacting local breeders to find out what species are available and which you prefer.

If you really care about your morph throughout the rest of its life, you’ll give it plenty of room to explore and offer it nutritious live food (particularly live earthworms).