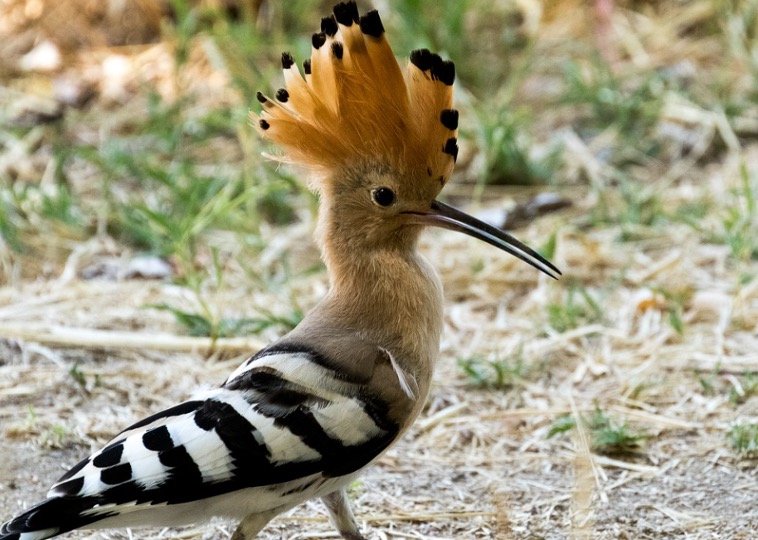 A Hoopoe is an omnivorous creature belonging to the Animalia family, phylum Chordata, class Aves, order Bucerotiformes, and family Upupidae. Its genus is Upupa. Its length is up to 10 to 12.6 inches, it weighs up to 1.6 to 3.1 ounces, and with the wingspan of up to 17 to 19 inches, with a lifetime of up to 10 years.

A Hoopoe is a bird that feeds on ants, grasshoppers, beetles, crickets, and other insects. Crest of feathers on the head is the most distinguishing characteristic. Hoopoes are preyed upon by cats and other large bird species. Physical features include feathers on the skin.

Its feathered crest, which resembles a huge mohawk, is its most striking characteristic. In the wild, it serves as a significant visual display and communication mechanism. 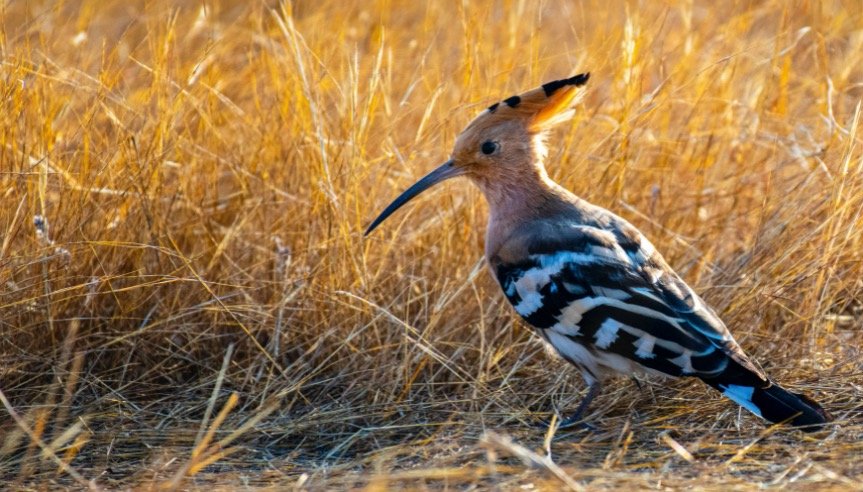 Except for the most harsh conditions of Siberia, the Sahara, and other semi-wastelands, the hoopoe has a vast range throughout most of the Eurasian and African continents. The African hoopoe’s range stretches from the Congo to much of the southern part of Africa.

The Madagascan hoopoe is nearly solely found on Madagascar’s island. By far, the most prevalent species is the Eurasian hoopoe. It is classified into seven separate subspecies based on geographical locations.

The epops subspecies may be found from Spain in the west to the Pacific Ocean in the east, and all the way down to India’s borders. Japan and southern China are home to the saturata subspecies. Ceylonensis is found mostly throughout the Indian subcontinent.

Longirostris may be found across Southeast Asia. All three subspecies, major, senegalensis, and waibeli, live in distinct sections of central and eastern Africa. Hoopoes like the temperate and tropical areas of these regions, where they may find woods, savannas, and grasslands.

They require a large amount of open area with scarce vegetation and trees, as well as cliffs or walls to live on. Unlike most bird species, which build intricate nests in trees, the hoopoe makes do with small cracks.

Hoopoe populations are healthy and widespread over most of their native habitat. According to the International Union for Conservation of Nature (IUCN) Red List, the hoopoe’s conservation status is the least concerning.

Hoopoes are thought to number between five and ten million in the wild. On the other hand, the population of the common Eurasian hoopoe may be declining significantly. Because of its extensive range, each subspecies may be subjected to a variety of settings and forces. 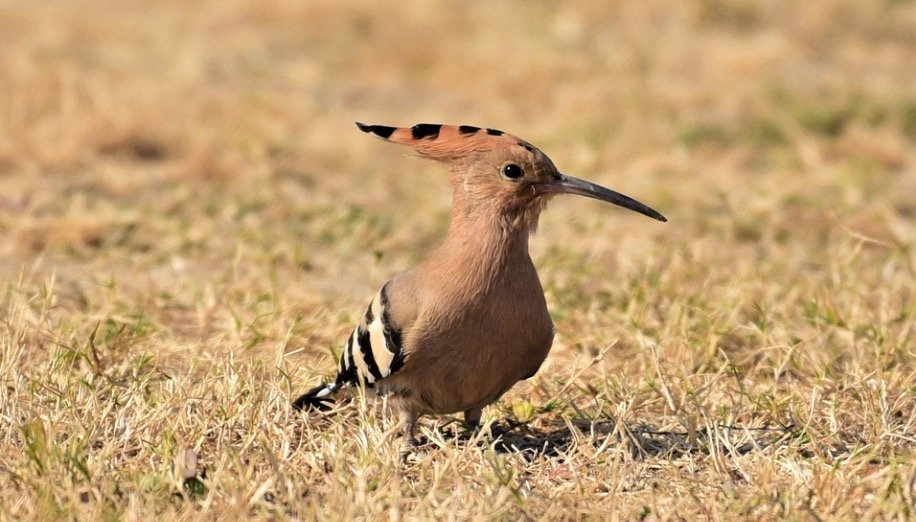 • All throughout human history, the hoopoe bird has played an important part in the folklore of many civilizations. Various religious scriptures, Egyptian hieroglyphics, Greek dramas, and Chinese literature all reference it.

• The hoopoe bird is said to have brought King Solomon to meet the Queen of Sheba in Jewish legend. It is presently Israel’s national bird.

• Hoopoes spread out backwards along the ground to take in the sun’s rays.

• To fight off danger, the hoopoe bird, like a skunk, may produce extremely unpleasant toxins.

• Hoopoes live in holes and cracks in vertical surfaces, both natural and man-made. 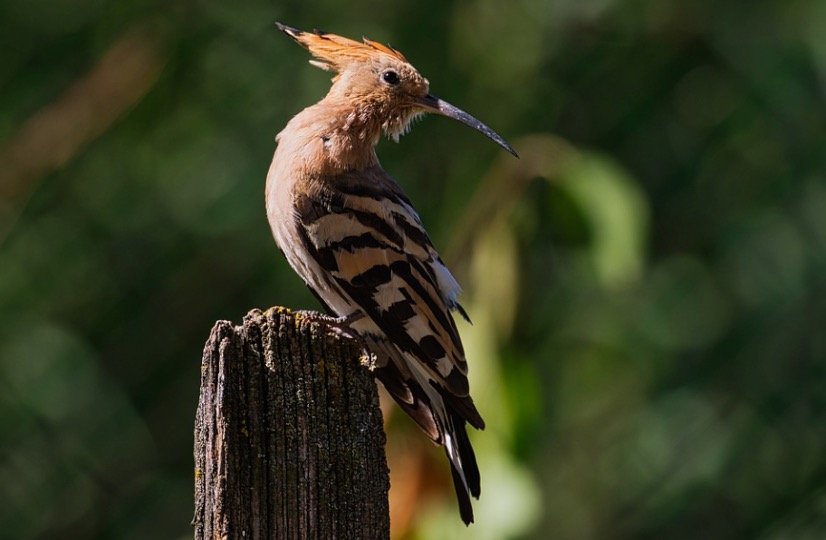 Upupa is the scientific name for the hoopoe genus. The name is taken from the bird’s distinctive vocalisation. The hoopoe’s taxonomical categorization is a point of contention. The African hoopoe (Upupa africana), the Eurasian hoopoe (Upupa epops), and the Madagascan hoopoe (Upupa marginata) are presently regarded to be the only extant species in the genus.

The African and Madagascan hoopoes were originally intended subspecies of the Eurasian hoopoe, but they were split apart and given their own species owing to anatomical and vocal characteristics. The Saint Helena hoopoe, a fourth species, is said to have gone extinct in the 16th century.

Upupa is the only extant genus in the Upupidae family, meaning there aren’t many birds like it. It is distantly related to wood hoopoes, hornbills, and ground hornbills, all of which belong to the same order.

The hoopoe is a small or medium-sized bird with a wingspan of 10 to 12.6 inches and a weight of up to three ounces — approximately the size of a book. It features black and white striped wings, a large and narrow beak, small legs, and pinkish plumage all around.

The brilliantly decorated crest on the top of its head is maybe its most distinguishing characteristic. With white spots and black points, the crest is red or orange in hue. The crest feathers are used to communicate the bird’s attitude to other species.

The feathers lie firmly on the head when the bird is calm and comfortable. When the bird is frightened or aroused, though, the feathers can be lifted to make it look bigger than it is. Hoopoes have a variety of interesting traits.

They flap their wings in a very irregular and uneven pattern that, more than other birds, mimics that of a butterfly. To kill their prey and eliminate any indigestible bits, they would thrash it against a hard surface. Through specialised glands, the animal may also create chemicals and oils that have a terrible odour to deter predators. 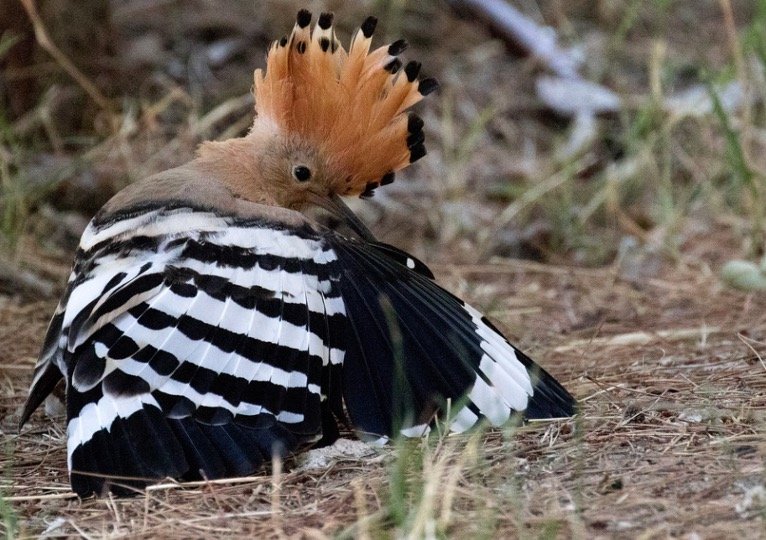 Hoopoes are primarily solitary species who prefer to hunt and feed on their own, with the exception of mating and child-rearing. They just have a few basic cries for cautions, mating, courting, and eating.

They make up for their lack of numbers with a variety of defensive strategies. Apart from the aforementioned substances, one of the most essential defences is the animal’s powerful break, which may be used as a lethal weapon against predators or members of its own species.

Males and occasionally even females may engage in a vicious aerial combat while battling for territory or mates, which can leave one terribly damaged or disabled. Hoopoes’ seasonal migrations vary considerably depending on their location.

After breeding, hoopoes from temperate Europe and Asia often move to Africa or southern Asia in the winter months. African hoopoes, on the other hand, spend the most of their time in the same territory throughout the year, however they may move about in search of bountiful food supplies or in reaction to periodic rain. Adults usually start moulting during the mating season and continue after migrating for the winter.

The omnivorous hoopoe eats a variety of things, including spiders, seeds, fruits, and even tiny lizards and frogs. Beetles, cicadas, crickets, locusts, grasshoppers, ants, termites, and dragonflies are among the most frequent insects eaten by hoopoes.

The bird will forage around the ground, digging out food from the soil. If it is unable to get food on the ground, it will hunt for flying insects in the air. When exploring for food in the ground, the powerful muscles surrounding the beak allow it to expand its lips.

The foraging procedure takes a great deal of effort; it will repeatedly turn over every little pebble or leaf in quest of small pieces of food.

In the wild, the hoopoe has just a few natural predators, such as cats and huge predatory birds. Humans have not historically posed a substantial danger to the hoopoe’s existence.

The hoopoe is given special protection in many nations because it consumes pests that are often considered a nuisance to us and our planted crops. It can also adapt to numerous environments and conditions because of its minimal environmental requirements and broad food range.

Hunting and habitat degradation, on the other hand, can place a strain on some hoopoe subspecies. 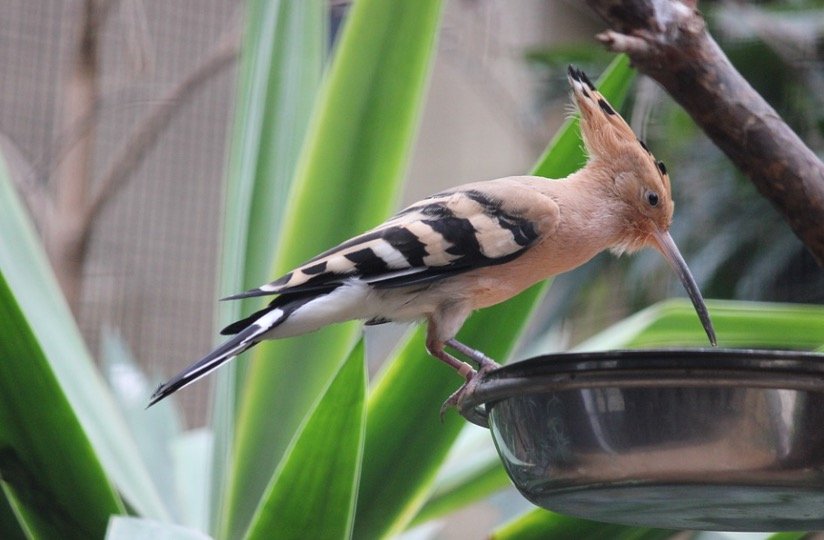 Hoopoes are monogamous birds, meaning they will only mate with one other bird for the duration of the mating season. Males will try to woo the female by presenting her with a gift of insects to eat. As previously noted, they will be aggressively competitive for mates.

The hoopoes will mate throughout their typical breeding season once they’ve found a spouse. Females have the ability to lay up to 12 eggs at a time. Northern species have bigger clutches, whereas those closer to the equator have smaller clutches.

Females normally create one egg every day for as long as they need to, then begin incubating them right away. Chicks hatch at varied periods since the incubation period lasts 15 to 18 days.

This chemical is supposed to keep predators at bay while also having the capacity to kill parasites and dangerous microorganisms. Until the chicks leave the nest, this excretion will continue.

When left on their own, the chicks aren’t completely vulnerable. They will gain the capacity to spray excrement at a hostile animal shortly after hatching. To ward off predators, they would strike out with their bills while generating a hissing sound.

The chicks normally have a fluffy white down covering their entire body when they are hatched. A month into their existence, they will have grown their entire set of feathers. In the wild, a hoopoe has an average lifetime of around ten years.