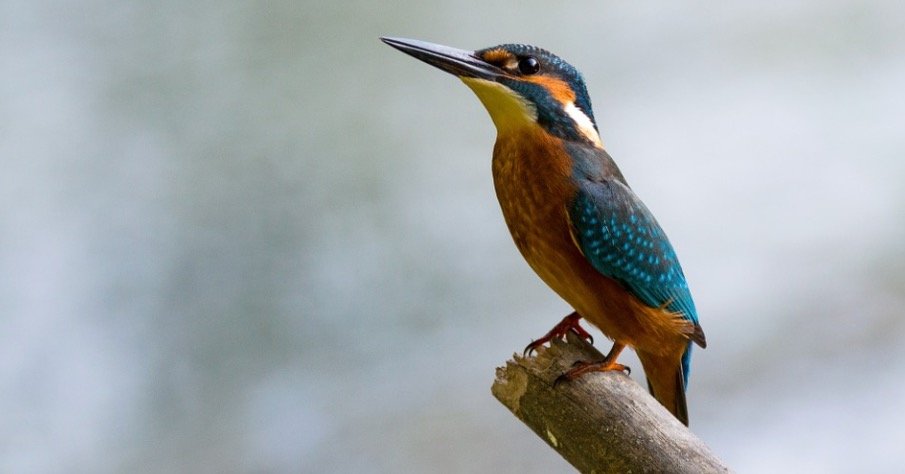 A kingfisher is an omnivorous creature belonging to the Animalia family, phylum Chordata, class Aves, order Coraciiformes, and family Alcedines. Its height is up to 4 to 15 inches, it weighs up to 0.4 to 6 ounces, and it has a wingspan of up to 2 feet, with a lifetime of up to 6 to 10 years.

A kingfisher is a bird that feeds on insects, tadpoles, fish, and shrimp. The small body and long, sharp, straight beaks are the most distinctive characteristics. Kingfishers are preyed upon by foxes, snakes, and raccoons.

Physical features include yellow, brown, red, blue, green, black, and orange skin colorations, and feathers on the skin, with a top speed of up to 25 mph.

The kingfisher is a colourful and strange bird that lives in the vicinity of rivers and bodies of water all around the world. The kingfisher stands out from the crowd thanks to its bright plumage and loud, strident cries.

They are frequently seen sitting in trees, scarcely moving. When they spot prey, though, they leap into action and swoop down to seize it. The kingfisher family has a staggering amount of diversity. 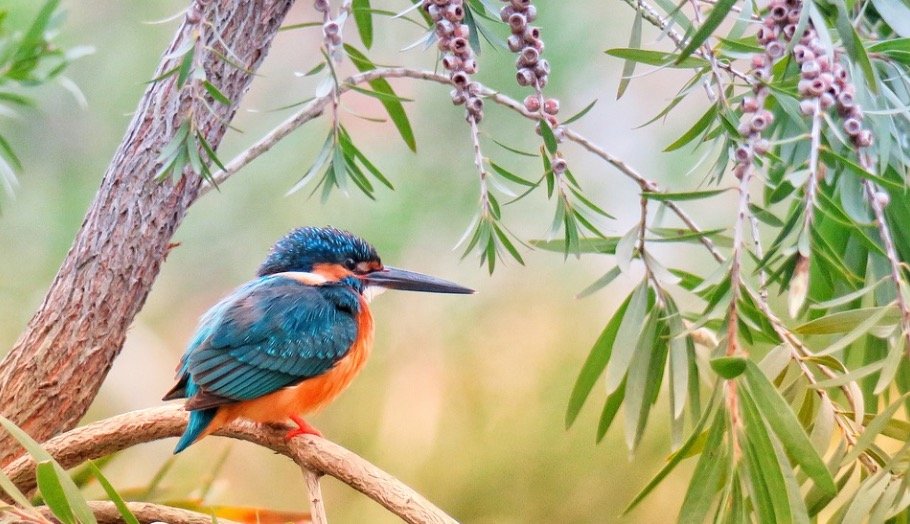 Except for the most severe polar and desert regions, these birds can be found practically anywhere on the planet. Tropical locations such as Africa, South Asia, Australia, and the remainder of the Pacific appear to have the highest concentration.

The majority of species may be found around rivers and lakes. The kingfisher has an uncommon habit of digging tunnels in banks, tree holes, or termite mounds, which is rare for birds.

The parents will have dug a 3 to 6.5 foot long trench with a nesting chamber at the end of roughly a week of excavating soil with their feet. The kingfisher family is in good health as a whole. Conservation groups consider the majority of species to be of low concern.

With 700,000 to 1.4 million adult individuals in the wild, the common kingfisher is possibly the most ubiquitous species. The kingfisher, both big and belted, is a tough bird.

However, some of the world’s rarest kingfishers, such as the Marquesas and Tuamotu kingfishers, which both live on small Pacific islands, are critically endangered.

The Micronesian kingfisher is the most endangered of them all, having gone extinct in the wild. There are only around 150 individuals in captivity, with several at the San Diego Zoo. 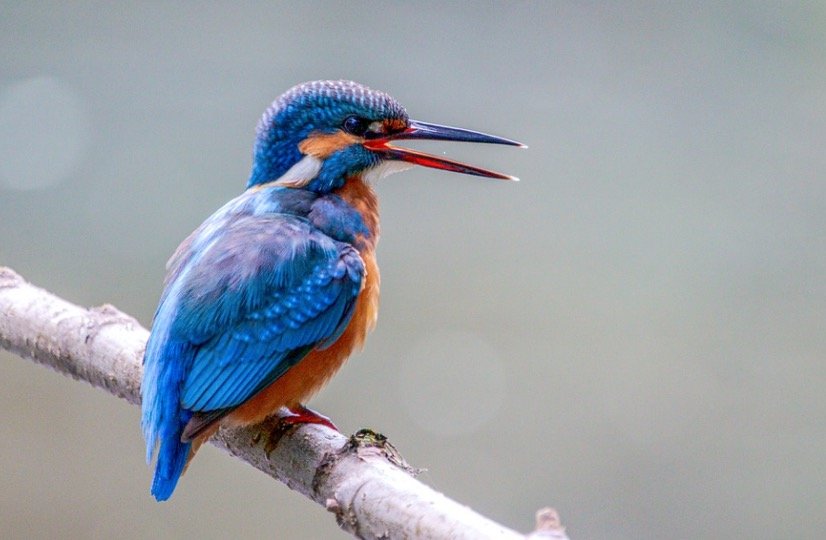 • Many intricate mythologies about the kingfisher bird were created by the ancient Greeks. The mythology of the “halcyon days,” which refers to the peaceful time of bright weather at the winter solstice, is among the most well-known.

• According to Greek mythology, the god of winds calmed the weather so that a kingfisher named Halcyon might lay her eggs in peace. Because the kingfisher does not reproduce in the winter, the origin of this nest is unknown.

• Because they spend so much of their time perched in trees, kingfisher birds have incredibly powerful legs.

Alcedinidae is the etymology of the kingfisher family. The Latin word for the bird, alcedo, inspired this scientific name. There are now 90 species of kingfisher, which are divided into three groups: real fishing kingfishers, forest kingfishers, and New World kingfishers. The whole kingfisher family is closely connected to the Coraciiformes order, which includes bee-eaters, rollers, and motmots. 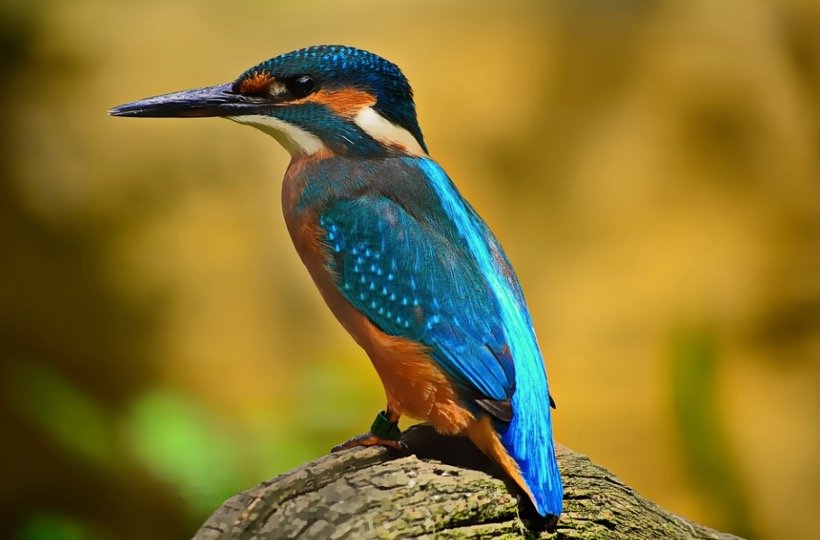 The kingfisher appears to have been assembled in a laboratory in an unusual manner. It features a huge head, robust feet, and a dagger-like beak, all of which are coupled to a short, compact body with a stubby tail.

The African dwarf kingfisher is the smallest species, at 4 inches long, while the gigantic kingfisher and laughing kookaburra, with a 2-foot wingspan and 18-inch body, are the biggest. The plumage is generally a mix of vivid blue, green, orange, or red, with a variety of patterns and stripes.

On the skull of certain species, there is also a conspicuous crest. Small social groups, such as mating couples or families, are preferred by these birds. It communicates with each other via a variety of vocalisations like as clicks, whistles, screams, and chirps.

The laughing kookaburra, a native of Australia, has the most amusing sound of all the animals. This call sounds like a loud chuckle, as the name indicates. The kingfisher also devotes a significant amount of effort to maintaining its cleanliness.

It will dive into the water to clean itself and then brush its bill on a branch to keep it clean. In general, these birds rarely wander far from their home range. They value their home range so much that they will actively protect it against intruders. 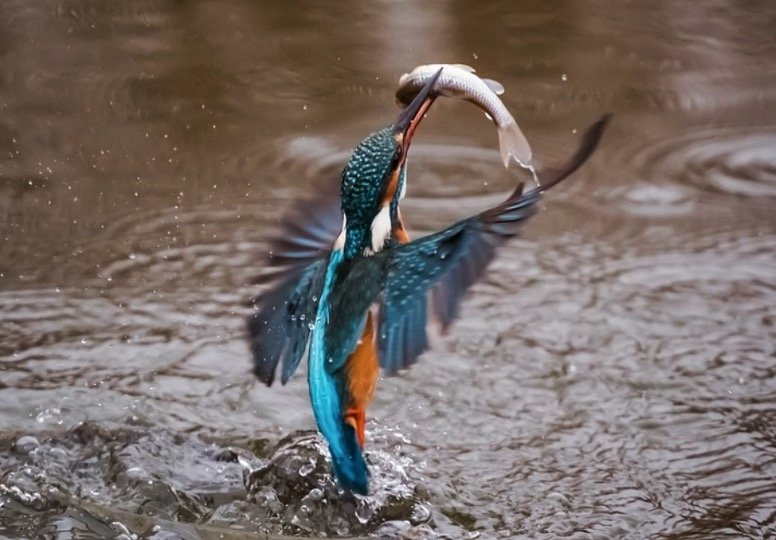 Although this bird is omnivorous, it appears that it has evolved mostly for hunting and eating flesh. Its preferred method of hunting is to examine the area from a stalk or tree limb, then swoop down on unsuspecting prey.

If the prey is still alive and struggling, the kingfisher may subdue it by slamming it on the perch. The kingfisher’s insatiable hunger allows it to consume food that is larger than its total body.

As part of the prey is processed in the stomach, it will occasionally poke out of the jaws. Despite their name, most varieties are not only focused on fish. Insects, snakes, skinks, spiders, crabs, mice, scorpions, berries, and even smaller birds are all prey for them. The particular diet is determined by the food availability in the area. 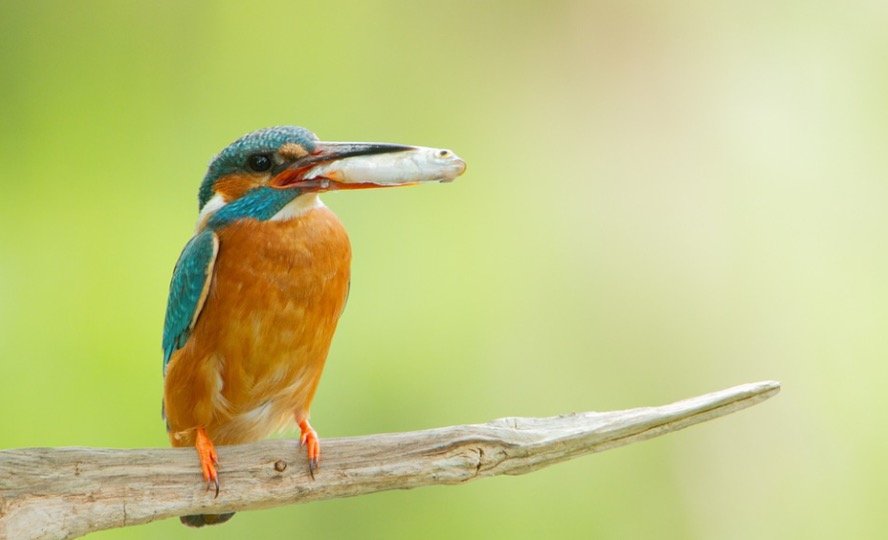 Natural predators, habitat degradation, and imported non-native predators all pose risks to these birds in the wild. In the wild, an adult bird has just a few natural predators. Most animals can’t see it because it flies past trees or dives into the water.

Only swift and nimble birds of prey can generally keep up with it in the air. Raccoons, skunks, dingoes, foxes, snakes, mongooses, and chimps are all known predators of kingfisher eggs, which are significantly more susceptible.

The breeding season for these birds can occur at any time of year, although temperate kingfisher species prefer spring and summer. Aerial chases, reciprocal feeding, and attention-getting displays of love are all part of the courtship ritual.

Because these birds frequently pair for life once they find a partner, this helps to reinforce their commitment. The female will lay one egg every day after the partners have copulated until she has produced between two and ten eggs in the nest.

Depending on the circumstances, a couple can produce up to four broods in a single year. Because the baby chicks emerge from the eggs blind and defenceless, the parents are invariably involved in their offspring’s development.

The laughing and blue-winged kookaburra species’ older youngsters may assist their parents with caretaking chores. The chicks will eventually grow their flying feathers after three to eight weeks.

They don’t have much time to master the intricacies of flight before their parents push them to leave the nest. In the wild, life expectancy ranges from six to fourteen years, depending on the species.