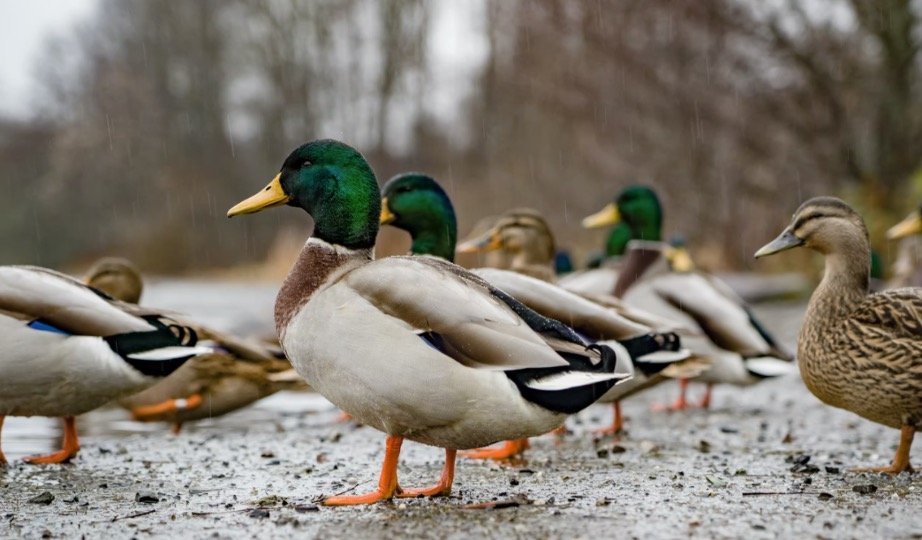 A mallard (Anas platyrhynchos) is an omnivorous creature belonging to the Animalia family, phylum Chordata, class Aves, order Anseriformes, and family Anatidae. Its genus is Anas. Its length is up to 20 to 26 inches, it weighs up to 0.084 pounds, and it has a wingspan of up to 2.7 to 3.2 feet, with a lifetime of up to 5 to 10 years.

A mallard is a bird that feeds on vegetation, insects, worms, and snails. The iridescent green or blue-headed plumage of the male is the most distinctive characteristic.

Mallards are preyed upon by red foxes, coyotes, wild cats, and numerous birds of prey. Physical features include brown, grey, green, orange, and white skin colorations, and feathers on the skin, with a top speed of 60 mph.

The mallard can go hundreds of kilometres a day with the right tailwind. The mallard is the most well-known and recognised duck on the planet. It is a species of dabbling duck that eats on the surface of the water and may be found virtually anywhere in the Northern Hemisphere with a suitably large body of water. The duck has a long and complicated history in human civilization as a food source, a hunting target, and even a pet. 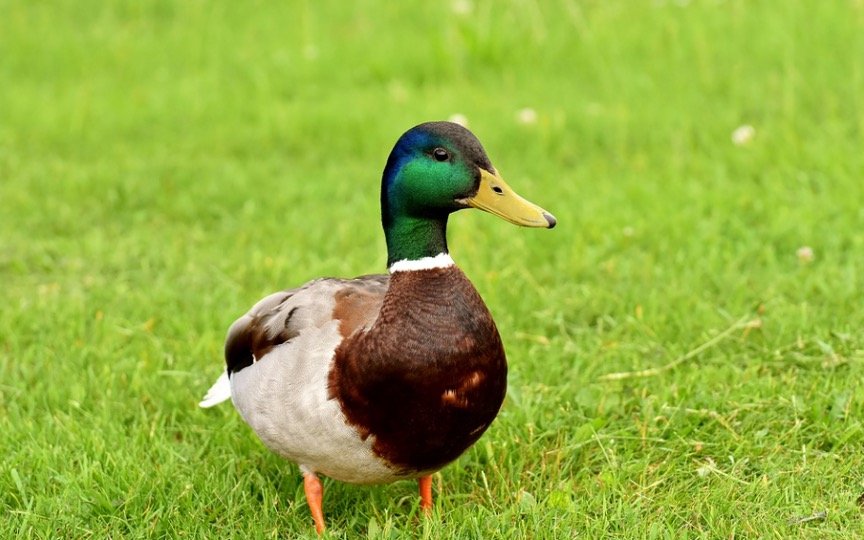 Mallards live across the Northern Hemisphere. North America, Europe, Asia, and northern Africa are all part of its native range. Australia, New Zealand, and South America have all received them. Their favourite environments are lakes, ponds, streams, and wetlands.

Mallards hide their nests in thick foliage near the water, where they dwell and eat. Although the exact number of mallards in the world is unknown, it is probably definitely one of the most common birds. The numbers appear to be increasing at the moment.

• The recognisable duck quack is really the female’s call to her ducklings, who spend the first few years of their life trailing behind their mother.

• The mallard is the ancestor of almost all domesticated ducks. The ancient Romans, Egyptians, and Chinese all kept domestic ducks.

• Cooked duck, like foie gras in France and Peking duck in China, is considered a delicacy in many countries.

• One of the most interesting aspects of the duck is that it appears to easily hybridise with closely related species. This is an issue for rarer duck species, such as the Hawaiian duck, which may be displaced or swamped by hybrids. 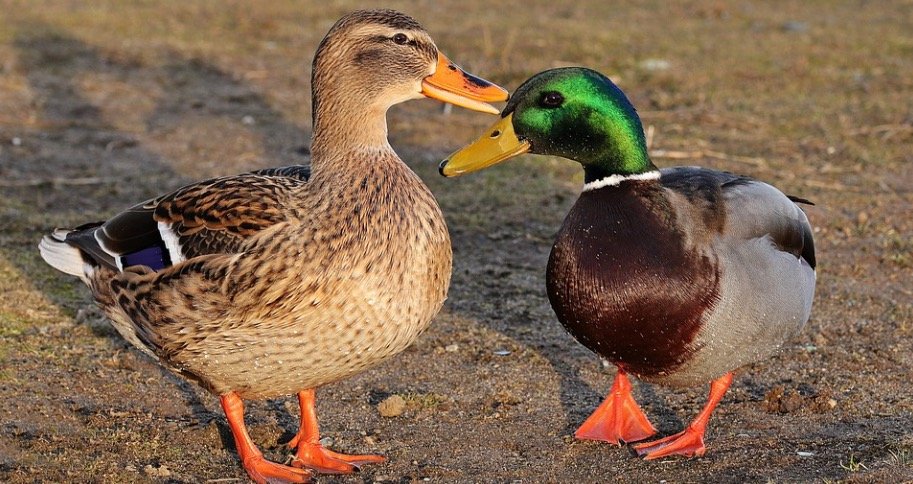 Anas platyrhynchos is the etymology of the mallard. Anas, which is Latin for duck, is a genus of 31 or so diving ducks that may be found all over the world. Platyrhynchos is made up of two ancient Greek words: platus, which means wide or flat, and rhunkhos, which means beak.

The mallard is a medium-sized bird with a long neck, rounded head, webbed feet, and a sturdy body, averaging 20 to 26 inches in length. This species has a high degree of sexual dimorphism, which means that the sexes are very diverse in size and colour.

The male has a striking green or blue head, a white ring around the neck, brown wings and breast, a grey body, and additional green hues on the back of the wings.

The female, on the other hand, has a light brown body with dark brown markings or stripes on the wings and top of the head. The bills and feet of both sexes are yellow or orange.

The mallard is a highly sociable animal that forms big flocks of varied sizes to feed and roost together outside of the mating season. Mallards interact with one another via a variety of vocalisations and body language.

When confronted with a threat, the mallard will initially exhibit an open beak before pressing its chest against the intruder. The ladies do most of the quacking, while the males are normally mute until they are fighting.

The mallard duck is a common sight in the northern hemisphere. Mallards from the north migrate hundreds or thousands of kilometres south during the winter. 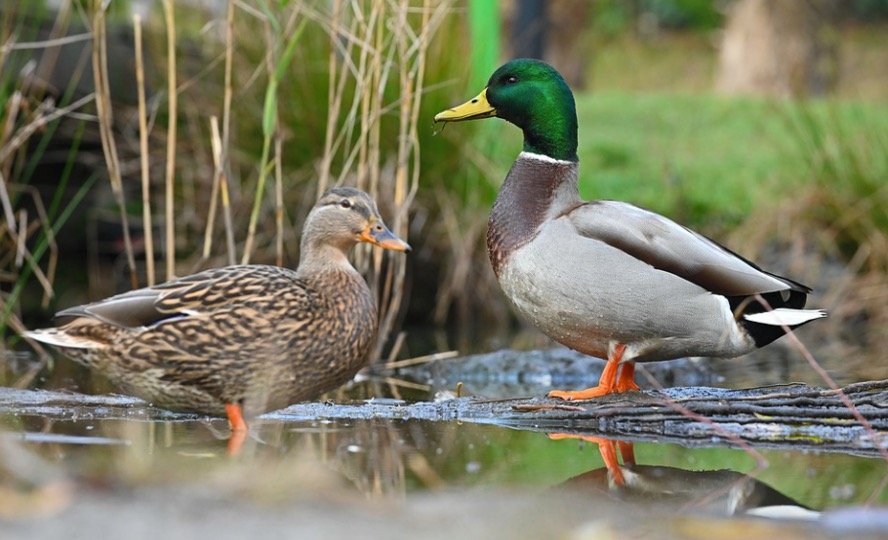 The mallard is an omnivorous bird that eats a variety of foods. It feeds by tipping forward in the water and eating anything just beneath the surface, a technique known as “dabbling.” Insects, worms, snails, and slugs, as well as other types of plants, make up the mallard’s diet. Basically, it will devour practically anything if the opportunity arises. 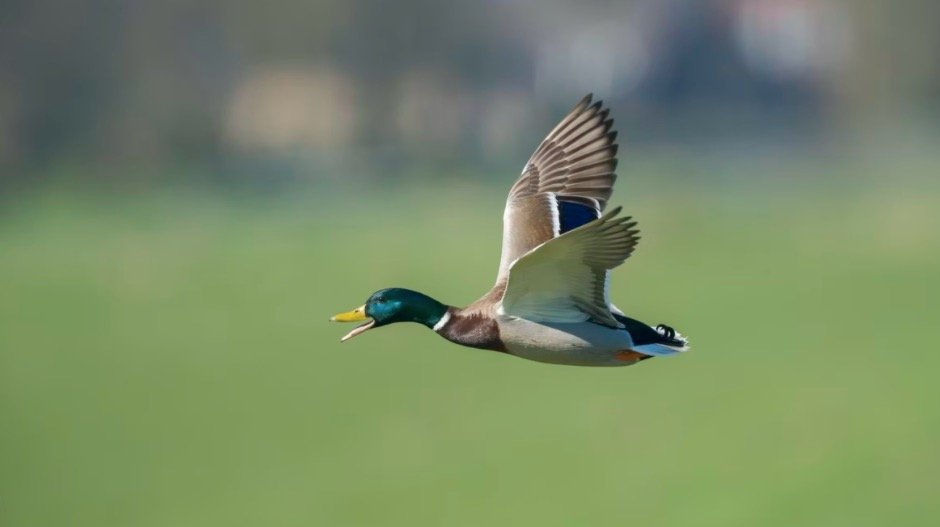 The IUCN Red List now classifies the mallard as a species of least concern. Despite being hunted in the millions for sport every year, they appear to breed quickly enough to keep their numbers stable.

The loss of their native wetland habitats is another big threat to them, but they appear to have adapted well to man-made ponds and lakes. Red foxes, coyotes, wild cats, and a variety of birds of prey prey on mallards.

Raccoons, opossums, skunks, turtles, weasels, huge fish, and a variety of other creatures prey on the eggs and young chicks.

The mallard’s mating season can begin as early as October and run until March, depending on its area. By swaying his head from side to side or rising up in the water while flapping his wings, the male begins courting.

By swaying her head back and forth or paddling through the water with her head kept low, the female stimulates this activity. When the pair returns after their yearly migration in the spring, they normally start nesting.

During breeding, the blue-headed male will use his beak to stabilise the female’s neck. The male mallard’s corkscrew-shaped penis is one of his more remarkable characteristics. The duck’s genitals are said to have developed as a result of a long sexual battle.

Because the duck’s reproductive season is so competitive, males have evolved techniques for depositing sperm considerably further than their reproductive competitors. When you contemplate that many birds don’t even have visible penises, this is really odd.

The female lays a clutch of 5 to 15 eggs after copulating. Before they hatch, she incubates them for up to a month. The tiny ducklings trail their mother and never return to the nest.

They are golden and dark brown in hue, and after a month or two, they begin to change. The duckling takes around three or four months to master the technique of flight. This arrives just in time for them to embark on their perilous migration.

They’ll likely return to the same area year after year after they’ve perfected the path. The mallard has a lifetime of five to ten years. Predators, or human hunters, prey on many of them. On the other hand, the oldest known mallard lived to be roughly 27 years old.