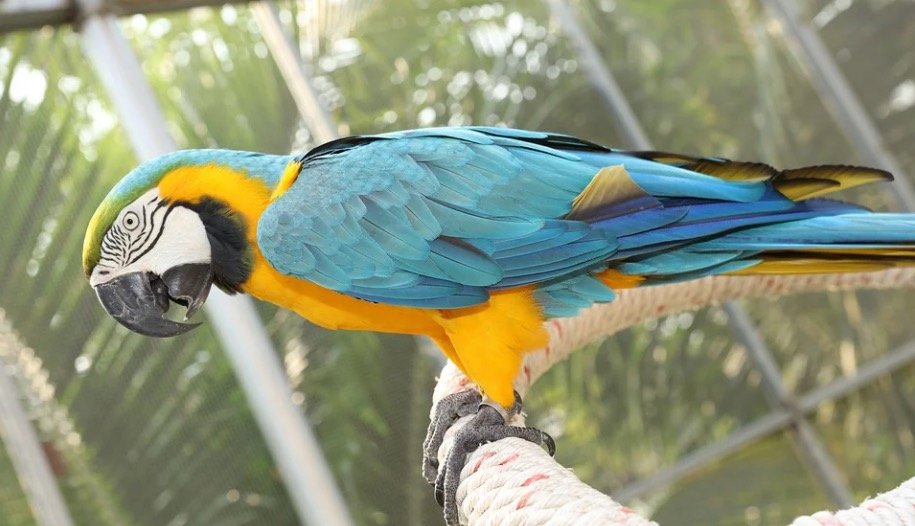 A parakeet is an omnivorous creature belonging to the Animalia family, phylum Chordata, class Aves, order Psittaciformes, and family Psittacidae. Its length is up to 3 to 16.5 inches, it weighs up to 1.06 to 3 ounces, and with the wingspan of up to 12 to 19 inches, with a lifetime of up to 6 to 30 years. A parakeet is a bird that feed on insects, etc. Their feathers, which come in many bright colours are the most distinctive characteristics.

Parakeets are preyed upon by very few species which are unknown. Physical features include blue, grey, yellow, albino, green, and white skin colorations, and feathers on the skin, with the top speed of 22 mph.

For hundreds of years, people have been enchanted by the small parakeet’s intellect, liveliness, and colourful plumage. Not only that, but they’re also low-maintenance and inexpensive.

Budgerigars may be found in Australia’s drier ecosystems, whereas rose-ringed parakeets can be found in cities and have become invasive in places like London. Grasslands, farming, woodlands, and wet areas such as bogs and swamps are also home to these species.

They are native to South America and Asia, in addition to Australia. The Carolina parakeet, which had beautiful green, yellow, and orange plumage and was now extinct, was a unique bird endemic to the United States. 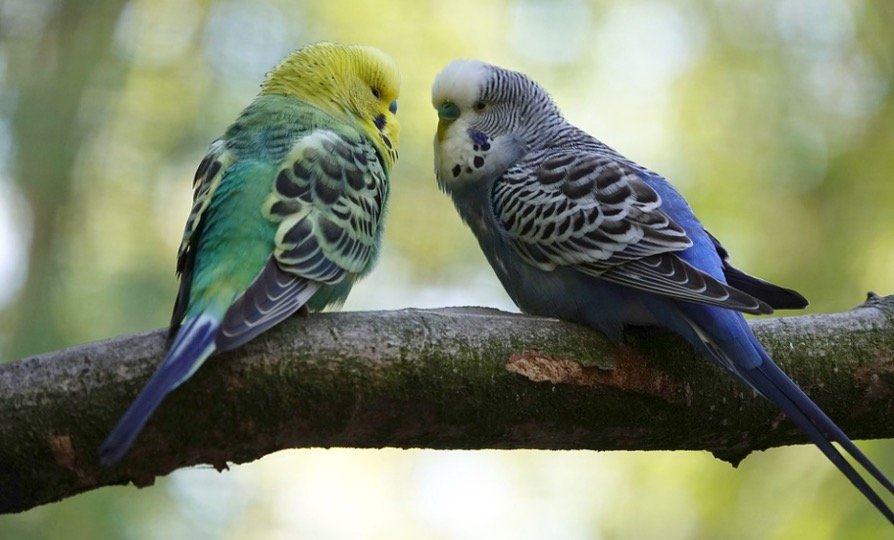 • The majority of mature birds are safe from predators. To ward off predators, the rose-ringed parakeet emits soothing purring noises.

• In California, owning a monk parakeet is banned, despite their popularity as pets.

• A female may lay an egg without a male, much like a chicken, but the egg is sterile.

• After dogs and cats, the budgie is the third most popular pet. 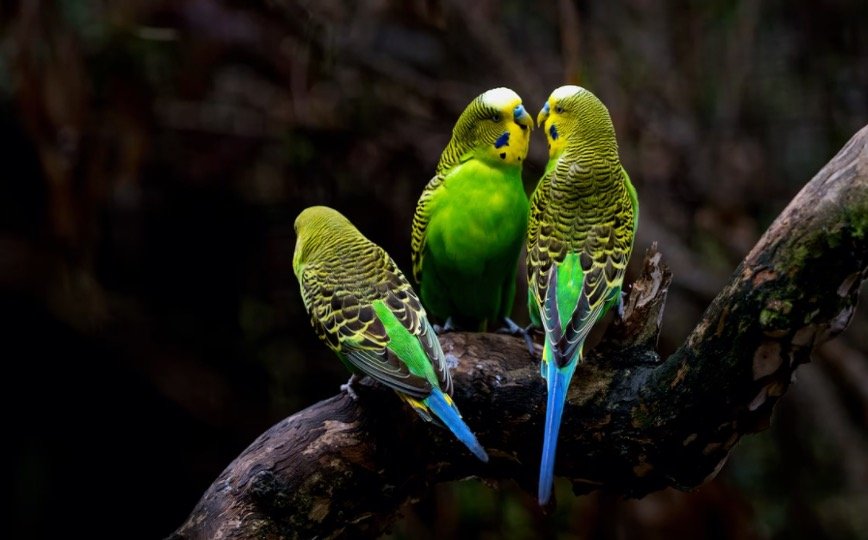 There are multiple genera within the family and subfamilies. Melopsittacus is the genus name for the common budgie. The Pyrrhura genus includes the green-cheeked parakeet, Todd’s parakeet, blue-throated parakeet, and blaze-winged parakeet.

The rose-ringed parakeet, like the Mauritius -, Newton’s -, and plum-headed parakeets, belongs to the Psittacula genus. 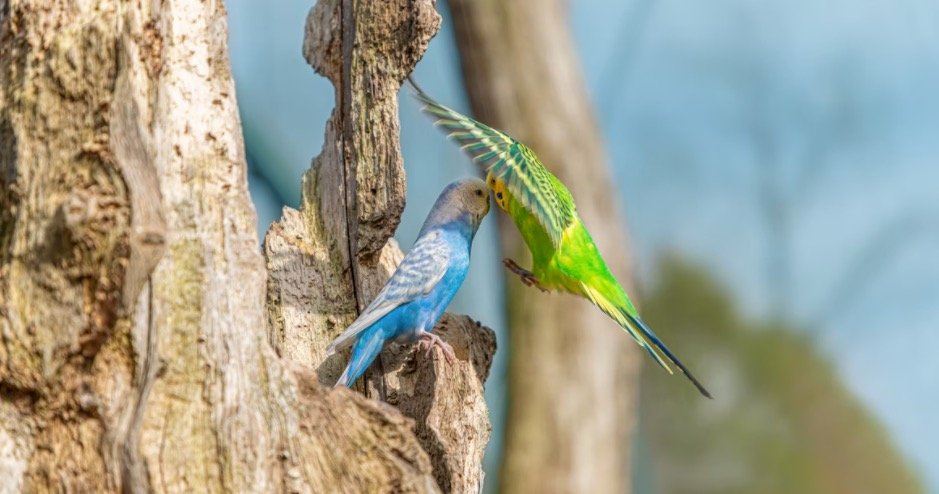 Small to medium-sized parrots make up the majority of this species. They are granivores who are lithe and have long tails. Their plumage is typically vividly coloured in tones of green, blue, yellow, or orange, and is far from plain.

Some animals, such as albino, have been bred to exhibit fancy and uncommon colorations. An albino is a bird that is not only white, but also lacks normal pigmentation and typically has pink eyes. The colour of the cere, which is the fleshy patch at the top of the upper bill, distinguishes male and female Budgerigars.

The female has a brown coat, while the male has a blue coat. Gregarious, friendly, monogamous, and lively, these birds are well-known. Hundreds of thousands of birds can form flocks that fly from their roosting grounds to regions where there is plenty of food.

Many wild birds are not afraid of people and may happily sit on their heads or eat food from their hands. They’re also known for making a wide range of noises, yet when they’re feeding, they’re remarkably silent.

When roosting or flying parakeets make noises like squawks, screams, whistles, wheezes, chuckles, chirps, and chattering, they may be rather noisy. Budgies have the ability to mimic human speech. 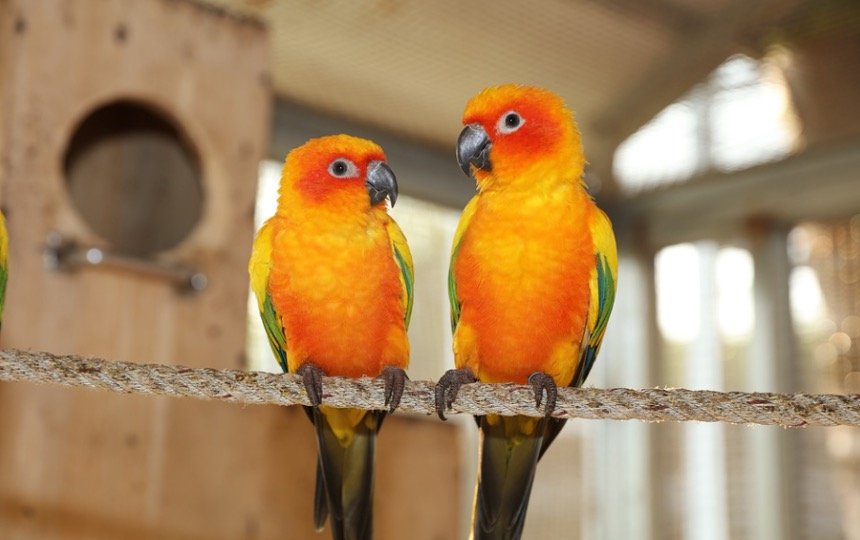 These birds are granivores, meaning they consume primarily seeds. Fruits and nuts, flowers, and the occasional bug and insect larvae are also taken. On the other hand, flocks of birds may occasionally devastate farms by stealing crop seeds such as maize or wheat.

Interestingly, these birds have few predators. The reason for this, according to biologists, is that they fly in such vast flocks that predators are either confused or terrified away when a bird spots them and emits an alarm cry.

They are, nevertheless, susceptible to illnesses and parasites. Carelessly produced pet birds can inherit genetic abnormalities, and if they are not carefully cared for, a captive bird’s lifetime can be shortened.

Neglected green-cheeked parakeets are prone to this. In the wild, these birds may live for up to 30 years, but in captivity, their lifetime might be as brief as ten years. 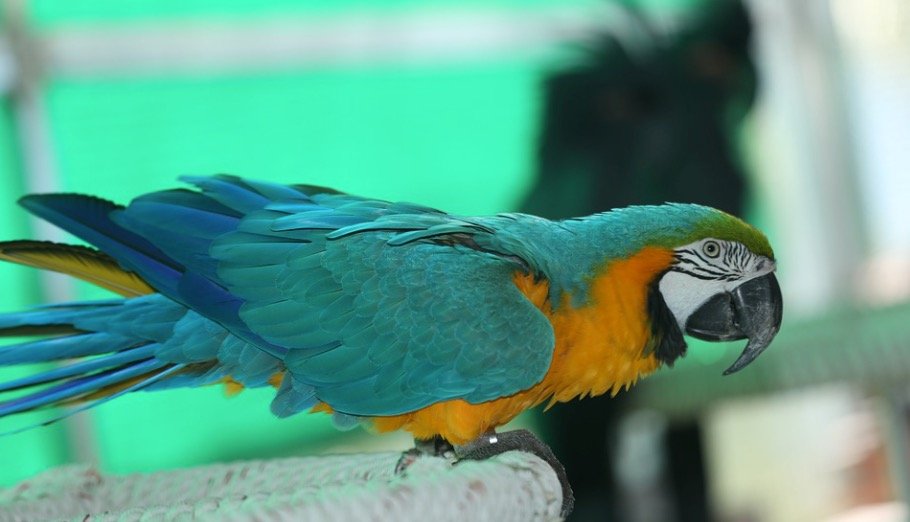 Excluding the monk parakeet, these birds do not build their own nests and instead rely on a nesting box, nests that have previously been used by other animals, or nests in tree cavities.

Monk parakeets construct a sophisticated communal nest that resembles an apartment building, with each couple having their own apartment with rooms for various purposes. The majority of animals are monogamous.

Each clutch consists of three to eight eggs laid by females. In other species, like as the budgie, the female is solely responsible for incubating the eggs while the male is responsible for feeding her.

Parents take turns in other species, such as the green-cheeked parakeet. A nesting box is a popular choice among pet birds. At initially, a newborn is defenceless and has to be cared for by its parents.

Based on the species, the youngster can take as little as two months to fledge and as much as two years to become self-sufficient. 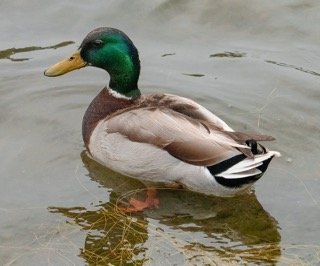