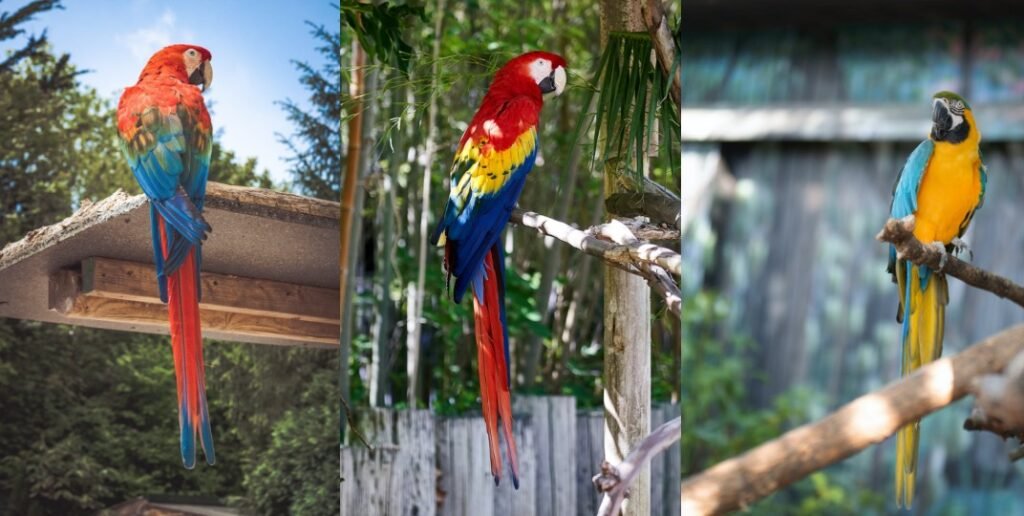 A macaw (Arini) is an omnivorous creature belonging to the Animalia family, phylum Chordata, class Aves, order Psittaciformes, and family Psittacidae. Its genus is Arini. Its height is up to 30 to 39 inches, it weighs up to 2 to 4.4 pounds, and it has a wingspan of up to 3 to 4 feet, with a lifetime of up to 50 to 60 years.

A macaw is a bird that feeds on fruits, seeds, nuts, and insects. The most distinctive characteristics are its large, colourful body and curved beak. Macaws are preyed upon by snakes, monkeys, and larger birds.

Physical features include red, yellow, blue, green, and white skin colorations, and feathers on the skin, with a top speed of 15 mph.

Currently, there are roughly 17 different macaw species in the wild and in captivity. All of these birds belong to the Psittacidae family, which means “real parrots” in English. The Psittacinae and Arinae, or Old World and New World parrots, respectively, are two subfamilies of this parrot family.

The Grey Parrot, Cape Parrot, and Senegal Parrot are examples of Old World parrots that are mostly found in Africa. New World Parrots, on the other hand, are six genera of Macaw birds that dwell and wander throughout Mexico, Honduras, Brazil, and other Central and South American countries.

The scarlet Macaw, blue and gold Macaw, green wing Macaw, red-shouldered, or Hahn’s, Macaw, and harlequin Macaw are among these birds. These, unlike their Old-World siblings, have vivid feathers in a variety of colours, including green, blue, yellow, gold, and red.

While these colours are vivid and appealing to humans, they help Macaw birds blend in with the green foliage of the Amazon rainforest and other woodlands in which they live. 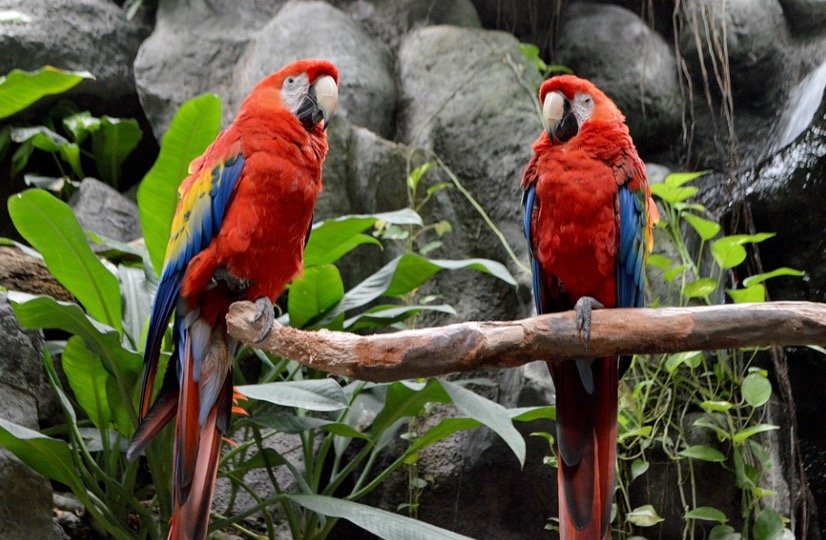 These birds’ blue and gold and hyacinth species are endemic to Central and South America. Mexico, Honduras, and Brazil are among the nations where they may be spotted in the wild. Their brilliant coloration and distinctive feathers help them blend in with the Amazon jungle and other natural surroundings.

These birds usually live in monogamous pairs, although they may also form flocks of up to 30 birds. For security, they usually nest in the cracks of large trees or reside on clifftops.

They’ve also been observed to excavate depressions in riverbanks and other soft-earth slopes. Based on the species you examine, the macaw population fluctuates substantially.

Some species are extinct in the wild, such as the Spix Macaw. In reality, there are just about 200 of these birds left in captivity across the world. In contrast, at least 10,000 blue and gold Macaws are thought to be left in the wild.

While its numbers are still falling, they have been reasonably constant over the previous decade, earning it the designation of least concern. Other species, like the hyacinth Macaw, are vulnerable or endangered.

According to estimates, there are only around 6,500 of these birds surviving in the wild. Similarly, the world’s scarlet macaw population is estimated to be at 2,000 individuals. 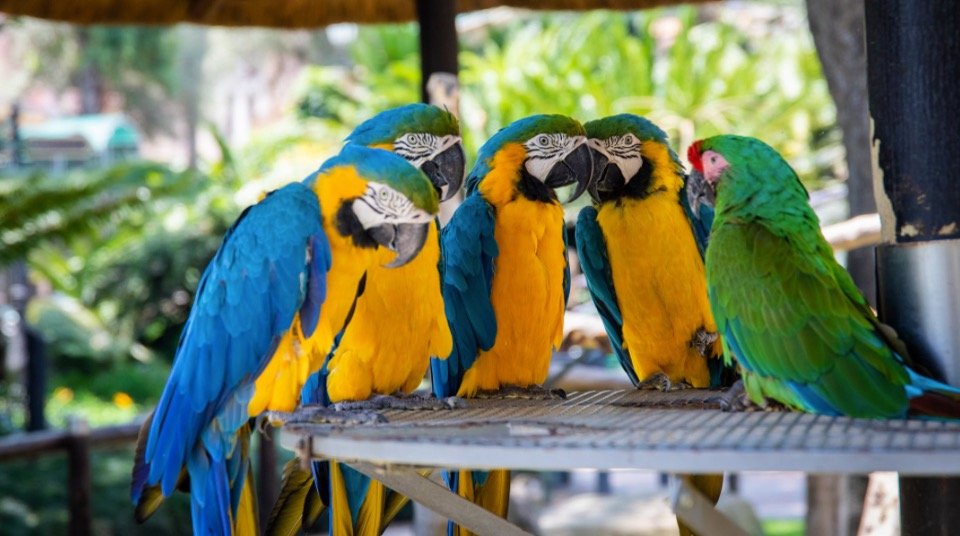 • These birds have a lengthy life span; even in the wild, they may survive for up to 60 years or more.

• They are curious birds who will examine new items with their feet, beaks, and tongues.

• The hyacinth Macaw is the world’s biggest parrot. It may grow to be three feet long and weigh four pounds.

• This bird has approximately 17 distinct species, several of which are threatened with extinction. 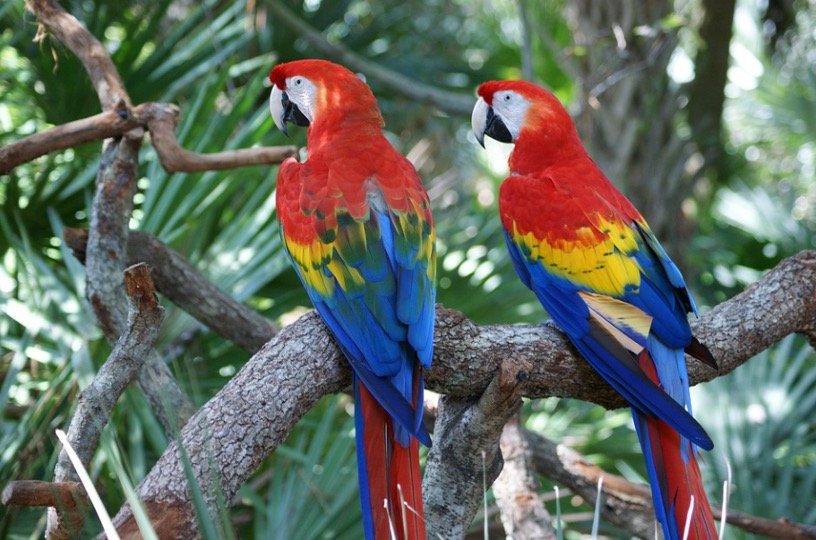 Due to the enormous number of surviving species, there are various scientific names for these birds. The Psittacidae, or real parrot family, includes all 17 of these species. They also belong to the Arinae subfamily of New World parrots, as well as the Arini tribe of Macaws and parakeets.

The following are the six genera of live macaws:

• Scarlet (Ara macao) and green-winged macaws are both members of the Ara genus (Ara chloropterus).

• Only the red-shouldered Macaw (Diopsittaca nobilis) belongs to the Diopsittaca genus. The Noble Macaw and the Hahn’s Macaw are two subspecies of this bird.

• The Spix’s Macaw (Cyanopsitta spixii) is the sole extant member of the Cyanopsitta genus.

Many birds of this species are popular pets due to their joyful temperament, brilliant colours, and ability to learn words. Because of this, certain hybrid species have been created in captivity by breeders.

The harlequin, for example, is a novel breed that is a hybrid of the blue and gold and green wing species. Harlequins have a personality and coloration that is a mix of both breeds. 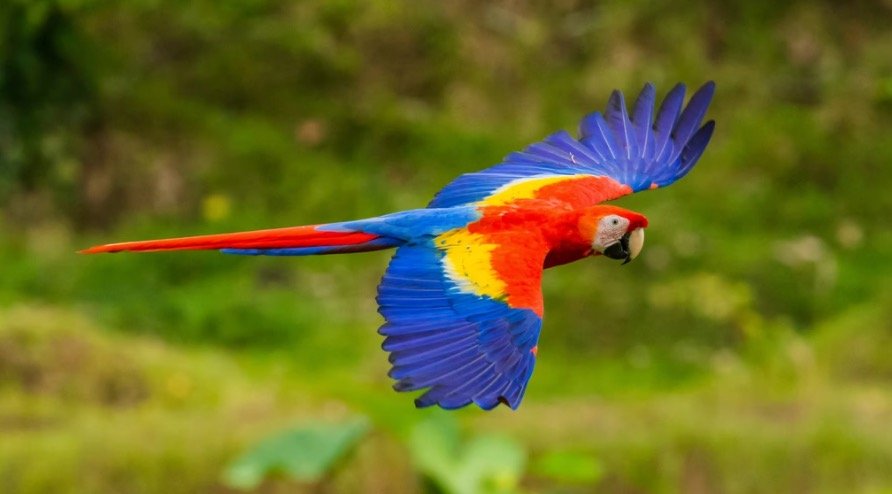 These birds are often cheerful and lively. Clowns or jokers are how their owners describe them. Both in the wild and in captivity, they are very gregarious animals. Many people thrive in households where they may engage with more people on a daily basis.

They will get connected to their owners if they are hand-fed from a young age. These are unusual birds in the wild. These birds have been spotted by scientists and hobbyists experimenting with novel things.

They frequently fling new objects into the air, catching them with their beaks or feet. They will also lick and taste the thing in order to learn more about it.

Although these birds form pairs, they also like to create bigger flocks of 30 to 40 birds or more. Increased numbers help them defend against people, snakes, bigger birds, jaguars, and other predators. 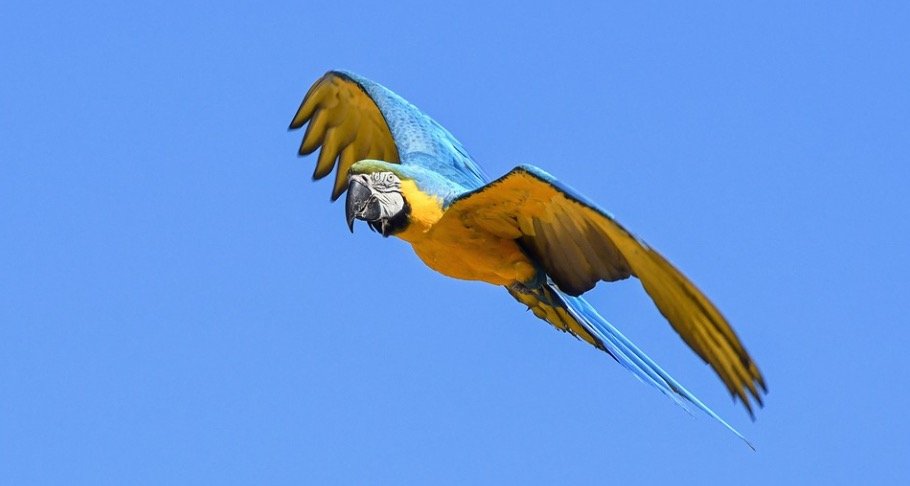 To communicate with or warn their flock mates, macaws frequently yell or make loud noises. They like learning a new language in captivity and will practise it until they master it. As you might expect, average size, weight, and wingspan vary greatly between species.

The Ara genus has the biggest specimens. The hyacinth Macaw, with a wingspan of three to four feet and a weight of up to four pounds, belongs to this group. It’s also longer than 39 inches.

The red-shouldered macaw (Diopsittaca nobilis), sometimes known as the mini-Macaw, is the smallest species. These birds are only 5.8 ounces in weight and 12 inches in length. This species includes Hahn’s Macaws and Noble Macaws, which are very identical in appearance.

The Hahn, on the other hand, has a black upper mandible. These birds typically build their nests in the knots and cracks of large rainforest trees.

In the savannahs and plains of South America, several species make their homes in rotting trees. For safety, some species may dig out a spot on a riverbank, while others will prefer to nest on rocky cliffs. 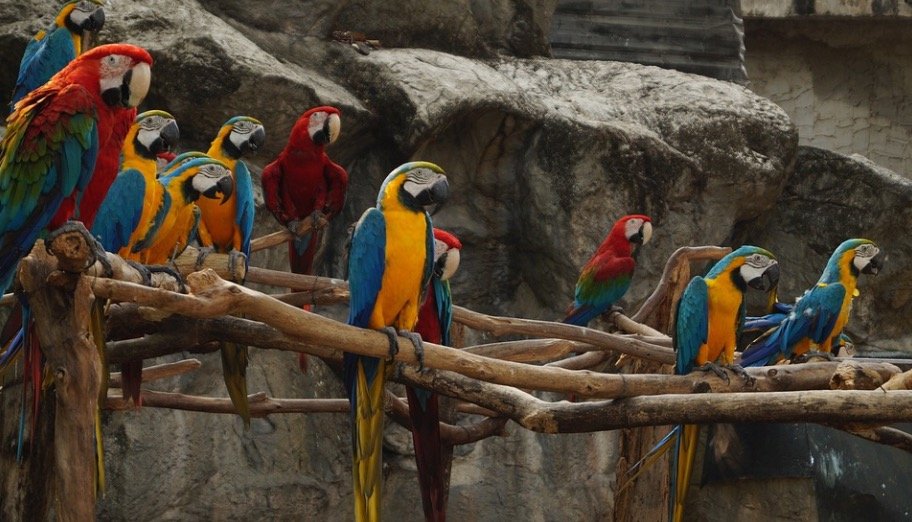 Fruit is the primary source of sustenance for macaws. They do, however, fly to grassy regions in quest of seeds and nuts. Almonds, Brazil nuts, and other similar nuts can be cracked by their powerful beaks. The bigger species, like the hyacinth Macaw, benefit from the increased caloric value and fat content of nuts.

Several natural species in the Amazon rainforest and Central and South American woods pose a threat to these birds. Snakes, monkeys, and larger birds are among the predators. Pythons, boa constrictors, jaguars, ocelots, eagles, and falcons are among the specific dangers. 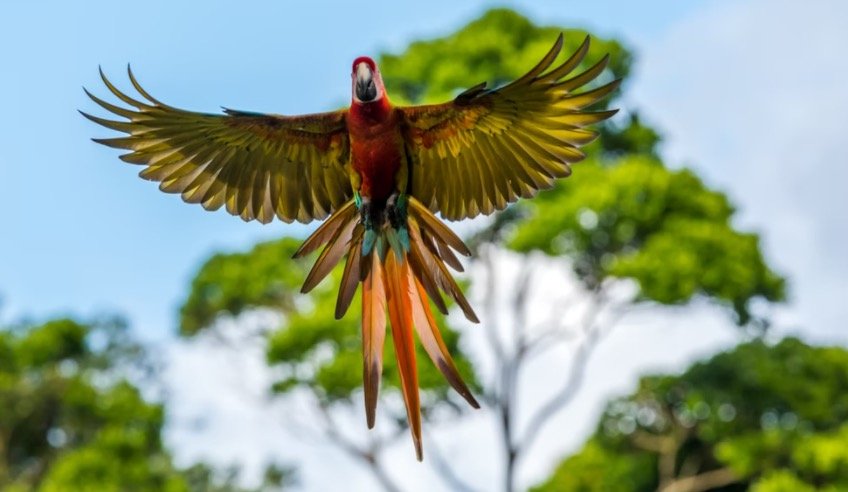 Based on the species, macaws achieve sexual maturity between two and ten years of age. They will usually pair up and connect with another bird in their flock at that time. The majority of clutches contain one to four eggs.

Females will normally wait two years to mate again if reproduction is successful. Based on the kind of macaw, the eggs usually take between 24 and 28 days to hatch. Chicks will normally stay in the nest for up to three months after hatching, protected by their parents.

They usually stay with their parents and siblings for a year before moving out to find their place in a flock. The lifetime of a macaw varies greatly depending on the species. The blue and gold Macaw, for example, may live up to 35 years in the wild.

The green wing and scarlet macaws, on the other hand, have a lifetime of 70 to 75 years. In the wild, these birds live an average of 60 years, although some individuals live into their 80s and beyond.