Ducks, often known as waterfowl, are playful aquatic birds that may be found in both fresh and salt water. They, like geese and swans, are members of the Anatidae family. Ducks are divided into three groups in general:

Ducks are known for their swimming abilities, but can they fly? Yes! Many duck species are good fliers, especially when migrating. Although all ducks have the potential to fly, certain species are unable or unwilling to do so.

The Falkland Steamerduck, for example, is nearly flightless and only flies small distances inside the Falkland Islands. Their size, weight, wing structure, condition, and habitat are all factors that contribute to their incapacity to fly. There’s a lot of intriguing information and statistics regarding our quacky buddy’s flight below. 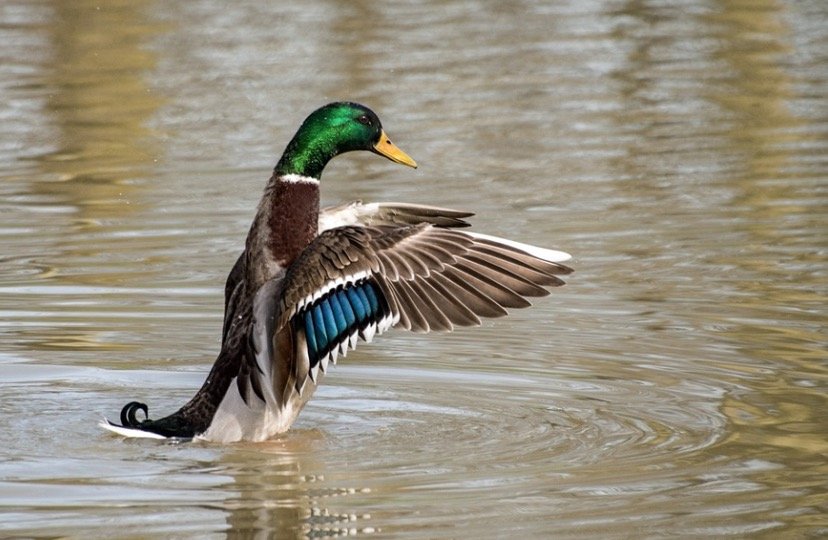 How do Ducks Fly?

Ducks have curled pointed wings in general, with certain species having tiny wings in comparison to their overall size. Ducks have the ability to fly vast distances, especially during migration. Regardless of wing size, they must flap virtually continually to keep their bodies aloft.

The coverts are softer than the flight feathers and form a rigid, flat surface to allow for maximum airflow, while the tail feathers function as a rudder, assisting in flight control and stability.

Ducks lose their flying feathers during the moulting season, and some species are unable to fly for three to four weeks. Indian Runner Duck, Pekin Duck, Rouen Duck, and Cayuga Duck are examples of domestic ducks that are unable to fly.

Why do Ducks Fly?

Ducks like the same environments as any other aquatic bird: rivers, ponds, lakes, open seas, freshwater marshes, and bays. So, why do ducks abandon their habitats and fly? With the exception of Antarctica, ducks can be found on every continent except Antarctica.

Many migratory animals abandon their regular habitats because they cannot tolerate cold weather. They plan to spend the winter in warmer areas with plenty of food and little chance of freezing water.

Some species travel to their breeding grounds in order to reproduce. Mallard ducks, for example, travel to the northern regions of their area to build their nests in married couples. Once the female has placed her eggs, the male bird will usually depart the mating region to join other males in moulting grounds. 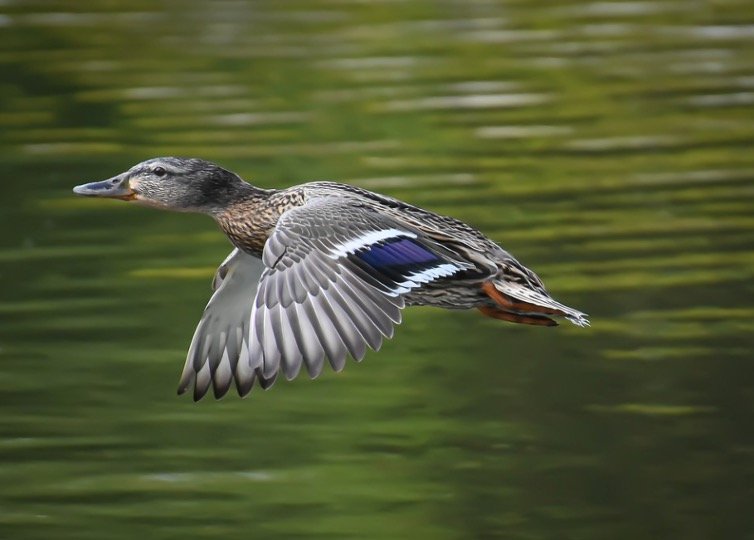 How High Can Ducks Fly?

Ducks will generally fly at significantly higher altitudes during migration to prevent scorching and dehydration. During migration, certain species such as mallards and ruddy shelducks may reach heights of up to 22,000 feet.

Most birds fly below 500 feet in order to conserve energy and avoid predators such as hawks. A skeleton of a pintail was discovered at 16,400 feet on Everest, while paperwork reveals that a jet plane traveling over Nevada struck a Mallard at 21,000 feet. As a result, records like these show that certain species may grow to high heights.

The Mallard duck (Anas platyrhynchos) is a powerful flier that typically flies below 10,000 feet but will fly at altitudes ranging from 200 to 4,000 feet during migration.

Ruddy Shelducks (Tadorna ferruginea) are excellent flyers with a powerful wing beat that allows them to reach altitudes of over 17,000 feet. However, experts have revealed that during migration, they may reach heights of up to 22,000 feet (6,800 metres).

How Fast Can Ducks Fly?

When compared to the world’s fastest land mammal, the Cheetah, which can reach speeds of up to 70 miles per hour, the Red-breasted Merganser holds the record for the fastest duck flying at 100 miles per hour. 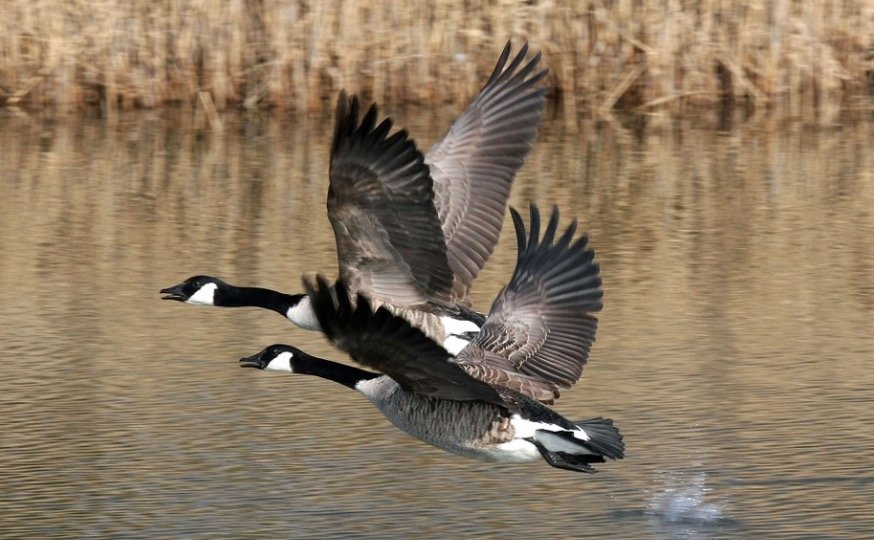 How Far do Ducks Migrate?

Birds migrate to avoid areas where it is too cold for them or where food is scarce. All ducks do not travel the same distances during migration. Some people fly hundreds of miles, while others take a short, leisurely journey of approximately 100 miles.

Can Ducks Take Off Without Water?

Ducks, as we all know, have the ability to fly. Many creatures can take to the air from land or ice, but some are more capable than others. Have you ever seen a diving duck, such as a Tufted duck, Pochard, or Goosander, take flight from the water?

It’s quite a sight to see them sprint over the water, furiously flapping their wings to acquire enough speed for take-off. Dabbling ducks, on the other hand, can lift off from the water fast, effectively, and practically vertically!

Do Ducks Fly at Night?

The majority of waterfowl migration happens at night, with movements picking up just after sunset, peaking in the middle of the night, and then tapering down. Many animals are more active at night than during the day. They prefer to forage for food in the dark, possibly because of changing habitat circumstances and predator avoidance. 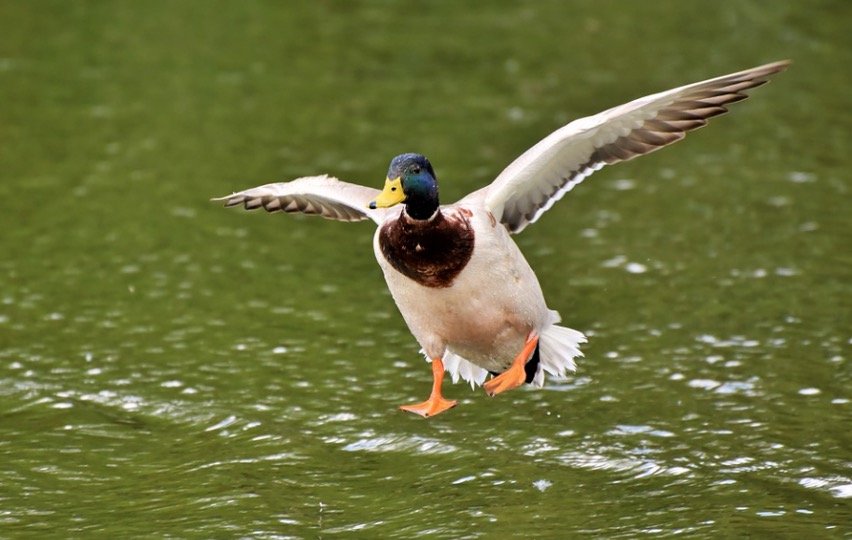 Do Ducks Fly in the Rain?

The British proverb “wonderful weather for ducks” is well-known, but do our feathered companions fly when it rains? Ducks do, in fact, fly in mild rain or gusts.

Ducks, like most other birds, can only fly forward, with the exception of the Hummingbird, which can fly backwards and upside down.

Do Ducks Fly in a Formation?

During migration, it’s typical to observe a flock of ducks flying in a V configuration. When the birds fly in formation, they can conserve energy and exert less effort. The group is led by the leader, with each bird flying somewhat higher than the one in front.

The timing of wingbeats is critical when flying in this configuration. Swirling air flows out of each bird’s wingtips as it flaps, and the upward flowing air helps each bird conserve energy and take advantage of a free ride.

The birds take turns leading the flock, which helps them avoid becoming weary. Ducks can fly in what are known as ‘three bird flights’ during the start of the breeding season. This is usually a well-established couple with a lone drake on the search for a female companion.

Between 50 and 60 days, baby ducks achieve their freedom and fledge. They are still under their mother’s protection and control until that time comes.

Mallard ducks have a wingspan of 75 to 100 cm and can fly at speeds of up to 55 miles per hour. They have powerful, pointed wings that are somewhat bigger than diving ducks’. They have the ability to take off virtually vertically from the sea.

The Indian Runner duck is a domestic breed that is descended from the Mallard duck. They’re known as Penguin ducks because of their upright, bottle-shaped bodies and the fact that their legs are set far back on their bodies, allowing them to sprint rather than waddle. Although Indian Runner ducks cannot fly, they can jump three foot-high fences if they feel threatened.

Pekins are sociable and energetic birds that are big and hefty. They are a domestic duck breed that descended from the Mallard duck and are categorised as flightless. Individual ducks that are lighter may be able to fly for a limited distance.

Due to their physical form, weight, and size, domestic ducks are unable to fly. Domestic duck breeds include the Indian Runner Duck, Khaki Campbell, Pekin, Rouen, and Cayuga, all of which are descended from the Mallard.

Many domestic duck breeds make excellent pets and may be maintained safely in a garden or back yard. If feasible, a small pond or paddling pool would be a nice addition for them, as they like paddling and splashing in the water.

Domestic ducks have long been featured in children’s books and cartoons, making them well-known and well-liked by many of us. Beatrix Potter’s Jemima Puddleduck, an Aylesbury duck with a big upright body, white feathers, a pink beak, and orange legs and feet, was a highly famous white duck.

Other notable ducks that resemble the American Pekin duck include Walt Disney’s Donald Duck, his three nephews, Huey, Dewey, and Louie, his love, Daisy, and his uncle, Scrouge McDuck. Another famous duck, Daffy Duck, was developed by Warner Brothers and resembled the American black duck.