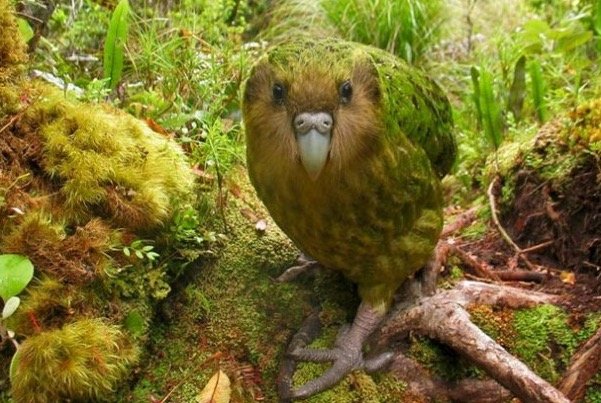 A Kakapo (Strigops habroptilus) is a herbivorous creature belonging to the Animalia family, phylum Chordata, class Aves, order Psittaciformes, and family Nestoridae. Its genus is Strigops. Its length is up to 24 inches, it weighs up to 4.5 to 9 pounds, and it has a wingspan of a few feet, with a lifetime of up to 50 to 65 years.

A Kakapo is a bird that feeds on rimu fruit, flowers, roots, and seeds. Kakapos are preyed upon by carnivorous mammals. Physical features include brown and green skin colorations and feathers on the skin.

The kakapo, which is native to New Zealand’s South Island, is a huge flightless bird that has evolved to occupy a similar ecological niche to terrestrial mammals in the manner in which it forages for food on the forest floor at night.

Though the island had been mostly predator-free for millions of years, the introduction of genuine animals from beyond the island had a disastrous effect on kakapo bird populations, as the birds were unable to deal with the danger of carnivores.

The kakapo bird has become a little conservation celebrity throughout the world in recent years. 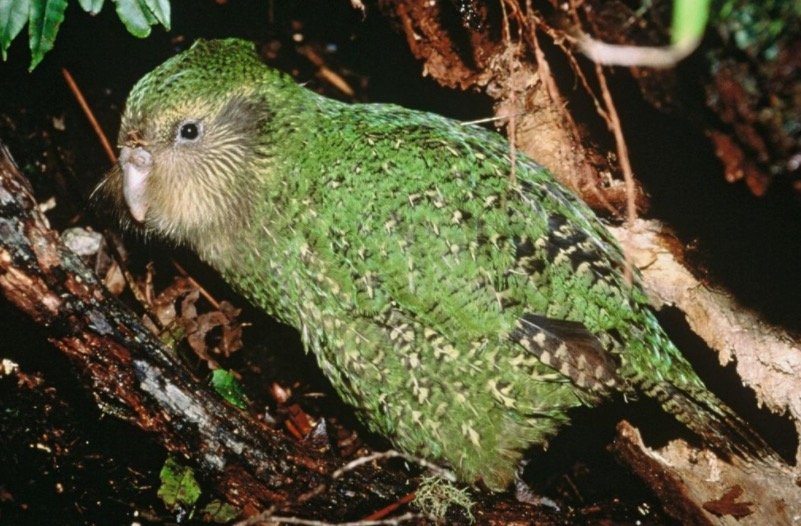 These parrots are forest-dwelling birds that have developed totally in their native New Zealand environment. The kakapo builds its nest in the shade of trees, in rock crevices, or within hollow tree trunks.

The bird, which was formerly common over most of New Zealand, experienced a dramatic fall once European immigrants arrived, eventually dwindling to roughly 50 or 60 individuals by the late twentieth century.

They were only spared from extinction by well-planned conservation efforts. The survivors were transported to three offshore island sanctuaries where they would be safe from predators.

Environmental activists have made some progress in restoring the species, despite the low population. There are roughly 200 kakapos left in the wild today.

Modern kakapos, on the other hand, struggle with illness resistance and infertility due to a lack of genetic variety. Conservationists can create a kakapo family tree using DNA sequencing to help reduce inbreeding. 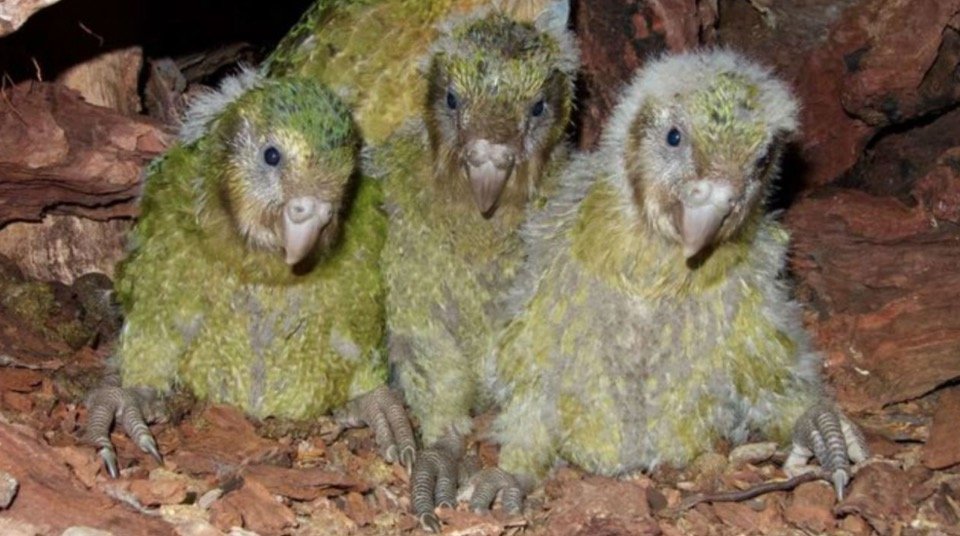 • The kakapo bird wanders about in a horizontal position with its bill almost touching the ground, which is one of the more unusual facts. If the kakapo feels threatened, it may rise to protect itself.

• The kakapo is the world’s only nocturnal and flightless parrot species.

• Kakapo feathers were used to build colourful cloaks and adornments by Polynesian immigrants. Their flesh was also a reliable source of nutrition.

• These parrots have won the New Zealand Bird of the Year award twice in their native nation, in 2008 and 2020. This bird has piqued the interest of people all around the world. On YouTube, a notorious BBC video of the bird starring British actor Stephen Fry has around 20 million views.

• Kakapos are the world’s biggest parrots. They may weigh up to 9 pounds, making them far bigger than other parrot species, which can only reach a maximum size of four pounds.

The kea and kaka, two other New Zealand birds, are the kakapo’s closest surviving cousins. All three species are members of the Psittaciformes, which is a larger order of parrots. 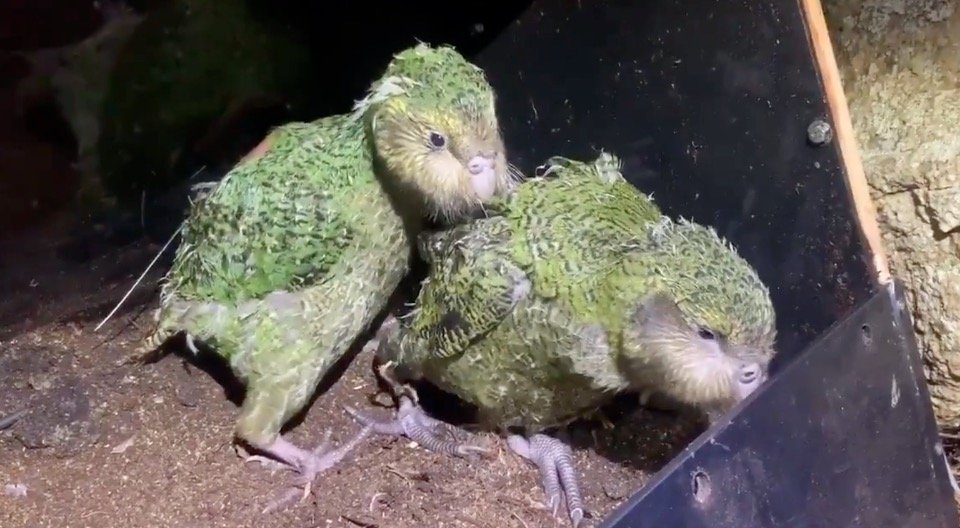 The kakapo has a muscular body with green and brown plumage, a large but short beak encircled by delicate, whisker-like feathers, and a long, spherical tail. The kakapo has forward-facing eyes and disc-like feathers on its face that redirect sound toward the ears, similar to the owl from which it gets its scientific name.

In low-light situations, these modifications allow the kakapo to see its surroundings quite effectively. The anatomy of the kakapo, like that of many other island-specific birds, has developed totally in the absence of many major predators. This means, above all, that it can afford to be large.

The kakapo is one of the world’s biggest parrot species, measuring up to 25 inches in length and weighing up to 13 pounds. The kakapo has evolved reduced wings as a result of its ground-based habitat, which can no longer sustain its massive weight.

Although it is unable to fly, the kakapo has the incredible ability to climb trees using its powerful feet. This bird will use its wings as a parachute to float safely to the earth, which is one of the more remarkable facts. The wings also help to keep you balanced, whether you’re walking or jogging.

Except during breeding season, the kakapo is not a sociable animal. They are fiercely territorial birds that use a loud “kraak” sound to warn trespassers away. However, each bird looks like it’s clever and has its own personality.

The kakapo is an herbivore with a beak and mouth that grinds up food. It lacks the specialised organ known as the gizzard, which ordinarily grinds up food, unlike many other bird species.

It’s also one of the few land birds capable of storing substantial quantities of energy in the form of body fat.

Fruits, seeds, leaf buds, shoots, tubers, rhizomes, pollen, mosses, and fungus are among the foods consumed by the kakapo, which vary according to season and place.

For millions of years, the kakapo has had few natural predators in the wild. However, the initial wave of Polynesian settlers brought rats and other creatures with them, which preyed on helpless chicks left alone in their nest for hours while their mother went in search of food.

With the loss of trees and the introduction of cats, ferrets, and stoats, European immigrants radically altered New Zealand’s environment. The kakapo had nearly gone extinct by the 1950s. The kakapo was only saved because of extraordinary conservation efforts.

However, the IUCN Red List still lists the species as severely endangered. Here you can learn more about the world’s most endangered species. The kakapo’s principal predators were huge birds of prey until large carnivorous animals were brought to New Zealand.

It was generally able to trick other birds by freezing in position and blending in with the woodland environment. By using their scent to hunt the kakapos, carnivorous animals have proven to be more efficient predators.

Because the kakapos did not have enough time to develop powerful defences against terrestrial animals, their population numbers were decimated. 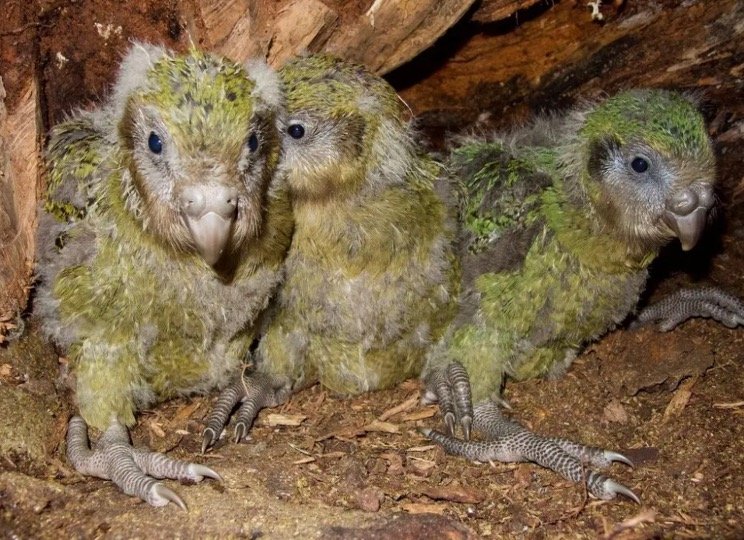 It’s probably not an exaggeration to state that the kakapo’s courting ritual is one of the most sophisticated and interesting in the animal kingdom. Male kakapo will leave their native region and establish a mating location on the hilltops when the reproduction time approaches between December and February or March.

These “leks” are made of hollow bowls that have been meticulously pruned of any plants.Long paths that run more than 100 feet in each direction connect a complete system of leks. These leks provide a handy location for them to woo females.

This courtship is marked by an enthusiastic display in which the male inflates his chest, bobs his head, and emits a tremendous sound that can be heard for half a mile in all directions on the wind. These noises are produced by a special air sac in the male’s thorax.

The male will cement the deal with a quick wooing dance if he has piqued the interest of a possible partner. He will leave the scene after completing his reproductive duties, leaving the female in charge of building the nest, incubating the eggs, and rearing the chicks.

Only a few eggs will be produced by the mother, and they will be spaced months apart. The chicks emerge from the eggs underdeveloped and helpless after around 30 days of incubation; the precise word for this undeveloped condition is “altricial.”

As previously said, the mother leaves the chicks alone for lengthy periods of time in order to find nourishment. At this time in their lives, the ladies are at their most vulnerable.

If they survive this period, the chicks will leave the nest after around 3.5 months, after they have grown their complete feathers. In the wild, kakapos have a lengthy lifetime of 45 to 60 years, although it has been hypothesised that they might live up to 100 years.

The female achieves sexual maturity at nine years of age and reproduces once every two to four years on average, which might explain their poor population expansion.