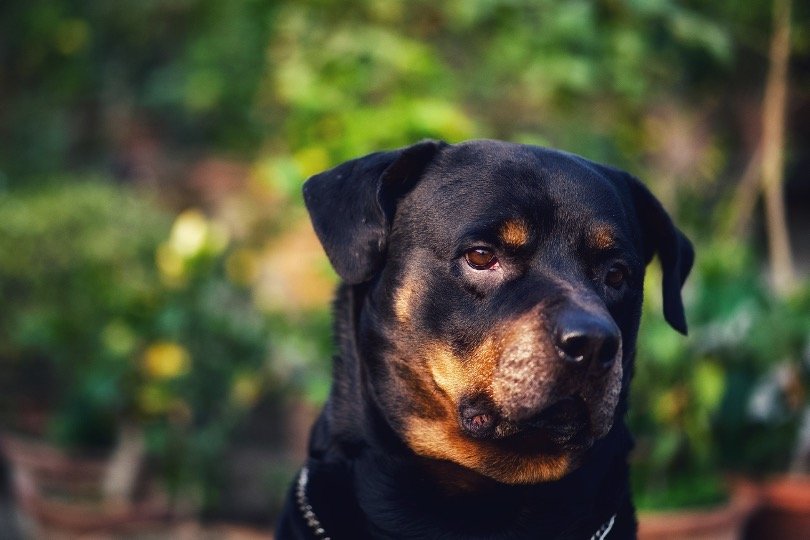 Do Rottweilers Get Their Ears Cropped?

The Rottweiler has an outstanding and easily recognisable appearance. It is courageous, vigilant, and massive. He is a purebred dog with well-defined tan markings mostly on cheeks, eyes, muzzle, neck, and legs. He is highly sought after by fans of large and powerful canine breeds.

And, since we’re on the subject of breed standards, do Rottweilers get their ears clipped like other purebred dogs? The basic answer is no, as clipped ears haven’t been part of the Rottweiler breed standard.

Cropped ears are becoming a distinguishing feature of several purebred dogs, such as Doberman Pinschers and Great Danes. However, this contentious technique now raises concerns among dog owners, veterinarians, and other canine professionals.

Cropped ears have never really been part of the Rottweiler breed standard. Furthermore, their floppy ears might be more useful in aiding Rottweilers in detecting and tracking livestock.

Communication with livestock and humans has always been critical for Rottweilers to accomplish their work properly; this is presumably why it was crucial to retain the ears in their natural shape so that their hearing was not hampered.

What Do Swans Eat? Everything You Need To Know

Unlike many other bully-type dogs, Rottweilers were not traditionally utilised for dogfighting or combat against huge animals. Pit Bulls and American Bulldogs had their ears trimmed to keep them from being ripped apart in a fight by other dogs.

The ears and tail were deemed a weak point that should be eliminated in order to avoid harming them in the ring. There’d have been no reason to chop off their ears if Rottweilers were not used to battling in this manner.

Why Do Some Dogs Have Cropped Ears?

Whenever it comes to clipping dogs’ ears, it should be mentioned that this practise is limited to specific places and breeds of dogs. Indeed, it was common practise to remove the ears of dogs used for battle, security dogs, or so-called utility dogs.

This technique is attributed to the fact that the dog’s ears are one of its weak parts. Fighting animals were frequently bitten or damaged in the ears; sensitive and painful, they bled profusely and required a long time to recover.

Can Rabbit Eat Cucumbers? Everything You Need To Know

Dogs’ ears were trimmed to lessen the chance of damage and make them less vulnerable to assault. As a result, the owners of these canines justified the procedure by stating that they wished to ensure the safety of their animals.

Ear cropping is now prohibited in many nations, although not in the United States, despite the fact that some states have legislation governing the practise. Even in nations where ear clipping is prohibited, some owners continue to practise it, despite widespread condemnation.

What Dog Breeds Have Cropped Ears?

A dog with clipped ears is easily identified; these are permanently upright on the dog’s head and cannot fall back. However, because this method is meant primarily for utility and security dogs, only particular breeds were affected.

How Are A Dog’s Ears Cut?

Cropping the ears entails removing the dog’s outer ear, known as the pinna. This is the ear’s floppy section.

A veterinarian performs this surgery under anaesthesia on puppies aged 1.5–3 months. The ears are then strapped to a firm surface while they recover, with the intention of keeping them straight following the healing time.

Is Trimming A Dog’s Ears Cruel?

Many doctors, canine specialists, breeders, and dog owners believe that this treatment is inhumane because it provides no advantages to the dog other than a cosmetic one. This technique is not permitted in several nations, including Australia, Europe, and some regions of Canada.

Furthermore, while the United States has yet to follow suit, Banfield Pet Hospital, the biggest network of animal clinics in the United States, no longer does docking or cropping. Furthermore, the American Veterinary Medical Association (AVMA) advocates for the removal of ear clipping from breed standards.

How Do Birds Mate? Everything You Need To Know

Those who argue that the American Kennel Club (AKC) still supports cropping the ears of specific breeds for competitions should be aware that the Association itself states that dogs without docks nor crops are often just as likely to win at dog shows:

“While it is undeniable that some breeds are being shown with clipped ears, nothing in AKC regulations, and indeed nothing else in the breed standard, requires an owner to have this treatment performed as a requirement for participation into a dog show.”

Even though it is customary in a certain breed for the dogs to have one of these changes, it has the same chance of winning as any other dog of the breed and would only be assessed based on the dog’s conformity to the breed standard.

If you want to buy or adopt a Rottweiler, you may be confident that its ears would not have to be trimmed because this is not a breed requirement. Clearly, this does not diminish the attractiveness of these colossi or any of the breed’s natural features.

In any case, cutting ears is becoming less frequent in American dog culture, which bodes well for more Dobermans as well as Great Danes having natural ears in the foreseeable future.