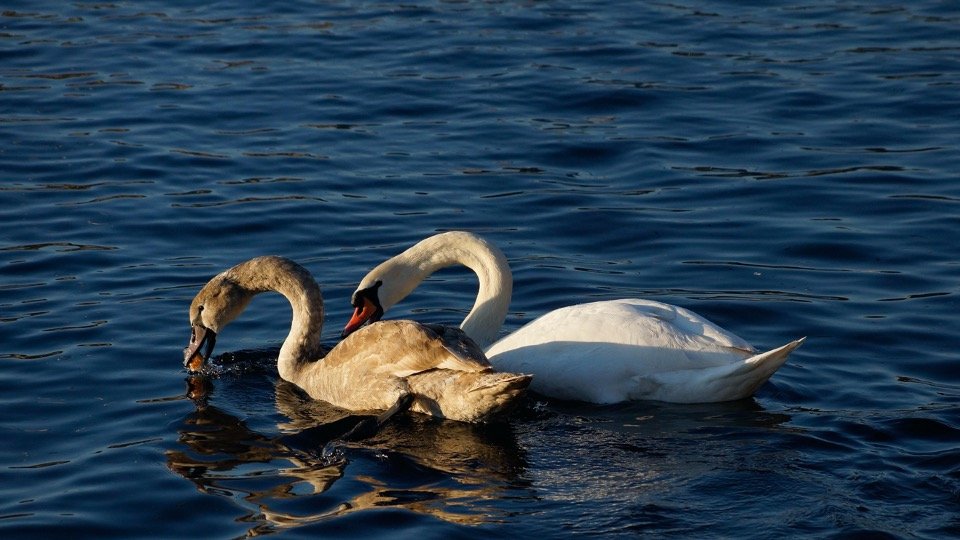 What Do Swans Eat?

Swans are graceful and attractive birds that can be seen all over the world. The sight of a swan family gliding effortlessly along a river, with the male (or cob) and female (a pen) leading a brood of fluffy cygnets, never ceases to awe us.

Swans have wingspans of up to 3 metres, making them some of the largest flying birds. They can easily weigh 15kg and require up to 25% of their body weight in food every day. So, what exactly do they eat?

Swans are mostly vegetarians, thus they derive their nutrition from plants that grow in the water. However, they will occasionally consume insects.

In addition, Swans also eat algae, small fish, frogs, worms, fruits, grass, and sometimes insects. However, Swans are mostly herbivorous birds, so only a small portion of their diet includes insects, mollusks, and other sea creatures. Swans spend time on land and in water, and they find food in both environments.

Most common food of Swan

Is it appropriate for us to assist them by feeding them? In this essay, we’ll go over the fundamentals of swan nutrition and tell you all you need to know about feeding swans.

What Is The best Thing To Feed Swans?

Swans are perfectly capable of surviving without any assistance from us. Stick to foods they’d normally seek out, such as grains, corn, carrots (shredded or finely chopped), spinach and other leafy greens in bite-sized bits, and lettuce.

Feeding swans any processed human foods can cause nutritional imbalances or potentially hazardous digestive obstructions, which can be fatal.

What Should You Not Feed Swans?

Also, only feed the swans small amounts of the authorized foods (see above) and cease feeding as soon as they lose interest.

What Do Baby Swans Eat?

Baby swans, or cygnets, emerge from their eggs coated in fluffy down and with their eyes open after six weeks. They’re called ‘precocial’ since they’re substantially mature from the moment they hatch.

Within a few days, they’ll be ready for their first swim. They absorb the remains of the egg yolk before hatching, allowing them to survive for the first 7-10 days without eating. The yolk is nutrient-dense and easily digestible before the cygnets are ready to deal with plants and insects. 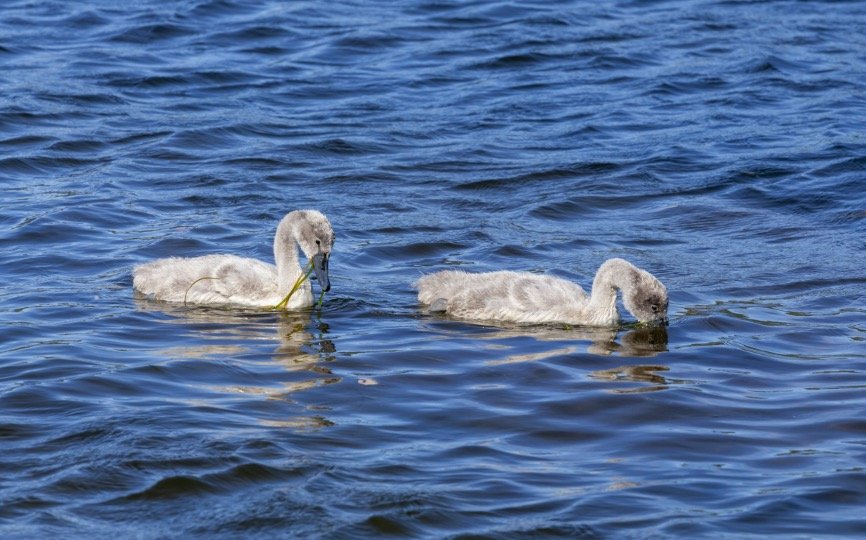 However, they will begin to learn how to forage for insects and vegetables during this stage. By the time their food supply runs out, they’ll be able to feed themselves adequately, albeit with the assistance of their parents.

They can’t go below the surface for the first seven days (this is known as ‘up-ending’), so any food they eat will be on or near the surface. Both parents can help by ‘food-trampling’ or plucking up plants from the bottom.

In shallow water, this entails paddling madly for a few seconds to stir up trash and food that may be lying below, making it easier to grab. After about two weeks, the cygnets are able to dive deeper and pluck up weeds on their own.

Vegetarians comprise the majority of swans’ diets. Fish, frogs, insects, worms, and mollusks are occasionally eaten, but this is typically by accident. The victims are most likely simply in the proximity of a nice piece of foliage that the swan has decided to take and are unable to flee quickly enough.

Cygnets, unlike adults, are more inclined to consume animal materials. As they grow older, the amount of vegetable matter in their food decreases, and by adulthood, their diet is almost exclusively constituted of vegetable matter. Feeding fish to swans isn’t essential or desirable for these reasons. Please don’t go through with it.

What Do Swans Eat In The Winter?

Because the things that swans traditionally forage are in poor supply in cold weather, they will seek out alternatives such as berries and tubers.

If you wish to assist them, choose leafy greens like lettuce and spinach and shred them into small pieces. Swan food pellets with grains, oils, and minerals that float on water can also be purchased. 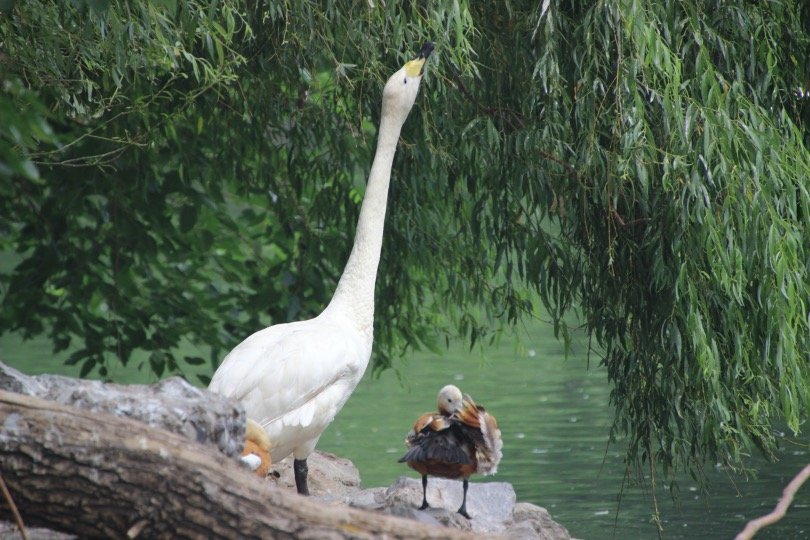 How Do Swans Eat?

Swans have no teeth. They employ a mechanism called a gizzard to grind their food into a mush, which improves digestion by increasing the surface area of whatever food they swallow.

Even yet, the swan can only obtain a small portion of the nutrition it requires. As a result, swans require approximately 25% of their body weight in food on a daily basis. Every day, a 15kg swan needs to find 3-4kg of vegetation.

Many of us have wonderful recollections of feeding bread to swans in parks and rivers in our communities. However, there is a lot of disagreement on whether it is detrimental or not. Professor Christopher Perrins of Oxford University’s Edward Grey Institute of Field Ornithology argues that swans have been eating bread for hundreds of years and that there is no indication that it hurts them in any way– as long as it isn’t mouldy. 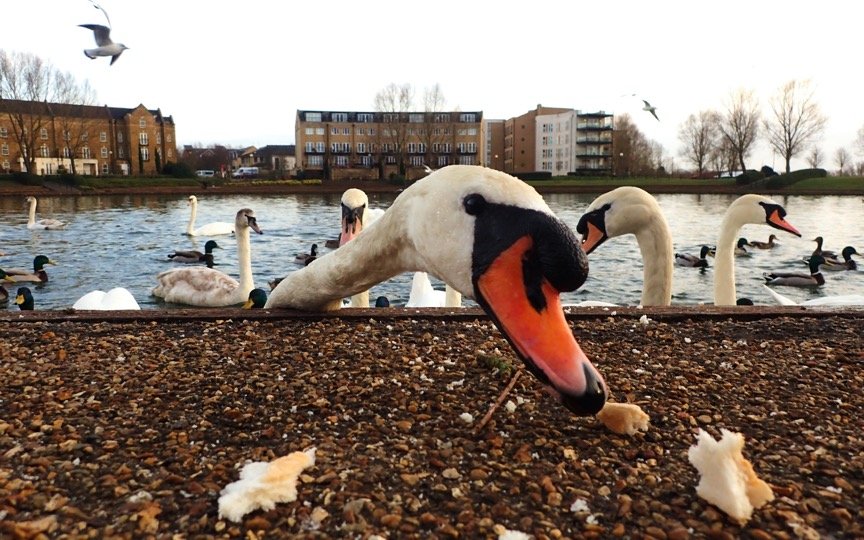 In the winter, when vegetation is scarce, it may be a necessary complement. The other side of the issue is that bread has little nutritional value for swans, and if they eat too much of it, they may not be obtaining the nutrients they need to survive and grow.

Our general recommendation is to avoid feeding swans bread and instead offer them maize, grains, and lettuce. Swans benefit greatly from this type of food because it is considerably more nutritious.

So, if you want to share some fresh bread with swans, start with little amounts and stop when they lose interest (or keep throwing and let the ducks take over!).

Can Swans Eat Fruit And Vegetables?

Greens like lettuce, spinach, shredded carrots, celery, and other vegetables might help supplement their diet throughout the winter when their usual food sources are scarce.

Because swans can’t shred or chew their food, remember to cut it up into little parts. Fruit isn’t a natural food for swans, and the skin of apples could be poisonous to them, so stick to vegetables!

Nuts are not a natural part of a swan’s diet, so don’t feed them to them. Instead of throwing green peas or corn into the water, consider throwing them on the ground.

There have been accounts of swans attacking mallards and ducklings, but this is more likely due to territorial disputes than a desire for food.