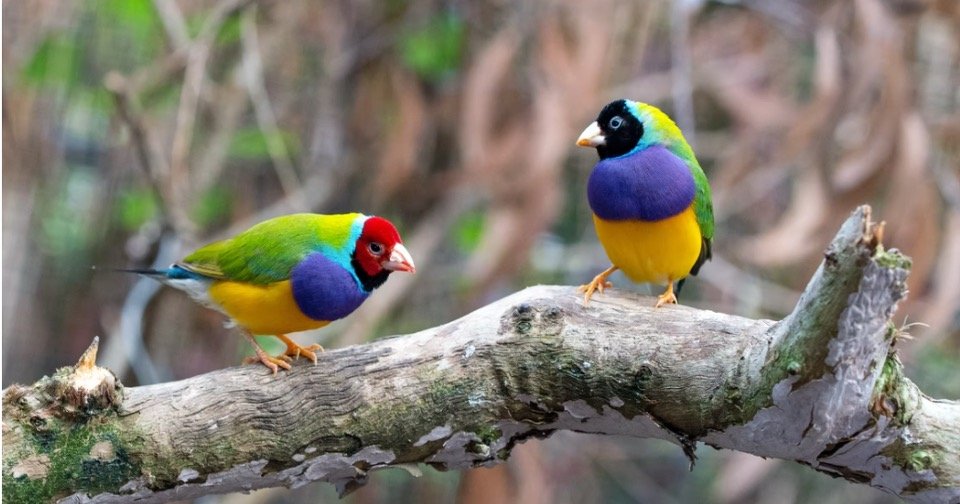 A Gouldian finch (Erythrura gouldiae) is an herbivorous creature belonging to the Animalia family, phylum Chordata, class Aves, order Passeriformes, and family Estrildidae. Its genus is Erythrura. Its length is up to 5.5 to 6 inches and its height is up to 5 inches. It weighs up to 14 g and has a wingspan of up to 5.5 inches, with a lifetime of up to 8 years in captivity.

A Gouldian finch is a bird that feeds on grass seeds, etc. Brightly coloured plumage is the most distinguishing characteristic. Gouldian finches are preyed upon by cats, hawks, and snakes.

Physical features include yellow, red, blue, black, and purple skin colorations, and feathers on the skin.

The Gouldian finch has one of the most remarkable plumages in the animal kingdom, almost as if it were patched together. The head, breasts, abdomen, and back all have a beautiful rainbow of colours on them.

It’s no wonder that this species is in high demand in the pet industry. The Gouldian finch, on the other hand, is facing an unclear future after decades of decline. 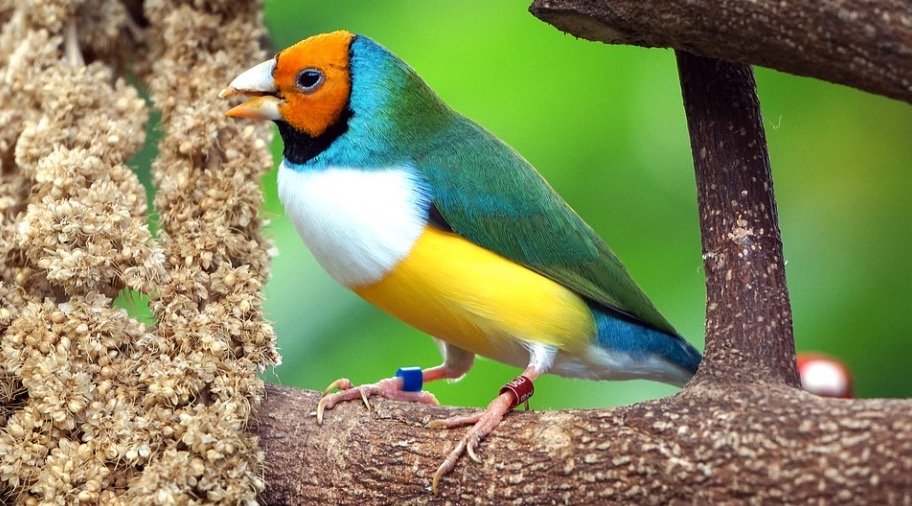 The Gouldian finch was originally common across most of northern Australia. It now only occurs in a few locations in the Northern Territory, in Western Australia’s Kimberley area, and occasionally as far east as Queensland.

It loves broad meadows and plains with a nearby supply of water and a sufficient number of smooth-barked Eucalyptus trees to dwell in. The species requires a certain blend of grass types to feed on. Numerous Gouldian finch pairs may share hollow tree hollow grass nests.

Hundreds of millions of these finches previously inhabited Australia. Only 2,500 adult animals are left in the wild today, although the population appears to be steady. Conservationists have concentrated their efforts on fire control and habitat upkeep since these finches rely on healthy and old trees. 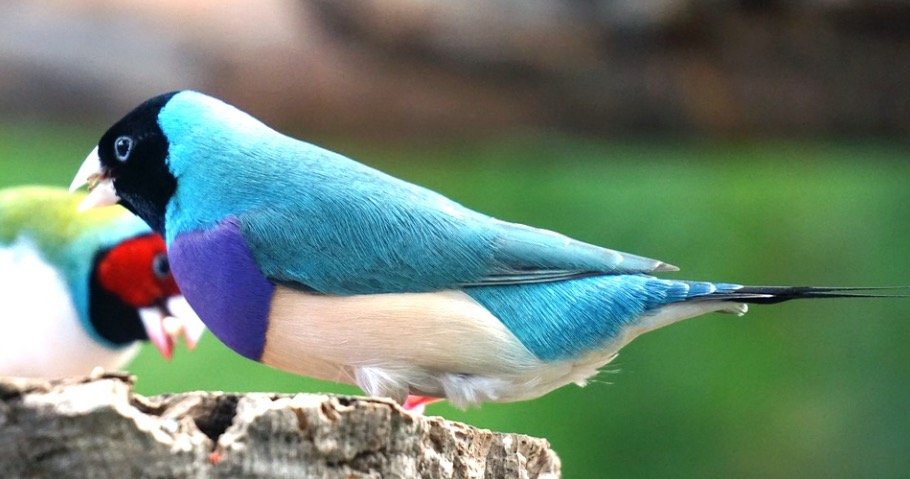 • The standard Gouldian finch is a bird with three distinct facial features. Approximately 70% to 80% of the population has dark skin. Another 20% to 30% of people have reddish-brown skin. The yellow-colored Gouldian finches are the most uncommon of all the finches. This variant is seen in around one out of every 3,000 individuals of the species.

• During the mating season, the male’s brighter plumage and song-making skills have developed to attract mates. The boldness of the colours and song might be used to communicate to the female the vigour and health of the bird. 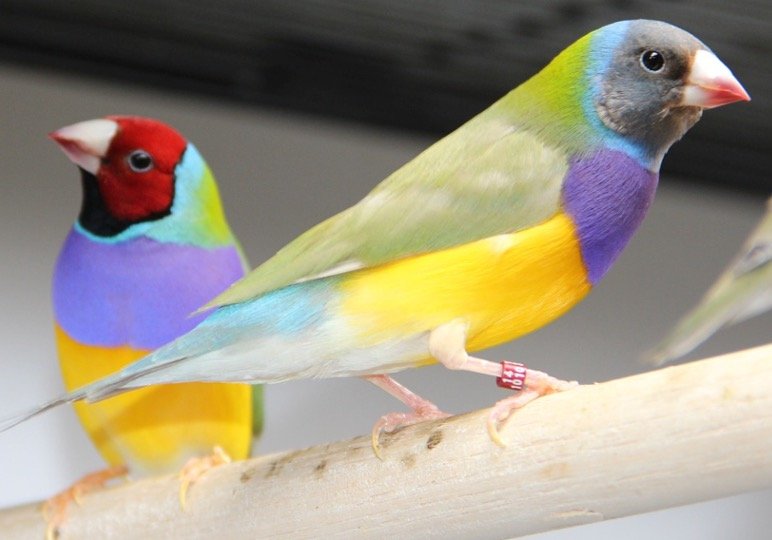 The Gouldian bird’s etymology is Erythrura gouldiae. The variant name Lady Gouldian finch comes from the Latinized name of British naturalist John Gould, who initially classified and named this sparrow after his wife.

The Lady Gouldian finch is classified as either a member of the Erythrura genus, which includes other parrotfinches, or as a new genus, Chloebia. It is also a member of the Estrildidae family of tropical Asian and Australian finches.

The Gouldian finch has a rainbow of colours on its body. The majority of birds have a red, yellow, or black “cowl” on their heads, a turquoise or light green shoulder band, a purple back and wings, and a yellow belly that fades to white.

This is on top of numerous unusual mutations, such as a silver colour. The most noticeable difference between the sexes is that males have brighter purple feathers, and females have a lighter purple breast.

The male is also the only one who sings directly, but both sexes may interact with each other through chirps, hisses, clicking, and trills. The length and wingspan of this bird are around 5.5 inches.

Outside of the mating season, the Gouldian finch congregates in enormous flocks of hundreds of individuals. Long-tailed and masked finches, both members of the same taxonomic family, are also seen in these mixed flocks.

The thick foliage of the Eucalyptus tree gives protection from the sun’s beating rays throughout the day, when the bird is most active.

Although the Gouldian finch is not strictly migratory, these nomadic birds do migrate from one region to another in search of better food and water supplies when one becomes scarce and dry. 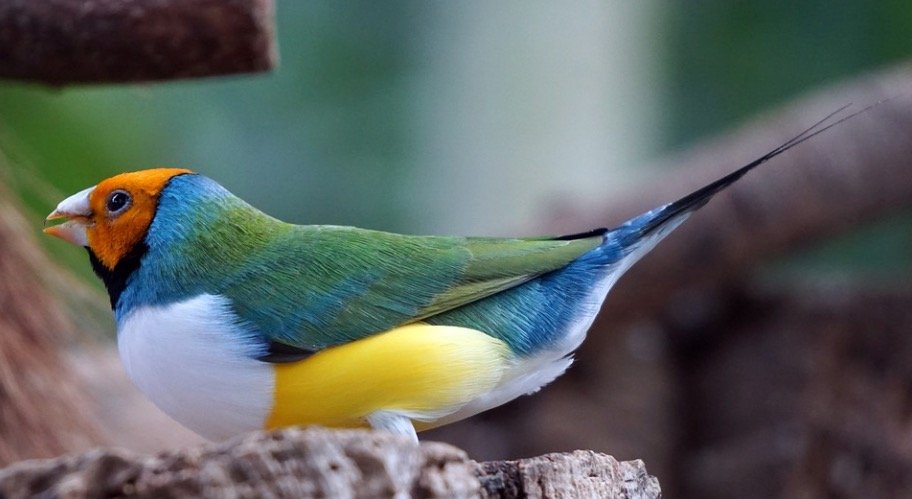 The bird’s thick and powerful beak, like those of many other finch species, is well-adapted for cracking open and consuming seeds. They consume up to 35% of their body weight every day.

Throughout the year, the Gouldian finch feeds on a variety of grass seeds, depending on what is available. It appears to prefer ripe or half-ripe sorghum seeds, which are available during the rainy season, but it also forages on the ground for any grass seeds it can locate during the dry season. 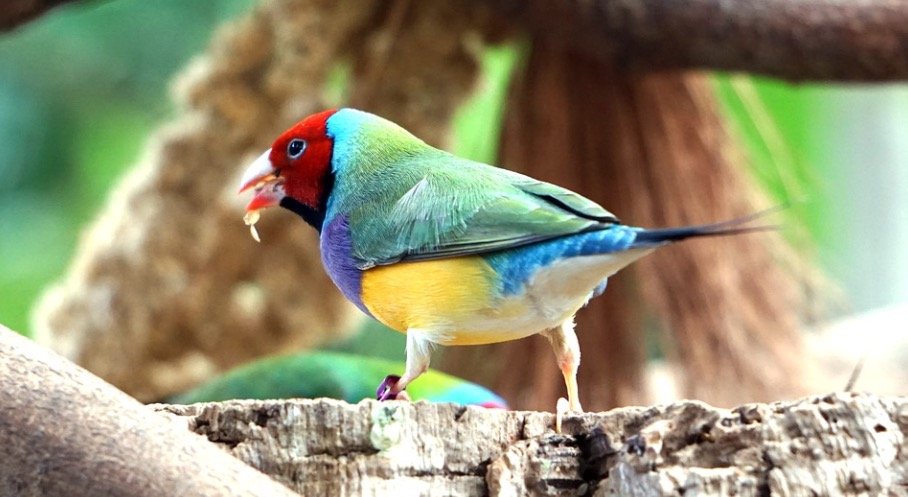 The Gouldian finch has experienced several dangers over the last few millennia, including habitat degradation, predators, herbivorous rivals, illnesses, and parasites such as mites. This species has paid a high price for its vibrant colours, which make them a visible target for both trappers and predators.

Humans captured a large number of them for personal use. Trapping and exporting were outlawed in Australia in the 1980s, although the species was being produced in captivity.

They are now classified as near threatened by the IUCN Red List. They are classified as endangered by the Australian government. Feral cats, hawks, and snakes are common predators of the Gouldian finch.

Predators are more likely to prey on the bird during its first few weeks of life, before it has completely developed. 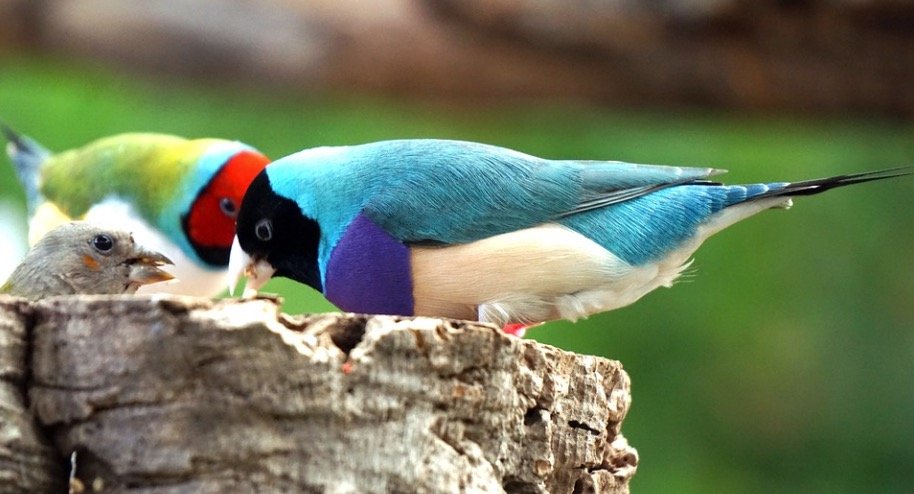 As the mating season begins, generally between December and April, the male finch expands his chest, fluffing up his feathers, and bobbing his head up and down in a dazzling wooing display. By washing her beak, the female responds to his approach.

The female produces one egg every day after they’ve paired up until she’s produced between four and eight eggs. Both parents are essential in the incubation of the eggs and in the upbringing of the young.

The chicks hatch from the eggs with no feathers and blue nodules at the corners of their beaks to assist the parents identify their mouths in the dark after around two weeks of incubation. These chicks will get their full flying feathers after three to four weeks of life, despite being fully reliant on their parents for food and safety.

Both males and females have duller green-gray plumage at this stage. Their sex is only visible when they have grown their full adult feathers, which occurs between the ages of eight months and a year, exactly around the time they achieve sexual maturity and begin reproducing.

In captivity, these birds may live up to eight years, although many wild birds do not reach puberty and have a shorter lifetime.