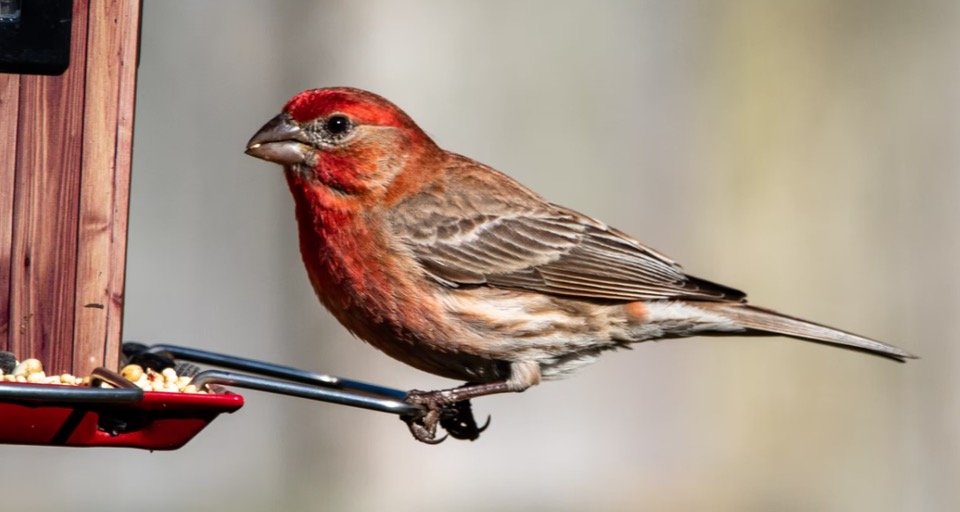 A house finch (Haemorhous mexicanus) is a herbivorous creature belonging to the Animalia family, phylum Chordata, class Aves, order Passeriformes, and family Fringillidae. Its genus is Haemorhous. Its length is up to 5.5 inches and its height is 6 inches. It weighs up to 19 to 22 g and has a wingspan of up to 8 to 10 inches, with a lifetime of up to 11 years.

A house finch is a bird that feeds on grains, seeds, buds, and flowers. The bright red colour is the most distinguishing characteristic. House finches are preyed upon by raccoons, skunks, snakes, squirrels, rats, chipmunks, and other birds.

The house finch is one of North America’s most widespread bird species. The house finch is a member of the true finch family, with a colourful plumage and a robust beak well-adapted for seed-eating (scientific name: Fringillidae). Even if you don’t see them, you may often hear their bright and cheery calls throughout the spring and summer. 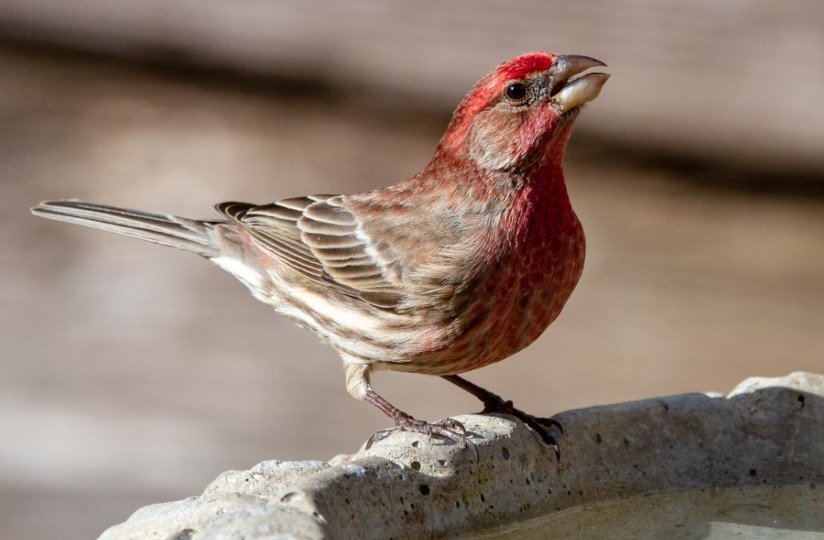 The house finch is a large-territory bird that may be found in most of the United States, Mexico, and southern Canada. This species was once totally native to the western United States, but after being introduced to the east in the 1940s, it swiftly expanded throughout the country.

In the late 1800s, it was also introduced to Hawaii. Within this range, the house finch may thrive in practically any habitat, including plains, woodlands, and deserts. It also gets along with people rather well.

The little cup-shaped nest is built by the female finch from grass, twigs, leaves, roots, feathers, and even small detritus. Despite the fact that many species have been extinct, these finches have extended their range and population numbers throughout the twentieth century.

According to the conservation organisation Partners in Flight, there might be up to 40 million house finches in the wild. According to some estimates, the number is closer to 20 million. 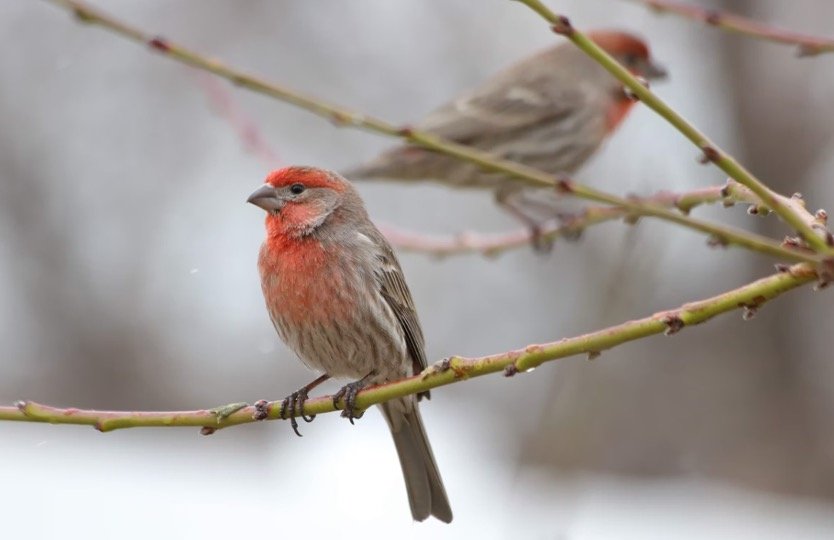 • The house finch, while being nearly entirely herbivorous, is a bird that may ingest insects by mistake when exploring for other foods.

• The colour of the house finch varies depending on the type of foliage it eats.

• One of the most popular visitors to bird feeders is the house finch. If one bird finds the feeder, the rest of the flock may follow suit. 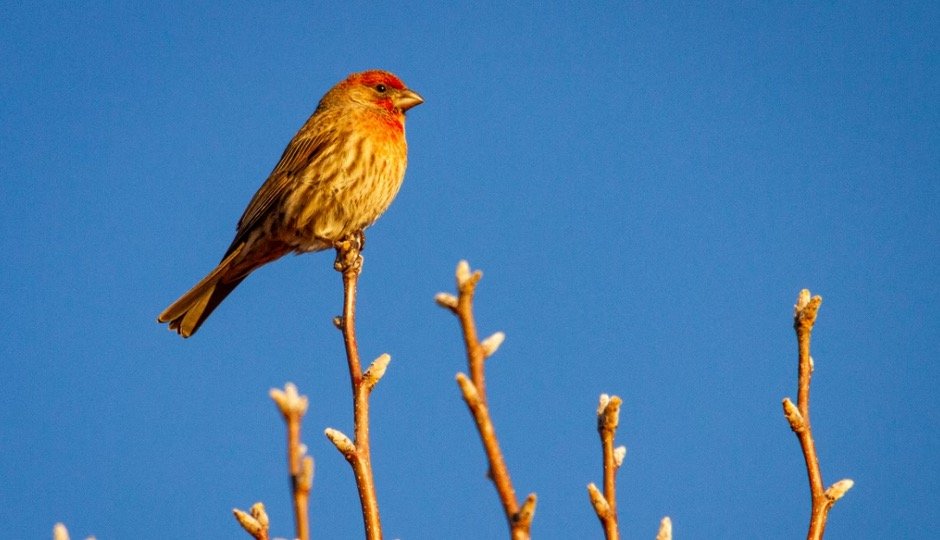 The name of this genus is a mixture of two Greek words: haemo, which means blood, and orrhos, which means rump. This may be a reference to the finch’s brilliant red lower back feathers. The purple finch and Cassin’s finch are two more species in this genus that share the same range as the house finch.

This finch is a small bird with a 10-inch wingspan that is no more than 6 inches in length. It has a small but powerful beak, a square-tipped tail, and a brown body with darker streaks running down its sides.

Red feathers decorate the head and shoulders of an adult male, reaching down sections of the stomach and back. The colour intensity is determined by the amount of fruit consumed, which fluctuates with the seasons.

The house finch is a sociable bird that gathers in big flocks to defend itself. Females are dominant over males in these flocks, displaying different hierarchical behaviour. During the mating season, the finch sings a loud, warbling song after sunrise and soon before dusk.

During the courting and nesting periods, this singing is at its most vigorous. Their communication is also influenced by their body posture and plumage.

This finch is a sedentary bird that does not wander far from its territory throughout most of its range. However, certain populations from the north and east do travel south during the winter. 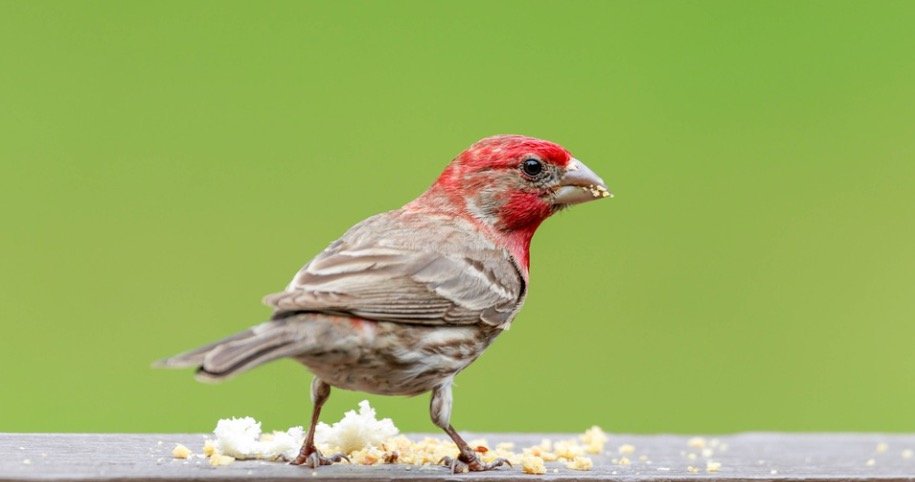 Unlike many other finches, this species forages both in the trees and on the ground. When foraging on the ground, this species prefers to feed in big flocks for safety or to maintain a high perch nearby in case predators are spotted.

Once a day, the house finch drinks by scooping water into its beak and tilting its head back. This sparrow consumes grains, seeds, buds, and flowers, among other things. Sunflowers, mistletoe, dandelions, and thistles are among its favourite seeds. 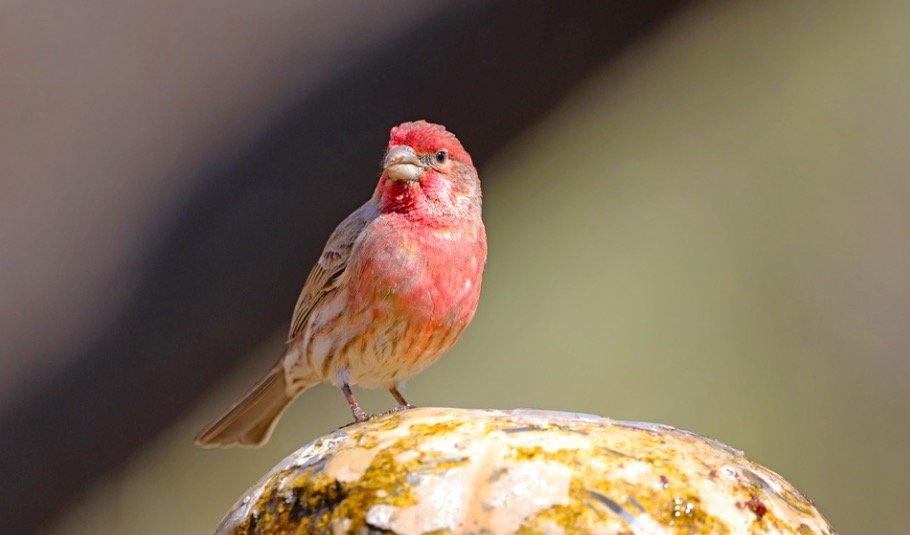 Predators hunt this sparrow in vast numbers, yet it has adapted well to human activities. This species is now classified as of least concern on the IUCN Red List. Domestic cats and Cooper’s hawks are the main predators of these finches.

Raccoons, skunks, snakes, squirrels, rats, chipmunks, crows, and blue jays are just a few of the animals that may attack the nests for eggs. 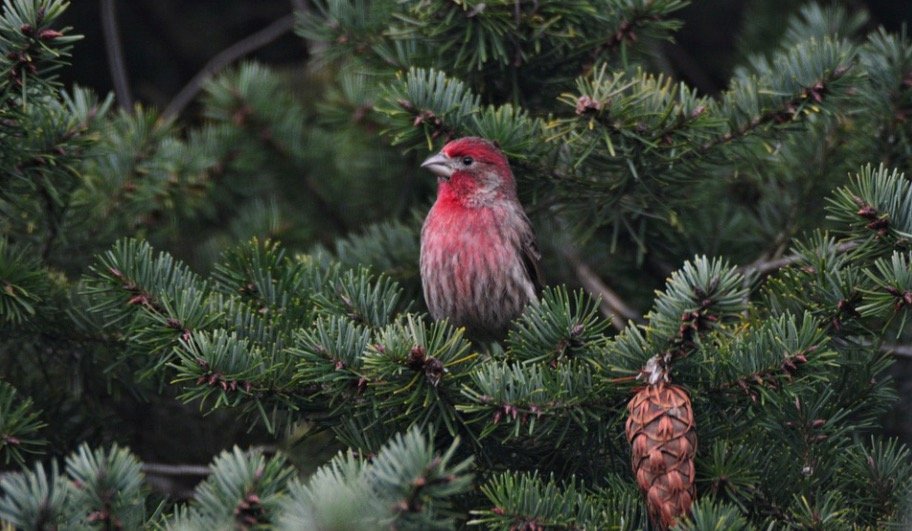 Several courting rituals are used by the house finch to form monogamous pair bonds throughout the winter. The duo may touch banknotes and feed each other to indicate their interest. The butterfly flight, however, is by far the most exquisite courtship show.

The male soars to a height of 100 feet before gliding back to his perch while singing the entire way. Females appear to prefer vividly coloured males because the brilliant red indicates the male’s fruit intake and, hence, his foraging skill, strength, or attractiveness.

Every year, between March and August, the breeding season takes place. The female lays three to six blue or green-white eggs at a time after building her nest, then incubates them for about two weeks until the offspring hatch.

The chicks are fed by both parents, who alternate feeding them regurgitated seeds. The fledglings leave the nest after growing their flight feathers, which takes 12 to 19 days.

After that, the female will begin preparing a new nest for the next batch of eggs. She has the ability to create up to six broods every season, but only three will result in real kids.

The typical lifetime is unknown, although the oldest recorded house finch survived in the wild for 11 years and seven months. Predators and nest raiders frequently shorten the longevity of birds.