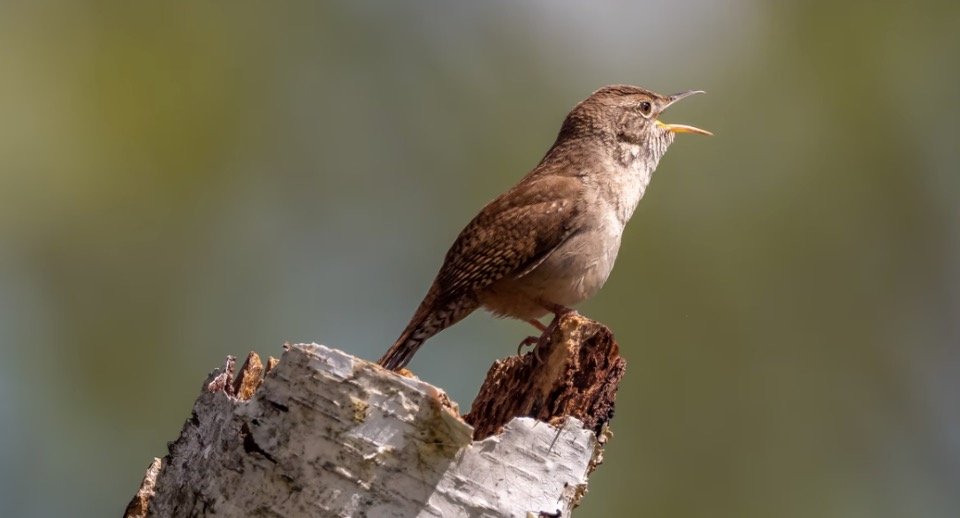 A house wren (Troglodytes aedon) is a carnivorous creature belonging to the Animalia family, phylum Chordata, class Aves, order Passeriformes, and family Troglodytidae. Its genus is Troglodytes. Its length is up to 4.3 to 5.1 inches, it weighs up to 0.35 to 0.42 ounces, and it has a wingspan of up to 5.9 inches, with a lifetime of up to 7 years.

A house wren is a bird that feeds on insects, spiders, millipedes, and snails. Its song is the most distinguishing characteristic. House wrens are preyed upon by cats, rats, opossums, birds of prey, raccoons, squirrels, snakes, and woodpeckers.

Physical features include brown skin colorations, and feathers on the skin, with a top speed of 21 mph.

The most common wren in the Americas is the House Wren. This tenacious, tiny songbird has the largest range of any Western Hemisphere native songbird. It’s simple to find, with locations ranging from the middle of Canada to the southernmost tip of South America.

House wrens are common in backyards because they are tolerant of humans and pollution, and they have profited from urban development, which has fragmented woods into smaller green spaces. They may also be found in open woodlands, bushes, thickets, rivers, and savannas, particularly in the southern states.

The number of house wrens in the world is believed to be approximately 160 million. The songbird has a Least Concern conservation rating, and its population appears to be steady.

• These little birds aren’t beyond puncturing the eggs of other cavity-nesting birds or kicking out the hatchlings. They also do this to eggs found in their region by other wrens.

• Both guys and females compete in singing. The females who sang the most had fewer eggs lost to ovicide.

• If you wish to attract house wrens with a nest box, paint it red or green, as these are the wrens’ favourite colours.

• Paper clips, wires, staples, tacks, nails, hooks, fasteners, and bobby pins are among the items used by house wrens to construct their nests. Softer materials, such as grass, hair, lint from a clothes dryer, and feathers, are used to line the cup.

• House wrens can live for up to seven years, but this is regarded as exceptional.

Troglodytes aedon is the etymology for the house wren. Troglodytes is derived from the Greek words trogle, meaning “hole,” and dyein, meaning “dive in.” The wren’s habit of breeding in cavities and diving into holes and crevices in search of food or refuge is referred to as this. 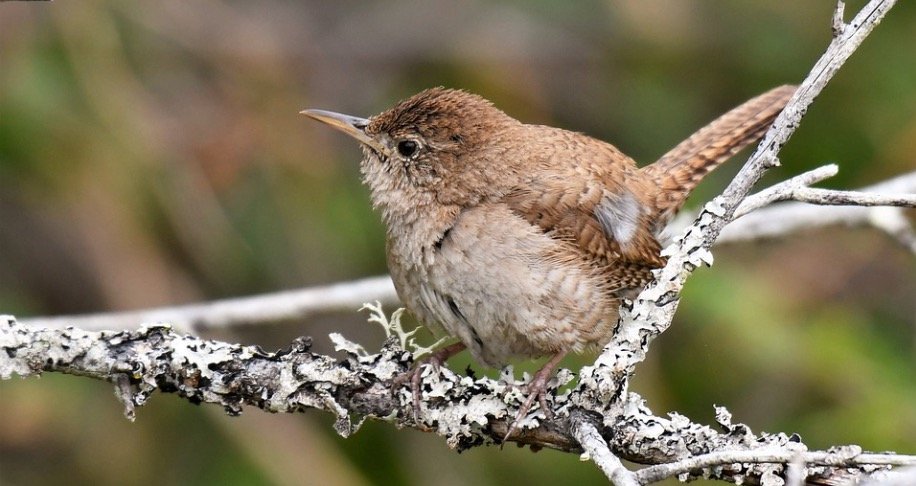 House Wrens are small, stocky birds with a scarcely visible white stripe over their eyes and a brown coloration all over. They are 4.3 to 5.1 inches long, weigh 0.35 to 0.42 ounces, and have a wingspan of 5.9 inches.

Male and female birds have similar plumage, but males may be somewhat bigger. The beak is long and has a small curvature, and the birds keep their short tails up when perching. The legs are pinkish, and the feet are large for the bird’s size.

House wrens are aggressive and sometimes hostile birds, despite their small stature. The male bears the brunt of the burden of guarding a territory, and he will attack an intruder by crouching, lowering his wings, spreading out and lowering his tail, and raising his hackles.

Even though they’re larger, females fight against other species who try to intrude on the nest. If a couple discovers a nest within their territory, they will stuff it with sticks to prevent it from being used. 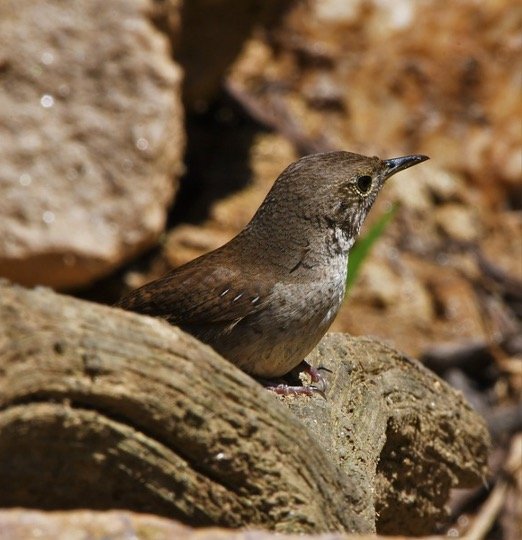 The house wren is a diurnal bird, meaning it is active throughout the day. They hop on the ground and do not fly very high, but they may fly quickly and steadily. This little songbird offers a diverse range of songs and cries.

There are at least 130 of them, according to scientists. Males may sing for up to ten minutes at a time, and when they mate, they sing a faint “whispering song.” Because they don’t open their beaks when they sing, they might be thought to be humming this melody.

This, according to biologists, is to keep the whereabouts of their partner hidden from other males. Starting in September and October, house wrens in the northern portion of their territory migrate to the deep south of the United States, southwest California, and Mexico.

They’ll reside in thickets and undergrowth once they arrive. They’ll be back in late winter or early spring, from late April to late May. To explore for breeding places, the males come first. When it detects huge predators in the neighbourhood, the house wren makes an alarm call. It’s a staccato succession of cheeps or chittering.

Insectivores, house wrens forage on the lower branches of trees and on the ground for caterpillars, grasshoppers, beetles, bugs, flies, and crickets. Spiders and millipedes, as well as insect pests including cabbage worms, tent caterpillars, ticks, and locusts, are all prey for wrens. Snails are also eaten because they require the calcium in their shells.

Because it is a small bird that frequently flies and nests close to the ground, the house wren is preyed upon by a variety of predators. Rats, foxes, opossums, raccoons, squirrels, snakes, and birds of prey such as kites and owls are among these creatures.

Woodpeckers avenge themselves on wrens when their eggs are damaged by the little birds. The brawny tiny songbird, on the other hand, isn’t afraid to strike back. While uttering its warning cry, it will hit the predator with its beak and claws.

Even before the eggs hatch, the nests of house wrens are dirty. Even though the parents carefully remove faecal sacs, dead chicks, and dud eggs, they are loaded with mites and germs and may even carry blowflies. 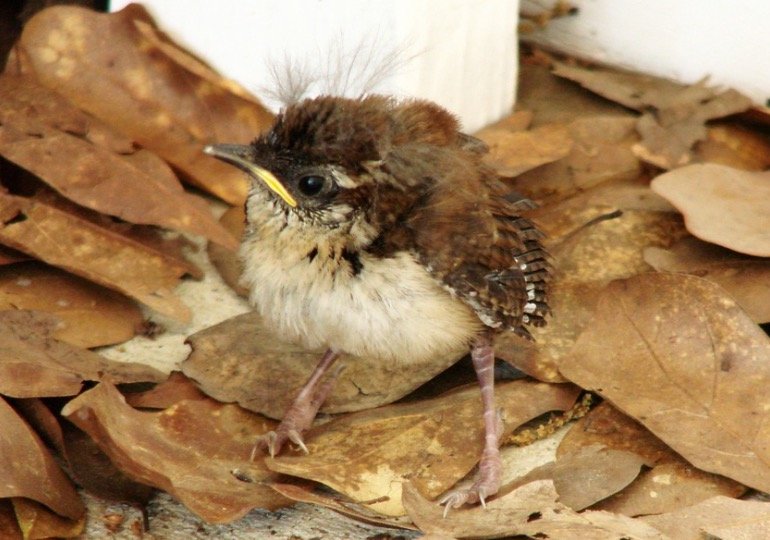 Males begin looking for appropriate nesting places as they return from their winter habitats. These are frequently found in cavities or holes, and might include objects such as abandoned clothes, gourds, and flower pots, as well as empty woodpecker nests and nest boxes.

He’ll start building nests in various locations and then sing loudly to attract the attention of a female. She will finish the nest if she is pleased. After he’s mated, the male continues to sing, but not as loudly.

The house wren’s mating season lasts from April to September, with the majority of eggs laid in mid-to late May. They’re brown and speckled, oval and the size of a dime. For one mating season, wrens are monogamous.

They will almost certainly not mate with the bird from the first brood if there are two broods in a year. A male will breed with a second female every now and then, but these broods are less successful.

He’s too preoccupied with the chicks he had with the first girl to assist with the second. The second female not only lacks a helper, but if she leaves the nest in search of food, her offspring are preyed upon or killed by other unmated wrens.

A female lays between four and eight eggs after completing the nest. The babies are blind and defenceless when they hatch after a 12-day incubation period.

Despite the fact that the female is the one that broods them, both parents feed them. After 15 to 17 days, they receive their first feathers and leave the nest one by one. Even so, their parents continued to feed them for another two weeks.

The number of ovicides and nestling murders drops dramatically after the wrens build their own nests and begin incubating eggs. This, according to scientists, is to prevent house wrens from mistakenly killing their own young, as Aedon did. House wrens can reproduce as early as a year old and have a lifetime of up to seven years.