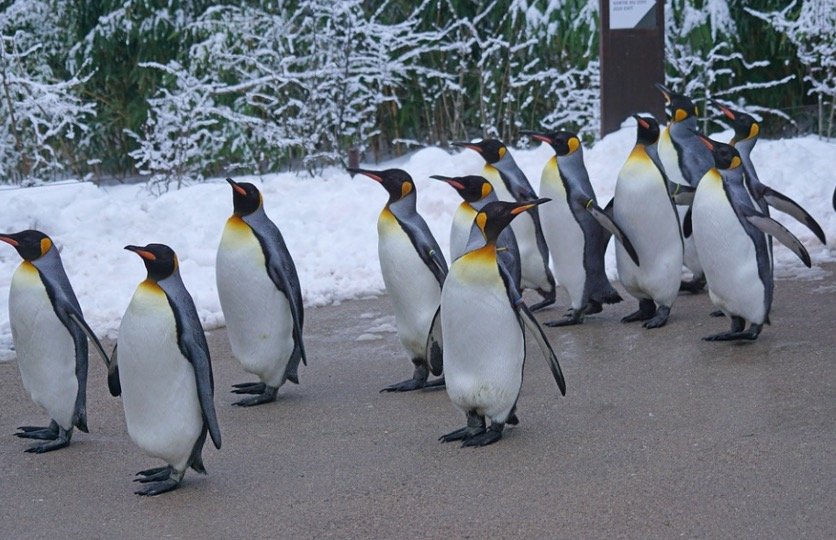 A king penguin (Aptenodytes patagonicus) is a carnivorous creature belonging to the Animalia family, phylum Chordata, class Aves, order Sphenisciformes, and family Spheniscidae. Its genus is Aptenodytes. Its height is up to 24 to 35 inches and it weighs up to 24 to 35 pounds, with a lifetime of up to 15 to 20 years.

A King penguin is a bird that feeds on krill, fish, and shrimp. The most distinctive characteristics are the large body size and yellow head markings. King penguins are preyed upon by leopard seals, sharks, and killer whales.

Physical features include yellow, grey, black, and white skin colorations, and feathers on the skin.

According to taxonomy, both the king and emperor penguins belong to the Aptenodytes genus. Both are accomplished swimmers who can dive to tremendous depths. Penguins like king penguins seek lanternfish, krill, and crustaceans to eat and feed their young.

With their dark, downy feathers, king penguin chicks stand out from the adults. It may take more than a year for the babies to become self-sufficient. 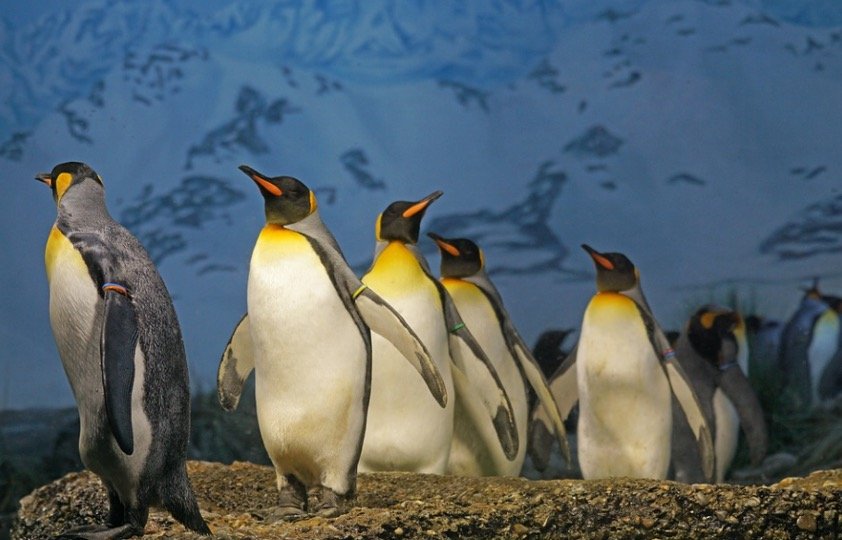 These animals can be found on sub-antarctic islands. Despite the fact that they have nearly vanished from the region, they are presently on the rise in Patagonia. Scientists have also discovered them in South Africa and on New York’s Staten Island!

They like beaches that are not covered in snow or ice, such as flat green or rocky beaches. In ideal areas, wind protection is provided by the neighbouring snowy mountains. During the day, they dive to considerable depths to hunt, but at night, they stay in shallow waters.

During the breeding season, the birds will migrate inland. During the 19th and 20th centuries, this species’ population was threatened. The idea of harvesting penguins for oil was realised when seals were killed for fur, and some species were nearly wiped off the map.

The king penguin population, on the other hand, is now classified as least concern. According to current estimates, there are 2.23 million breeding pairs in the world, and this number is growing.

A few zoos in the United States, Australia, and the United Kingdom have king penguins on display. The Lincoln Park Zoo in Chicago, Illinois; the Detroit Zoo in Detroit, Michigan; the St. Louis Zoo in St. Louis, Missouri; the Omaha Henry Doorly Zoo in Omaha, Nebraska; the Melbourne Aquarium in Victoria, Australia; and the Edinburgh Zoo in Edinburgh, Scotland, are among them. 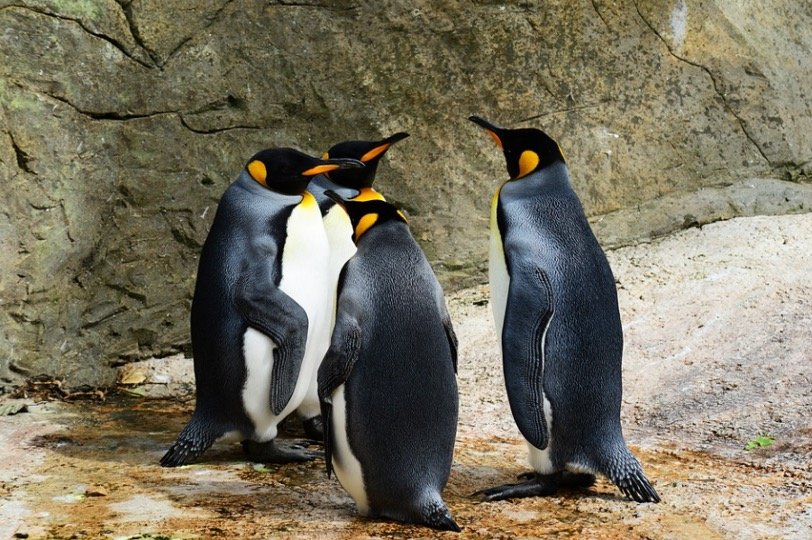 • King penguins can dive to depths of 300 metres, stay underwater for over 10 minutes, and traverse 1,200 kilometres when pursuing prey.

• In 2008, King Harald V of Norway knighted one of the penguins at the Edinburgh Zoo. Sir Nils Olav is his full name.

• Although king penguin colonies may grow to be as large as 200,000 birds, family members can recognise and locate one another because of their distinct vocalisations.

• The king penguin is the world’s second biggest penguin species, behind only the emperor penguin in terms of size. 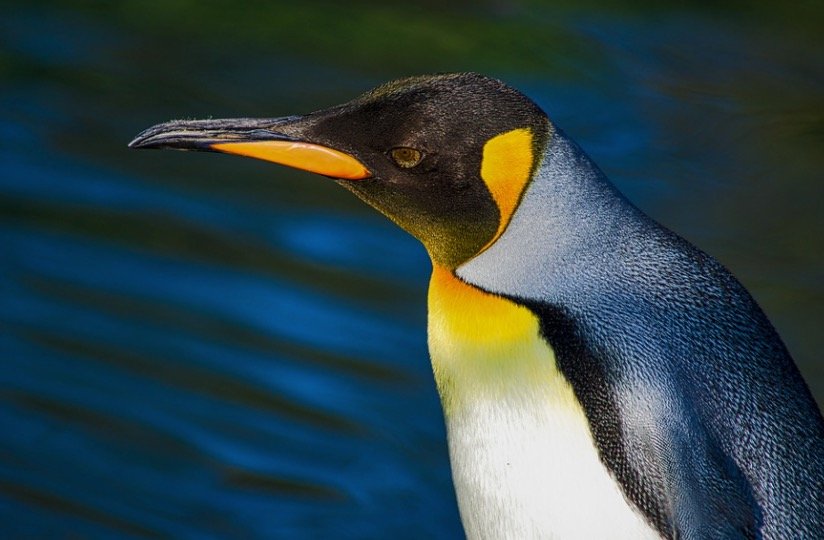 The king penguin is classified with all other penguins in the Spheniscidae family, but only the emperor and king penguins have their own genus: Aptenodytes, which means “featherless diver” in Greek.

These two birds are larger than all other penguins, have a long, thin bill, and vivid colors. They dive deeper and longer than others, and are the only two that deposit one egg in a nest made of their feet. Aptenodytes Patagonicus is the scientific name for the king penguin.

While the majority of these critters dwell in subarctic environments, fossil evidence places them in Patagonia at least 6,000 years ago, thus the second part of their scientific name.

The popular name for this species comes from European explorers in the early 1800s who thought they were the largest penguins on the planet. The explorers did not discover the larger emperor penguin until Captain Cook’s second journey. 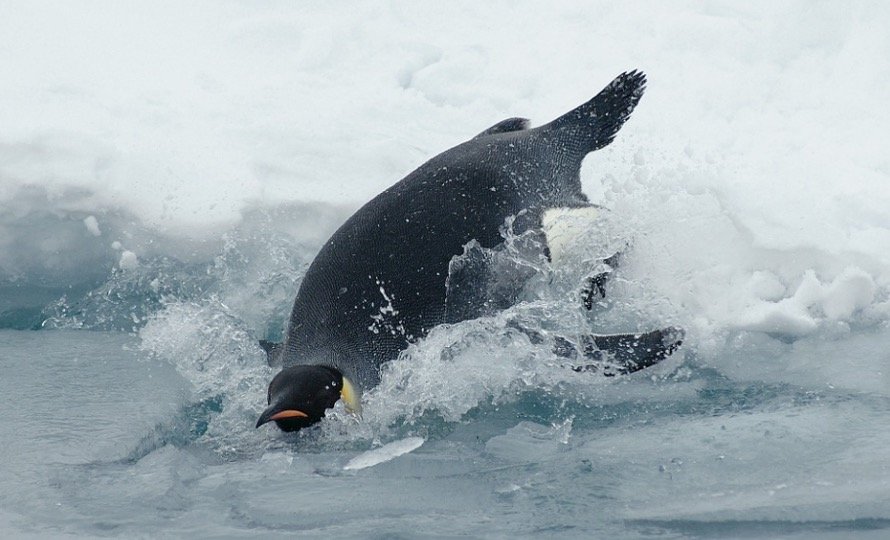 The king penguin is the biggest of the penguins. Males are somewhat heavier than females, with the typical adult weighing 35 pounds. They stand 3.1 feet tall on average, or roughly the same height as a typical human toddler.

King penguins are arctic-adapted creatures with four layers of feathers – 70 in only a square inch of skin! Down feathers make up the three layers nearest to the body, while the outer layer is oiled for waterproofing.

An infant, on the other hand, is not impervious to water. As a result, they do not enter the water until their downy brown feathers have developed into adult black and white feathers. 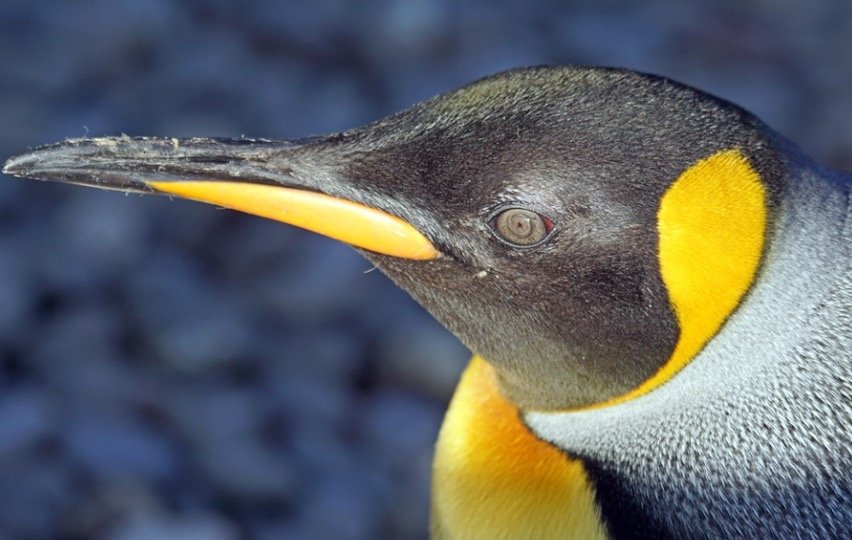 The heads of king penguins are black, with orange plumage at the ear and throat. As it approaches the white breast, the plumage fades to yellow. In the water, their two-toned colouring helps them blend in with predators and prey.

When a creature looks at the penguin from below, its white belly blends seamlessly with the sunlight surface. From above, the penguin’s black coat helps it blend in with the dark seabed.

To hold their eggs and small chicks, they have sturdy black legs, and their beak, which has orange on both sides, is lengthier than any other penguin species. These birds have a strong sense of community.

They do not interact with penguin species such as the Gentoo, Magellan, or Royal, despite sharing space with them. Adults frequently quarrel with one another, with the most powerful individuals gravitating to the centre of their huddles.

They are quite interested in humans and will approach visitors to examine them. Tens of thousands, if not hundreds of thousands, of breeding pairs may be found in their colonies.

The colonies’ size allows them to cluster together for warmth. Communal crèches are also formed by females. When partners or parents return after foraging, these species recognise each other by distinct vocalisations. Instead of hopping, king penguins prefer to stroll or toboggan.

They are strong swimmers who can reach speeds of 3 to 6 miles per hour. When looking for food, they have been spotted as far as 1,200 miles away and 1,000 feet underground.

These birds forage in groups. Their high energy consumption necessitates a significant quantity of food for their size, since they may dive to the ocean floor up to 100 times every day!

Lanternfish, as well as various types of fish, squid, tiny crustaceans, and krill, may be found there. Adults may eat up to 450 fish every day, and they feed their young by regurgitating the food they eat.

During these times, an adult will consume 8 pounds of food per day. That’s the equivalent of a typical adult consuming 25 huge pizzas! Chicks are born with reserves of body fat that allow them to survive for up to three months while waiting for adults to hunt and supply food, allowing them to lose up to 70% of their weight.

When seeking its meal, the king penguin dives to depths of 54–110 yards, although they have been seen to dive as far as 328 yards. They can stay submerged for over ten minutes.

A salt-filtering capillary gland sits above their eyes, allowing them to drink ocean water. This is advantageous since fresh water sources might freeze.

King penguins are classified as least concerned. Because their environments are frigid enough to be sparsely inhabited, the human effect on their numbers is minimal. They have a diverse diet, so overfishing of krill and climate change will have little effect on their nutrition.

However, it appears that global warming has an impact on successful breeding. Despite global warming, the population of king penguins is expanding. Although these invertebrates are not a primary food source for any animals, they do have predators.

Because the penguin environment is difficult for terrestrial creatures, the only adult dangers are sea species. Adults are more at risk from leopard seals and orcas, which hunt in the water.

Skuas, sheathbills, southern black-backed gulls, and giant petrels are powerful enough to catch eggs and young penguins abandoned on land by their parents. 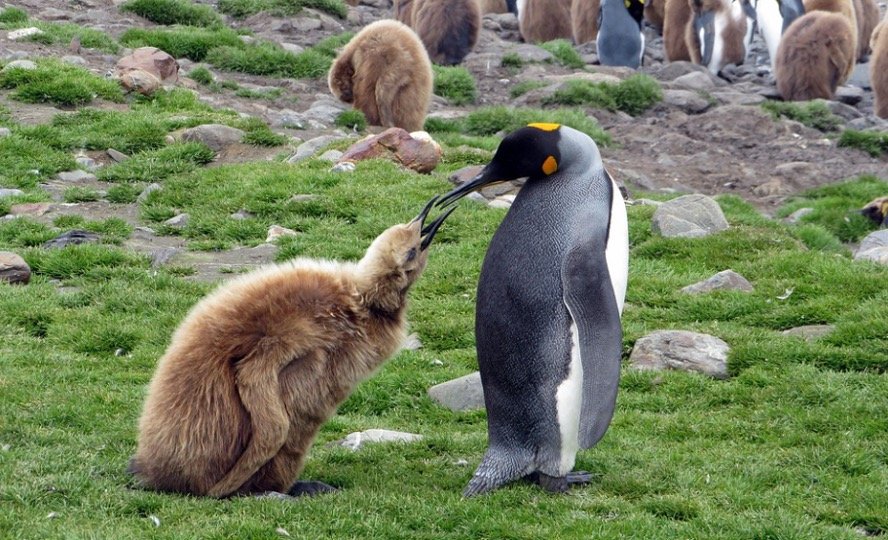 King penguins reach sexual maturity at the age of three, although they are unlikely to start reproducing until they are six years old. A moult occurs during the mating season, which occurs in September, October, or November.

Those who are moulting or roosting rather than reproducing are separated from the rest of the flock. When king penguins moult, they go inland and stay out of the water until their new waterproof feathers come in.

This lasts around three weeks, during which time they rely on stored body fat to live. Male king penguins spend anything from a few hours to several days raising their heads high, yelling, and putting their flippers out to attract a partner when they are ready to mate.

When both birds shake their heads at the same moment, the match is declared successful. In three years, king penguins only breed twice. The only penguins that do not breed are the king and emperor penguins.

Rather, between November and April, king penguins deposit one pale green egg and incubate it using a warm flap of skin that hangs over their webbed feet, on which the egg lies. After around 54 days, the egg hatches.

The newborn is born naked and must spend the next 39 days under the warm skin of a parent. Males and females alternate guarding and hunting the infant. For an additional nine months, chicks congregate in a group known as a crèche, making it more difficult for predators to single out one infant.

The chick eats food that has been regurgitated by adults. Other penguin kids travel from egg to swimming in a single summer and hunt regardless of food supply, whereas king penguin newborns require a long hunting season.

Because this takes over a year, king penguin colonies are occupied all year. In the wild, king penguins may live up to 25 years, while in captivity, they can live up to 30 years. Because they were born abroad, the ages of those in zoos are unclear, although zookeepers believe that some are in their mid-30s.