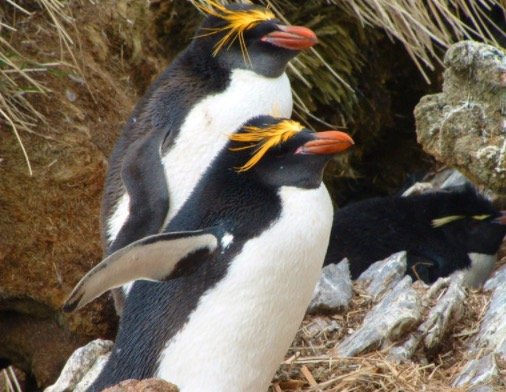 A macaroni penguin (Eudyptes Chrysolophus) is a carnivorous creature belonging to the Animalia family, phylum Chordata, class Aves, order Sphenisciformes, and family Spheniscidae. Its genus is Eudyptes. Its length is up to 20 to 28 inches, it weighs up to 7 to 14 pounds, and it has a wingspan of up to 31 to 39 inches, with a lifetime of up to 15 to 20 years.

A macaroni penguin is a bird that feeds on fish, squid, and crustaceans. Macaroni penguins are preyed upon by leopard seals and killer whales.

Physical features include brown, yellow, black, and white skin colorations, and feathers on the skin, with a top speed of 22 mph.

The Macaroni penguins have royal appearances and can dive to a depth of 200 feet in the ocean. The Antarctic and sub-Antarctic peninsulas are home to macaroni penguins. Krill, fish, squid, and crustaceans are among their favourite foods.

Hundreds of thousands of penguins reside in large colonies of these birds. They have a vivid orange crest, or tuft of feathers, on their heads and are black and white. The macaroni penguin’s recognised conservation status is fragile. 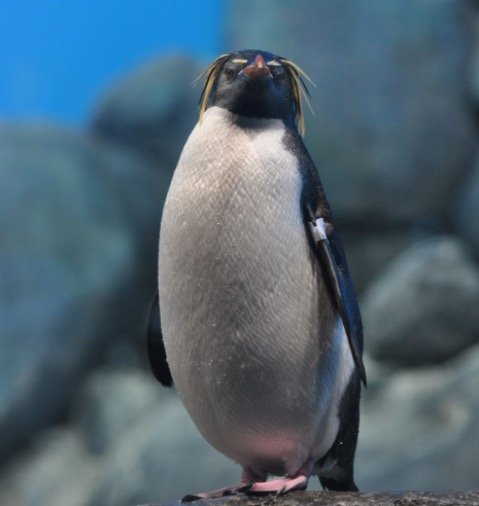 During the mating season, which begins in October, macaroni penguins come to land to join a huge colony of breeding couples. A male and female couple stay on land with their young until April or May, after producing eggs in November.

They then return to the water until it’s time to breed again. There are an estimated 11 million macaroni penguins on the planet. Unfortunately, because of water contamination and a reduction in their food supply, their numbers are dwindling.

As per the International Union for the Conservation of Nature (IUCN), their conservation status is Vulnerable. To support the macaroni penguins, there is now monitoring and protection in place, but more might be done.

• Macaroni penguins can swim up to 15 miles per hour.

• Macaroni penguins can walk, jump, and climb, in addition to waddling.

• Female macaroni penguins normally only lay two eggs, and one of them may be discarded if it is too small.

• To help in the digestion of shelled animals, macaroni penguins ingest small stones. 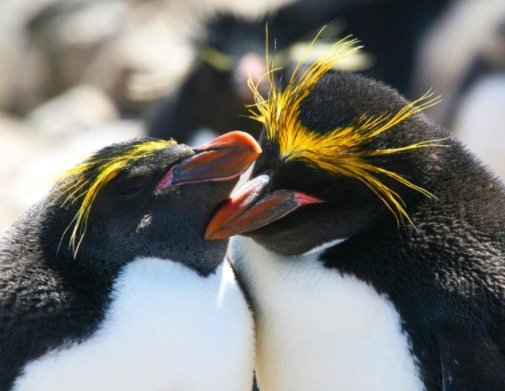 The macaroni penguin is the scientific name for the Eudyptes Chrysolophus. The Greek word eudyptes means “excellent diver,” while the Greek word chrysolophus means “golden” and “crest.”

This bird is a member of the Spheniscidae family and the Aves class. It got its popular name from its brightly coloured crest. Sailors who observed this unusual penguin in the 18th century began to refer to it as a macaroni.

A slang term for someone who dressed in a flamboyant, colourful manner was “macaroni.” The bird also reminded them of the man who “put a feather in his cap and titled it macaroni.” in the song “Yankee Doodle…”

They feature webbed feet that aid in swimming, as well as a tail that acts as a rudder, directing them in the desired direction. When on land, macaroni penguins must cross rocky terrain, sandy regions, and cliffs.

They can also jump or stroll across slick rocks thanks to their webbed feet. On land, though, a macaroni penguin’s eyesight is poor. However, while swimming in the water, these birds have excellent vision. They really utilise their superb underwater vision to locate and evade predators like leopard seals and killer whales.

Additionally, these birds may stay under for up to 3 minutes before needing to emerge for air. They have a coating of fat on their bodies that keeps them warm in the Antarctic environment, and their feathers are engineered to enable water to run off them rather than absorb it as they emerge from the freezing water. What if I told you that pensive penguins may puff out their feathers to allow air to move beneath them and provide additional warmth.

Colonies of macaroni penguins live together. More than 100,000 penguins can be seen in some colonies. Another way these birds protect themselves from predators is by living in huge flocks.

The majority of penguins will be able to flee the colony if a seal attacks. These penguins are also obnoxious and belligerent. Barks, chirps, yelps, and brays are how they communicate. Male penguins frequently engage in combat with one another, locking beaks and flailing wings when they pass across each other’s territory.

Strange penguins are not treated with kindness. As a result, it’s fairly uncommon to observe a penguin with its head buried towards its breast as it moves around a colony. This posture conveys that the penguin does not wish to interact with or battle with anybody else.

You’d think that finding a penguin’s family in a colony with thousands of penguins moving around and generating noise would be difficult. However, it turns out that it is not a difficult task. Penguins listen for the distinct noises emitted by their relatives in order to locate family members in a vast colony.

Because these penguins are carnivores, they feed on krill, tiny fish, squid, and crustaceans. To feed krill and other sea life with a hard outer shell, macaroni penguins ingest small stones to aid in the grinding up of the shells.

Every year, they consume a large number of these little invertebrates. To put everything in perspective, a car weighs two tonnes, so think how much krill that is.

Macaroni penguins are preyed upon by leopard seals and other species of seals, as well as killer whales. These critters are fast and strong enough to catch macaroni penguins swimming in the water or trying to get from the ocean to the rocky shore.

Sea birds, such as petrels and skuas, prey on the eggs deposited by macaroni penguins. Because this penguin’s nest is so shallow, the eggs are easily visible to this and other passing birds. Humans are also a threat to these penguins.

They can be caught in the nets of fisherman attempting to catch other species of animals. Another hazard to the health and population of macaroni penguins is oil contamination in the ocean waters. The penguins’ official conservation status is Vulnerable. Scientists think they are dwindling in number as a result of pollution.

Male and female penguins congregate onshore in a colony to procreate when they are around five or six years old. This normally occurs in October, which is Antarctic summer. To attract female penguins, male penguins bow their heads, shuffle from side to side, and bark.

If a male and female have already visited the breeding grounds, they will return with the same mate. In early November, the female lays two eggs. The eggs are guarded by both the male and female until they hatch 33 to 37 days later. The newborn newborns are only a couple of ounces in weight.

Chicks and nestlings are the names given to newborn penguins. Because they don’t have all of their feathers when they’re born, the parents of penguins must work extra hard to keep their young warm until their feathers grow. They don’t move much until they’re older, but they can see what’s going on around them.

The orange/yellow crest of these penguins is not present at birth. A penguin’s crest does not fully grow until they are 3 or 4 years old. While the mother penguin feeds the chicks, the father penguin continues to guard them from sea gulls and other predators.

The mother penguin feeds her kids chewed-up fish so they can digest it readily. A young macaroni penguin stays with other chicks in the colony after 25 days to continue growing for another 60 to 70 days.

While they are gone from the nest, they keep each other warm and safe. They’re ready to venture out into the water and seek food at that point. In the wild, most macaroni penguins do not survive to be more than 20 years old.

However, one penguin has established a record that will be difficult to beat! Mickey, who resides at the Pittsburgh Zoo, celebrated his 35th birthday in 2019. She is one of the United States’ oldest macaroni penguins.