A harpy eagle (Harpia harpyja) is a carnivorous creature belonging to the Animalia family, phylum Chordata, class Aves, order Accipitriformes, and family Accipitridae. Its genus is Harpia. Its length is up to 35 to 40 inches, it weighs up to 11 to 20 pounds, and it has a wingspan of up to 2 metres, with a lifetime of up to 20 to 35 years.

A harpy eagle is a bird that feeds on sloths, monkeys, lizards, rodents, small deer, and birds. The crown of feathers is the most distinguishing characteristic. Harpy eagles are preyed upon by other harpy eagles.

Physical features include black and white skin colorations and feathers on the skin, with a top speed of 50 mph.

The harpy eagle is a dangerous predator, a devoted companion, and a kind parent. The harpy eagle is a stunning bird that lives deep within the Western Hemisphere’s rainforests. This species stands out in its native habitat with its black and white hues, royal crown of feathers, and long, beautiful tail.

Despite dwindling population numbers, it is now found throughout a large expanse of areas in the southern Americas. Continued habitat degradation and poaching, meanwhile, may put it at risk of extinction.

In the Western Hemisphere, the harpy eagle tends to live in the top canopy levels of dense lowland tropical rainforests. In quest of food, it will even travel through broad plains or scant woodlands.

The distribution of this species in Mexico and Central America is small and irregular. Its major range encompasses practically all of Brazil as well as certain neighbouring nations such as Venezuela, Colombia, Bolivia, and Peru, excluding the Andes’ high parts.

Harpy eagles make their nests 90 to 140 feet above the earth, mainly in kapok or silk-cotton trees, where the young chicks are protected from practically all predators except other birds. 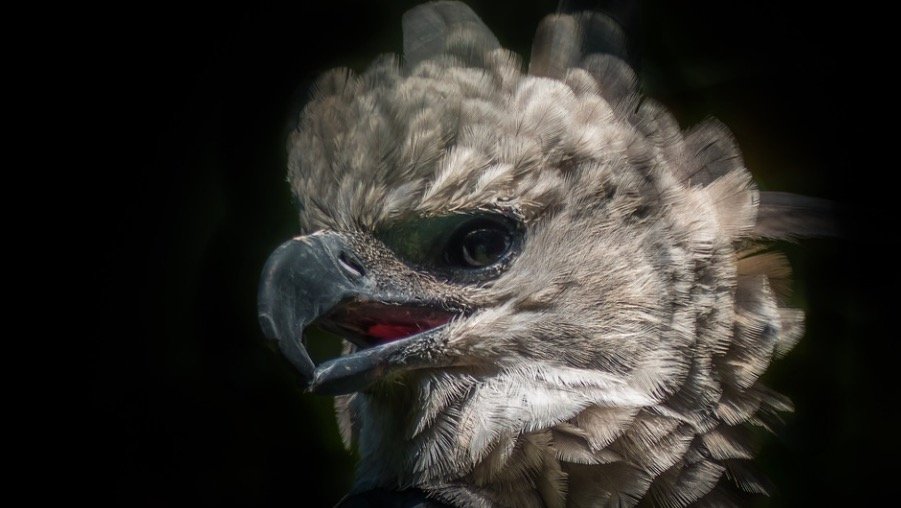 The harpy eagle is now listed as near threatened on the International Union for Conservation of Nature (IUCN) Red List, which rates the conservation status of numerous species throughout the world. Despite the lack of accurate estimates, population numbers appear to be declining in most of Central America.

The species is more widespread along the beaches, but less so in the interior and more distant sections of Brazil. According to some research, there are fewer than 50,000 individuals left in the wild.

Persistent loss and degradation of the Brazilian Amazon for human development may put the species in jeopardy in its natural habitat. The species might have lost up to half of its native habitat in only 50 years.

Experts are concerned that Amazon’s demise may become permanent at some point. Given the enormous amount of work necessary to raise just one chick, populations may take a long time to recover once they begin to decline.

Many conservation organisations, including the Peregrine Fund, are working to avoid additional population losses and return the bird to its previous home.

Local governments will need to make more efforts to protect the remaining rainforest habitat from future damage in order to boost harpy eagle numbers. They’ll also have to repair what’s already been lost. 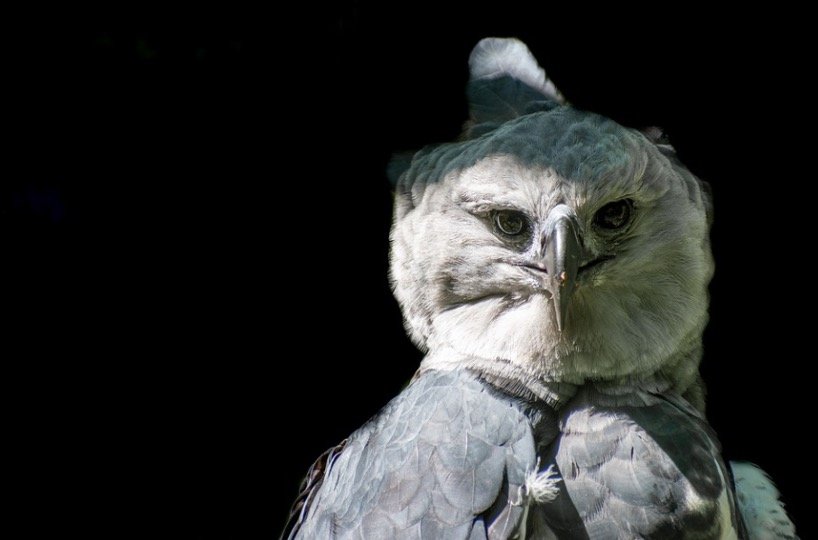 • Some Latin American countries have adopted the harpy eagle as a national symbol. It has even been designated as Panama’s national bird.

• The species is named after a half-human, half-bird monster from Greek mythology.

• The talons of the harpy eagle are the largest of any eagle species. They’re roughly the size of a grizzly bear’s claws, measuring 3 to 4 inches long. This enables them to pull huge prey off the ground with ease.

• When threatened, it may manually raise its trademark feather crown.

• The harpy eagle has exceptional vision, which it can use to find tiny prey from hundreds of feet away.

Harpia harpyja is the etymology of the harpy eagle. The royal hawk and the American harpy eagle are two other names for this species. Perhaps because it gave such an unusual sight to scientists and travellers, the species is named after the half-human, half-bird monsters of ancient Greek mythology.

Harpy eagles are the sole extant members of the Harpia genus. Its closest relatives are the crested eagle and the New Guinea harpy eagle, whose territories largely overlap. It belongs to the Accipitridae family of eagles, which includes hawks, kites, harriers, vultures, and other eagles. 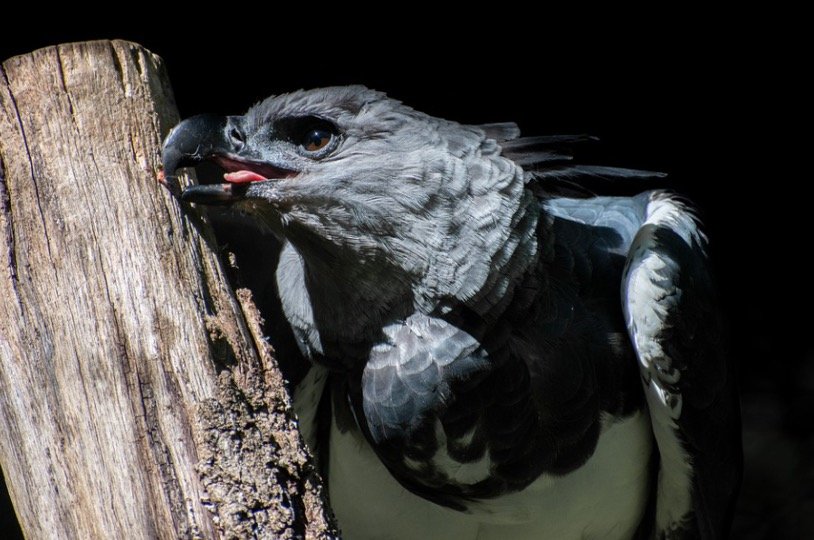 Harpy eagles are easily identified by their unusual plumage, which includes a grey head, a white underbelly, and a black back, wings, and breast. The legs are mostly white with black patterns on them.

Their feet are yellow, while their beaks, eyes, and talons are black or reddish in hue. When frightened, it may manually raise a rich crown of long black features on the top of its head. The crown feathers may also assist in guiding sound to the bird’s ears, according to some experts.

The harpy eagle is one of the world’s biggest eagle species. A person may grow to be 40 inches tall and weigh up to 20 pounds, which is roughly the size of a medium dog. Females are much heavier than males, although there are few morphological differences between the sexes.

Harpy eagles are very competent hunters with keen vision and the ability to traverse deep woodlands using their wings. Their keen eyesight allows them to spot prey as little as an inch across at a distance of 650 feet.

They also have excellent hearing to compensate for their weak sense of smell. Harpy eagles may reach high speeds of roughly 50 miles per hour for brief periods of time, although they are not known for their speed.

Their large tail feathers were developed to aid in steering and navigation around trees and foliage. Harpy eagles are solitary animals that prefer to hunt alone or in pairs. Occasionally, a maturing adolescent will pitch in as well.

They may attack prey from above or below, and they prefer to strike rapidly before the victim notices them. Whistles, clicks, and croaks are among the vocalisations and visual displays used by harpy eagles to interact with one another. When they’re around the nest, they’re more vocal, and when they’re hunting, they’re nearly entirely silent.

The harpy eagle’s diet consists mostly of sloths and monkeys, such as capuchins, howler monkeys, and spider monkeys, possibly because these creatures are easier to notice from a tree perch.

They may also eat lizards, rats, small deer, and other birds to augment their diet. Their very long and sharp talons allow them to rapidly overpower and kill prey by applying hundreds of pounds of pressure at a time.

They can also seize and transport prey weighing up to 17 pounds from the ground in a single diving action.If the prey is too heavy for the eagle to carry, the eagle will only consume a portion of it before returning to the nest.

While waiting for prey, these patient hunters may stay perched in the same spot for up to a whole day. This species has the luxury of being patient. It can go for up to a week without needing to be fed.

When it does manage to make a kill, it can graze on the carcass for several days at a time. Harpies play an important role in regulating local prey populations, which, if unchecked, could pose a threat to other species.

In the wild, a fully developed adult harpy eagle is an apex predator with few natural predators. On the other hand, young chicks are vulnerable and might be an attractive target for other birds of prey.

That is why, at all times of the day, one of the parents must be attentive to the protection of the nest. Large cats and other terrestrial predators find the nest nearly impenetrable due to its sheer height above the ground.

The most serious threat to the harpy eagle’s existence is the degradation of tropical rainforests due to logging and agriculture. This species is particularly sensitive to habitat loss due to the quantity of space required for its native hunting region.

Harpy eagles may also fall prey to a hunter or local farmer, who may regard them as pests or easy targets despite the fact that they only eat domestic cattle on rare occasions.

Harpy eagles are monogamous, and their selected mates appear to build lasting ties with them. Their extremely personal gestures of affection, such as chirping at each other or rubbing their bills together. It’s thought that this will help the pair form a stronger relationship.

Many of the responsibilities of a married couple are shared or split between them. The building of a five-foot-diameter nest comprised of wood, grass, and animal hair is one of the most crucial duties.

Some pairs may use many nests over the years, but most tend to use the same nest year after year, repairing and rebuilding it as needed. The breeding season occurs in April or May, at the start of the wet season. During this stage, the partner will decide to mate many times over the course of a few days.

After mating, the female usually lays two eggs at a time, but only raises one youngster at a time. If two chicks hatch, the parents are likely to abandon the second one to starvation. If the first chick dies, though, the second one has a fair chance of surviving. An egg takes over two months to properly incubate.

The female is in charge of the majority of the incubation, while the male is mostly responsible for finding food. For the first several months of its existence, the young chick will be completely white.

The chick will fully mature and gain all of its feathers after six or seven months. The chick will be cared for by both parents for the first ten months of its existence. Even after they have learned to care for themselves, the young birds may stay close to their original nest for a long time.

The female only lays eggs once every two or three years due to the chick’s protracted maturation time. To reach full mature pigmentation, it normally takes three years.

After four or five years, the eagle reaches full maturity and frequently returns to the same region where it was born. In the wild, a harpy eagle may live anywhere from 25 to 35 years.