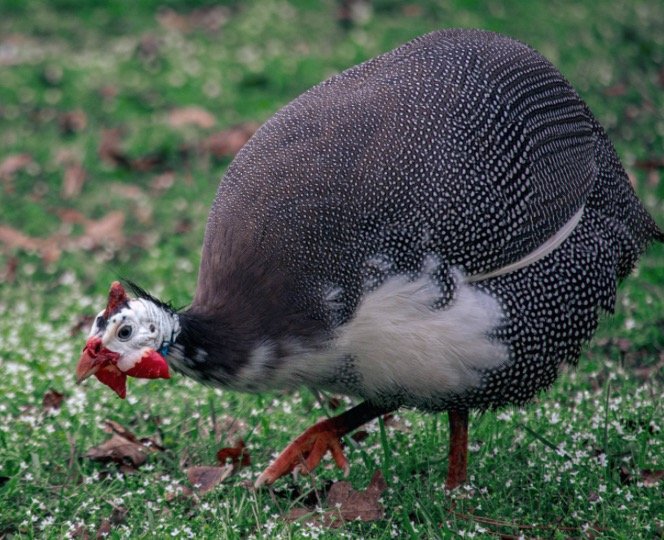 A Guinea fowl is an omnivorous creature belonging to the Animalia family, phylum Chordata, class Aves, order Galliformes, and family Numididae. Its length is up to 16 to 30 inches, it weighs up to 1.5 to 3.5 pounds, and it has a wingspan of up to 59 to 71 inches, with a lifetime of up to 10 to 20 years.

A Guinea fowl is a bird that feeds on insects, worms, and berries. The large body size and bald neck are the most distinguishing characteristics. Guinea fowl are preyed upon by large mammals and reptiles.

A guinea fowl is a ground-feeding bird that looks like a turkey or a pheasant. It is frequently spotted traversing the African plains, nibbling at the ground for sustenance.

There are seven to ten species of guinea fowl in the guinea fowl family, each with its own distinct look and habits. They occupy a similar ecological niche as many other large-bodied birds in other parts of the world.

Guinea fowl are birds that are only found in sub-Saharan Africa’s warm and tropical woods, savannas, scrublands, farmlands, and even semi-deserts. Occasionally, flocks of these birds will be seen in metropolitan settings.

To cope with the harsher African climate, they have developed a number of modifications. Among all the species, the helmeted guinea fowl is arguably the most numerous and ubiquitous.

The helmeted guinea fowl has nine recognised subspecies, as well as a domesticated variation, and it occupies a large area south of the Sahara. The tamed helmet guinea fowl is the only member of this family that has been widely introduced.

When the mating season approaches, the bird constructs communal nests in shallow depressions that are separated. These nests are frequently lined with light vegetation and kept under cover to keep predators away from the eggs.

Usually, the male is the one that keeps watch over the nest. These birds are a widespread family that may be found throughout most of Sub-Saharan Africa. Seven species are classified as least concerning, the highest possible classification, by the IUCN Red List, which records their conservation status.

The white-breasted guinea fowl is the only species in danger of extinction. Population estimates are difficult to come by, but it’s estimated that there are at least 10,000 adult vulturine guinea fowl surviving in the wild.

Compared to other animals, these birds have a few benefits. For starters, they can adapt to a wide range of environments and conditions, from forests to plains. Second, because domesticated birds are grown for meat, humans seldom bother wild guinea fowl.

In fact, because humans hunt and remove their larger predators, human activity may actually help them. 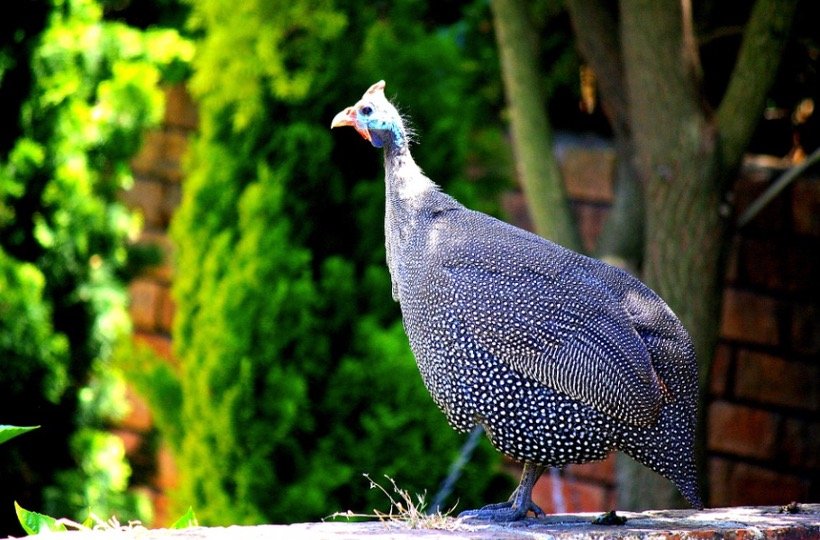 • The helmet guinea fowl is the only member of the family that has been domesticated as a food source by humans, serving in a similar capacity to the chicken. Although their naturally loud cries serve as a cautionary tale against predators or keep Lyme-carrying ticks and other pests under control, they are often mixed in with other poultry.

• The guinea fowl is a bird that can crossbreed with chickens and pea fowls on occasion. They can sometimes produce viable children together, depending on their compatibility.

• The majority of guinea fowl can go for lengthy periods of time without drinking. 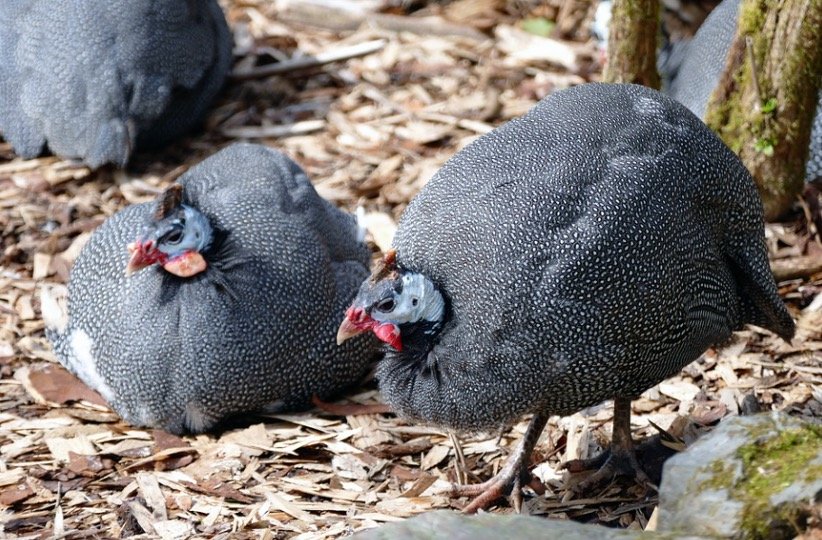 Numididae is the scientific name for the guinea fowl family. This is the Latin name for the ancient Numidian area, which was formerly part of the Roman Empire but is today part of Algeria.

The scientific name is a bit misleading, because all of the species are endemic to Sub-Saharan Africa, not Algeria. Quail, partridges, pheasants, peacocks, chickens, and turkeys are all members of the Galliformes order. 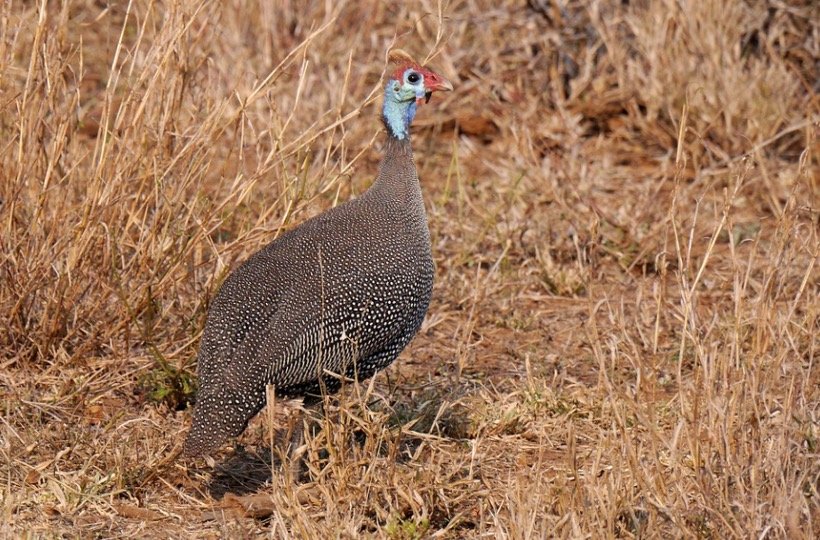 These birds have a large, curving body with a small beak, a slumped posture, a long neck, and a grizzled, featherless head that is likely used to release excess heat. They range in length from 16 to 28 inches, and weigh up to 4 pounds.

The majority of guinea fowl species have black or brown feathers with white spots, but the white-breasted guinea fowl has a white-colored breast as well. A mixture of red, blue, brown, or tan is frequently used to cover the head. A few species, however, have some unusual accessories.

In every other way, this species is a true guinea bird. These birds are highly sociable and gregarious, forming flocks of varied sizes. These communal flocks normally spend the day pecking the ground for food and digging through the earth with their powerful claws.

They are most active in the morning and late afternoon when the heat is more bearable, although they sleep in the trees at night. The flock keeps together and travels in a single file line at times.

The birds communicate with one another by making loud, repeated noises that are exclusive to each sex. Although they are normally pleasant, conversations between men can occasionally devolve into deadly and bloody conflicts.

To make themselves appear larger, males will spread their wings, bristle their feathers, and make aggressive cries.They will also charge towards each other with the purpose of injuring or harming one another.

Despite its powerful breasts and wings, the guinea fowl is not a migratory bird or a great flier. It is a terrestrial bird that prefers to stay on the ground and avoid predators, but its wings allow it to flee from dangerous circumstances in brief bursts of flight. 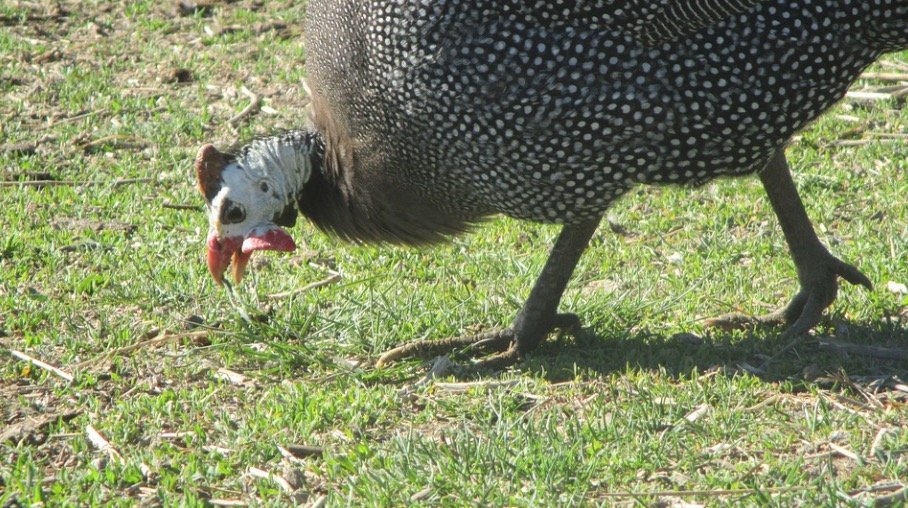 These birds are found in the middle of the food chain. It eats a large amount of tiny prey and foliage, but it is also a popular food source for many of Africa’s most ferocious predators.

The guinea fowl is an omnivorous bird that eats roots, tubers, seeds, reptiles, rodents, insects, and fruit, among other things. The helmet guinea fowl is noted for its ferocious eating, making it an excellent home pest controller.

Crocodiles, snakes, leopards, and other large cats are among the likely predators of these birds. Any predator that would attack a chicken in a domestic context would also attack a chicken, including foxes, wolves, coyotes, and bears. These birds have certain protections, such as the ability to fly, but they are no match for a ferocious predator in a fight.

Over the course of its existence, the helmeted guinea fowl develops a tight monogamous connection with a single mate, making it the most researched and well-understood species. At any given moment, a couple’s nest can hold up to 20 eggs.

However, these nests are communal in nature and may include eggs from numerous pairings. These birds are seasonal breeders; therefore, they lay eggs in the spring and summer, immediately after the peak of the yearly rainfall, when supplies are plentiful.

After around four weeks of incubation, the baby chicks, also known as keets, emerge from the eggs. The birds can walk about with their parents right away since they are born with downy feathers, but it takes them many months to mature, learn the ropes, and acquire their complete flight feathers.

To offer their children the best opportunity of success, the parents are heavily involved in their care. They have a natural tendency to divide responsibilities: the mother incubates the eggs, while the male monitors and protects them.

The children are ready to start a new independent life after around eight months to a year. They will attain sexual maturity at the age of two, but the female will only be able to procreate for a short period of time.

By the age of five, her capacity to produce eggs has usually slowed, and by the age of eight, it has totally stopped. Guinea fowl have an average lifespan of 10 to 15 years if they survive long enough.