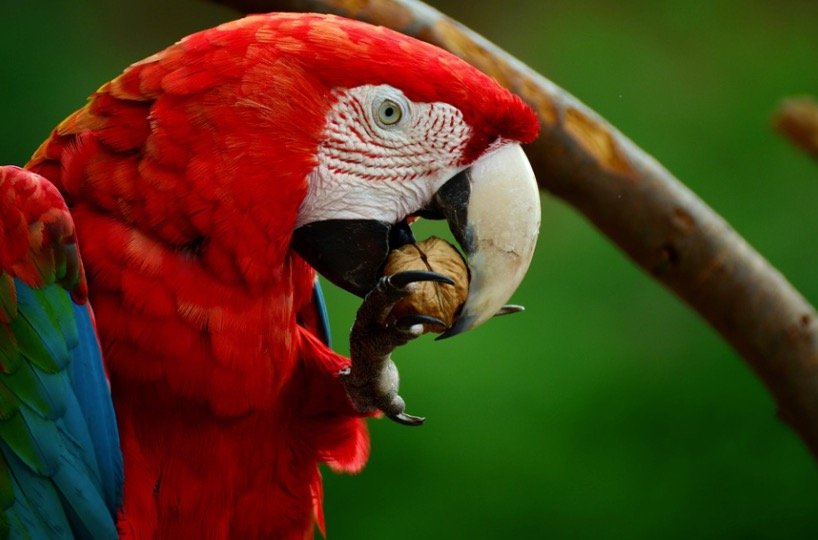 A parrot is an omnivorous creature belonging to the Animalia family, phylum Chordata, class Aves, order Psittaciformes, and family Psittacidae. Its height is up to 3.5 to 39 inches, it weighs up to 0.02 to 5.9 pounds, and it has a wingspan of up to 5.9 to 56 inches, with a lifetime of up to 40 to 80 years.

A parrot is a bird that feeds on insects, fruits, nuts, and seeds. The most distinctive characteristics are its large, colourful body and curved beak. Parrots are preyed upon by humans, monkeys, and large birds.

Physical features include blue, red, yellow, green, and white skin colorations, and feathers on the skin, with a top speed of 15 mph. 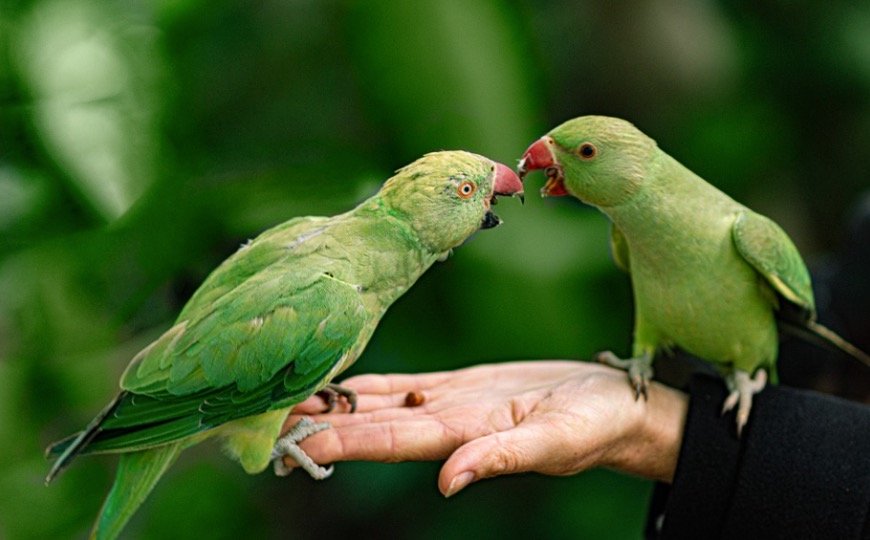 Parrots have been kept as pets since ancient times, and they have a boisterous and flamboyant temperament. They’re known for their humour, entertainment, and cleverness, but they’re also known for being quite loving.

They are well-known for their ability to imitate a wide range of sounds, including human speech. 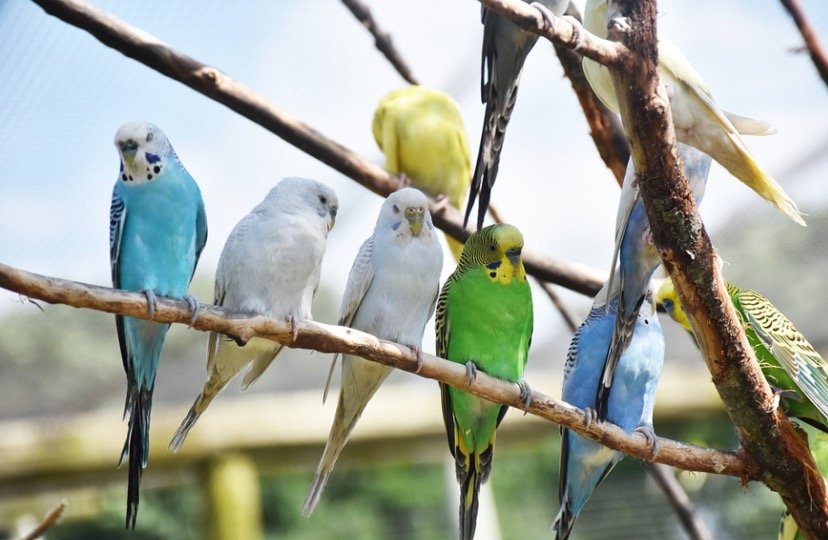 1. The grey parrot is an African bird that is medium-sized. The majority of these birds are grey, with a black beak and red tail feathers.

2. Macaws range in size from the little Hahn’s Macaw, which is approximately 12 inches long, to the huge Hyacinth Macaw, which measures around 40 inches long. Macaws have long tails and huge beaks and are endemic to Mexico, Central America, and South America.

3. Cockatiels are little, pointy-tailed birds that are only found in Australia. While domestic cockatiels come in a variety of hues, wild cockatiels are mostly grey with white flashes on either wing and orange patches on the sides of their faces.

4. The budgerigar, often referred to as a parakeet, is a small Australian bird with a long tail. These brilliant green birds have yellow heads and black banding on their wings.

5. The Amazon parrot is a moderate, short-tailed parrot endemic to South America, Central America, and the Caribbean. The primary hue of these birds is green, with brilliant accent colours that vary by species. 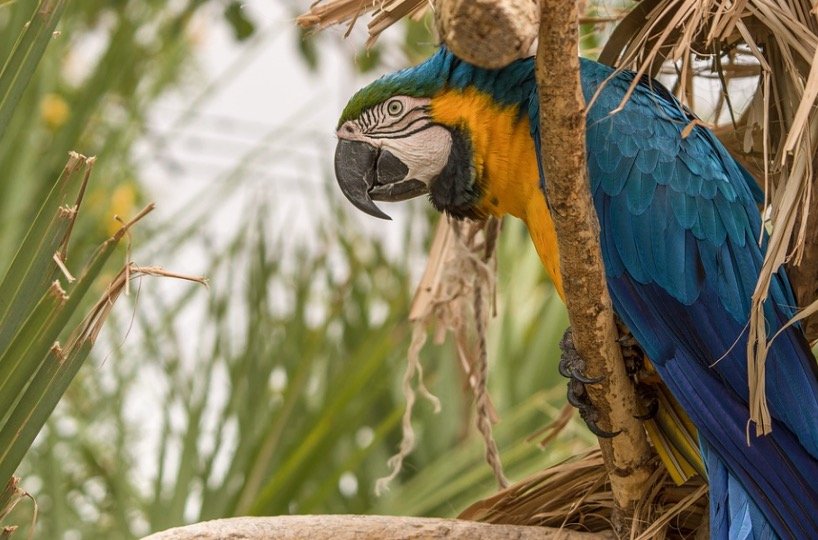 Because of the warm and humid atmosphere, these birds flourish in tropical places. They do not, however, require this habitat to survive, which is why so many of the birds may be found in warm areas across the world.

Apart from pet stores, there are species that may be found in Australia, South America, and Central America in their native habitats. Regardless of where they live with their owners, most wild parrots will make a nest among broad-leafed deciduous trees and vivid tropical plants.

The actual number of parrots on the planet is unknown at this time. However, there are over 350 species of parrots found around the world, including the macaw, the grey parrot, and the monk parakeet. Since the International Union for the Conservation of Nature proclaimed parrots “not extinct,” no large-scale conservation measures have been undertaken.

However, parrot trade and habitat degradation have caused nearly half of these species to become endangered in the previous decade. Half of them are classified as “critically endangered.”

Some species, such as the citron-crested cockatoo, have been traded on the black market so regularly that local governments have implemented restrictions.

While certain regulations prohibit them from being traded or hunted, parrots are nonetheless often maintained in captivity as pets or zoo attractions owing to the Convention on International Trade in Endangered Species. 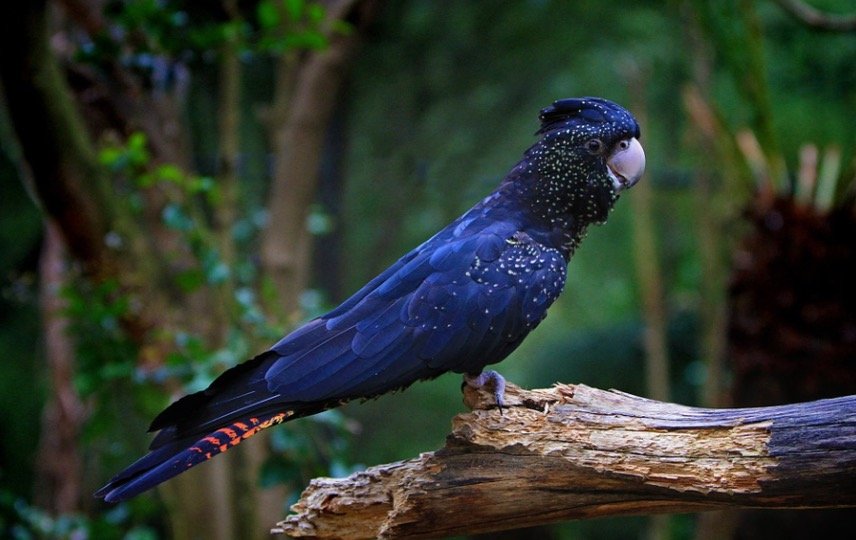 It’s nearly impossible to locate a zoo that doesn’t feature at least one type of parrot bird on its grounds. They are housed in cages in captivity and given raw or steamed fruits and vegetables, whole grains, pseudo-grains, and oats. The San Diego Zoo, the Houston Zoo, and the Cincinnati Zoo and Botanical Garden are just a few of the zoos in the United States that are known for their parrot displays.

• Parrots may be found in the wild in tropical environments such as the rainforest.

• Parrot is a broad term that refers to a variety of birds, 372 species to be exact. Grey parrots, macaws, and monk parakeets, for example, are all members of the same bird family.

• Parrots are colourful birds that are easy to detect in their native habitat because of their vibrant colours. “The 10 Most Beautiful Parrots in the World” is a collection of the world’s most beautiful parrots.

• The brain development of this bird, which is one of the most clever and witty of the bird species, is surprisingly comparable to that of humans.

• With their sophisticated vocal chords, these birds are capable of reproducing a wide range of sounds, including human speech.

• The kakapo, a flightless parrot from New Zealand that may weigh up to 9 pounds, is the world’s heaviest parrot. 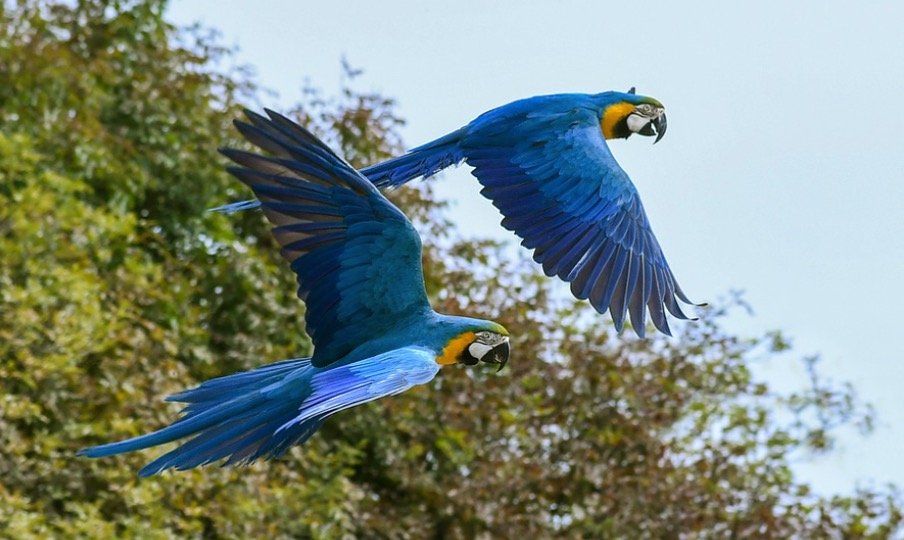 Psittaciformes is the scientific term for parrots, which belong to the Animalia kingdom. Chordata is the phylum to which they belong. Their taxonomy also includes their class, which is Aves, and their clade, Psittacopasserae.

Psittaciformes is the name of the order, which is the same as its scientific name. The word “parrot” is said to have originated in the early 16th century and is derived from the French word “perrot.” Perrot is a nickname for Peter, which derives from the Greek word perrot, which means “stone” or “rock.” 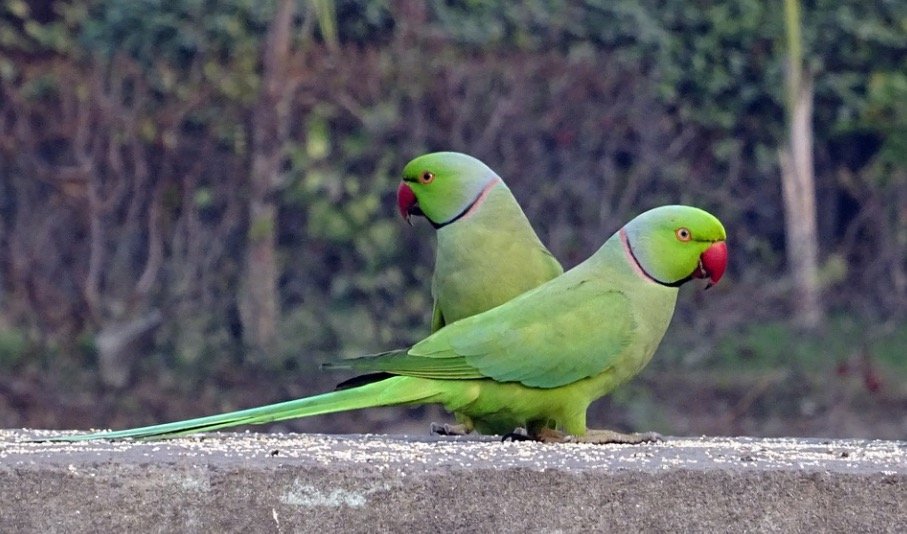 The vividly colourful feathers of these birds are well-known, but the colouring of each species differs. The most common image of a parrot is one that is brilliant green with a gorgeous, curved bill that has amazing strength.

These birds will perch or even move about erect with their clawed feet if they are standing upright. Although not all parrots are the same colour as the macaw, which is black, red, and yellow, it is one of the few that does not exhibit sexual dimorphism.

Males and females have a wide range of colours, making it easy to distinguish between the two genders. These birds are friendly in nature, which has earned them a place in people’s hearts as beloved pets for ages.

These creatures express empathy at a level not seen in other types of birds, which may be more than a first-time pet owner bargained for.

However, the humans with whom they live can influence their attitude and conduct. Don’t be deceived by the bird’s sweetness; certain species are quite deadly and violent when disturbed.

The Senegal parrot, for example, is a small bird, but if it feels threatened, it may bite down hard with its beak, causing significant pain. Most of the time, parrots will only attack if they are in danger, relying on their innate “fight or flight” instinct to avoid injury.

When these birds in confinement – whether in a zoo or a house – feel irritated or afraid, they may hurl food around and try to tear up their surroundings. They’re also quite talkative at all hours of the day and night, filling their houses with a cacophony of loud noises.

The majority of parrots may be seen hunting for food in their native habitat, but they will also groom themselves. 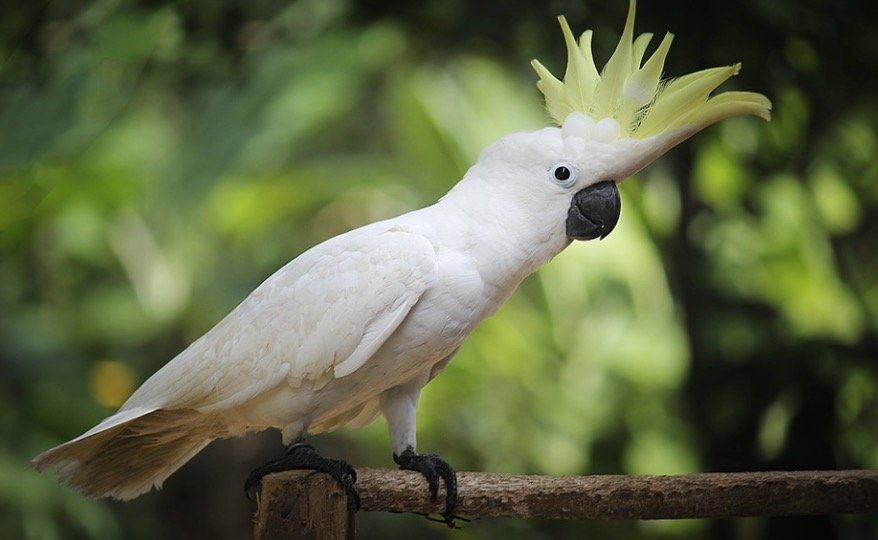 Although their friendly demeanour has won them a place of love and respect in the hearts of many pet owners, these birds are also intelligent and funny. If maintained as a pet, they tend to create a close, friendly, and sociable attachment.

Most parrots want to be around social activities in the house, which allows them to develop trust and maintain long-term relationships. They have a relatively short attention span due to their strong enthusiasm.

They do, however, make use of the bird’s empathic nature to present a theatrical display of their feelings. The parrot may begin to copy familiar words and noises as it spends more time with its human owner.

These birds are omnivorous and eat a wide variety of foods. Raw or steamed veggies, as well as healthy grains like rice, oats, quinoa, barley, and buckwheat, will keep the parrot healthy as a pet.

If available, organic feed is better for the bird’s health since it prevents them from consuming harmful chemicals that might cause health problems. Nuts and seeds are a tasty reward for them as pets or while they are flying freely over tropical areas.

Parrots, like other living things, including birds, play a crucial role in the natural food chain. In the wild, they serve as both prey and predator, falling prey to larger raptorial birds. Humans are the primary threat to these birds.

Deforestation, industrialization, and other human activities deplete their natural habitat. Without a place to call home in the wild, agricultural actions that affect their habitat diminish the places where parrots are safe from harm.

Aside from habitat loss, human activities can weaken and harm the woods in which parrots, dwell, making it difficult for them to find a steady source of food. These birds, despite their speed and agility, are preyed upon by a number of predators.

Hawks, eagles, forest eagles, falcons, and accipiter hawks are all natural predators of the parrot. Although parrots are not considered delicacies by humans, the damage they cause to their environment poses a far larger concern.

Fruits, nuts, seeds, flowers, and buds make up the majority of the bird’s diet. Some animals rely only on nectar to survive. The only creatures that have to worry about their predatory nature are insects, which will eat both raw and cooked veggies.

If a parrot is unsuccessful in his search for insects, he may turn to snails, mice, or snakes. Surprisingly, not every parrot will eat omnivorous foods.

The majority of animals are monogamous, which means they stay with the same spouse for the rest of their lives. When these birds decide on a mating mate, they will stick with them even throughout the non-breeding seasons.

Parrots tend to mate in accordance with the changing seasons of their surroundings, preferring to do so during the warmer months of the year. Because of the increased temperatures and plenty of food supplies for their progeny during these months, the reproductive process usually begins in the spring.

Throughout these months, the parrots’ bodies naturally begin to release sex hormones, which attract them to one another for mating. Like several other birds, parrots lay eggs rather than give birth to live young. Parrots typically lay two to eight eggs at a time.

The time it takes for a parrot’s egg to hatch is normally between 18 and 30 days, yet the parents will stay on top of the eggs until they hatch. Like many other bird species, its young are simply referred to as “chicks.” Small parrots can live for 15 to 20 years, whereas bigger species can live for up to 80. Parrots have also been known to live to be 100 years old.