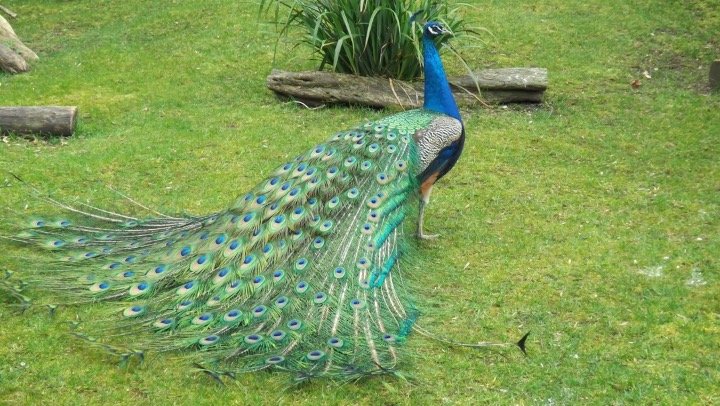 A peacock is an omnivorous creature belonging to the Animalia family, phylum Chordata, class Aves, order Galliformes, and family Phasianidae.

Its genus is Pavo. Its length is up to 34 to 42 inches, it weighs up to 6 to 13.2 pounds, and it has a wingspan of up to 3 to 10 feet, with a lifetime of up to 12 to 20 years. A peacock is a bird that feeds on insects, grains, and seeds. Their colourful feathers are their most distinctive characteristics.

Peacocks are preyed upon by dogs, raccoons, wild cats, and tigers. Physical features include blue, grey, green, and blue skin colorations, and feathers on the skin, with a top speed of 10 mph. 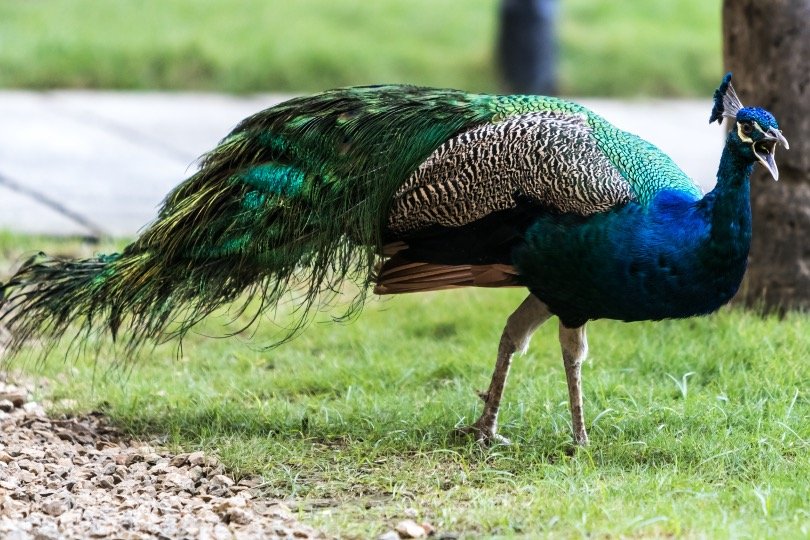 Peacocks are among the world’s largest flying birds. The enormous, colourful tail feather plumage of peacocks is well-known. Despite being the most well-known feature of peafowls, only males have these magnificent tail colorings.

Some species have smaller plumage than the blue peacock or Indian peacock, which is what most individuals understand the essence of a peacock to be. These birds are Asian in origin. The blue peacock, in particular, hails from India. Because of this, they are known as Indian peacocks or peafowl.

They may also be found in the wild in Africa, where they are related to the lesser-known Congo peacock. Peafowl may also be found in various parts of Australia. They enjoy a warm environment for their habitat, so the desert and savannah are the best areas to look for them.

Summer is the best time to study peafowl because it is breeding season and they are more likely to be active. The morning and night are the busiest times for these birds. They also prefer to reside in wooded areas.

In addition, these birds may be seen in zoos all around the world. Indian peacocks make up the majority of captive peacocks in zoos. There are also many people that keep peacocks as pets or keep them on their farms. 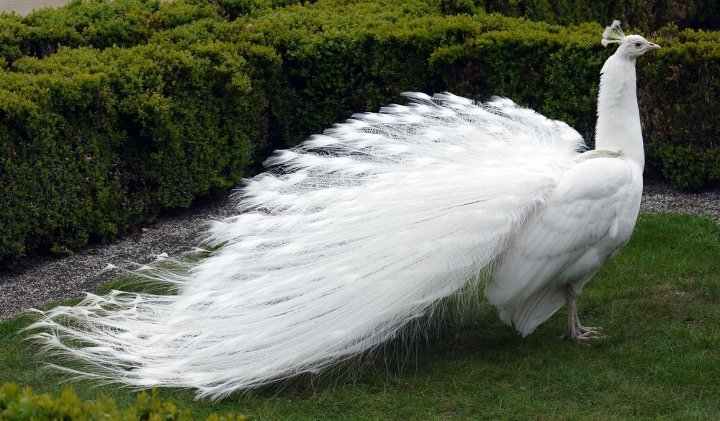 Peahens make their nests in tiny holes cushioned with grass on the ground. To keep the eggs secure from predators, they normally build their nests in regions protected by bushes, shrubs, or other vegetation.

The status of the Indian peafowl is the least concerning, indicating that the population is thriving in the wild and is not endangered at this moment. There are about 100,000 of these birds around the globe right now.

There are fewer than 30,000 green peacocks left in the wild, making them an endangered species. The Congo peafowl is endangered, having a population of less than 10,000 individuals.

That indicates the number is dwindling, owing primarily to habitat loss, and they are in danger of being extinct. The right name for what most people refer to as a peacock is peafowl. This applies to both men and women.

Only the male is referred to as a peacock. Peahens are the females of the species. Male and female peacocks and peahens may easily be distinguished by their physical appearance. Peahens have a more simple appearance than their male counterparts. 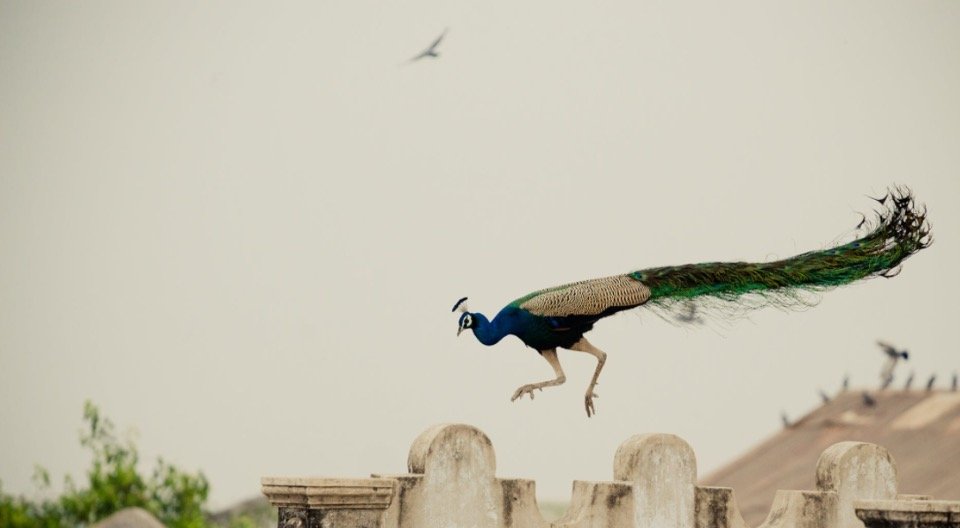 • Peacocks use their distinctive plumage to both attract mates and deter predators by making them look larger.

• Ocelli are the eye-like markings on the tail feathers.

• The Indian Wildlife Act of 1972 provides protection for peafowl.

• A gathering of these birds is referred to as a muster, pride, or ostentation.

• Peacocks are one of the few blue creatures on the planet since blue is the rarest hue in nature.

Peafowl come in three varieties, each with its own colour scheme. They are members of the Galliformes order and belong to the Aves class. The scientific name for the Indian peacock, Pavo cristatus, is Pavo cristatus.

It is the most numerous and well-known species today. Pavo muticus is the scientific name for green peafowl. The Pavo genus has two subspecies: the Indian peacock and the Green peacock.

The Congo peafowl, on the other hand, is a member of the Afropavo genus and bears the scientific name Afropavo congesnis. Pheasants are the closest relatives of peafowl. Both species are ground-birds and belong to the Phasianidae family. 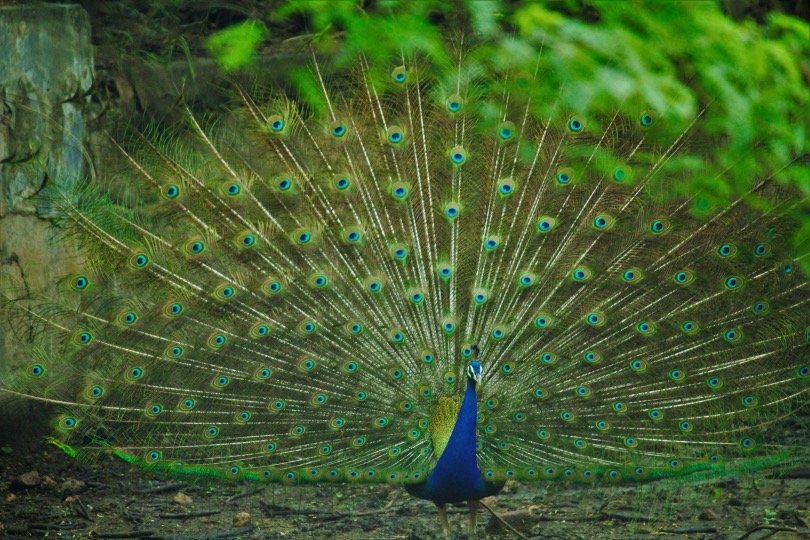 The size and appearance of the bird vary depending on the species. These birds can grow to be two to ten feet long and weigh anywhere from eight and a half to thirteen pounds. Their height varies from just under three feet to just over four feet.

The Indian peacock has big tail feathers covered in complex dots that depict eyes and are a stunning, brilliant blue hue. Ocelli are the names of these spots. The Green Peacock, as its name indicates, is generally green in colour and possesses plumage that resembles that of the Indian peacock when its tail feathers are extended.

The Congo peacock has a distinct look from the other two subspecies. A Congo peacock’s hues range from brown to grey, and the train, or tail feathers, is much smaller than the others.

Female peafowl, known as peahens, are smaller than males and have more neutral colouring than males. Peahens also lack the tail feather plumes that males possess. Some peafowl have entirely white feathers.

Albino peacocks are the popular name for these peacocks. A real albino peafowl, on the other hand, is uncommon. Leucism is a condition that differs substantially from albinism in these birds. The majority of white peacocks are not albino.

Peafowls, like many other animals, communicate by sound. To warn of a close predator, a shrieking sound is used. To attract peahens, peacocks employ a song-like sound as a mating call.

Peafowl may produce extraordinarily loud noises. Peacocks also fan out their train, or tail feathers, in order to appear larger to predators. 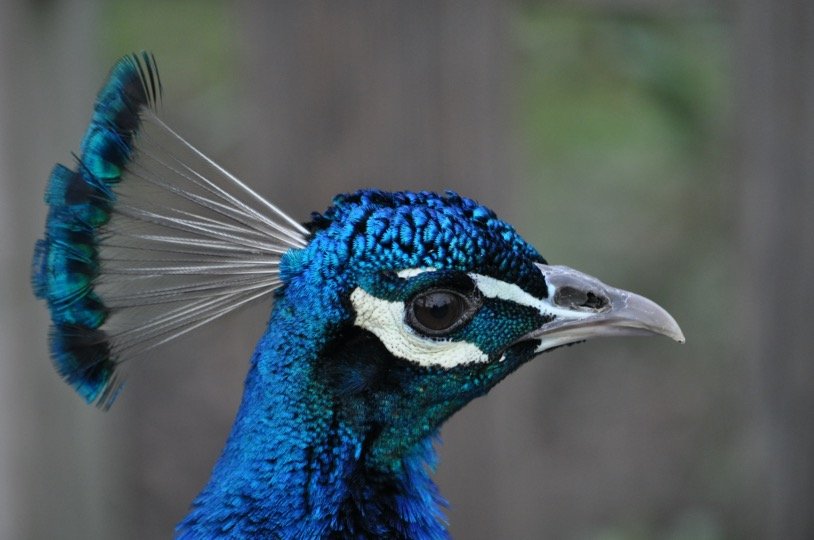 Peafowl consume both plants and animals, making them omnivores. Grass, roots, flowers, fruits, and seeds are among the plants and plant debris consumed by these birds. They eat insects, worms, and amphibians like snakes and frogs, among other things.

Peafowls face a variety of natural predators in the wild. Wild cats like tigers and leopards, as well as wild canines like the dhole and even medium-sized mammals like raccoons, feed on peafowl.

Unless the birds flee, predators will pursue and attack them. When they can, they fly into trees to avoid danger. Humans are also a hazard to these creatures. Human-caused poaching and habitat degradation are two of the most serious issues facing these species.

Poachers kill peacocks unlawfully in order to collect and sell their colourful tail feathers, flesh, and eggs. The IUCN (International Union for Conservation of Nature) considers the Indian peafowl to be of least concern.

The green peafowl is on the verge of extinction. The Congo peafowl is classified as endangered. Protection legislation, wildlife sanctuaries, captive breeding, and ongoing research and education are among the conservation initiatives for these birds. Human action can aid in the preservation of these intriguing creatures.

During the breeding season, peacocks are known to mate with a large number of peahens. They mate by aligning their sexual organs, the cloacas. When the peahen lays her eggs, she incubates them in the same way that a chicken would.

Incubation might last anywhere from 27 to 30 days. Peachick refers to a young peafowl. The mother is the only caregiver for each child. Peachicks can walk as soon as they hatch, sometimes just days or hours later, and can fly short distances by the time they are a few weeks old.

When they reach the age of three, they begin to moult, and their feathers regrow swiftly. Peafowl have a lifetime of 12 to 20 years in the wild, but have been known to survive up to ten years longer in captivity.