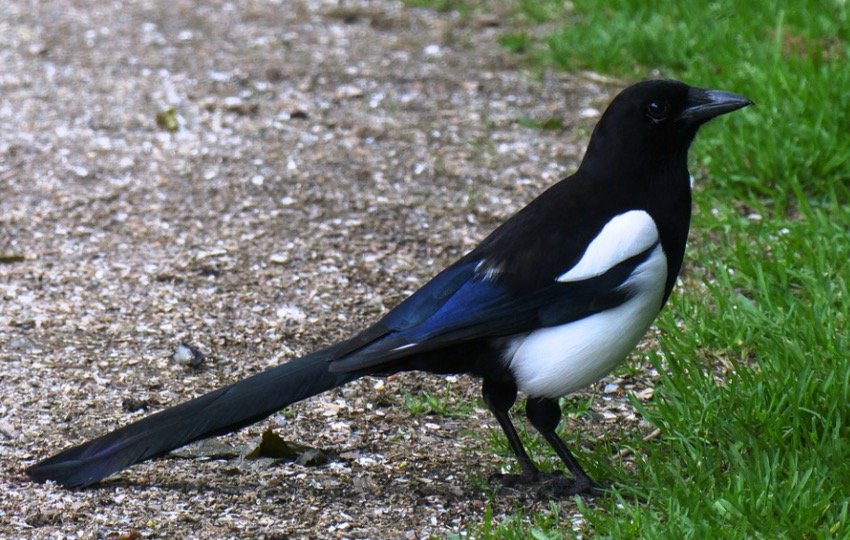 A magpie (Pica pica) is an omnivorous creature belonging to the Animalia family, phylum Chordata, class Aves, order Passeriformes, and family Corvidae. Its genus is Pica. Its length is up to 16 to 18 inches, it weighs up to 7 to 9 ounces, and it has a wingspan of up to 20 to 24 inches, with a lifetime of up to 8 to 15 years.

A magpie is a bird that feeds on fruits, seeds, nuts, and insects. The black and white markings and the long wedge-shaped tail are the most distinctive characteristics. Magpies are preyed upon by foxes, cats, and coyotes.

Physical features include black and white skin colorations and feathers on the skin, with a top speed of 20 mph.

Magpies have the ability to recognise themselves in a mirror. Magpies may be found in a wide range of environments, including grasslands, meadows, and the borders of deep woods. These birds, which are omnivores, eat insects, berries, nuts, and even small rodents.

They frequently construct enormous nests with two openings. The chirps, squeals, warbles, whistles, and other noises that magpies make are well-known. They reside in groups called flocks or murders. 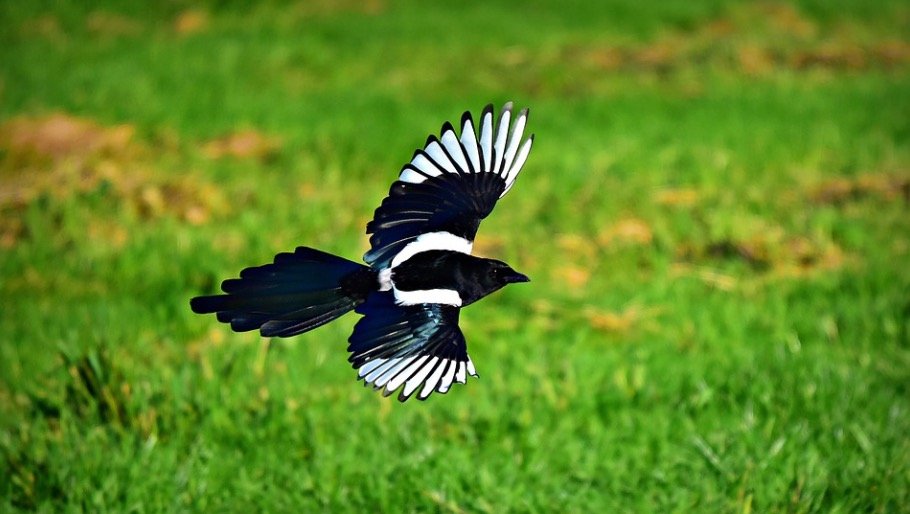 Magpies may be found in a variety of locations across the world, including North America, portions of Europe, Africa, and Asia, as well as the islands of Southeast Asia. To live, they require a moderate climate.

Magpies may be found in grasslands, meadows, and woodland margins. These birds forage on open areas of land, yet they reside near deep woods so they may readily flee predators. Their nesting sites are frequently located along rivers and streams, among bushes or trees.

This allows the birds to get water without having to leave their young. When the winter weather season arrives, some magpies in northern places migrate south. When the weather becomes cold, a black-billed magpie residing in Colorado’s Rocky Mountains may migrate to a lower elevation.

They do not, however, travel far from their year-round habitat. These birds, for the most part, do not migrate. According to estimates, there are around 5 million black-billed magpies in North America.

Their conservation status is listed as of least concern. Though these birds suffer significant risks, their numbers are stable. Some farmers, for example, consider them pests because they take seed and food from barnyards.

A farmer may use poison to exterminate magpies that have taken up residence on his or her property. A few magpies are classified as endangered in other regions of the world. The population of the Asir magpie, for example, is declining owing to habitat degradation.

In Africa, where they reside, the juniper woods are being removed. Furthermore, the Javan Green Magpie is classified as Critically Endangered. The population of this magpie in Southeast Asia is declining due to human trapping for the purpose of selling them as pets. 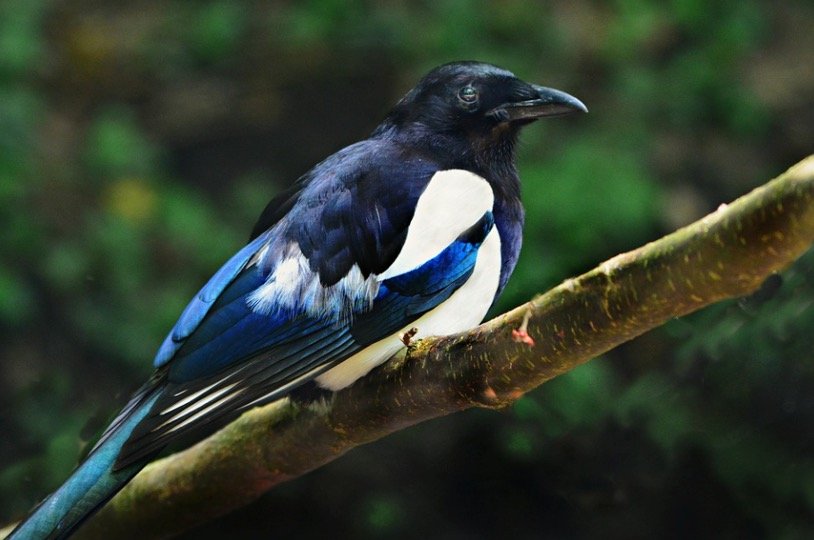 • At the Memphis Zoo, you may learn more about the Azure-Winged Magpie.

• The Yellow-Billed Magpie may be seen in the Los Angeles Zoo and Botanical Gardens.

• An Oriental magpie is on exhibit at the Minnesota Zoo.

• The tail of a magpie is as long as its body.

• Ticks seen on deer, elk, and other big animals are sometimes eaten by these birds.

• Magpies are related to jays and crows and belong to the same family.

• When they take flight, they stand out thanks to a spray of white feathers on their wings.

• This bird produces green or brown eggs in a clutch of 6 to 9. 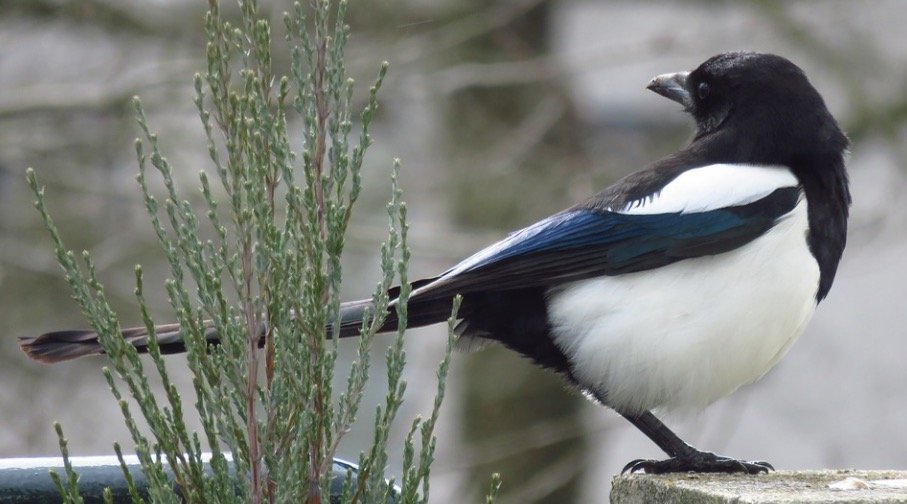 Pica hudsonia is the etymology of the black-billed magpie. Pica is a mediaeval Latin word. It was given to a magpie since the bird is known for consuming just about anything.

The American magpie, Maggie, and Flute-bird are some of the other common names for this bird. It is a member of the Corvidae family and belongs to the Aves class. 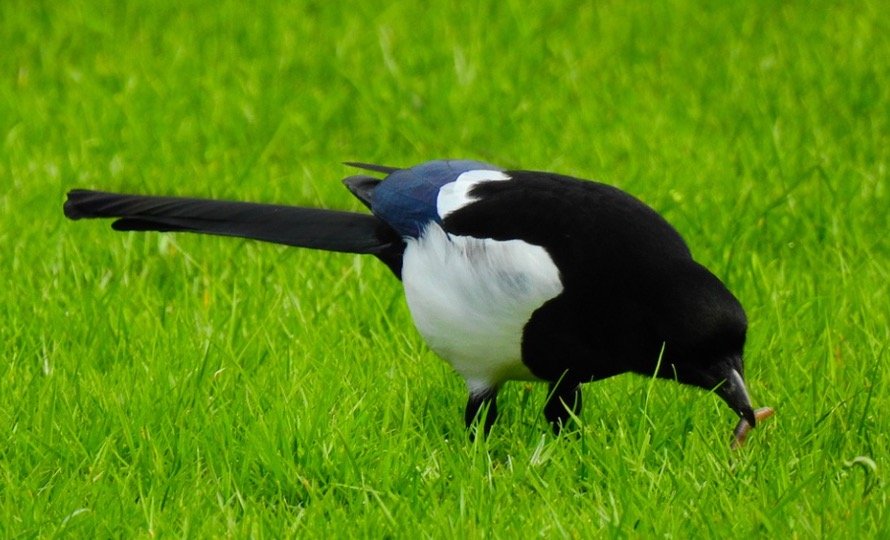 The black and white feathers of the Australian magpie are also present. It does, however, have white feathers going up the back of its neck, unlike the other two. It also has a white and black bill.

Magpies have small black eyes that are constantly scanning their surroundings. They have two black feet with three narrow forward-pointing toes and one backward-pointing toe.

When these birds walk, they take long, languid steps that make them appear to be strutting rather than strolling. Another trait that has earned them the image of being aggressive birds is this.

Magpie birds often reach a length of 19 inches. You can get the length of a 19-inch magpie by lining up two-and-a-half pencils end to end. They can, however, reach lengths of up to 2 feet.

Magpies are about 6 ounces in weight, which is somewhat less than a typical pet store hamster. The biggest species of magpie is the Eurasian magpie, which may weigh up to 9.6 ounces. 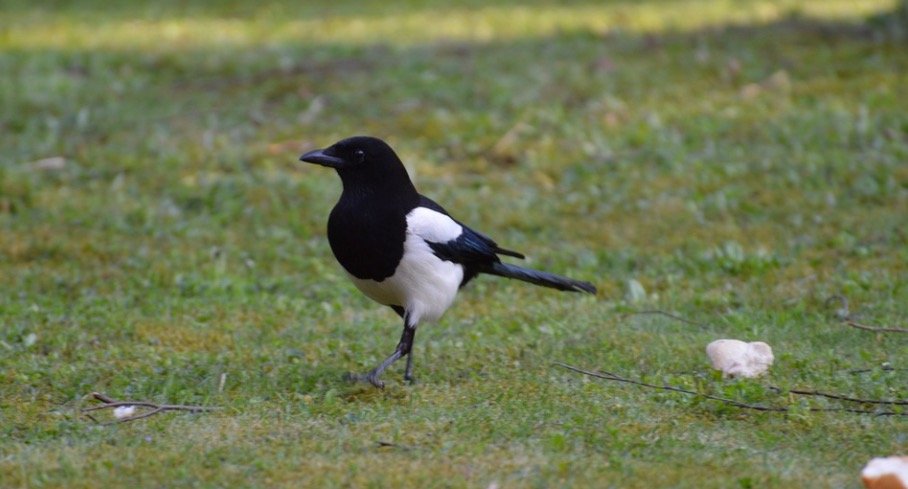 A parliament, tribe, or mischief is the name given to a group of magpies. Magpie swarms are also known as killings. Have you ever heard of a crow massacre?

Crows and magpies belong to the same family. As a result, both sorts of birds may commit murders or flocks. A flock is often made up of a mated couple of magpies and their young.

As a result, a typical magpie flock would consist of around eight birds. Magpie flocks are greater in cooler climates. This enables them to remain warm by roosting together. Magpies that live in flocks are protected from predators such as hawks and owls.

A flock of magpies working together to scare a predator away from a nesting spot is not unusual. Magpies often seek refuge in deep woodlands and woods to avoid predators.

These are fearless birds that will land on deer, elk, and other animals to feed on ticks on their fur. They’re also common sightings on farms, where they take grain, seed, and other food scraps from inside the barn or from the ground. As a result, they are regarded as pests in many agricultural regions. 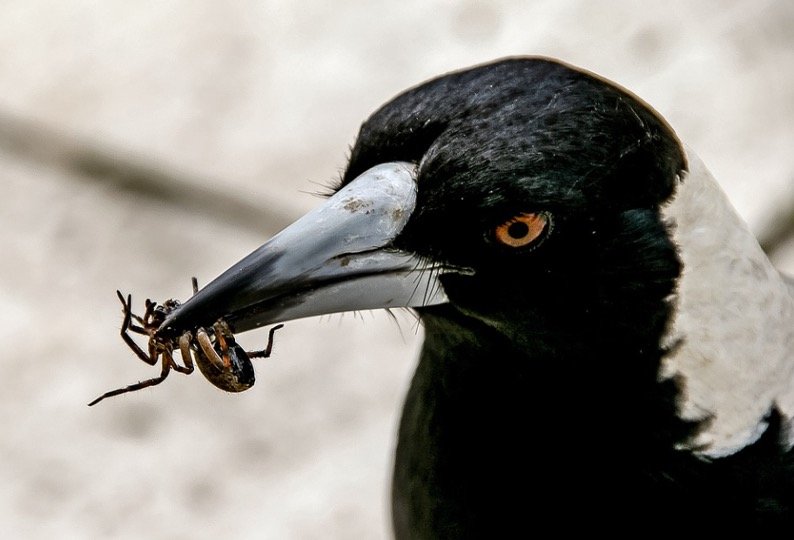 Magpies are omnivores, meaning they consume both plants and animals. They devour whichever food source is most abundant at the moment in the ecosystem. The menu includes grasshoppers, berries, nuts, beetles, caterpillars, and rodents.

These birds have been known to steal eggs and even chicks from other birds’ nests. As a result, magpies are frequently referred to as nest predators.

Magpies have also been observed to accompany coyotes or foxes while they are hunting. This is so that the birds may grab part of the flesh of the predator-killed animal.

Domestic cats, dogs, foxes, and owls are among the predators of magpies. Raccoons, hawks, weasels, and mink have been known to steal eggs and chicks from their nests. Magpies are courageous birds who aren’t hesitant to spend time in close proximity to humans and residential areas.

They may try to eat bird feeders or take food from garbage cans. They are vulnerable to dogs and cats in the neighbourhood as a result of their activities. 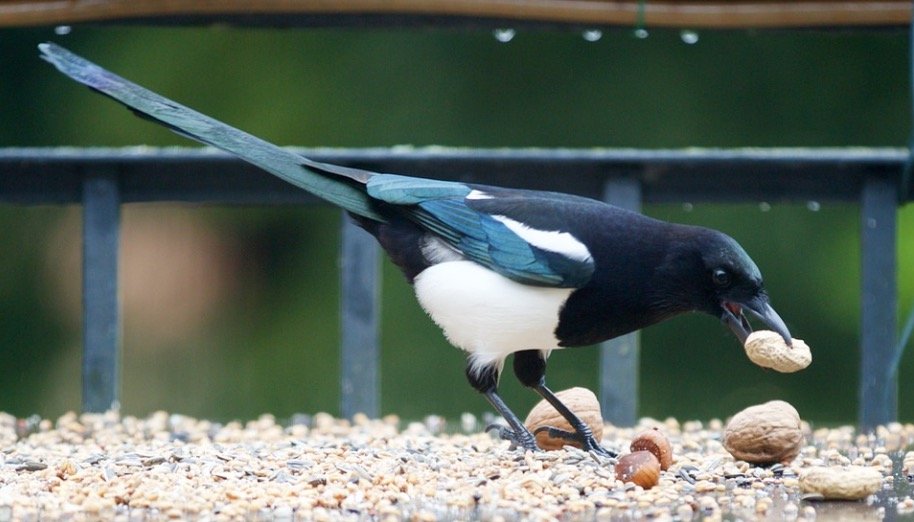 Black-billed magpies have a mating season that lasts from March to July. Male magpies display their brilliant white feathers on their wings to attract females’ attention. When a male and female team up to procreate, they stay together until one of them dies.

If one of the magpies dies, the other may find a new mate, but this isn’t certain. A male and female magpie work together to create a nest. Sticks, grass, twine, hair, vines, and mud are used to construct an extraordinarily big nest by these birds.

The typical nest measures 20 inches in width and 30 inches in height. A magpie’s nest, interestingly, features a canopy, or roof, made of sticks, as well as two openings.

These birds have been known to make their nests as high as 30 feet in tree branches. A clutch of 6 to 9 eggs is laid by a female magpie.

The eggs might take anywhere from 16 to 21 days to hatch. Each egg is around one inch in length. The male magpie searches for food to feed his partner as the female sits on the eggs.

“Chick” is the name given to a young magpie. A fledgling is a bird that has left the nest and is exploring its surroundings. These birds are born without feathers and blind.

The chicks gain a coating of downy feathers in their first week of life, and their eyes open around day 10. Magpies, both male and female, alternate delivering tiny insects and other food to their babies. When the baby magpies are around 25 days old, they depart from the nest.

For around two years, young magpies stay with their parents in the flock. They are then moved out of the flock and into a new group. A black-billed magpie’s typical lifetime in the wild is 3.5 years for a male and 2 years for a female.

A magpie kept in captivity, on the other hand, can live to be 20 years old. An Eurasian magpie who lived to be 21 years and 8 months old is the world’s oldest magpie.

Magpies, like other birds, can suffer from respiratory problems as they get older. They can also get parasites such as ectoparasites and lice, which can reduce their lives.