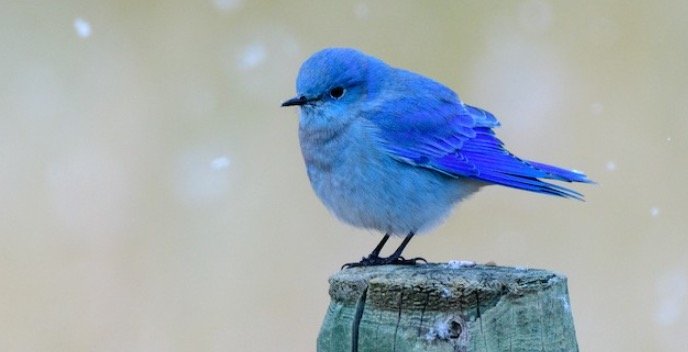 A mountain bluebird (Sialia currucoides) is an omnivorous creature belonging to the Animalia family, phylum Chordata, class Aves, order Passeriformes, and family Turdidae. Its genus is Sialia. Its height is up to 6 to 7 inches, it weighs up to 0.8 to 1.1 ounces, and it has a wingspan of up to 11 to 14 inches, with a lifetime of up to 6 to 10 years.

A mountain bluebird is a bird that feeds on seeds, fruits, insects, and spiders. Its bright blue plumage is its most distinctive characteristic.

Mountain bluebirds are preyed upon by hawks, falcons, cats, raccoons, snakes, weasels, and rodents. Physical features include brown, grey, blue, and white skin colorations, and feathers on the skin, with a top speed of 20 mph.

Mountain bluebirds can be found in the beautiful environments of western North America. This species, which has an exquisite brilliant blue plumage and makes a loud warbling song, may be spotted perching on fence posts, wires, and trees.

These are one of the most iconic and widely distributed songbirds in the Americas. Mountain bluebirds may be found in western Canada, the United States, and Mexico, mainly at elevations above 7,000 feet in grasslands, deserts, mountains, and farmlands.

Mountain bluebirds like to nest in the hollow chambers of conifers and aspens. If these aren’t accessible, they may instead go for cliffs or banks. Because these birds are unable to make hollows and holes on their own, they must rely on those formed by both natural and man-made sources. 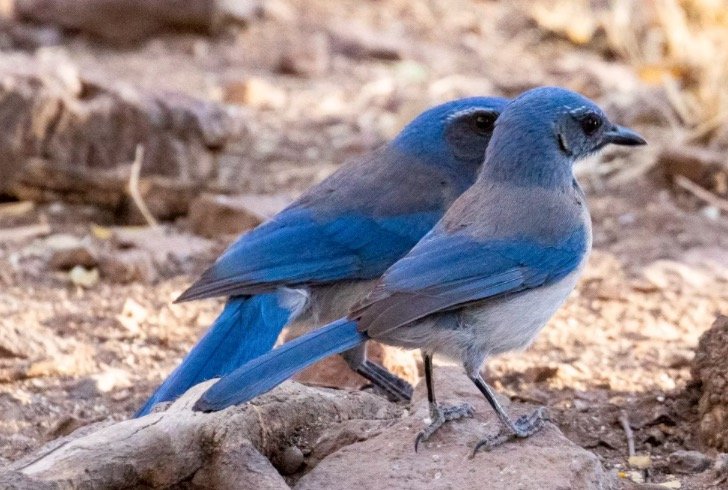 These birds are now classified as species of least concern by the IUCN Red List, which is the world’s premier conservation database. As a result, no particular conservation efforts are required. According to estimates, there are around six million adult individuals left in the wild. The numbers appear to be growing again after a period of relative decline.

• The mountain bluebird is Idaho and Nevada’s official bird. The feathers are considered holy symbols by certain Native Americans.

• Because of its unusually vivid blue plumage, this species is commonly referred to as “the bluest of the bluebirds.” The Arctic bluebird and the ultramarine bluebird are two more frequent names for this species.

• The mountain bluebird may breed with the closely related eastern and western bluebirds to generate hybrid offspring.

• The mountain bluebird is a member of the Turdidae family, which includes all known thrushes. 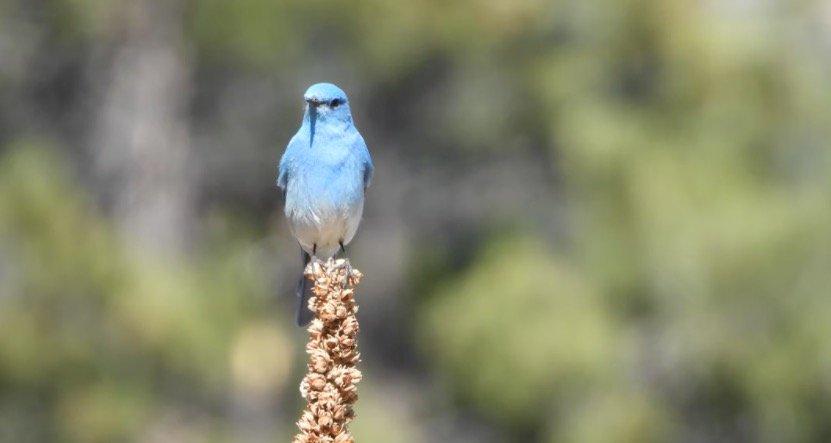 The mountain bluebird’s scientific term is Sialia currucoides, and it belongs to the Turdidae family. Sialia is a Latin word that means “bird” or “bird species.” Currucoides is a Latin name that approximately translates to a bird that looks like a warbler, notably the lesser whitethroat.

The mountain bluebird is a tiny songbird with a rounded head and stomach, a narrow beak, and sinewy black legs. The physical characteristics of the sexes can be easily distinguished.The top feathers of males are vivid blue, decreasing to a pure white tint near the lower stomach.

Females come in a variety of colours, including grey, brown, and even light orange. Most birds are around the same size as certain drink glasses, measuring between 6 and 7 inches in length.

In California, Nevada, Utah, Colorado, New Mexico, and Arizona, they may be seen all year. They appear to move in huge flocks of up to 50 individuals, despite not being a gregarious species, but many other aspects of their migratory behaviour remain unknown.

These bluebirds have a collection of sounds and songs that they use to relay vital information, including their feelings of alarm, all-clear signals, and territory borders.

Only the males, like many other songbirds, are thought to be capable of communicating through real song, which is thought to have something to do with mating and breeding behaviour. Because certain populations appear to sing more regularly than others, song output may vary by location.

During the mating season, mountain bluebirds are also highly active in establishing and defending a certain area. Humans or other dangers that go too close to their nests appear to dive-bomb and snap their bills.

They do not tolerate other individuals of the same species during the mating season, save for their spouse. 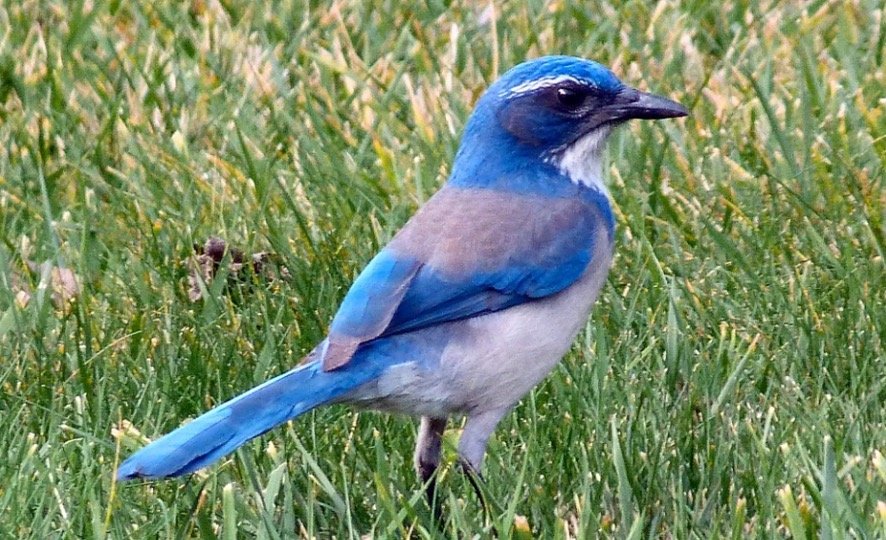 The mountain bluebird eats a variety of foods depending on what is available at the time of year. They will sit on tall perches to locate and then dive upon creatures when foraging for meat, or they may hover just above the ground and attack.

During the winter, the mountain bluebird prefers to eat seeds and fruits, but the majority of its diet consists of tiny invertebrates, including grasshoppers, caterpillars, crickets, spiders, cicadas, and other insects. They help to keep insect populations in check, which is beneficial to the environment. 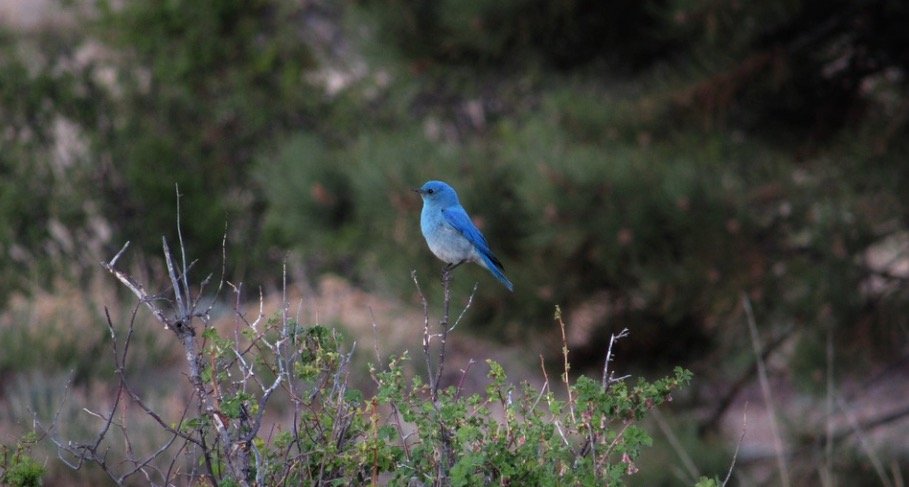 Besides predators, these birds do not suffer any serious challenges in the wild at the moment. The majority of its range is sparsely populated, and it is even protected by humans. They do, however, occasionally face stiff competition for breeding locations from other birds.

The fact that nesting hollows aren’t always accessible adds to the problem. They can also become trapped by mistake within PVC pipes and other man-made constructions.

These birds form short-term monogamous partnerships, lasting one or more mating episodes when the breeding season approaches between April and August. If a clutch is produced early in the mating season, the female is more likely to mate with her partner for a second brood.

This species, on the other hand, is a little promiscuous and has no qualms about mating with other birds other than its companion. After the couple has mated, the female will lay one egg every day until there are four to eight eggs in the nest.

The mother will incubate the eggs until they hatch, which will take between 12 and 16 days, while the father supplies her with food and care. In most cases, the offspring will hatch in the sequence in which they were deposited.

Both parents have a crucial part in raising the children because they are born utterly helpless and defenceless. The chicks will have full flight feathers and a high degree of freedom after around three weeks.

However, the initial brood will occasionally return to the nest to assist their parents in raising the next brood. Young mountain bluebirds have a high mortality rate, but if they make it through the juvenile stage, they can expect to live for six to ten years.