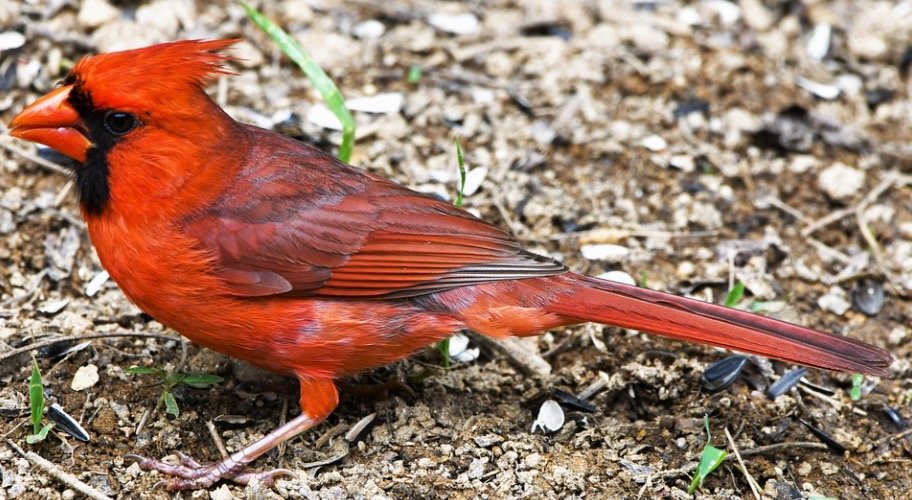 A northern cardinal (Cardinalis cardinalis) is an omnivorous creature belonging to the Animalia family, phylum Chordata, class Aves, order Passeriformes, and family Cardinalidae. Its genus is Cardinalis. Its length is up to 8.3 to 9.3 inches, it weighs up to 1.58 ounces, and it has a wingspan of up to 9.8 to 12.2 inches, with a lifetime of up to 3 years.

A northern cardinal is a bird that feeds on small insects and worms. Raised crests are the most distinctive characteristics. Northern cardinals are preyed upon by birds of prey, snakes, and cats. Physical features include brown, red, and olive skin colorations, and feathers on the skin, with a top speed of 37 mph.

Males have a vivid red tint that is referred to as “cardinal red.” The northern cardinal, also known as the cardinal, red cardinal, common cardinal, or redbird, is a medium-sized songbird.

It may be found in both North and South America. It was first brought to Bermuda in 1700, and then to southern Arizona, southern California, and Hawaii.

The bird is one of several species of cardinal, and it gets its name from its cardinal-red hue and northern habitat. Wetlands, shrublands, gardens, and forests are the native habitats of the northern cardinal.

They may be found in Maine’s southern half, Minnesota, the Texas-Mexico border, southern Canada, Mexico, northern Guatemala, northern Belize, Bermuda, Hawaii, and southern California and Arizona.

It builds its nest among trees and bushes. The breeding season, which runs from January to September, is when people are most likely to see the bird. 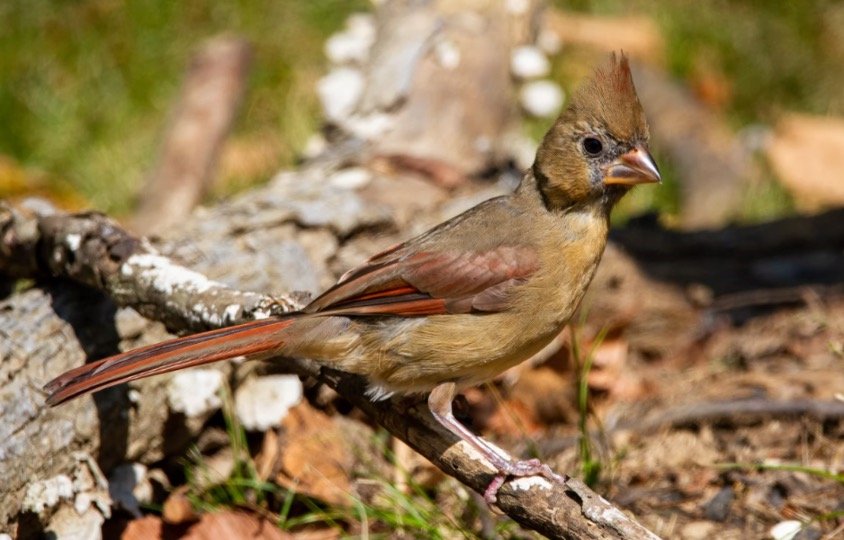 The redbird prefers thick bushes and low trees that are 3.3–9.8 feet off the ground as their habitat. The female is primarily responsible for building the nest, while the male provides nesting material.

The finished nest measures 2-3 inches in height, 4 inches across, and has an interior diameter of around 3 inches, and it takes three to nine days to build. The nest is generally only used once by the couple.

According to known data about the bird, the northern cardinal is neither endangered nor threatened, but it can face a variety of external risks. Its population is constant, according to the IUCN Red List, and it is classified as least concern. 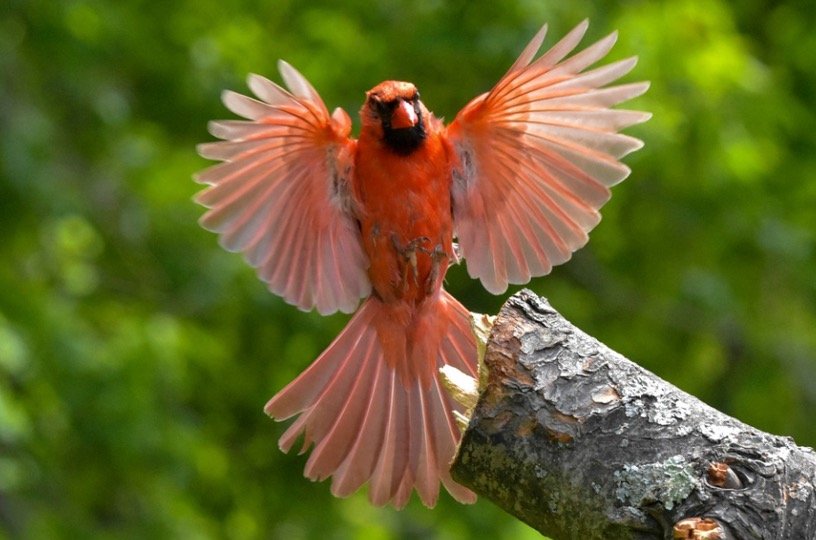 • A cardinal is referred to as a “redbird,” although the term “redbird” can apply to any red-colored bird.

• Both the popular and scientific names “cardinal” allude to the red hats and robes used by Roman Catholic cardinals, commonly known as “cardinal red.”

• Due to hormonal changes, male and female sounds are sexually dimorphic.

• To separate itself from other species, it is called a northern cardinal.

Cardinalidae, often known as cardinal-grosbeaks or cardinal-buntings, is made up of 14 genera. Cardinalis is a genus that contains three species. Cardinalis cardinalis has 19 subspecies, with C. cardinalis being the type species. 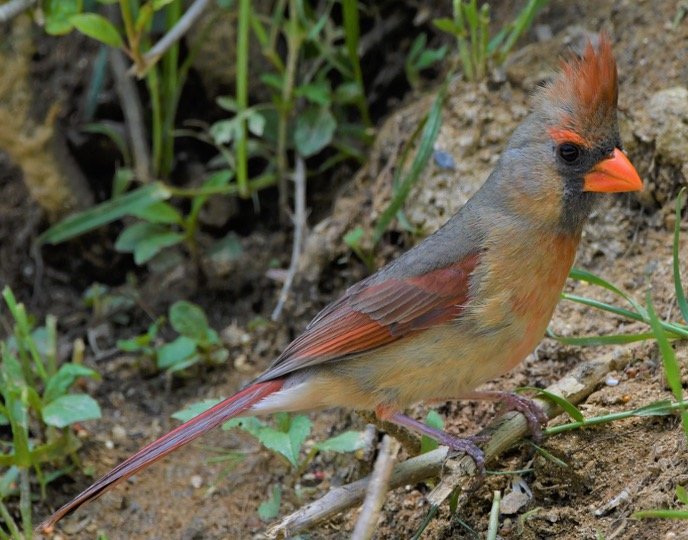 The northern cardinal is a medium-sized songbird with a high crest and a brightly coloured coral beak. It has a body length of 8.3–9.3 inches and a wingspan of 9.8-12.2 inches. Males have a cardinal red hue, while females are olive-brown with red accents. Males are considerably longer and heavier than females.

Adults range in weight from 1.19 to 2.29 ounces, with an average of 1.58 ounces. They hide their nests in dense trees and bushes because of their striking colours, whether it’s the red body of the males or the coral hue of both of their beaks.

They do not relocate, and their plumage does not change into a dismal colour. Instead, they shed a few feathers at a time from their bodies, and their heads frequently lose all of their feathers.

Molting takes place from late summer to mid-autumn. Cardinals are born without feathers, with grey scaling and pink skin, and develop a tan hue during moulting, which fades to light, mottled browns and soft reds before sexually dimorphic colours emerge. Their beaks are black at first, then fade to a coral red tint.

Due to hormonal changes, male and female sounds are sexually dimorphic. To the human ear, however, they are indistinguishable. Northern Cardinals have a wide range of tunes to choose from.

Males are territorial, and one of their sounds to protect their area is a loud, high-pitched whistle from high in a tree. Both sexes learn their songs, which differ depending on where they live.

Their melodies begin with clear whistles in repetitive patterns that gradually grow more diversified. They also emit metallic, brief chip noises as predator warning cries or to help a couple find each other. Northern cardinals return to their flock when they are not mating. 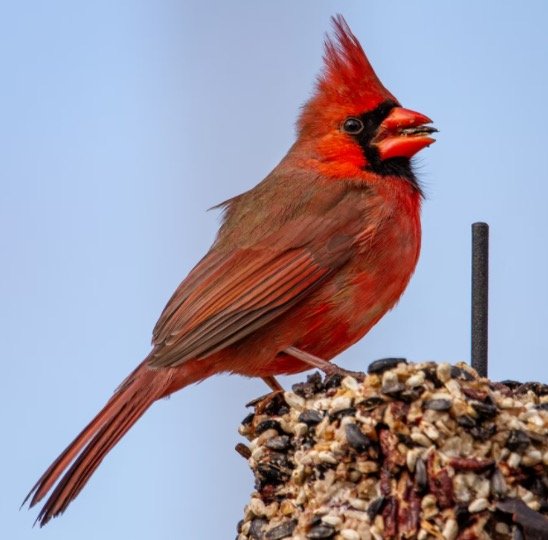 Grains, seeds, fruit, and insects are common foods for northern cardinas. Grasshoppers, caterpillars, grasshoppers, termites, spiders, and beetles are among the insects it digs out from the ground and shrubs with its powerful beak. They are poisoned by insecticides and other toxins.

Other animals may easily observe the northern cardinal since it seeks food on the ground and has brilliant colours. The quest for food makes it susceptible to predators, particularly birds of prey such as eagles and owls, and this is amplified in the winter due to the lack of snow.

Hawks, falcons, and shrikes are among the other birds of prey that pursue northern cardinals. They are also hunted by snakes and household cats.

Squirrels and chipmunks, as well as slamming into windows, can kill them. House cats, chipmunks, squirrels, crows, blue jays, and snakes are all predators of eggs and chicks. 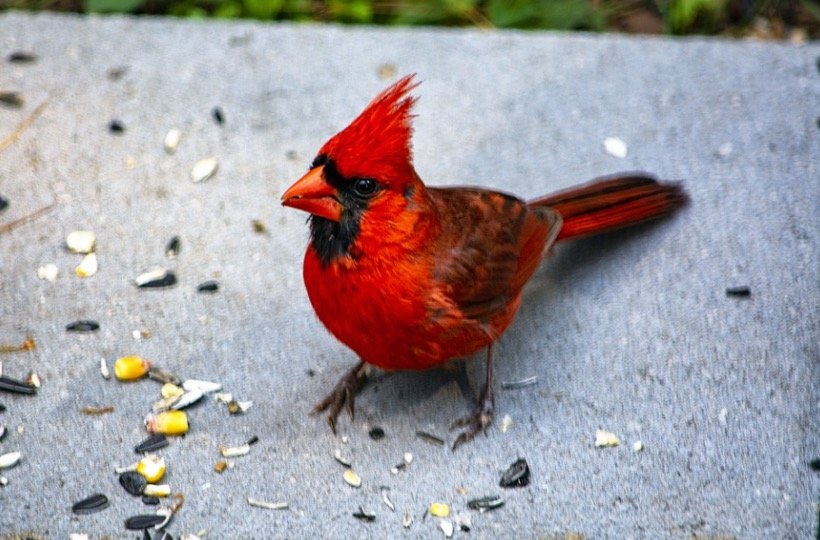 Northern cardinals have a long breeding season that starts in January and finishes in September. They normally mate for life, but they may have different partners in between seasons, and when one dies, they find a new one.

Males feed females in order to establish a relationship with them, as well as supply nesting materials. They sing in unison before laying their eggs. Females lay eggs one to six days after finishing the nest, with a clutch size of three or four eggs each time.

They have two to four broods every year, the first in March and the second between May and July. The eggs are white with brown, grey, or lavender spots that develop thicker at the bigger end and are coloured brown, blue, or green. Their shells are smooth and shiny in appearance.

They have a dimension of 1.02 x 0.75 inches. During the time period of 12 to 13 days, the females undertake the majority of the incubation, with the male incubating momentarily in rare instances. Males feed and care for the existing brood while females incubate the next clutch.

The bird achieves sexual maturity at the age of one year, and in the wild, it lives for an average of three years. Each year, 40% of immature birds perish, and many do not survive to adulthood, living for only a year on average.