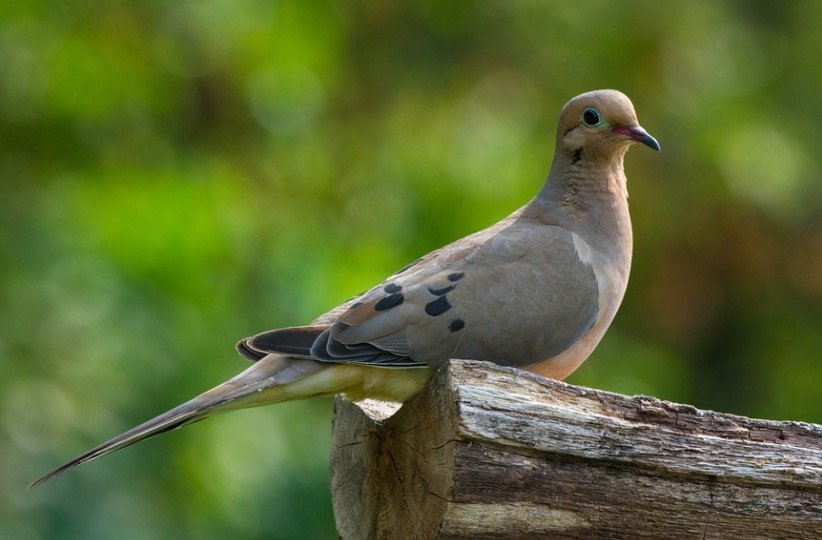 A mourning dove (Zenaida macroura) is a herbivorous creature belonging to the Animalia family, phylum Chordata, class Aves, order Columbiformes, and family Columbidae. Its genus is Zenaida. Its length is up to 8.9 to 14.2 inches, it weighs up to 3.4 to 6.0 ounces, and it has a wingspan of up to 14.6 to 17.7 inches, with a lifetime of up to 1.5 to 5 years in the wild and 19 years in captivity.

A mourning dove is a bird that feeds on seeds. A mourning can be identified by silhouette, whether perched or in-flight, which are the most distinctive characteristics.

Mourning doves are preyed upon by diurnal birds of prey and cats. Physical features include grey-brown skin colorations and feathers on the skin, with a top speed of 55 mph.

The American mourning dove is also known as the grey dove, rain dove, or turtle dove, and was originally known as the Carolina pigeon, or Carolina turtledove. It belongs to the Columbidae family of doves.

It is well-known for its instantly recognised silhouette, mournful call, and symbolism of peace, loss, loved ones, friendship, camaraderie, and other themes as one of the most frequented North American birds. Despite the fact that cats pose the greatest threat, the population is growing. 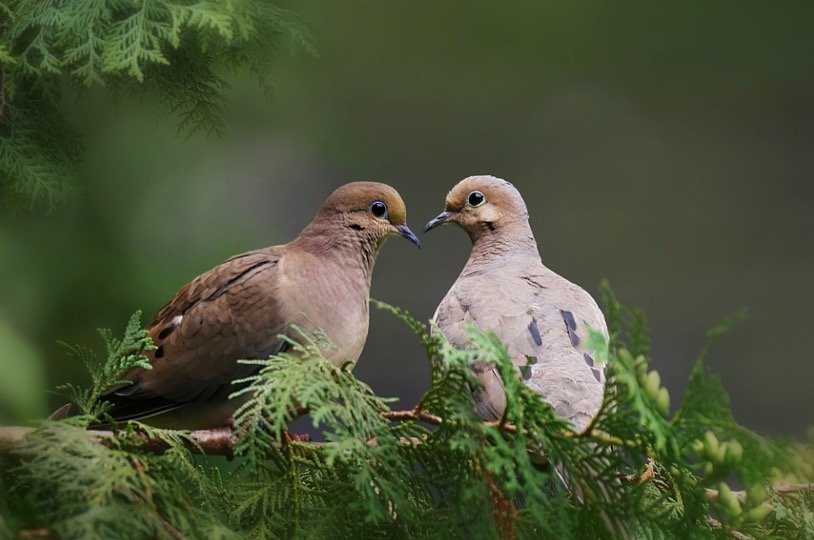 Mourning doves are native to North America, with a range of over 11 million square kilometres (4,200,000 sq mi). They may be found in southern Canada, the southwestern United States, the Greater Antilles, Bermuda’s Atlantic archipelago, south-central Mexico, and Panama.

They first arrived in Hawaii in 1963. Open and semi-open environments, such as urban and suburban areas, prairies, grassland, farmland, and light woodlands, are home to birds. They can be seen in open areas, along roadsides, and on telephone poles.

Mourning doves are extremely flexible, and they can build a nest practically anywhere. Although thick deciduous and coniferous trees are their preferred habitat, they sometimes build nests in bushes, vines, buildings, hanging flower pots, and, as a last resort, the ground.

They start building their nests in March, and their breeding season runs from April to July. Females use twigs, pine needles, and grass blades to construct loose nests, or they use the disused nests of other mourning doves, birds, or tree-dwelling animals such as squirrels.

The Sorrowful As per the IUCN Red List, the conservation status of the dove is Least Concern. It has a population of 475 million people and is growing.

Each year, hunters kill about 20 million and up to 40–70 million deer in the 40 states where they are hunted. Due to lead poisoning from ingesting spent ammunition, the population of the western United States has decreased. 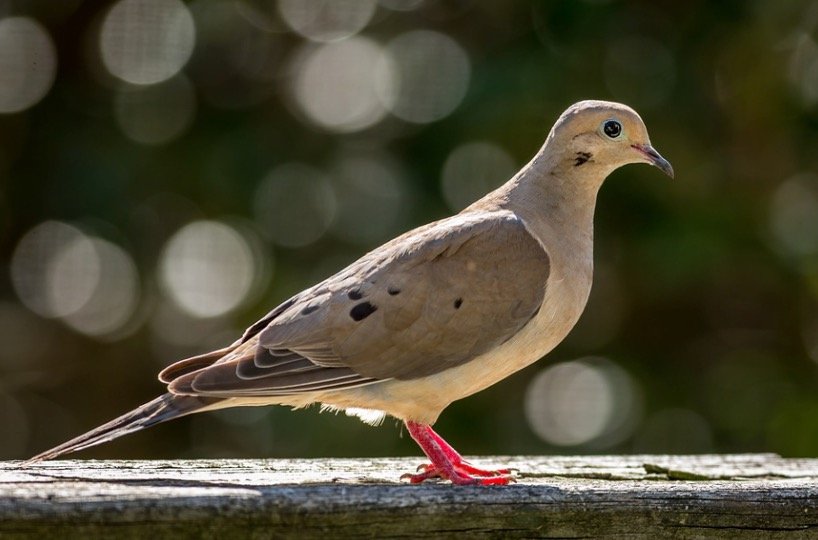 • Its silhouette, whether perched or in flight, is easily identifiable.

• Its cry, which sounds like cooOOoo-woo-woo-woooo, is sometimes confused for that of an owl.

• Eating left-over shot in hunting areas puts them in danger of lead poisoning. 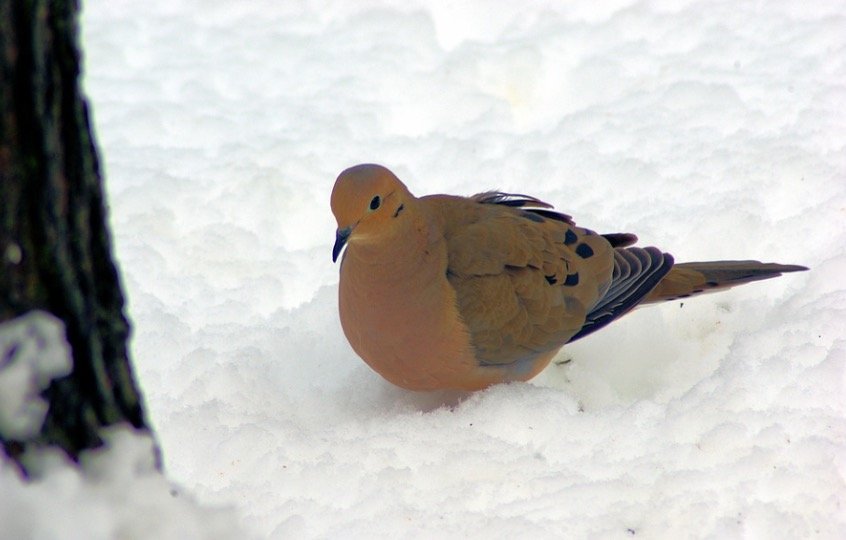 In the genus Zenaida, there are six more species. The mourning dove (Zenaida macroura) is divided into five subspecies, with Z. m. macroura being the most common. Their ranges overlap somewhat, and their looks are slightly different.

The eared dove (Zenaida auriculata), the Socorro dove (Zenaida graysoni), and the pigeon genus Patagioenas are all closely related to the mourning dove. The wild or passenger pigeon (Ectopistes migratorius), which was threatened with extinction in the early 1900s, is more distantly related.

Finally, it resembles the European and North African species (Streptopelia turtur), which is also known as the “turtle dove,” but is distinguished by the particular name “turtur,” which is derived from its purring turr turr turr voice. 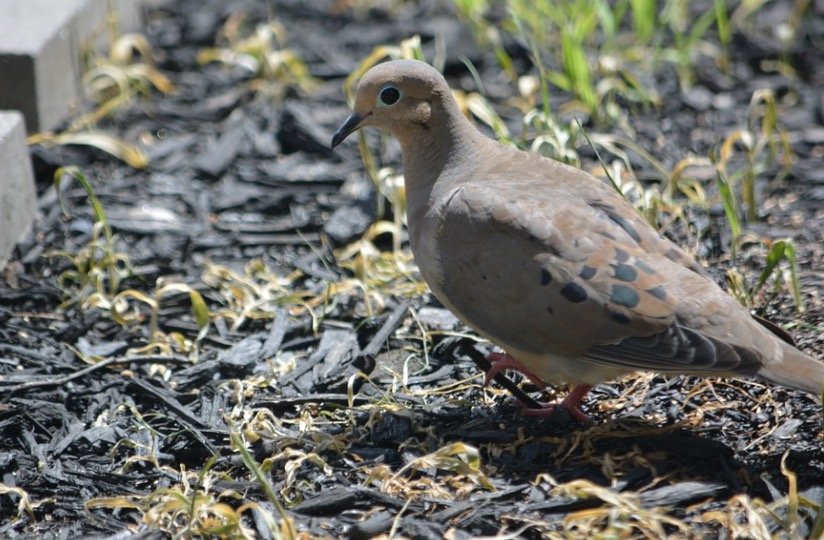 Its plumage is light grey-brown above and pinkish grey-brown below, and the broad, elliptical wings have black markings. On the long, tapering tail, white outer tail feathers contrast with black interior tail feathers.

It features a spherical head, short reddish-brown legs, and a dark brown-black beak. A crescent-shaped patch of dark feathers surrounds the dark eyes, which are encircled by light skin.

Adult males feature vivid or iridescent purple-pink spots on the sides of their necks, light pink breast coloration, and a bluish-grey head. Females are somewhat smaller and have more brown in general than males.

Females lack the brilliant feather patches as well. Until they reach 3 months of age, juvenile birds have a scaly appearance and are darker in colour, at which point their plumage is indistinguishable from that of adults. 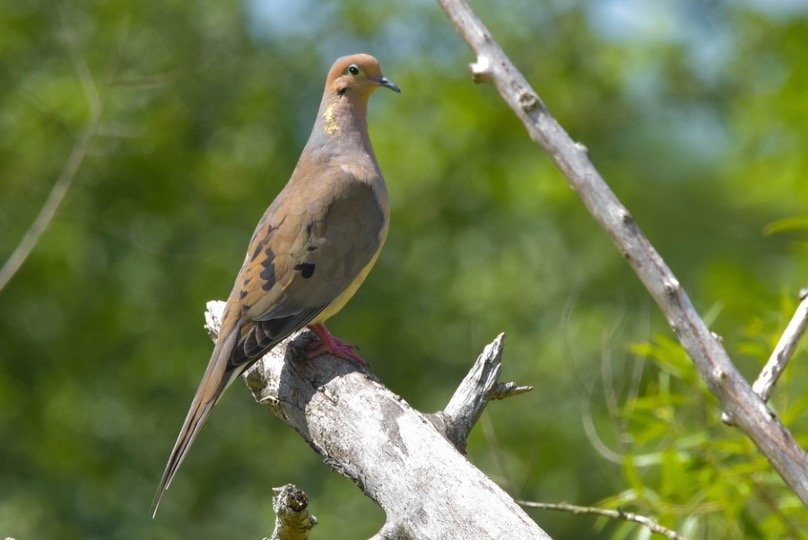 It is spoken by the male as a wooing cry.Pair members preen each other by softly nipping around the neck as a pair-bonding ritual, progressing to grabbing beaks and bobbing their heads up and down in sync.

When it’s hot, mourning doves might be observed panting since they can’t sweat and have to consume a lot of water by sucking it in. They sunbathe or rainbathe for up to twenty minutes by laying on the ground or on a flat tree branch, bending over, and stretching one wing while attempting to maintain the position, hence earning the nickname “rain dove.”

They also take showers in little ponds or birdbaths, and they dust bathe often. Their flying is lightning-quick and razor-sharp. They sleep communally in trees outside of the mating season.

They sleep by laying their heads between their shoulders, close to the body, rather than tucking their heads beneath the shoulder feathers, as many other species do. A parent will pretend to be hurt and flap on the ground at a distance from the predator at the last minute to divert predators away from the nest. 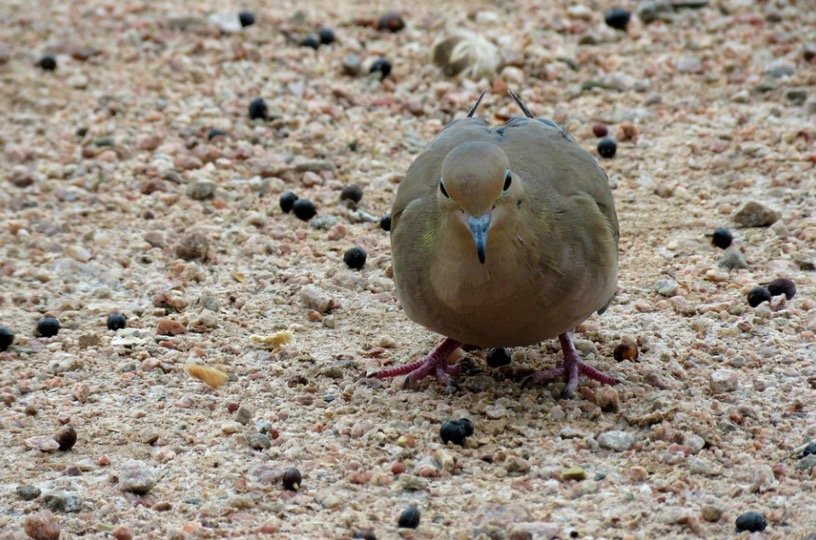 The diet of mourning doves is primarily herbivorous. They eat mostly grass and grain seeds, which make up 99 percent of their diet, but they also eat snails and insects on occasion.

They frequently take grit in the form of fine gravel or sand to aid digestion later, and then fly away once their crop is full. They prefer to consume what is easily visible on the ground or on plants since they are ground foragers.

The mourning dove’s main predator is cats. It’s also a game bird that may be hunted in 40 states. Diurnal birds of prey such as hawks and falcons, as well as corvids, grackles, and rat snakes, frequently feed on them and their young.

Another danger is lead poisoning from eating spent shots in hunting grounds. Therefore, some hunters plant their favourite seed plants to attract them to the area. 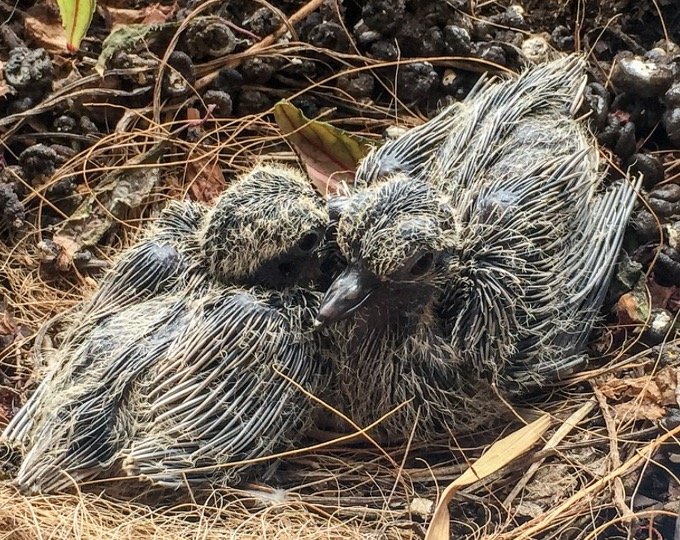 They start building their nests in March, and their breeding season runs from April to July. It might occur as late as October in certain locations. Mourning doves are monogamous, and they stay with the same partner for the rest of their lives.

They are prolific breeders, capable of having up to six broods in a season, which is required owing to the annual death rates of 58 percent for adults and 69 percent for young. Mourning Doves will reuse their own or other species‘ nests on occasion.

Males give nesting locations for females to choose from, and the female constructs the nest with the aid of the male in thick deciduous or coniferous trees out of twigs, pine needles, and grass blades.

Females deposit 1-2 eggs, which take two weeks to hatch after being nurtured. The newborns are known as squabs, and they are given milk for 3–4 days before eating seeds.

They learn to fly in 11–15 days and are fed by their father for up to two weeks after that. The initial moult occurs at 3 months, and mature moulting occurs once every 14 days.

They may breed after 85 days. If the youngsters survive their first year in the wild, they can live for another 4-5 years. They may live up to 19 years in captivity.