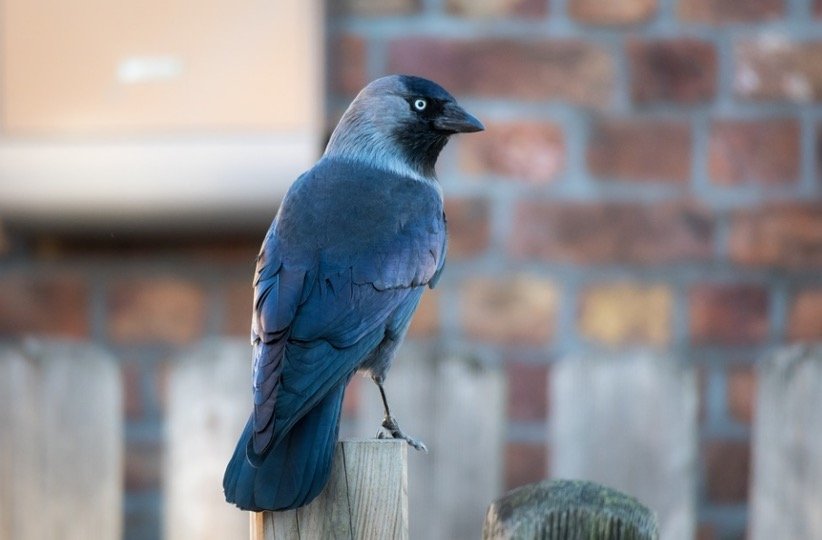 A Jackdaw is an omnivorous creature belonging to the Animalia family, phylum Chordata, class Aves, order Passeriformes, and family Corvidae. Its height is up to 13 inches, it weighs up to 8 ounces, and it has a wingspan of 27 inches, with a lifetime of up to 5 years.

A jackdaw is a bird that feeds on seeds, fruits, insects, spiders, snails, carrion, and bird eggs. The silvery white plumage around the neck is the most distinguishing characteristic. Jackdaws are preyed upon by birds of prey, stoats, weasels, polecats, cats, and rodents.

Physical features include grey, purple, silver, black, and white skin colorations, and feathers on the skin, with a top speed of 25 mph.

The jackdaw is a cunning and mischievous bird, as well as a proficient scavenger and a loyal companion. The Eurasian jackdaw, which may be found practically everywhere between Western Europe and Central Asia, and the Daurian jackdaw, which lives in eastern Asia, are the two recognised species. They are very bright and social as members of the Corvid (crow) family.

They are one of the very few tool users in the animal kingdom. There are many intriguing facts about this smart bird, which is a vital piece of symbolism in many human civilizations. 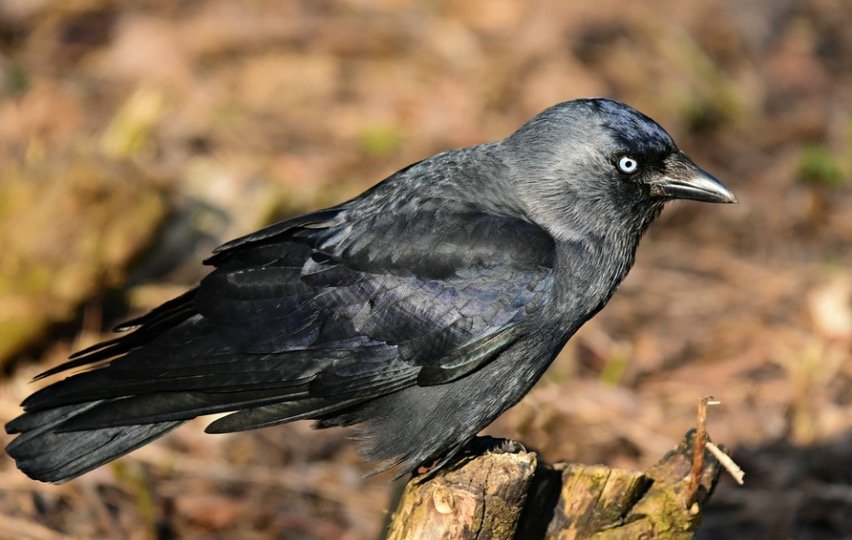 Across its entire native range of Eurasia, this bird may be found in farmlands, forests, cliffs, and even urban areas. They may be spotted foraging in large numbers throughout open terrain.

This bird will build a nest in practically any type of cavity it can find, including tree holes, chimneys, attics, and other man-made buildings that are the same height as they are in the wild.

The nest is divided into two sections, one of which is lined with bigger sticks and the other with wool or hair. In the wild, it has a five-year average lifespan, but this can be cut short by predators, sickness, and famine. 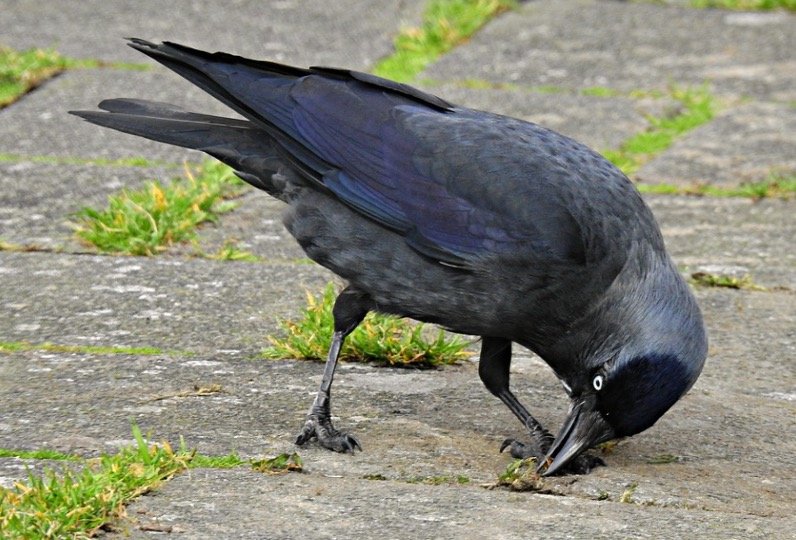 • The complete plumage of this bird is replaced every year during the summer and fall moulting season. With time, its feathers will begin to turn grey.

• This bird is drawn to shiny objects. In these tales, it is frequently portrayed as a thief.

• While the jackdaw is not suitable for keeping as a pet, it may be tamed and taught numerous tricks. One of the most fascinating things about it is that it has a remarkable capacity to imitate human speech and other noises.

The jackdaw’s taxonomic taxonomy is still a point of contention. It has usually been classified as a member of the genus Corvus, which is Latin for raven, but some taxonomists believe it belongs to a different genus named Coloeus, which is Greek for jackdaw. C. monedula is the scientific name for the Eurasian jackdaw species.

This is taken from a Latin term that means “money,” and refers to the creature’s proclivity for stealing sparkling objects. C. dauuricus is the etymology of the Daurian jackdaw. 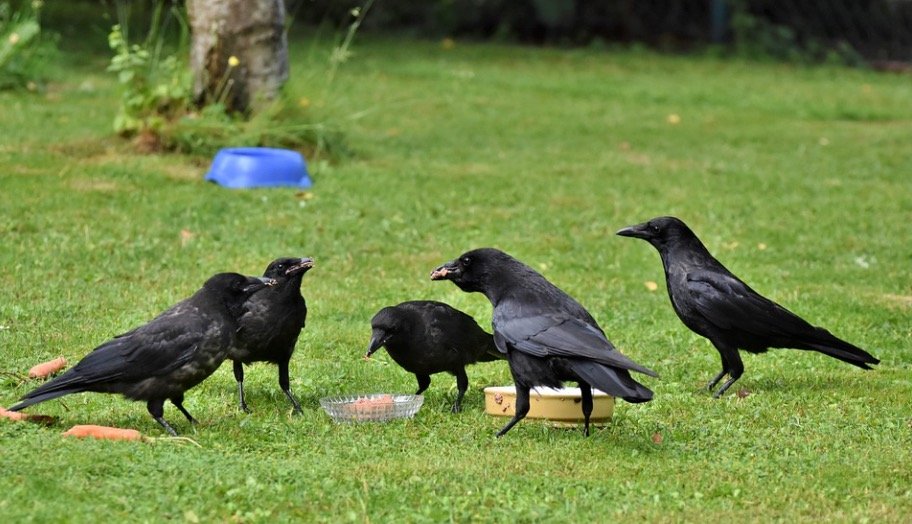 The jackdaw is the tiniest member of the corvid family, at roughly 13 inches tall and weighing around 8 ounces. This weighs roughly the same as a standard drinking glass. While it has crow-like black plumage, the pale white iris and light grey or white nape around the head or neck are the most distinguishing features.

Juveniles have drab plumage with brown irises and need a long time to mature into adults. They also have black legs and sharp black beaks. The mating pair, which unites for life, is the foundation of the jackdaw’s “society.”

The couple roosts and eats in much bigger colonies, which can number in the tens of thousands of birds. Despite the fact that the colony members are virtually totally unrelated, they appear to work together to acquire food and resources.

When one member of the colony discovers a plentiful supply of food, it will occasionally warn other members of the colony of the location. To communicate with one another, these birds emit a variety of noises.

The jack or chak welcome sound, after which they are named, is the most common vocalisation. They have warning noises, mating calls, and roosting cries, among other things. Jackdaws, which belong to the Corvid family, are regarded as being among the most intellectual creatures in the world.

They are capable of using tools, solving issues, and maybe even recognising particular human faces. The majority of jackdaws spend the whole year in the same location, but the northernmost populations do move south for the winter. During the late fall months, they may be seen soaring in huge formations. 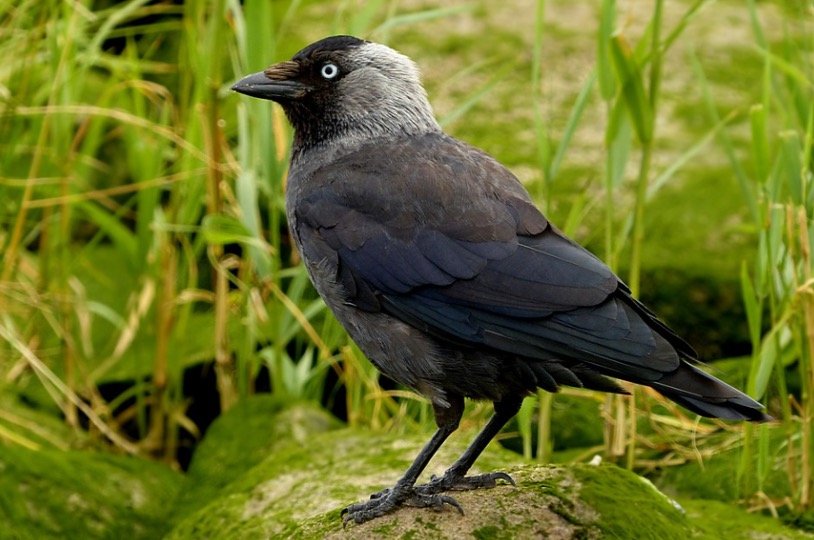 Both birds are quite simple to confuse for one another. The crow, on the other hand, may be distinguished by its larger size and darker plumage. The jackdaw’s light-colored feathers around the neck are a dead giveaway.

This bird is an omnivorous scavenger. It’ll consume practically everything it can get its hands on. Large colonies of crows and rooks can be observed feeding on the ground, sometimes alongside crows and rooks.

Seeds, fruits, and tiny invertebrates like insects, snails, and spiders make up the majority of its food. If it comes upon any abandoned carrion or unattended bird eggs, it will make a rapid meal of these as well. It has also been known to raid garbage cans, landfills, and gardens. 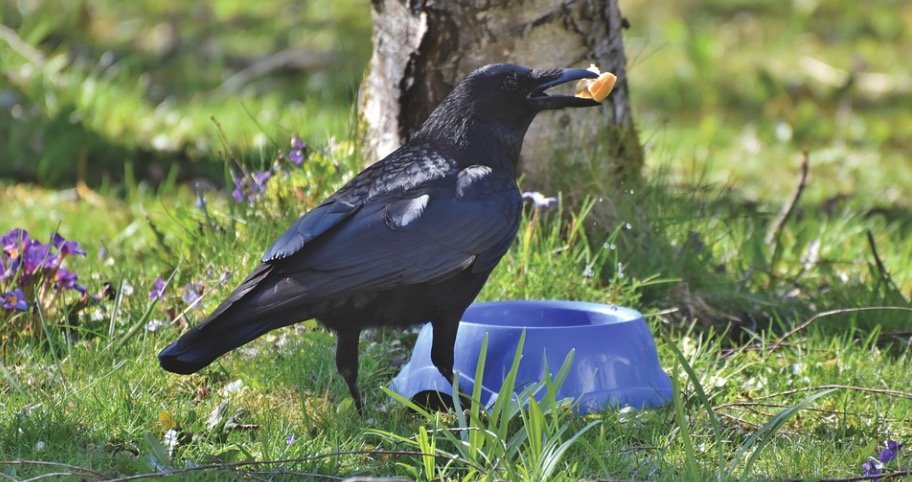 Apart from predators, this bird is quite adaptive and flexible in its native habitat. Both the Eurasian and Daurian jackdaws are considered species of least concern on the IUCN Red List.

For the time being, their population numbers are quite constant. Birds of prey, stoats, weasels, polecats, both wild and domesticated cats, and rodents all hunt on it.

Many of these predators will go after eggs if they see one, but others will also go for adults. To drive predators away, jackdaws will scream and mob predators.

The jackdaw has a deep monogamous attachment with another partner, and they often stay together for the rest of their lives. The female will produce a brood of four to six eggs at a time during the yearly mating season, which runs from April to July.

She is in charge of the majority of the incubation duties, while her father is in charge of all food foraging. The eggs hatch in the sequence in which they were deposited asynchronously.

After roughly a month, the first chick may have begun to fully fledge, while the final chick is barely beginning to emerge from its egg. Nevertheless, if food is running low, the last chicks may be abandoned to perish.

The juvenile will attain sexual maturity during its second year for those who survive. In the wild, it has a five-year average lifespan, but this can be cut short by predators, sickness, and famine.