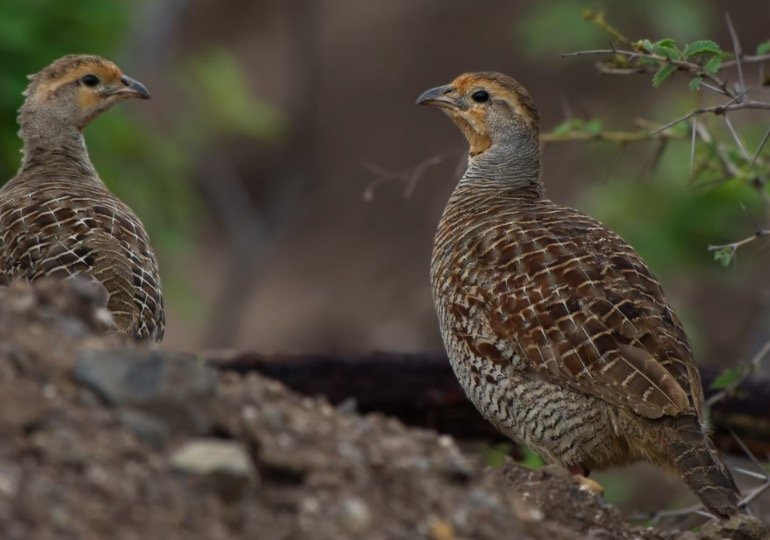 A grouse (Tetraoninae) is an omnivorous creature belonging to the Animalia family, phylum Chordata, class Aves, order Galliformes, and family Phasianidae. Its genus is Tetraoninae. Its length is up to 12 to 37 inches, it weighs up to 0.6 to 14 pounds, and it has a wingspan of up to 22 to 40 inches, with a lifetime of up to 1 to 10 years.

A grouse is a bird that feeds on insects, nuts, seeds, and berries. Long tail feathers and feathered legs and toes are the most distinguishing characteristics. Grouse are preyed upon by foxes, lynx, and birds of prey.

Physical features include brown, yellow, red, blue, black, white, and green skin colorations, and feathers on the skin, with a top speed of 6 mph.

Feathers on the nose, legs, and feet of a bird species. Grouse are stocky, medium-sized birds native to the Northern Hemisphere. Their feathers closely mimic the environment in which they live. This plumage serves as concealment and aids in their survival.

Grouse are a type of bird that is related to chickens, turkeys, and pheasants. In their grassy and woodland environment, around eight million of these upland game birds are shot each year for food or sport. 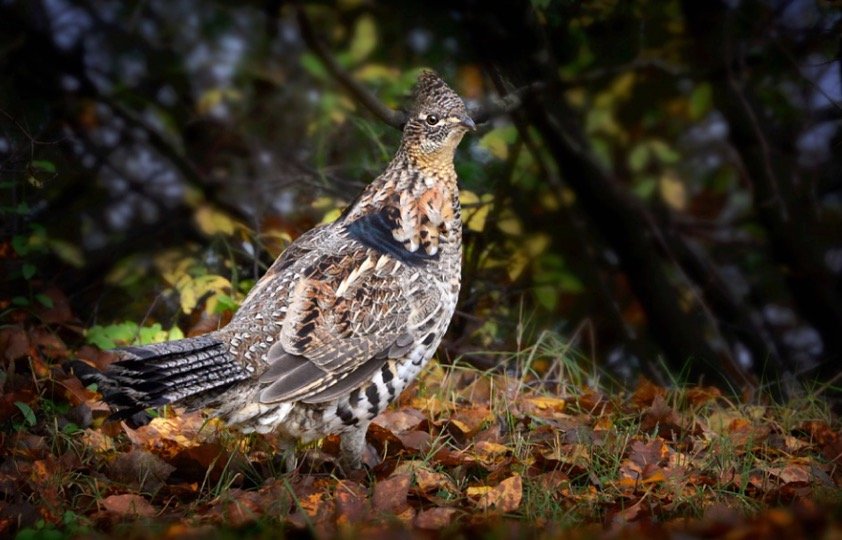 Grouse may be found in almost every type of habitat in North America. They may be found all across the United States, from Alaska’s subarctic areas to Texas’ grasslands. Grouse live in tundra, heathlands, grasslands, temperate woodlands, and boreal forests, among other habitats.

Some grouse species can also be found in Europe and Asia. Because they do not live in the watery environments of wetland gamebirds like ducks and geese, this group of birds is sometimes known as “upland gamebirds.”

Grouse usually nest in tall grasses or on the forest floor, depending on where they reside. Grouse that dwell in icy areas dive and dig beneath the snow to survive. Their body heat aids in the formation of an igloo-like shelter that is warmer than the surrounding air.

Male grouse often maintain a territory of 10 to 50 acres in size. They don’t want any other men in the vicinity. Female grouse roam a 100-acre area. Females are unconcerned with other grouse on the same property. The majority of grouse are non-migratory. This implies that they spend the entire year in the same environment.

During the winter, however, the ptarmigan, or snow grouse, migrates from its warm-season arctic home to the northwest states or lower altitudes. Grouse are regularly hunted for their meat.

It is standard practise in North America and Europe for hunting groups to cultivate grouse by providing them with territory on which to thrive. During a hunt, hunters can locate and “flush out” particular adult birds in these semi-protected environments. 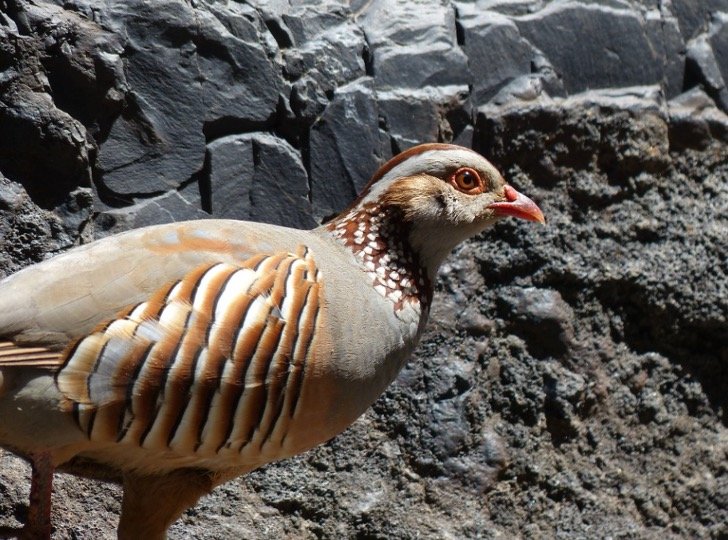 The number of grouse in the world fluctuates greatly from season to season and year to year. The population might be reduced by thousands due to harsh winters, poor seasons, or sickness.

Each hunting season, there are millions fewer birds than there were only a few months prior. Grouse, on the other hand, bounce back quickly. They have a large clutch of eggs and can nest again during a mating season if the first set of eggs is lost.

There are around 15 grouse per mile of land in North America. In America, the sage grouse is the species most threatened by habitat loss. In the United States now, there are only eight million sage grouse in the nation.

The sage grouse is a “near-threatened” species, yet it is not designated as endangered. In 2019, the Trump administration issued an order allowing oil drilling in sage grouse habitats in the western United States.

This move jeopardises the habitat of millions of sage grouse, and many biologists believe the sage grouse will become extinct as a result of the drilling.

• Grouse are birds with feathers on their nose, legs, and feet.

• The female hen is around half the size of the male cock.

• Each year, around eight million birds are killed in legitimate grouse hunts. 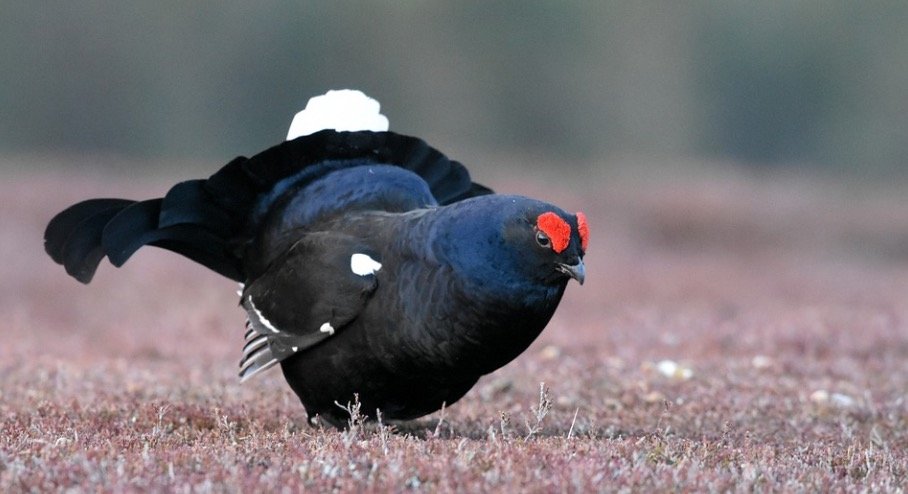 Grouse belong to the Galliformes order and the Phasianidae family. Tetraoninae is the scientific name for this bird. This name is derived from the Latin words tetrao-, which means “gamebird,” and -idae, which means “appearance” in ancient Greek.

In the United States and Canada, there are around ten different species of grouse. The blue grouse, spruce grouse, ruffed grouse, sharp-tailed grouse, and sage grouse are among them. The larger and lesser prairie fowl, willow ptarmigan, rock ptarmigan, and white-tailed ptarmigan are also featured.

Grouse are large, ground-dwelling birds that build their nests in tall grass and other ground cover. When disturbed or fleeing from predators, they may glide for short lengths of time in the air.

The birds’ brown, grey, and red feathers protect them from the elements and help them blend in with their environment. To keep warm and walk across snow, they grow feathers over their noses, legs, and toes. The birds’ necks are broad, their legs are lengthy, and their beaks are small and hooked.

The majority of grouse barely reach a height of 30 cm. However, European and Asian wood grouse may reach heights of up to 100 cm. The sage grouse is the largest North American grouse, reaching heights of 62 to 70 cm.

It’s roughly the same size as a chicken and smaller than geese. In adulthood, men are often twice as big as women. Forest grouse spend most of their time alone or with their chicks. A clutch is a hen’s nest of eggs or a bunch of chicks.

Prairie grouse are more gregarious, and they don’t mind meeting new people in their environment. Arctic and tundra grouse create flocks of up to 100 birds in the fall and winter. Except for the willow grouse, which only has one partner at a time, most males mate with many females. 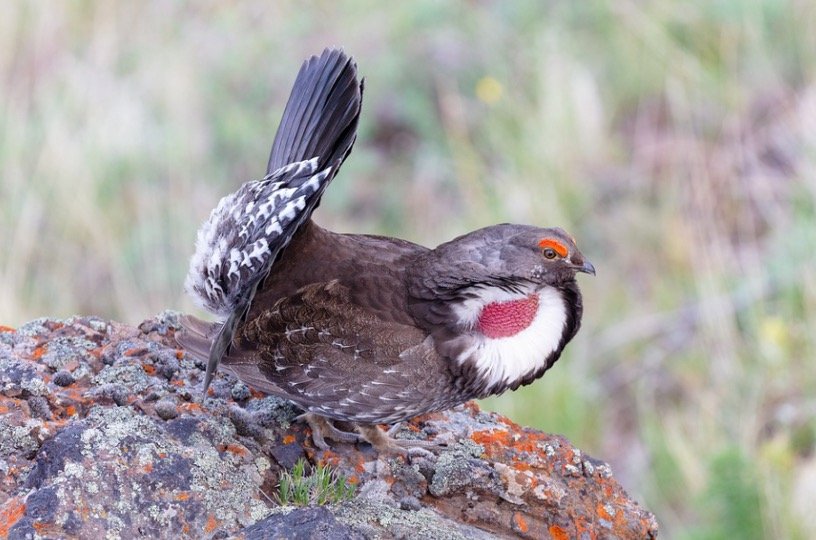 Grouse are omnivores, meaning they eat everything. Insects, spiders, worms, lizards, snakes, eggs, snails, and tiny rodents are among their favourite foods. Grass, fruits, berries, nuts, sprouts, flowers, and seeds foraged from the forest floor or other habitat grounds are their favourite diets.

Winter grapes, wintergreen, apples, and clover are other favourites. Evergreen tree needles are a favourite food of several grouse species. Many trees provide them with an unending supply of needles, which other animals disregard. In the winter, the sage grouse only eats sagebrush and hides beneath it.

Sage is also a big element of their nutrition throughout the summer. Grouse will consume sand or other grit on occasion. This aids in the digestion of some of the tough vegetables they consume.

Many other birds do not survive the hard winters that grouse do. They also have fat, meaty bodies that are delicious to people and animals alike. Many four-legged predators are attracted to the birds as a result of this. Foxes, wolves, wildcats, and lynx are among them.

Grouse are also eaten by large birds of prey, and their eggs are eaten by snakes. In the United States alone, nearly eight million grouse are hunted each year. Fortunately, many of these hunts take place on farms where grouse are hatched to increase the population.

Grouse in the wild have huge clutches, which means each mother has a lot of eggs and young. This helps to prevent the birds from becoming extinct as a result of hunting. The most serious risks to grouse are global warming and habitat loss.

Temperature changes caused by global warming have an impact on these birds. Hatchlings and whole populations can be killed by early spring weather, high heat, and heavy rain. Early spring disrupts the plant cycle, causing their food source to deplete prematurely.

When humans develop cities where woods, prairies, or grasslands once existed, habitat is lost. As a result, the birds are pushed out of their natural habitats and into less favourable environments where they cannot thrive.

Farming and forest fires damage their habitat as well. Scientists are researching strategies to assist grouse in preserving their habitat. One of the most important ways we can assist them is by preserving forests and replanting trees.

Except for one species, all male grouse mate with many ladies at the same time. Only the willow grouse has a single partner each season. Male grouse compete for mates by putting on courting displays at dawn and dusk each spring.

They puff their feathers and bang their wings on fallen logs as they dance and swagger. Male sage grouse and prairie fowl, for example, inflate a vividly coloured neck air sac to attract females. Males may battle in order to win ladies’ hearts.

Females use the ground to create their nests. They locate a natural depression in the ground’s surface that is protected by vegetation such as grass or sagebrush. Plant materials, like leaves and twigs, are used to line this nest.

Around a week after mating, female grouse begin depositing eggs that resemble smaller chicken eggs. She only lays one or two eggs every day or two. She may replace eggs that have been lost or damaged with fresh ones.

When she’s finished, she’ll have a clutch of five to twelve eggs. If all goes according to plan, each of them will hatch in 21 to 28 days. Chicks leave the nest as soon as they hatch. The mother grouse watches over her young.

The mother guards her children against predators and other dangers. She leads them to suitable foraging spots, where the chicks must forage for their own plant and bug diets.

Male willow grouse assist their female partners in protecting their young. Males in other species, on the other hand, do not care for the young. The chicks have wings and can fly in short bursts by the time they are two weeks old.

They do, however, remain in the nest and in close proximity to their mother until they achieve adult size and weight in the fall. That was about the age of 12 weeks. When grouse are a few years old, they can mate for the first time.

In the wild, most North American grouse survive for seven or eight years. Some people survive for up to 11 years. Cold weather and sickness, on the other hand, can kill up to three out of every four juvenile grouse each year.