A Kookaburra is a carnivorous creature belonging to the Animalia family, phylum Chordata, class Aves, order Coraciiformes, and family Alcedinidae. Its genus is Dacelo. Its length is up to 15 to 17 inches, and its height is up to 15.4 to 16.5 inches. It weighs up to 0.8 to 1 pound, with a wingspan of up to 25 to 26 inches and a lifetime of up to 15 to 20 years.

A Kookaburra is a bird that feeds on insects, reptiles, crustaceans, small birds, rodents, and frogs. The laugh-like sound is the most distinctive characteristic. Kookaburras are preyed upon by birds of prey, large reptiles, quolls, foxes, pet cats, and humans.

Physical features include brown, grey, blue, black, cream, and white skin colorations, and feathers on the skin, with a top speed of up to 20 mph.

The kookaburra is the biggest kingfisher in the world. A significant subgroup of the kingfisher bird is the kookaburra, sometimes known as the laughing kookaburra. It’s diurnal, which means it’s most active during the day.

At night, they will sleep for roughly 12 hours. They’re most frequent in eucalyptus trees, which are also known as old gum trees.

According to Australian tradition, the dawn symphony of the kookaburra is said to provide a cue for the “sky people” to “ignite the sun each morning.” Kookaburras are flock-living, sociable birds. 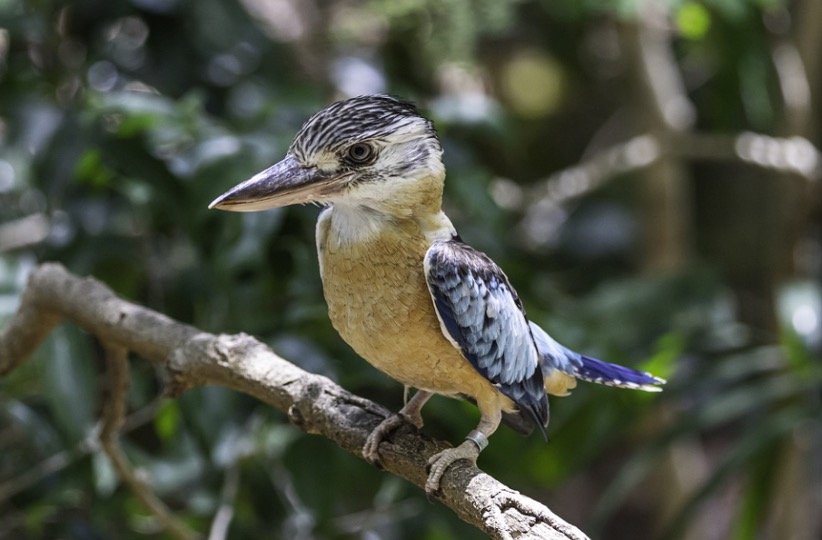 The kookaburra is endemic to eastern Australia, although it has spread to other parts of the country. The Oceana area is home to the majority of kookaburras. These kingfishers may also be found in southern Australia, New Zealand, New Guinea, and Tasmania.

Kookaburras may also be seen in parks, gardens, and even people’s backyards. Woodland forest regions and wetlands are the best places to look for these intriguing birds. They live in temperate regions.

They may be seen climbing trees or collecting prey. It will most likely be simpler to hear them than to see them. At twilight and in the morning, listen for their laugh-like sound to hear a whole group of kookaburras “singing” loudly together.

Both male and female kookaburra partners collaborate to build nests and care for their offspring. Terrestrial tree kingfishers will burrow into arboreal termite mounds and use naturally formed holes in trees.

The entrance to these mounds is usually around four inches wide and two feet deep. The exact number of kookaburras in the wild has yet to be determined. Despite the fact that there is no official count of these birds, the population is thought to be constant.

The kookaburra’s conservation classification is “least concern,” meaning there is now no substantial threat of population decrease. 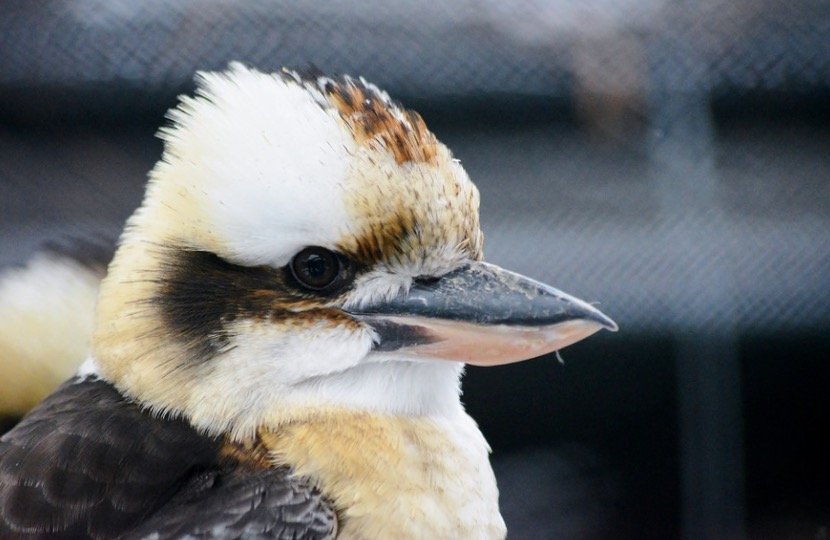 • The kookaburra, unlike other kingfisher species, does not pursue fish.

• Snakes are reported to be preyed upon by kookaburras.

The name kookaburra is derived from the Aboriginal Wiradjuri gugubarra, which is an imitative phrase that sounds like a kookaburra and means “to laugh.” 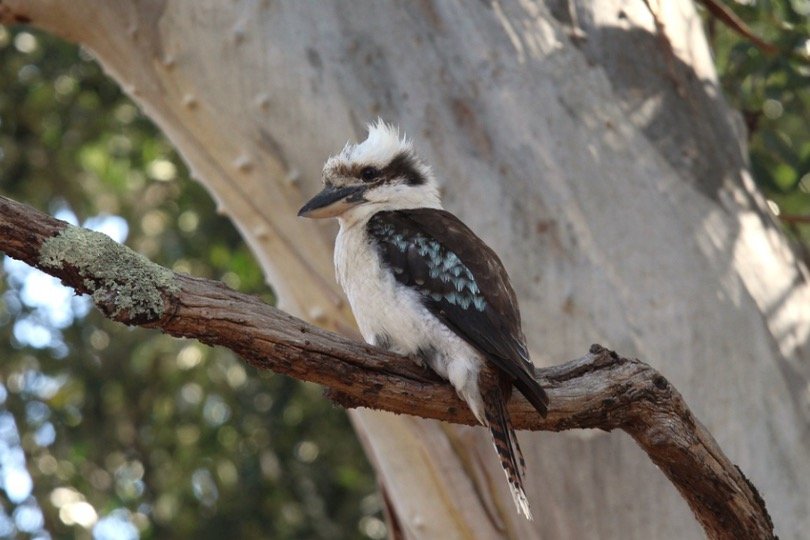 The bodies of kookaburras are often brown, white, or cream in hue. Their eyes are dark brown with dark brown stripes across them. Gray and black feathers are also possible in their feathers. Blue flecks can also be seen towards the tail of males.

Brown eyes are common in kookaburras. The length of their formidable beak is between 8 and 10 cm. These birds range in height from 15.4 to 16.5 inches and in length from 15 to 17 inches. Females are somewhat larger in bulk than males, weighing between 13 and 16 ounces.

The kookaburra has a wingspan of between 25 and 26 inches, which is more than two feet long. There are a few interesting facts concerning their defensive capabilities. Their colours help them blend in with their surroundings, and when challenged, they puff up their feathers to make themselves appear larger.

Kookaburras, unlike many other bird species, do not migrate. They stay in the same place all year. They do not migrate south to spend the winter. Consequently, they snuggle close in order to stay warm. They have a good sense of temperature regulation. 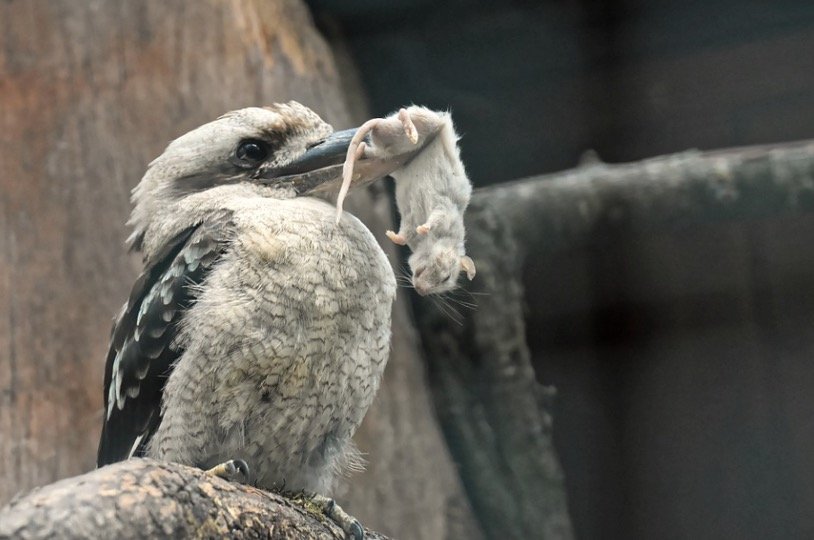 The kookaburra is a carnivore, which means it solely consumes other creatures’ flesh. It will sit on a tree and watch for prey to approach. When the kookaburra sees its meal, it swoops down and grabs it with its powerful beak.

The method in which this animal kills its prey is one of the more gruesome facts about it. It batters and renders the victim motionless, as well as making it more fragile by repeatedly striking it against a hard surface such as a tree limb.

The kookaburra will skip the pounding and swallow the victim whole if the prey is tiny enough. Snakes, huge insects, crabs, rodents, frogs, and small birds are among the creatures eaten by kookaburras.

A kookaburra’s diet also includes bird eggs. Kookaburras are regularly fed mice, mealworms, and crickets in captivity, such as at zoos.

In the wild, the major danger to kookaburras is habitat loss. In Australia, wildfires play a significant role in the destruction of people’s houses. Humans harvesting these amazing creatures for the pet trade endanger the natural population.

Unfortunately, pesticides used to eliminate rodents and other exotic species, which are easy prey for kookaburras, can poison them indirectly. With a steady population, the IUCN has rated these birds as least concerning on the red list. Kookaburras are also preyed upon by a variety of natural predators.

Kookaburras are eaten by birds of prey such as eagles, owls, falcons, and hawks. They will also be eaten by large reptiles such as pythons and monitor lizards.

Quolls, foxes, and even domestic cats are among the other predators. These creatures, in particular, may prey on fragile chicks by taking them from their nest. 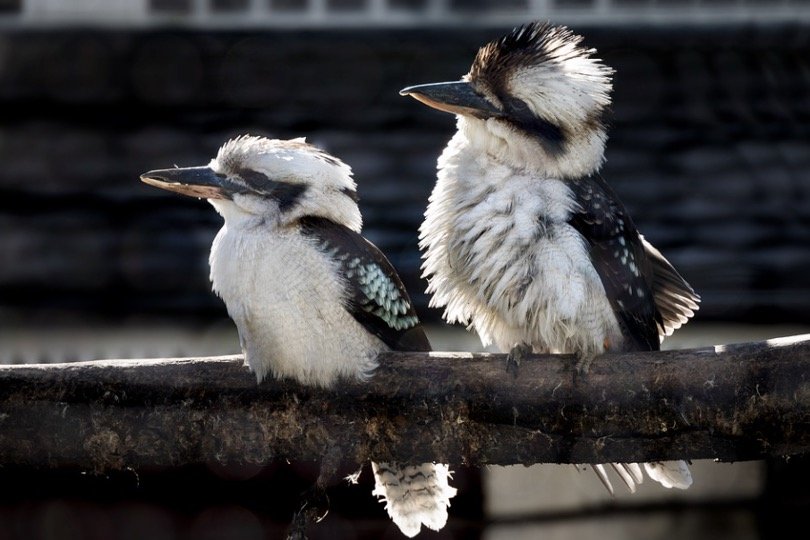 Monogamous kookaburras stay together for the rest of their lives. Between August and January, the breeding season takes place. In readiness for mating, both the male and female will cry out to each other, and the male will carry food to the female.

Between two and four eggs will be laid by the mother kookaburra. The eggs hatch after 25 to 29 days, and the chicks are born. The chicks do not have any feathers when they are born. In a fight for food, the chicks will sometimes assault and kill the youngest among them.

Siblings will assist in the care of the new young throughout incubation and after hatching. Before leaving the nest, the chicks are fed for roughly a month, but they can stay with their family for up to four years.

Around the age of one year, they acquire sexual maturity. Kookaburras moult once a year, usually in the late winter or early spring. In the wild, kookaburras may live for 15 to 20 years, and in captivity, they can live for over 20 years.