Garter snakes are small to medium-sized snakes of the genus Thamnophis of the family Colubridae that are commonly known by the name garter snake. The range of the native Thamnophis species spans from the subarctic plains of Canada to Costa Rica. 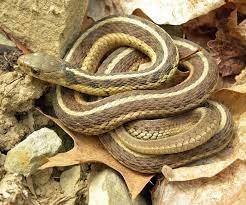 They are the most common type of snake encountered by humans. They have adapted well to human settlements, so you can find them in suburban yards, municipal parks, farmland, and cemeteries. Grassy areas near freshwater sources like ponds, lakes, ditches, and streams are ideal, but not necessary. If an Eastern Garter Snake feels threatened or trapped, it will fight back. As an illustration, if you capture one or otherwise stress it out, it may urinate on you or exude a noxious stink from its glands. Sometimes they’ll resort to biting if they feel cornered.

One of the most common wild snakes in North America is the Common Garter Snake. They can be found in every state east of the Mississippi and in several west of the river. In addition, many Canadian regions are home to endemic species. Most species have at least one cream longitudinal stripe running down their bodies, which contrasts with their olive, tan, grey, or black background. It is not uncommon for them to reach a length of four feet, but two feet is more typical. There are 13 recognized subspecies of Common Garter Snakes. The coloration and patterning of each subspecies are distinct. Red or orange patterns on the sides characterize the Red-Sided subspecies. 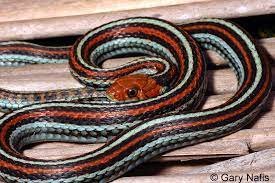 Similar to the San Francisco garter snake, which is endemic to the Bay Area, the Texas garter snake is named after the state in which it is most commonly found. Central Texas is teeming with Texas garter snakes. Many garter snakes in Texas are a dark greenish black, with a single reddish-orange stripe down their backs and two yellow stripes on either side.

There are few instances of the Albino Garter Snake occurring in nature because of a genetic colour morph. The sight of this snake in a backyard is extremely unusual. A Checkered and Plains Garter Snake has produced many Albinos, which are now part of a collection of reptiles. The only real distinction between members of this species is their coloring. They are the same size and design as their wild counterparts. Olive, grey, or black with yellow markings are common colors for a normal Garter Snake. Albinos can have a wide range of skin tones, including white, cream, yellow, orange, and peach. Another distinguishing feature of albinos is their distinctive pink eyes. 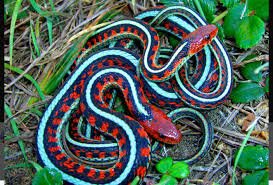 They are not particular about where they live, like other garter snakes. In the United States, you can find them in any type of natural habitat, be it a forest, shrubland, a marsh, a farm, or even a Food like frogs, earthworms, and leeches are some of their favorites. Upon reemergence from hibernation, there may be a shortage of females in some regions. When this happens, large groups of snakes (sometimes numbering in the dozens) congregate for a “mating frenzy.” 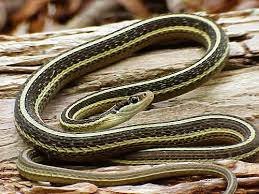 The extraordinary, one-of-a-kind hunting strategy of the Western Ribbon Snake. For land travel, they use a series of three short, light thrusts of the head and upper torso in a variety of directions. It’s like punching somebody in the face, only their mouth is closed. This causes the sleeping frogs to jump up, which draws the garter snake closer. From such a vantage point, the ribbon snake can use its incredible speed to seize its prey.

One of the many variations of the Common Garter Snake is the Bluestripe Garter Snake. The body of a Blue-Striped Garter Snake is the standard dark grey, but the blue stripes stand out if they were drawn on with a highlighter. Down their back and sides, they sport blue stripes. The typically blueish-white ventral surface marks the end of the blue sides. This subspecies’ distribution is surprisingly restricted to the Gulf Coast of Florida between Apalachee Bay and Tampa Bay. This species often don’t get very big, maxing out at lengths of 18–26 inches.

Problems arise even for herpetologists with years of experience. The number of subspecies is unknown for sure, however, scientists assume there are six due to the broad range of colors.

The meadows and woods of the world are both home to Garter Snakes found on land. Even at elevations of up to 4,000 meters (13,000 ft), they persist. Land animals live mostly on land, as their name implies. On the other hand, these garter snakes have impressive swimming abilities.

The only other garter snake in the Americas, this one also has a tendency to strangle its prey. Most garter snakes will quickly seize and consume their prey whole, scraping it against the ground to break it up if required. 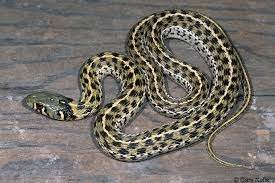 Many sections of Texas, as well as neighboring New Mexico, Oklahoma, Kansas, and Mexico are home to the Checkered Garter Snake. This snake species typically has a vivid vertebral stripe on a tan or olive background. In contrast to the usual stripes of many Garters on this list, checkered Garters have a checkerboard pattern of light and dark marks. Many species of “checkered” animals feature similar black “eyebrow” stripes.

A huge portion of the central United States and southern Canada are home to the Plains Garter Snake’s expansive territory. Several other snakes, including the Common, Butler’s, and Black-Necked Garter Snake, share visual similarities with this one.

The vertebrae of a Plains Garter are a striking cream to golden yellow-orange stripe. Their sides might be completely black or feature a pattern of darker spots on a white, olive green, or even grey background. Rarely, you’ll find someone with a redder undertone.

It is possible to find black-necked garter snakes in the states of Texas, New Mexico, and even a small section of Colorado. The black stripes down the side of their necks make these snakes easy to detect. The back of this species is marked by a brilliant yellow to orange stripe. Their sides can have a variety of patterns, but yellow blotches are a common one. When the cream spots on certain people’s skin spread, it makes them look striped.

Commonly known as “Chicago Garter Snakes,” these reptiles can be found in Illinois, Indiana, and Wisconsin around the Windy City. The range of both the Eastern garter snake and this species overlap. This snake may easily be mistaken for a Common Garter merely by looking at it. They come in various tones of black, grey, olive, and tan with thin stripes of white or yellow running lengthwise. In a matter of seconds, you’ll be able to see that this species has a pair of black bars running vertically across its neck. The average length of an adult Chicago species is three feet.

An Attempt to Define New Mexico Only in a tiny region of New Mexico can you find garter snakes. In the wild, encounters with them are rare because of their limited distribution. Similar to other Garter Snakes, these snakes feature a yellow to white vertebral stripe and two longitudinal stripes. The standard brown, olive, grey, or black serves as their foundation. The spaces between their scales can occasionally be crimson.

The Santa Cruz garter snake is also known as the aquatic garter snake. The Santa Cruz Mountains in California are the only place this subspecies calls home. They can frequently be seen near California’s many bodies of water. Santa Cruz snakes, a subspecies of Garter snakes, are easily identifiable by their characteristic color pattern. Grayish in appearance, with darker spots, these snakes are. There is a broad stripe along their back that might be white, yellow, or orange. Santa Cruz garters are the largest of the snakes here. They can attain a maximum length of almost 40 inches. 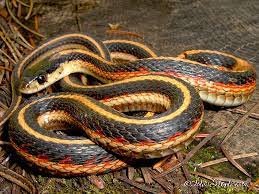 It’s not uncommon to spot a Valley Garter Snake in any of these places: wooded or wet areas, scrubby areas, open fields, by the coast, or even on rocky terrain. In addition to being common in metropolitan settings, they have adapted well to living among humans. You can find these garter snakes in the western United States hiding down under rocks, logs, and other objects to keep warm. Their winter behavior entails a period of dormancy, during which they huddle together below the freezing point. Burrows of mammals and crayfish, cracks in rocks, ant mounds, and even man-made areas like foundations and cisterns will all be used.

The appearance of a Butler’s Garter Snake is quite generic. In contrast to its mostly dark brown or black body, this species is distinguished by three white stripes that run lengthwise. Stripes are arranged as follows: one runs down the middle of the back, while the other two run along either side of the rib cage. Their keeled scales make a rough surface. You can encounter a Butler’s snake in the states of Wisconsin, Michigan, Indiana, and Ohio.

Narrow-headed garter snakes are endemic to a tiny region of central Arizona and New Mexico’s mountainous regions. In Arizona, it is against the law to kill, harass, or collect any of the state’s protected snake species. Narrow-headed water snakes are another name for these reptiles. Their slender, pointed head is a distinguishing feature, setting them apart from the majority of other water snakes. As such, this is one of the two distinguishing characteristics of the Narrow-Headed Garter Snake. They also lack the distinguishing feature of longitudinal stripes.