Although all three bluebird species are known to migrate, their regional migration patterns vary. The mountain variety of the bluebird can be found in the farthest northern latitudes and is therefore the most reliable migrant. Both the Eastern and Western bluebirds only migrate seasonally. They may live there permanently in the warmer parts of their ranges. 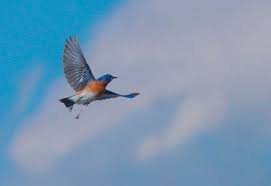 Whether or not bluebird populations move is dependent on a number of factors, including the location of the population, the severity of winters in that area, and the availability of food. Throughout this post, we shall talk about these factors extensively. If you’re curious about bluebird migration in your area, keep reading!

The bulk of bluebirds leave Pennsylvania in the fall and return in early March. 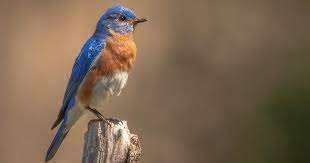 For those interested in birds, it’s worth noting that there are three distinct species of bluebirds.

Why do bluebirds migrate?

The migration patterns of the three species of bluebird are related to seasonal changes in food sources and temperatures during the winter. The birds will migrate south from their northern nesting sites to avoid the severe winters of the highlands and Great Plains. Bluebirds will stay in or near their nesting areas provided food is adequate and winters are mild. 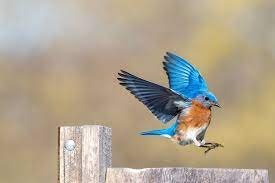 The Eastern bluebird is only partially migratory, therefore it stays put in some areas like the Northeast. When natural or domesticated food supplies are plentiful, they are more likely to stay all year. If the birds don’t migrate, they save a lot of energy and have a better chance of survival.

This also applies to Western bluebirds. This species doesn’t have to go south in search of warmer weather, with the exception of the populations that make their homes at higher altitudes in the Rocky and Cascade mountain ranges. However, mountain bluebirds cannot remain in the Arctic or Andean breeding sites year-round. 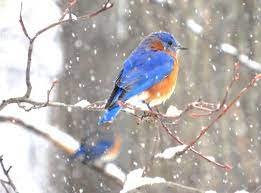 There are some Eastern Bluebirds that migrate, but not all of them. The Eastern Bluebird’s present nesting locations have a significant impact on the bird’s migrating patterns. Those that live in locations with moderate winters and an abundance of food, such as berries, tend to remain there.

Those who live in regions with harsher winters and less available food travel south for the winter, then return in the spring to reproduce. In spite of the fact that some bluebirds make an annual migration from the north to the south, the vast majority of the species stays put.

The range of the Western Bluebird extends from the Pacific Northwest to the lower portions of Canada, the United States, and finally the Southwestern United States and Mexico. The Western Bluebird’s food is similar to that of the other bluebird species, but it differs slightly from that of its eastern counterparts. Hundreds of Western Bluebirds flock to juniper berry patches in their territory every summer.

Southern populations of the Western Bluebird rarely migrate northward. Northern species travel south over the winter, returning in the spring to reproduce. They’re going to hang out up north till late autumn. 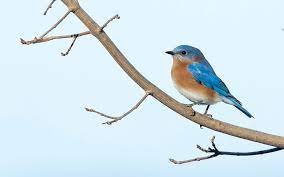 The Mountain Bluebird, among bluebirds, has the largest known range. They can be found all the way up in Alaska and all the way down in the southern part of Mexico. Their habitat is the Western United States, and they rarely go to other parts of the country.

Nesting boxes are great, but they also do well in recently burned regions. Connections between prairie and woodland are ideal habitats for them. The Mountain Bluebirds that inhabit the central western states of Colorado, Nevada, and California do not migrate and nest in the same location every year. The rest migrate north to breed in the spring.

How far do bluebirds migrate? 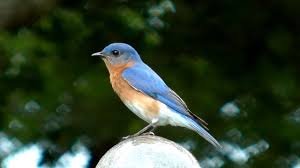 A bluebird’s migration distance is relative to its point of departure. It’s possible that birds living on the southeastern or western edges of warmer regions don’t travel more than a few hundred kilometers each way during migration. Northern populations, however, may travel more than 2,000 miles south from Canada to Texas or Mexico in search of warmer climates.

Do bluebirds migrate in flocks?

Bluebirds of all three subspecies—the Eastern, Western, and Mountain—migrate together. Although these flocks rarely exceed a few dozen bluebirds, hundreds have been known to gather at one time. Most of the time, these flocks stick together in the wintering grounds and then break apart on the way back to the north.

Where Do Bluebirds Spend The Night (Roost) During Migration? 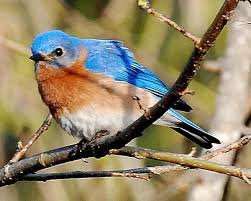 The eastern bluebird, like other cavity-nesting birds like woodpeckers, prefers to build its nest inside a natural or artificial hole in a tree or building. As an additional option, an eastern bluebird may choose to construct its home — a cavity-nest or box — in a woodpecker’s or another cavity-nesting bird’s previously vacated nesting hole. In areas such as parks, orchards, pastures, and meadows, bluebirds will often roost in a tree nest or nesting box. In the winter, bluebirds migrate south to avoid the cold. When you can’t be at home, you don’t start living on the streets; you book a hotel room or an apartment. Because bluebirds don’t change their mind about the kind of environment they prefer, it’s assumed that even during migration, they’ll continue to make their homes in artificial nests fashioned from tree cavities or man-made boxes.

Although bluebird roosting locations are unknown, it is commonly noted that migrating bluebirds seek shelter in thickets or other sites with an abundance of resources and food. Although roosting birds often congregate, this species is frequently discovered alone in a nest or box. They make their homes in preexisting holes, artificial nesting boxes, or holes drilled into trees by woodpeckers and other cavity-nesting birds. Neither their intelligence nor their access to maps are on par with that of humans, thus they aren’t always sure of their whereabouts. If a bluebird finds an empty cavity, it will use it as a nesting spot until it decides to relocate. When the seasons change, bluebirds typically return to their wintering grounds and residential territories, but since other birds have already occupied their holes, the bluebirds must instead seek out abandoned cavities to use as their own.

They currently hang out under a tree until that time comes. Bluebirds live in colonies, and other species, such as titmice, house sparrows, tree swallows, and European starlings, compete with them for available nesting cavities and nesting boxes. Few details about a bluebird’s roosting behavior are known, but we do know that in the winter, this bird switches its diet from insects to berries. During the winter months, you can find a wide variety of berries, including juniper, holly, sumac, berry, heck, and dogwood, but insects are few because most of them hibernate during the colder months.

Where do bluebirds go in the winter? 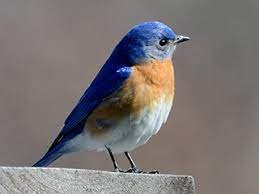 North American bluebirds head south for the winter. Bluebirds of the eastern subspecies that winter in southern Canada and the northern United States typically fly south to Texas or the southeastern United States in the spring. Many mountain bluebirds spend the winter months in the southwest and lowland areas of Wyoming, Nebraska, and Kansas, rather than in the Rocky Mountains themselves. Western bluebirds that breed at higher altitudes often make their way to the Pacific Coast and Southwest.

To put it simply, mountain bluebirds travel great distances to breed and winter elsewhere. Their home territory extends from the Arctic to the heart of Mexico. During the winter, Alaskan and Northern Rockies bluebirds will fly as far south as Mexico to breed. However, many of these communities only make the trek to warmer climes like Wyoming, Colorado, Kansas, or Nebraska when the temperature drops. 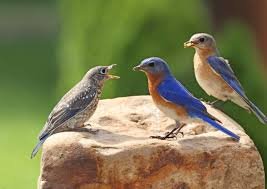 During migration, tens of thousands of bluebirds can congregate in a single Southern region. Both migratory and resident birds are included here. As much as double the local population may migrate in. It’s not consistent when bluebirds leave their northern breeding grounds. It is widely held that the weather determines the timing of the migration, but in reality, it can occur at any time between September and early December. The migration of northern bluebirds is at its height in October. Bluebirds typically migrate in smaller groups, but there have been reports of hundreds-strong flocks. They flock together, with the younger birds following the females and vice versa, and both sexes flying together. These flocks travel to their wintering grounds as unified families. There are a lot of families that return together, but that’s not always the case. Unlike most songbirds, these migratory birds prefer daytime flights. Using trees and fields as waypoints, they skirt the outsides of areas rather than going straight through them. It is the males who make the journey ahead of the females and arrive at the wintering grounds first. Before the ladies and young birds arrive, they scout potential nesting and feeding locations. Although some bluebirds return to their mating territories as late as late February, most do so around mid-May. About a third to half of bluebirds use the same nesting site year after year.