One of the most recognizable bird calls is that of the melancholy Mourning Dove. This is one of our most widespread birds, found across the continent from the southern tip of Canada to the center of Mexico. It is likely that the clearing of the forest caused by European settlement of the continent aided in the growth of this species. It also aids itself by reproducing at an impressive rate; in tropical regions, Mourning Doves can have as many as six broods every year.
During the mating season, mourning doves can be found as far north as southern Canada, and in the winter, they migrate to southern Mexico. This dove is a mostly year-round resident of the areas between those two ranges.

Due to the wide variety of climates and other conditions that are favorable for raising young, mourning doves can nest in a wide variety of locations. In the east, you’ll find them in mixed woods, in the middle and southwest, they’ll be in grassland and scrub, and in the west, they’ll be in evergreen forests. In most cases, nests are placed in trees, bushes, ledges, or even on the ground.

These charming birds may be establishing a nest in your neighborhood. Read on if you’re curious about the nesting habits of mourning doves and would like to know when and how you might be able to lure a pair to your backyard.

Patterns of breeding for the Mourning Dove 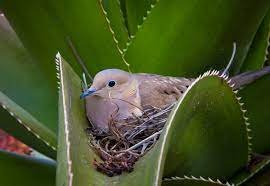 The male Mourning Dove gathers the nesting materials (such as twigs, grass, and pine needles) and brings them to the nesting female, who then stays on the nest while she builds it. You can find these nests anywhere, from trees to hanging plants.

The female lays two white eggs in the nest, which are subsequently incubated for 14 days by both the male and female. Young Mourning Doves are ready to leave the nest around 15 days after hatching.

Where can you find mourning dove nests?

Typically, mourning doves build their nests in tree cavities, but they may use bushes, vines, manmade structures, and even the ground (when suitable trees and shrubs are absent). Nest heights can range from near the ground to well over 200 feet in the air. 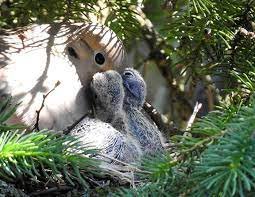 Doves seem to like nesting in the cover of conifers towards the beginning of the nesting season. Once the deciduous trees begin to leaf out, though, they are just as likely to select oaks and cottonwoods as nesting places.

Mourning doves are common, yet their nesting preferences and preferred environments are extremely diverse. Nonetheless, forest and grassland margins are typically their major nesting environment. They avoid places like thick inner forests where there is no chance of finding a nesting spot. These birds frequently make their nests in man-made structures such as derelict buildings, gutters, and stationary machinery.

In what seasons do mourning doves start laying their eggs?

Mourning doves nest at different times of the year depending on where they live. In more temperate regions, nesting season often begins in late February or early March and continues through October. Seasonal changes are typically pushed back by a couple of months in the north due to the lower temperatures.

How are the nests of mourning doves constructed? 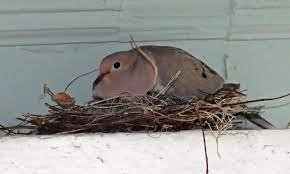 The nest-building process for mourning doves begins with the male scouting out suitable nesting locations and luring in the female with a nest-soliciting call. After settling on a location, the female directs the man in gathering the necessary materials for the bowl’s construction. Tiny branches, pine needles, and stems are all acceptable components of a nest. The majority of the building takes place between 8 am and 4 pm on weekdays.

Do mourning doves re-use the same nesting site every year?

If a mourning dove raises a successful brood in a particular nesting location, it will likely return to that location in subsequent years. These birds are notorious for nesting in the same place year after year, sometimes producing as many as five broods in a single year! 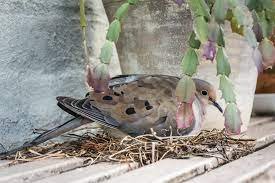 Usually builds its nest high in a tree or vine with plenty of thick foliage, such as an evergreen, an orchard tree, mesquite, cottonwood, or a vine. Especially in the Western Hemisphere, it’s not uncommon for their nests to be on the ground. Mourning Doves aren’t troubled by human presence, thus it’s not uncommon for them to build nests in unusual places like gutters, eaves, or defunct machinery.

Description of the nest

Unlined and providing minimal insulation for the young, this assemblage of pine needles, twigs, and grass stems is fragile at best. Over the course of two to four days, the male brings twigs to the female and passes them to her while standing on her back; the female then weaves them into a nest that measures about eight inches across. It is not uncommon for mourning doves to repurpose nests from other birds.

Anything between one and six litter

Size of an Egg

Beginning of the Flight Into Adulthood

Ailments Present at the Time of Hatching

Incapable of keeping warm without the assistance of adults; eyes closed; down covering only the extremities; unable to hold head up.

Commonly forages on the ground, but will perch to harvest seeds from plants. To the point where they’ll even eat on the ground beneath hanging feeders, these birds clearly enjoy human hospitality. Fast eater that loads up on seeds before taking a nap to digest them. Consumes grit (small gravel) on a regular basis to break down tough seeds. 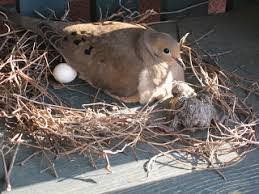 White. Both parents are responsible for incubation, which lasts for around 14 days. Two parents provide “pigeon milk” to their young. About 15 days after hatching, the young leave the nest but remain close by for another week or two to continue receiving food. In the south, a single breeding couple may raise multiple broods throughout the year.

Mourning Doves are mostly ground feeders. Instead of scratching the soil, they either peck at it or push aside any trash they find. The males of the species are very protective of their favored “cooing perches.” As a kind of pair bonding, members of a pair will preen each other by gently nibbling at the back of the neck. There will come a time when the two will be able to grab beaks and move their heads up and down in tandem as a sign of affection.

Some species of mourning dove prefer to nest in platform nest boxes. The platform can be set up in a location with plenty of trees, bushes, and hanging plants for concealment. Doves may occasionally nest on the ground, but your best bet is to hang the nest box at least ten to fifteen feet off the ground to keep predators away from the nest and its contents.