With a population of over 6,000,000 breeding pairs, the common European blackbird is one of the most prolific bird species in the United Kingdom. Its binomial name, Turdus merula, comes from the Latin words for “thrush” and “Blackbird,” respectively. As a group, thrushes (which number roughly 65 different species) are distinguished by their sharply pointed wings, rounded heads, and distinctive songs. The Island Thrush of Southeast Asia appears to be the ancestor of the common Blackbird found in the United Kingdom. 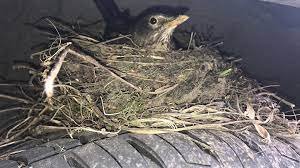 Most people picture a Blackbird as the strikingly dark bird that frequently visits our gardens to dine on the ground, complete with a bright yellow beak and a ring of the same colour around each eye. The juvenile and female variants, on the other hand, seem very different from the adult males, with their vivid reddish-brown plumage and dark-brown striped beak.

Most Blackbirds, especially juveniles, appear to move quickly and hop about the ground as they search for food in the dirt, leaves, and shrubbery. Blackbirds are social birds that are not afraid of people, yet you won’t see one perching on your hand as the ubiquitous Robin does. 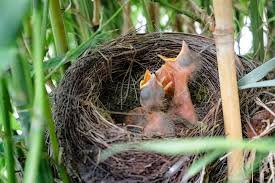 The Brewer’s blackbird is found in the western half of North America, from the coast of California to the top of the Rocky Mountains, at elevations as low as 8,000 feet. They can be found in a wide range of both natural and artificial environments, including grasslands, marshes, meadows, forests, coastal scrub, chaparral, and sagebrush. Lawns, golf courses, parks, city streets, farmland, and power line rights-of-way are all examples.

Behaviors associated with nesting and breeding in blackbirds

Members of the thrush family, like blackbirds, are notoriously territorial. In the event that other blackbirds invade their mating region, they act swiftly to evict the intruders.
Only the female of the species constructs the large nest, which is made of a variety of plant materials and reinforced with mud. In rare cases, an open-fronted nest box may be used if it is properly camouflaged, but typically the position is in fairly thick foliage like a hedgerow (perhaps in a wall climbing plant). The nesting season begins in March, and the birds will often have two or three broods by the end of the summer. However, a fourth brood is sometimes tried when the young are still in the nest as late as August. Cold, dry springs often delay or impair the first brood, and hot, dry summers preclude a third or fourth brood. The primary issue in both cases is the scarcity of earthworms in the top few inches of the soil. 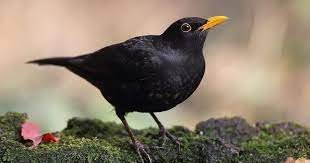 The female is solely responsible for incubating the eggs (there are often three to five of them) and caring for the chicks once they hatch. The male Blackbird, on the other hand, does all of the feeding of the young, both while they are still in the nest and after they have fledged.

Blackbird chicks can’t fly for another week as so after they leave the nest, so they flutter around in the neighboring bushes for protection while they wait to be fed by their parents. Even though many birds don’t make it through this perilous period, the evolved adaptation of fledging early can be seen as beneficial overall protection against predators because it disperses the young throughout the area. The chicks are able to fly a week after leaving the nest, however, they may not do so brilliantly at first. 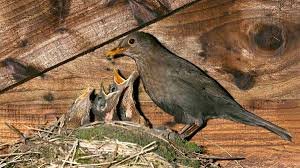 Once the young birds have flown from the nest, the female stops feeding them, leaving the male to do so for another two weeks or more. The female terminates activity to begin laying the next batch of eggs.

In limited areas, blackbirds are quite territorial. While not nearly as combative as Robins, they are unyielding in their convictions. If a Blackbird finds a good source of food outside of its territory, it is not likely to stay there. Most birds leave their territories after raising their last brood, heading out to the countryside and other areas with an abundance of food.
Even though blackbirds live in the UK year-round, they are much more visible during the winter, breeding, and fledging seasons. During the winter, Scandinavian Blackbirds will swell the native population due to the milder weather, and then they will return to their northern European breeding grounds in early spring. 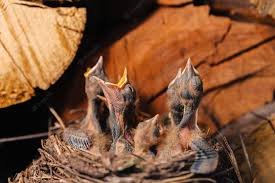 Blackbirds are mostly solitary birds that rarely interact with members of their own species outside of the nesting and fledging phases of their lives. Outside of the breeding season, birds are more tolerant of one another; in the winter, groups of up to twenty birds have been observed feeding, flying, and even sleeping together. But they stay far apart from one another, forming an uneasy union for the sake of safety in numbers.
It’s interesting to note that even after the young Blackbirds have left the nest and become independent, it usually takes another three weeks before the adult male will allow them to leave his area. The offspring will eventually leave the breeding grounds of their own volition.
Once a male Blackbird has established its territory during its first winter, it will never leave it again for any reason other than to reproduce. This is true even though the bird will travel great distances during the winter months in quest of food. During the winter months, many Blackbirds often arrive in gardens and appear to be in nearly constant combat with one another due to their strong territorial instinct and intolerance of others of the same species (even outside the territory) when feeding. However, this competition can be reduced in larger gardens by dispersing the food sources (such as sunflower hearts) in different locations. This creates what the Blackbirds perceive to be a “safe distance,” and tolerance between the two groups becomes apparent.