A blue jay is undeniably one of the most stunning and vibrant birds around. Their vibrant blue plumage sets them apart from all other bird species. While many appreciate the blue jay’s ability to provide color to their houses, there are many who view the birds with contempt and refer to them as “bullies.” It’s possible they want to prevent a blue jay from settling in. In this post, we’re taking a deeper look at the blue jay’s nesting behaviors, and learning a little more about this fascinating bird.

Whatever side you’re on, that doesn’t change the fact that this bird is still one of the most sought after by birdkeepers and will continue to be so for a very long time. The blue jay is a fan favorite among aviculturists thanks to its pleasant, even song.
Blue jays are unique among birds because of their high intelligence and close-knit families. 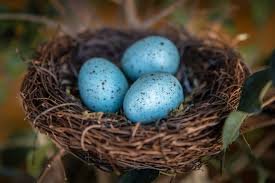 Most blue jays out there measure between 9-12 inches in length, have a wingspan spanning around 13.4 -16.9 inches, and generally weigh between 70-100g. Blue jays are commonly defined by their grayish-blue crown and chest, bright blue wings and tails, and black bands.

If you’re wanting to spot blue jays and do not want to confuse them with other birds, bear in mind that they have a unique necklace of black feathers around their throats which goes around their heads. These birds are easily visible over the deciduous woodlands east of the Rockies.

Also, it’s vital to observe that the upper part bodies of blue jays are often bluish-gray, and they are brightest around their rumps. The lower abdomen and breasts of blue jays are white, while their eyes and feet are black. Blue jays have some of the most fascinating nesting behaviors of any bird, despite the fact that just looking at them would be fascinating enough. 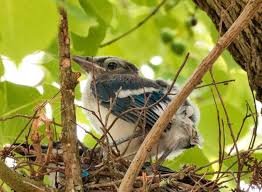 Blue jays often construct their nests 10-25 feet off the ground, in the crook or thick outer branches of a deciduous or coniferous tree. Both the male and female help with nest construction, albeit the former is typically more involved than the latter. As a result, birds often have trouble removing the twigs from living trees that are used to construct the nest’s exterior layer. Rootlets from newly dug ditches, freshly buried bodies, and downed trees can attract birds from large distances. Blue Jay pairs start looking for a suitable nesting site as early as February, with the goal of having everything in place before the female starts laying eggs in March.
What is the nest made of?
Rootlets line the inside of an open cup made of twigs, grass, and sometimes mud.
Toggle Size
2-7 eggs
Total Clutches
1 brood
Egg Size
1.0-1.3 in (2.5-3.3 cm)
Size of an Egg
0.7-0.9 in (1.8-2.2 cm)
Duration of the Incubation Phase
17-18 days
When Babies Are Young?
17-21 days
Definition of an Egg
Brownish or bluish dots on a light brown or bluish background.
Hatching Health
With nothing on but the clothes on her back, her eyes closed, and a bright red line around her mouth, she seems completely helpless.

Location of a blue jay’s nest 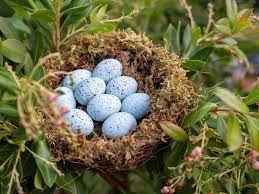 One of their top priorities is to locate a safe haven for the kids. The blue beauties need shelter from both natural and man-made threats if they are to survive. This can be difficult because Blue Jays have aerial (osprey and hawks) and terrestrial (cats, dogs, and cats) predators (snakes and raccoons).

Typically, blue jays will pick a tall tree or bush, whether it be deciduous or coniferous. Nests can be found ranging from 5 to 50 feet above the ground. Most birdwatching takes place between 10 and 25 feet in the air, per the Cornell Lab of Ornithology. The nest is built far from the trunk, in the safety of the inner branches or the horizontal fork of a limb. Blue Jay nests are ungainly open-cup structures made of twigs, bark, and other plant debris. A lot of times they’ll “cement” the nest with mud to make it even more stable.

Rootlet, moss and even soft man-made materials like yarn are all used to line the nest for maximum comfort and protection. When money is tight, the couple may resort to using fast food packaging or other unconventional items to supplement the nest. The Blue Jay pair will work together to construct the nest. But often the male does the shopping and the female does most of the nest building. The result is a cozy, safe, and secure place for Blue Jay parents to raise their young.

Where do Blue Jays get their nesting material? 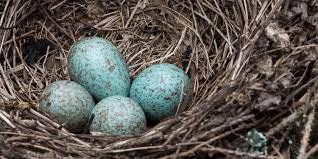 The nest of a blue jay is built by both male and female birds. However, women are more likely to take on construction tasks, while men are responsible for more gatherings. Once the majority of the nesting materials have been gathered, the female will begin to construct the nest and mold it to her taste while the male brings her twigs and other bits of detritus to use. By pressing against the inner walls, females can form the nest cup.

For what time period do Blue Jays typically nest?

The duration of a nest built by a blue jay might vary. The time of year between spring and summer is commonly considered the nesting season. However, the exact time when birds begin to sing varies from place to place. Southern jays might start their breeding season before their northern counterparts. It can take jays a couple of months from the time they make their first nest until the young depart the nest.
Blue jays will usually stop nesting for the year in July, but if their first brood doesn’t make it, they will try again. Two broods in a season are unusual but not unheard of unless this happens.

Will a pair of Blue Jays always nest in the same tree?

Most pairs of jays will construct a brand-new nest each year. But occasionally blue jays will use previously used nests again. If the nest is safe and convenient, they may return there year after year. Blue jays will clean up and redecorate an old nest if they decide to reuse it. Mites can be avoided if the nest is kept clean. 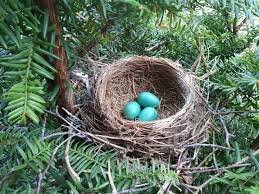 Although Blue Jays are numerous, the North American Breeding Bird Survey reports that their numbers have been decreasing at a rate of around 0.6% each year, amounting to a cumulative decline of about 27% between 1966 and 2019. As reported by Partners in Flight, the global breeding population is at 17 million. The Continental Concern Score for this species is 9, which indicates it is not very vulnerable and hence poses little threat to biodiversity. Animal attacks, especially from felines and canines, are the leading cause of human mortality.