Incredible birds of prey, peregrine falcons are truly unique. Despite their diminutive size, they are capable of taking down prey that is several times their body weight. Among birds, peregrines are among the fastest fliers, with speeds of up to 200 miles per hour recorded. This species of bird is renowned for its hunting prowess because of its remarkable speed and agility. They have the ability to hunt both on the ground and in the air.
The prey of a peregrine falcon can range from little songbirds to large geese. The peregrine falcon enjoys eating pigeons and ducks. They sometimes even bring in larger prey, such as bats or rats. Insects and, even less frequently, carrion are two of the few things these birds will consume. 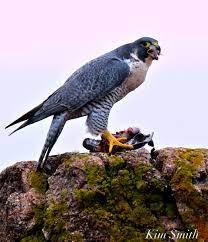 In the wild, a peregrine falcon’s food can change drastically. To some extent, a falcon’s diet is determined by its environment, its geographic location, and the time of year. In the next article, we’ll delve even further into these specifics.

The peregrine falcon is a widespread species. They can be spotted anywhere but Antarctica. Peregrine falcons may fly enormous distances, sometimes between continents, to get from their wintering grounds to their breeding sites. North American peregrine falcons can be migratory or non-migratory. Alaska, the Midwest, the Northeast, the Southwest, and the Western Coast all have residents that stay put throughout the year. Other peregrine falcons migrate from South America and the Gulf Coast to the Alaskan tundra each year. With their global range, peregrine falcons can be found in a variety of settings, including mountains, forests, towns, valleys, deserts, and coastlines.

Peregrine falcons eat largely other birds. As many as 450 species of North American flora and fauna have been identified as prey, and the number could reach as high as 2,000 globally. Birds as huge as sandhill cranes, and as small as hummingbirds, have been devoured by falcons. Shorebirds, ducks, grebes, gulls, pigeons, and songbirds are among their common prey items. Bats are another favorite food of peregrine falcons, and they have even been seen stealing fish and rodents from other raptors.

What does the peregrine falcon like to eat the most? 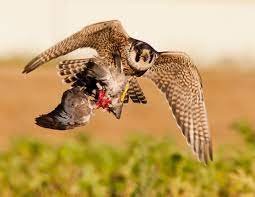 Here are the things that peregrine falcon likes to eat the most:

The most typical routines of a peregrine falcon are:

The typical habitat for this species is around rivers and coastlines in the mountains. On the other hand, peregrine falcons have been increasing in number in cities in recent years. 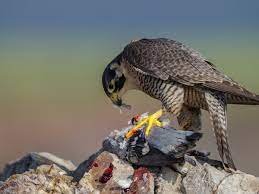 Crashing into its prey is the only way for the bird to pause its descent during a dive. Experts say that peregrine falcons can adjust their breathing to avoid air pressure injuries.

The bird’s rapid speed is, unfortunately, a major disadvantage. They consequently frequently run into things that have been set up by humans and cause collisions. In addition, owls and other hawks frequently target this species for hunting.

Falcons typically build their nests on cliff faces that are at least 1,300 feet high. Evidence of them can be found all the way up to the Grand Canyon’s edge. Typically, males will select a few potential nesting sites and let the female make the final decision. Most females lay between two and five eggs in a clutch, and that time of incubation lasts for about 29 to 32 days. The average lifespan of a peregrine falcon is 15 years, however some have been known to live even longer.

In the winter, peregrine falcons mostly subsist on other birds including songbirds, pigeons, and waterfowl. The falcon’s region determines the species it will be hunting.

The Gulf of Alaska and the Pacific Coast, down to Mexico in the south, is home to these birds all year round. They migrate south during the winter to the Gulf of Mexico and the southern Atlantic coast. During the colder months, these falcons will rely heavily on gulls and other shorebirds for food. 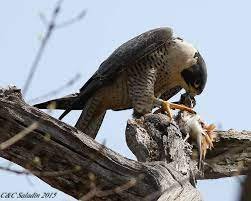 Birds of prey that spend the winter in the interior of Mexico and South America, such as the peregrine falcon, eat a wide variety of perching birds and waterfowl.

In the summer, the diet of a peregrine falcon changes to include a wider variety of foods. What species of birds eat, in particular, varies greatly depending on their habitat and location. Birds make up the bulk of most summertime diets, with small amounts of mammals, fish, reptiles, and insects rounding things off.

It is common for peregrines to spend the summer months in Alaska and other North American tundra locations where they can raise their young. There, they frequently consume golden plovers, common snipes, longspurs, rock ptarmigans, and snow buntings. They also eat ground squirrels and lemmings, among other small mammals.

Murrelets, gulls, grebes, the black storm-petrel, and mourning doves are typical prey of the peregrine falcon in its coastal settings. The fishing bat is also a popular item on the menu. The peregrine falcon prefers pigeons and doves, as well as other common peregrine falcons often hunt from a perched position or while flying, in inland habitats and urban areas. Trees, telephone poles, cliff faces, and rocky outcrops are common perches. In order to observe other birds, peregrines prefer perches that look out over open areas. Waterfowl, such as ducks, loons, and geese, are occasionally the targets of their foot-based hunting. 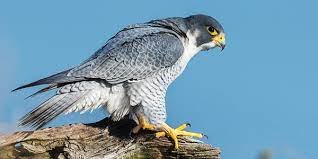 Whenever possible, peregrine falcons try to get a meal. Many of them will eat as much as two medium-sized perching birds (such as blackbirds) every day. Generally speaking, this is equivalent to about 2 1/2 ounces of beef.

The peregrine falcon’s reputation for swiftness precedes it. When they dive, they are nothing short of stunning. Several characteristics of this animal make it an excellent predator. This is one reason among many why falconers are so fond of them.

They put these abilities on full show during courtship. There is lifelong commitment between partners, and annual nest visits.