Given that bees have stingers, it may come as a surprise that any bird would favor eating these as part of its diet. So let’s get to it, what kind of birds eat bees? There are many different types of birds that do eat bees – some of which are bee-eating specialists and others that are opportunists. For example, species such as bee-eaters, summer tanagers, and scarlet tanagers will consume them as a large part of their diet. In contrast, other species such as the honey buzzard or purple martin will only eat them occasionally as either larvae or adult insects. 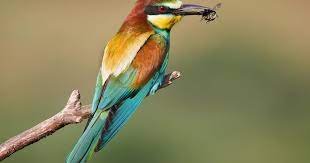 There’s actually a whole species of bee-eating birds, most of which are found in Africa and Asia. These birds come from the family called Meropidae, which consists of three genera and around 26 species.

Bee-eaters are usually categorized by their colorful plumage and long tail feathers. They also have a slender body and a long, down-turned beak. Bee-eaters are known to feed on flying insects; this includes all types, such as flies, bees, and wasps. 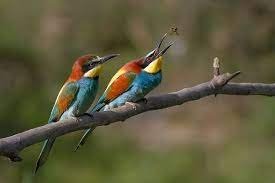 These omnivores occasionally eat flying insects. However, these are difficult to catch and therefore birds tend to get their protein requirements from other slow-moving insects. This is why birds generally do not attack bees nor destroy their hives. Certain birds like kingfishers have specialized skills. They are fast and love to eat bees and wasps. Kingfishers have great accuracy even at high speed and are therefore among the few birds who choose to eat bees over slower insects. 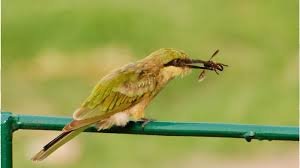 Bee-eaters are aptly named birds who prefer a diet of bees and wasps. They prefer the plump honey bees and bumble bees, but they also eat wasps, hornets, dragonflies, and other flying insects. Their instincts are so honed that they won’t attack a bee sitting beside them on a limb; they only go for insects that are flying. Bee-eaters are found mostly in Africa, Asia, southern Europe, and Australia. In North and South America, the summer tanager feeds primarily on bees and wasps, grabbing other flying insects when a bee isn’t readily available.

Other birds who eat bees do so only on occasion, not as a main diet staple. These include kingbirds, swifts, mockingbirds, thrushes, and martins. In most cases, these birds grab bees off the ground, not in flight. Woodpeckers can single in on a hive and enjoy the protein boost.

What Other Birds Eat? 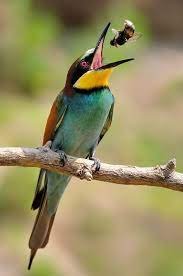 Most birds won’t turn down an easy meal of a dead or dying bee that has fallen to the ground because they prefer slow-moving meals. Birds tend to hunt worms, caterpillars, beetles, grubs, and spiders. Being omnivores, they balance out their diets with seeds and grains, enjoying food such as black-oil sunflower seeds, white proso millet, peanuts, and cracked corn — the primary ingredients in many bird seed mixes. Some also enjoy the fruit.

How do birds catch bees?

Another reason why not many birds consume bees as part of their diet is the skill required to catch them in the first place. Bees rarely fly in a straight line, and they can be speedy. So, not only do birds need to be agile enough, but they also need the ability to judge the required angle and speed to enable them to catch bees.

Most bee-eaters will use the same method when it comes to catching bees. They’ll either glide and catch the bee during flight, or swoop down and grab them from a branch. Once caught, they use their long, curved beaks to bash the bee’s head on a surface and then they remove the stinger and toxins before consuming the bee.

When Birds Eat Bees Do They Get Stung? 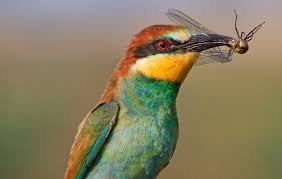 When alone, bees prefer to fly off quickly instead of stinging their predators. Even if a single bee or a small group of bees decide to attack the bird, the birds usually eat them and their plumage protects them from these stings.

What Types Of Birds Feed On Bees?

As we have already seen there are different types of bird species, each prefers a different diet constituent. A honey buzzard, on the other hand, prefers to consume larvae over slow-moving insects.

Other birds that sometimes eat bees 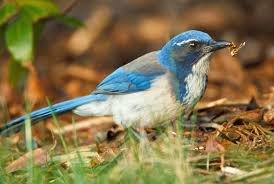 Birds are mostly omnivores, which means they consume plants, animals, and insects as part of their diets. In addition to the birds listed above, many other species will occasionally eat bees, such as northern cardinals, orioles, swifts, thrushes, woodpeckers, and mockingbirds. Woodpeckers can single out a beehive and will then eat the bees whenever the opportunity arises. However, these birds much prefer to eat slower-moving insects such as worms, caterpillars, and spiders as it takes less skill than trying to catch the fast-moving bee.

The birds that feed primarily on bees are bee-eaters. They come from the bird family called Meropidae, and there are around 26 different species. Bee-eaters are not common in America, they are mostly found in Africa, Southern Europe, and Asia. The reason why many birds avoid bees might be because they aren’t the easiest meal. It takes a few special skills to catch bees, not to mention avoiding the stinger. Bee-eaters know exactly what to do to successfully catch, kill, and clean out the venom, for a well-deserved meal.