The Atlantic puffin is one of the precious birds in Iceland and is a tourist attraction. Puffin got their name according to their appearance and features. These birds are regarded as the cutest bird to exist in the world. Atlantic puffin’s Latin name, Fratercula arctica, translates to “little brother of the north,” which may allude to the Atlantic puffin’s plumage resembling a friar’s robe.

What do Puffin Bird eat? 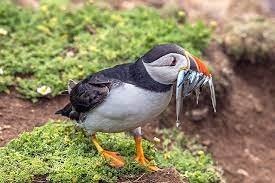 Adult puffins mostly eat small fish, such as sand eels, herring, hake, and capelin.  Puffin diets vary from colony to colony because of the variety of fish around the breeding islands.  During winter puffins may also eat crustaceans, but their preferred food is fish.  The young puffins are usually fed fish by their parents.  Parents carry fish in their bills and either drop them on the burrow floor or pass them to the chick.  Parents usually feed the chick several times each day.

Where do you find puffins? 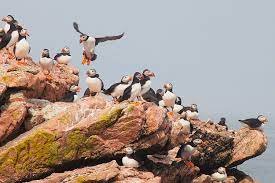 Puffins are resident in the UK around the coasts of Scotland and the Scottish Northern Isles. There are also small resident populations on the northeast coast of England. Summer visitors nest around the coasts of Northern Ireland, north and south Wales, Lundy Island, North Devon, and Cornwall, and the Scilly Isles. Visiting birds arrive from March onwards and depart in late August. Their nests are normally built in burrows which they excavate themselves.

The nesting sites are often on grassy slopes and cliff-top colonies overlooking the sea. If it is not possible to burrow due to the geology of the nesting site, pairs will often use fissures or cracks in the cliffs. During the winter, birds return to the Atlantic and spend their time at sea often floating in large flocks otherwise known as rafts. 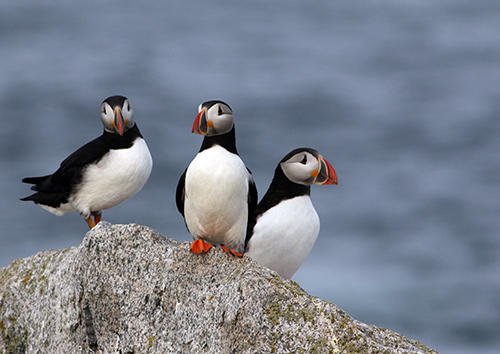 The Atlantic Puffin (formerly Common) lives in the North Atlantic and is readily separated from the similar Horned Puffin by the steel-blue triangle at the base of its beak. The Tufted Puffin is the largest and is characterized by long, straw-colored feathers that extend back from its crown during the mating season.

Although this Puffin differs noticeably in outward appearance from the other three species of puffin (which accounts for its misnaming), this sooty-brown bird is anatomically still a puffin. During the breeding season, a pale knob projects upward from the base of the upper mandible giving a Rhinoceros-like appearance to its otherwise more narrow and shallower bill. This puffin usually comes to land at night.

In spring and summer, thousands of puffins gather in colonies on the coasts and islands of the North Atlantic Ocean to breed. They dig their holes (or burrows) using their beaks and feet. They prefer to make their burrows on earth or between rocks on cliffs so predators cannot easily reach them. The burrows are up to one meter deep. 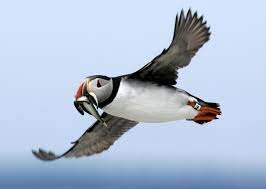 Puffins might resemble the black and white Antarctic birds, but they are not flightless. Despite their stout bodies and short wings, puffins can fly as fast as 55 mph, but not without some serious effort: They have to flap their wings 300 to 400 times per minute to stay aloft.

Puffins lead long lives for birds—often more than two decades. The oldest known puffin lived to be 36. The species’ maximum age is difficult to gauge because dated leg bands often corrode in the puffins’ salty habitat, or become illegible as the puffin’s nest in rocky environments. It’s hard to track which puffins were ever banded at all.

The puffin struggles to get in the air, beating its wings 300-400 times a minute just to stay in flight! They also have trouble landing, often crashing into the water or rolling onto the grass, tumbling into any other puffins that may be in their way. But one thing is clear: the cutest creatures are excellent swimmers. They use their wings to ‘fly’ underwater while using their feet to control direction. Puffins are incredible divers and can reach depths of 60 meters on their journeys to look for food.

They seem to have very conservative family values and usually pair up with the same partner as in previous years – some have been together 20 years! They raise their single chick (or puffling) throughout summer and return every year to the same burrow with the same mate.

These adorable and cute-looking birds spend most of their lives out at sea, resting on the waves when not swimming. Puffins feed them in Iceland. Puffins are carnivores and live off small fish such as herring, hake, and sand eels.

Why is a puffin called a puffin?

Puffins got their name because of their distinct appearance. Their downy feathers make them appear puffed. The nicknames “clowns of the sea” and “sea parrots” are appearance-based, as well. Both are references to the birds’ colorful facial markings and beaks.

What are their special features?

Its compact body, strong wings, and webbed feet help it dive and maneuver under the water. While the puffin is agile in the water, it is not as graceful in the air and on land! It often crashes and lands both on the water and on land.