Barn owls are the most popular species known for their white stark faces and haunting calls. They have distinct features of white heart-shaped faces and dark eyes. These are found widely everywhere all around the world. The barn owl is widely distributed in the northernmost limits and is generally spotted in open plains, farmlands, and low-lying woodlands. There are features and facts about these birds and here we will discuss them. 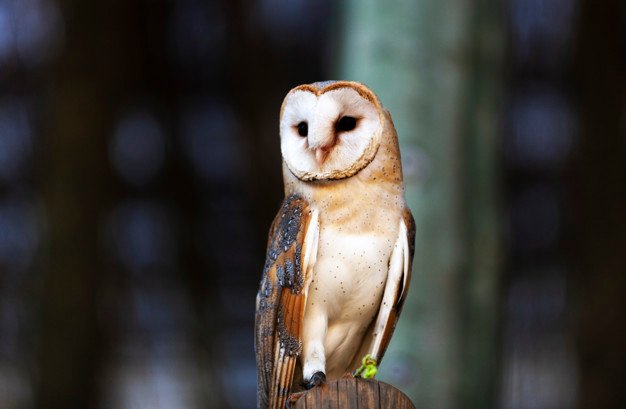 Barn owls are also known by their scientific name Tyto alba which means white owls. The word tyto is a Greek word for owl and alba means white. These owls are known for their bright white heart-shaped faces and can be identified easily. These birds don’t have ear tufts. These birds look dangerous because of their large and dark eyes. These nocturnal birds have a face framed by brown and grey feathers and have short and rounded wings. They have pale white breasts and in terms of female barn owls, those with spots are more likable in males.

Barn owls have a total length of 33-39cm and their wingspan is about 80-95cm long. These owls weigh around 400-600g. Male barn owls tend to be lighter and smaller than females in weight and size respectively. These birds have a lifespan of around 4 years. 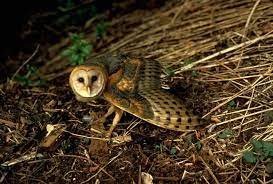 Barn owls are nocturnal and crepuscular. However, in Britain, they do on occasion hunt by day. They can also be seen at twilight on winter afternoons patrolling along hedgerows in search of prey. In-flight, the barn owl shows warm-buff flight and tail feathers with dark-brown barring. Their flight is slow and elegant and they appear long-necked and short-tailed. Feet dangle when hovering. The barn owl’s white face and underparts are what are most likely to be visible.

How does a Barn Owl breed? 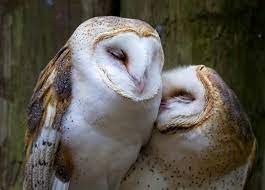 Barn owls breed in farmland with scattered crops, gardens, and sometimes villages next to open fields. They will nest in holes in trees or buildings, where females lay 2-7 smooth white eggs. The female will do all the incubation, while the male provides her and the young with food. They will usually pair for life, or for as long as both individuals survive

What is a group of Barn Owls called? 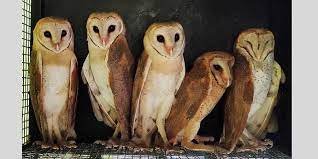 Known collective nouns for a group of Barn Owls are as follows:

a stable of barn owls

General collective nouns for a group of Owls may also be used:

These owls are nocturnal birds that primarily hunt at night. Their facial disks help sound make its way to their ear-holes, where they can better detect sounds. These owls swallow their prey whole and then regurgitate pellets after most of the animal has been digested. The size of these pellets can be up to 1.5 inches, and scientists use them to learn many facts about what the barn owl eats.