Turtles are fantastic pets since they are cute as a button, low maintenance, and more engaging than, say, a fish. However, there are times when many who like turtles wish that their humongous pets might somehow shrink back to their former, more manageable sizes (not that being big changes that, though). 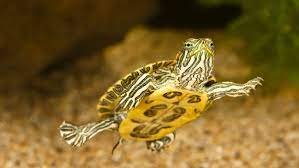 Pet Red Eared Slider turtles are a popular species of a turtle because of their popularity and the fact that they are native to North America. The red patches around their ears are what give these reptiles their distinctive “red-eared” moniker, though.

The European pond turtle, or Emys Orbicularis as it is known in Latin, is a friendly freshwater turtle species. These critters are extremely resilient and tolerant of bland omnivorous fare. 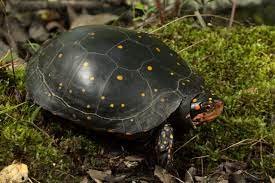 The southeastern United States and Canada are both good places to look for spotted turtles. In spite of their little (just 5 inches long), they make excellent pets because of their size-specific cuteness and curiosity. A spotted turtle is easily identified by the yellow-cream patches that cover its otherwise black or dark-brown body.

Unlike other kinds of aquatic turtles, these tiny creatures can’t entirely retract their lengthy necks into their shells. 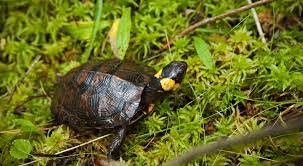 The bog turtle, or Glyptemys muhlenbergii, is another popular pet turtle in the USA. While native to the eastern United States, these little turtles thrive in captivity and frequently become tame, friendly pets.

North America is home to a small freshwater turtle known as the loggerhead musk turtle (Sternotherus minor). This species of turtle is well-known for its low maintenance requirements and the fact that some individuals when kept in captivity for an extended period of time, become extremely tame. 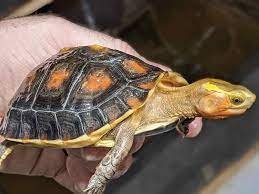 Central China, some of Japan, and Taiwan are all home to Chinese box turtle populations. These stunning semiaquatic turtles are easily identifiable by the bright yellow edges that run over their undersides. Their dark brown, extremely dome-shaped shells are accented by bright yellow stripes along their keels. 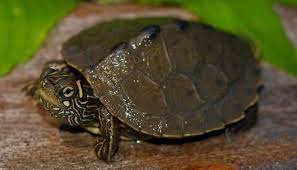 Graptemys ouachitensis, often known as the ouachita map turtle, is a tiny freshwater turtle endemic to the Mississippi River basin in North America. Because of their resilience and ability to adjust to captivity, they are frequently recommended as first turtles. 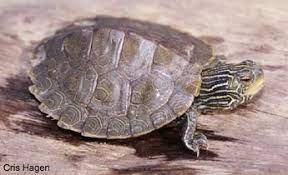 Sometimes referred to as “Common Maps,” northern Map Turtles are a subspecies of the Map Turtle. They’re more popular as pets than the Ouachita Map breed despite being just as low maintenance. The range of Northern Maps is exceptional all the way to eastern North America.

When it comes to Box turtles, the Coahuilan is the most vulnerable. Because of their limited distribution, they are only found in the Coahuila region of Mexico, specifically in the area around the city of Cuatro Cienegas. The Coahuilan Box turtle, in contrast to virtually all other Box turtles, spends nearly all of its time in the water. 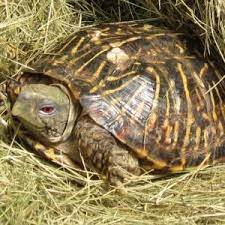 Large enclosures are required for eastern box turtles, although these turtles are surprisingly versatile. If housed indoors, they require a humid climate, a UVB basking lamp, a moist substrate, and a shallow pool of water. 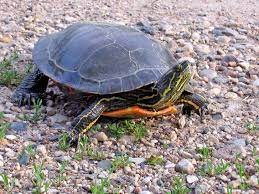 If you’re searching for a turtle with personality and style, a Western-painted turtle can be a good option. There have intricate designs on their shells. These aquatic turtles may not be very enormous, but they do require a large tank or outdoor space, a reliable water filtration system, and basking lights to keep them toasty.

The Mata Mata is one of the most unusual-looking of these species. Their unique design is a big draw for first-time pet owners. The ridges on their shells look like those of an alligator, and they can be a variety of bright colors, including red, brown, and green. 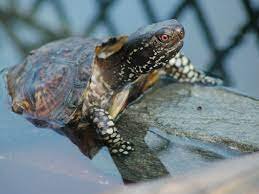 The Gulf Coast Box turtle, measuring up to 8.5 inches in length, is the largest of the Common Box turtle subspecies. They inhabit the estuaries, swamps, and brackish waters of the Gulf of Mexico. This species’ semi-aquatic lifestyle necessitates the presence of warm, humid conditions.

This species of turtle, known as the Ornate Box Turtle, is stunning to behold. Their dark brown or black shells are patterned with yellow to orange stripes, making them very recognisable. Throughout much of the central and western United States lives the Ornate Box turtle, the state reptile of Kansas. 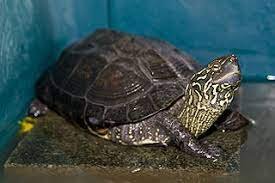 Reeve’s turtle is also called the Chinese Pong turtle by others. The people of China, Japan, and Taiwan love keeping these turtle species as pets. Lands with plenty of greenery and places to sun themselves are ideal habitats for reeve turtles, thus lakes, ponds, and slow-moving streams are where you’ll most likely find one.

In addition to China, Thailand, Japan, Korea, and Vietnam all have populations of the Chinese softshell turtle. Named for their comparatively pliable shells, these creatures are anything but hard-bodied. The softshell turtle, like the Mata Mata, is a very rare species.

Originally from the eastern United States, namely the state of Florida, is where you’ll find the most Florida Softshells. Caring for a soft-shelled turtle is pretty much the same regardless of species.
Smart, adorable, and loads of fun, these turtles are a must-have. They require a large body of water in which to swim and a relatively modest basking area, much like the Chinese Softshell.

Good news for those just starting out with turtles as pets! The spiny softshell turtle is a great choice for a pet if you want a long-lived animal that will provide you with the company for a good portion of your life. You may rest assured that your pet will be with you for a very long time because these wary turtles can survive for over 50 years in captivity! 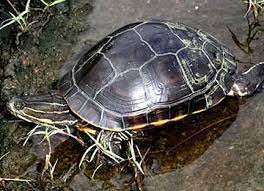 What a peculiar creature, the yellow mud turtle! Animals of this type are primarily carnivorous, however, they do occasionally indulge in a vegetarian feast of duckweed.
In what ways does this affect the prospects of people who want to buy one of these exotic animals as a pet? You may give them a variety of protein-rich foods, from earthworms and crickets to feeder fish, shrimp, and even beef hearts.

Semiaquatic freshwater Eastern River Cooters are widespread across the East and Midwest of the United States. It is not uncommon to spot them sunbathing on rocks or logs along the water’s edge. The fast-moving waters of lakes, rivers, and streams are perfect for these medium-sized turtles, which can also breathe underwater.

Species of the genus Cooter can be found all over the world, however, the Florida Red-bellied Cooter can only be found in Florida and some of Georgia. These medium-sized Cooters are easily identified by their bright red plastrons, which gradually fade as the birds reach maturity. Their shells are brown and domed, and they are striped with yellow.

The diamondback terrapin turtle is one of the most interesting marine reptiles. These creatures originated in the southern United States and thrive in hot and humid conditions. This implies their keepers should aim for a constant enclosure temperature of about 80 degrees Fahrenheit.

Another species of aquatic turtle native to North America. G. The common name for the false map turtle is Pseudemys pseudogeographica. The Mississippi map turtle is one of the two other subspecies of fake map turtles. Their names come from the fact that the lines on their bodies and shells mimic contour lines on a map, hence the name “map turtles.”
Even for a little turtle, they are on the diminutive side. It’s important to note that females are considerably larger than males. A male will thrive in a tank as small as 20 to 25 gallons, but a robust female will require at least 75 gallons.

The Golden Thread Turtle is only found in China, Laos, Taiwan, and Vietnam, all of which are in Asia. In order to survive, this endangered species needs calm, lowland rivers. Their diet is varied and includes both plant and animal matter, with age influencing the proportion of plant matter consumed.

The Indian Tent Turtle is a tiny, semiaquatic reptile found naturally only in India and Bangladesh. Their tent-shaped shells are what give them their common name, and they are often a dark brown color. The shells of Indian Tent turtles are pink and feature reddish spots behind the eyes.