Tegus are massive lizards, commonly mistaken for monitors due to their large stature and intimidating looks. Many species of tegu can grow to lengths in excess of five feet and weigh up to 20 pounds, which is why they’ve become invasive species in many places. Their natural habitat lies across South and Central America, where they can be found in diverse environments ranging from near deserts to tropical rainforests.

In total, there are more than 400 species of lizard that are classified as tegus. They span a natural range of more than 1,000 miles, and invasive populations live in areas around the world, including several stable populations in Florida. We’re going to take a closer look at 14 of the most well-known tegu species and morphs, some of which are even kept as pets.

What Is a Tegu Lizard? Tegu is the common name for two families of lizards (Teiidae and Gymnophthalmidae) that are native to Central and South America. In these two families, there are over 400 different species of lizards that span a range of over 1,000 miles. Because these lizards span such a wide range, they live in many different habitats including rainforests, savannas, semi-deserts, swamps, and lagoons. This means they can live in many different types of environments and are invasive.

Because of their large size, they cannot be kept in small enclosures. They need lots of space and activities to keep them busy, both inside and outside their tank. They should spend most of their time in their cage but should be let out once a day. Inside their tank, they may want to swim or bask. Outside, they like to walk around and will need supervision. They are very intelligent reptiles and can even be house-trained.

Many Tegus are easy to spot as they have black and white banding patterns, but some are speckled, red, orange, yellow, and green. They often have long snouts and thick necks. They have small scales, forked tongues, and five distinct toes.

Deciding to adopt a Tegu is a big decision. They are very smart and large lizards that need plenty of living space and exercise. They take lots of time and dedication that not every reptile owner can provide. However, if you have decided that a Tegu is for you, then read below to learn about the different species and what to consider. 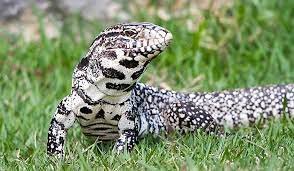 Black and White Argentine Tegus are the most popular and best type for keeping as pets. They’re very large, but unlike many tegus, can be trained for handling. With regular handling, they become quite docile and gentle, though they can certainly be aggressive without regular handling.

Also, know How Much Does A Bearded Dragon Cost? Species Price Guide

They’re about five feet long on average and live for 15-20 years in captivity. As the name suggests, these tegus are black and white in color with bands and speckles of both colors. They’re common on the pet market, and prices range from $200-$500 on average. Crocodile Tegus are some of the smallest and rarest species. Their natural range is Colombia, Venezuela, French Guinea, Brazil, and Peru. This species does not actually look like a crocodile, but it has a thin body, long tail, and square head. Their heads are typically green-brown in color and most of their body is brown-gray with a gray and red tail.

Like crocodiles, this Tegu enjoys being in the water. They have short legs to help them swim and are often found in streams or lagoons. They can be found living near Caiman Lizards, but they do not interact often or compete for food due to a difference in diet. Caiman Lizards only eat mollusks. Crocodile species eat arthropods, crustaceans, fish, and different frog species.

Crocodile species are not found in the pet trade. They should not be kept as pets and are not commonly found for sale. This species is even rare to find in the wild. On the rare occasion that one is found in the wild, it should be left to continue populating. When a Crocodile Tegu does find its way to the pet trade, it may sell for as much as $13,000. It is possible to see them kept by highly experienced herpetologists and field researchers. Sometimes they are even kept in a zoo, but they are not for someone looking for a lizard pet. 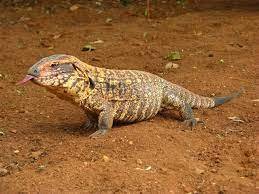 Yellow Tegus are not available in the pet trade. They’re similar in appearance to Black and White Tegus, except they have yellow and black coloration rather than white and black. Additionally, Yellow Tegus are smaller, generally weighing 8-10 pounds at an average length of two to three feet. An Albino Tegu is not a species in itself, but it is an Argentine Tegu morph. Similar to how herpetologists selectively breed other lizard-like bearded dragon morphs, they also breed Argentine morphs.

Albinos lack the pigmentation of wild-type Argentine species. This means they often have lots of white coloring on their skin and they may also have different patterns too. Sometimes they also have pale gray-black bands or red spots.

There are also ice albino Tegu morphs which are an example of two morphs being bred together. The Ice and Albino Tegu has lighter whiter skin.

Albino Tegus are not very common in the pet trade and are usually only kept by experienced herpetologists. They can cost as much as $3000! 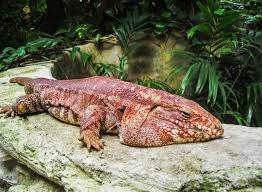 Argentine Red Tegus aren’t quite the longest tegus. Females top out around three feet in length while males reach a max length of 4.5 feet. However, they are the heavyweights of the tegu world, with adults weighing around 50 pounds! They sport a reddish-brown color with black stripes across the body and broken white stripes running their length, though juveniles tend to be a brownish-green color; the red only sets in as the lizard matures. Purple Tegus are not an actual species of Tegu, they are a morph; just like the Albino above. Although they can be found naturally in South America, it is thought they are a hybrid of the Blue and Red Tegu. This is what gives Purple its name. But, they are not actually purple!

Unlike the Albino Tegu, they are not always selectively bred. The Red and Blue Tegu is also a natural morph that can be found in the wild.

Purple species are normally black and green. The Purple Tegu is just like any other Argentine species with an intelligent and personable nature. They are generally more expensive due to their rare status and cost $200 to $400. Tupinambis quadrilineatus, more commonly known as the Four-Striped Tegu, is a very rare lizard that calls central Brazil it’s home. Almost nothing is known about this tegu species. 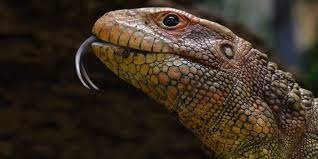 Caiman Lizards (Water Tegu) are not the most common Tegu species, but they are in high demand as pets. This demand means they are expensive and cost about $400 to $500. They are a very rewarding lizard and enthusiasts love them for their bright colors. They often have bright red or orange heads with green body. Caimans can grow up to five feet and are one of the largest Tegu species.

As well as being agile climbers and strong swimmers, they are very intelligent and loyal. If kept as a pet they must have large areas to swim and climb. In the wild, you will often find this colorful lizard resting on tree branches or swimming in the water. They can be identified by their unique color patterns and these resting places, as not many Tegus like the water like Caiman Lizards do.

A tall cage with sturdy branches will suit their need to climb, and a small pool with 12″ of water is enough for them to swim in. An owner should be prepared to dedicate a large part of their house to this lizard.

Unlike most Tegus in this list, Caiman Lizards mostly eat aquatic snails. They have very powerful jaws to eat this unique diet. Although they are not aggressive, owners should be aware of their strong bite. Tegus are a diverse group of lizards that can range in size from just 18 inches to over five feet! Some of the heaviest specimens can even weigh more than 50 pounds! These lizards are colorful and stout, but not much is known about many tegu species. Some of them have even turned out to make good pets, but you need to know what you’re getting into before committing to keeping a tegu, as they have extensive care requirements and can grow to massive sizes.