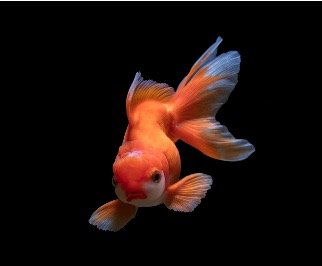 On the head, scales, tail, or fins, black spots can form. You may also notice your goldfish’s fins turning black.

The sudden appearance of black spots on your goldfish may not be cause for concern or it may indicate a major issue. Therefore, it’s critical to identify the causes of your goldfish’s blackening as soon as you can and to begin treatment, if required.

The most typical ammonia burn is by far that.

Unfortunately, burns caused by ammonia are likewise very serious and frequently fatal. Because of this, it’s critical to take early action in order to identify the causes of your goldfish’s blackening.

Ammonia burns are causing blackening of the goldfish

The chemical ammonia can be discovered in the feces of your fish. It can burn goldfish all over their bodies and is extremely dangerous.

A goldfish’s body tries to cure itself after suffering an ammonia burn. In the same manner that a burn on human skin may leave a scar, this results in black areas on the goldfish.

Thus, it may be said that your goldfish turning black is a good indication. The ammonia burn is mending, so that’s good!

However, you must take precautions to ensure that it doesn’t happen again if ammonia once burned your fish.

How to determine whether ammonia burn is to blame for your goldfish’s blackening?

An ammonia test is the first step in determining whether ammonia burn is the cause of your goldfish’s blackening.

Testing for nitrites and nitrates will help you determine whether your tank has been cycled appropriately.

If your tank is not adequately cycled and your fish have lately been exposed to high ammonia levels, then high nitrite levels may be evidence of ammonia burn.

The nitrates themselves can be harmful to goldfish.

Ammonia spikes and ammonia burn are likely to occur in a tank that is either too small or overfilled.

How to avoid burning from ammonia

There should be no ammonia in your tank if it is correctly configured, including having been cycled. You should also make routine water changes. Any ammonia your fish may release is immediately absorbed by bacteria or transformed into nitrites by them.

However, the ammonia levels will start to rise if your tank is not cycled, has an excessive number of fish, or is too tiny.

Unfortunately, not much ammonia is needed to begin burning your fish’s fins, gills, and scales.

A goldfish that is kept in ammonia-containing water will experience stress, trouble breathing, and most likely die rather rapidly.

Scabs and scar tissue that form at the site of an injury in humans are an indication that the wound is healing. 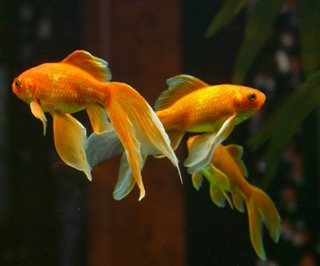 This repairing tissue is black in goldfish. Thus, black areas on your goldfish may indicate that it has been hurt but is recovering.

If you are aware that your goldfish has recently been hurt and the black mark is located exactly where the injury was, this is almost certainly the cause of their darkening.

They could have black patterns from birth or they could acquire them later in life alongside other colors and patterns.

A goldfish’s colour typically changes during the course of its life, at least to some extent, and while black spots may be a part of this transition, they are not necessarily cause for alarm.

Additionally, certain varieties of goldfish are designed to be black or mostly black. The Black Moor and other breeds with calico patterns, such the Shubunkin, are examples of them.

When a change in coloration in your goldfish is merely a result of normal aging, it is typically simple to identify.

Even while some fish can develop black patches naturally, you should still look into the cause to be safe. Fin clamping, air gulping, and damaged or jagged fins are further behaviors that point to a problem with the water or the tank environment. Always check your water’s characteristics if you’re unsure. The most common reason for disease in goldfish is poor water quality, which also creates conditions for a variety of parasites, infections, and wounds like burns and fin injury. Even if you believe there isn’t an issue, it is always best for your goldfish to check the water. When it comes to the formation of black patches on your goldfish and water quality, it’s better to be cautious than sorry!