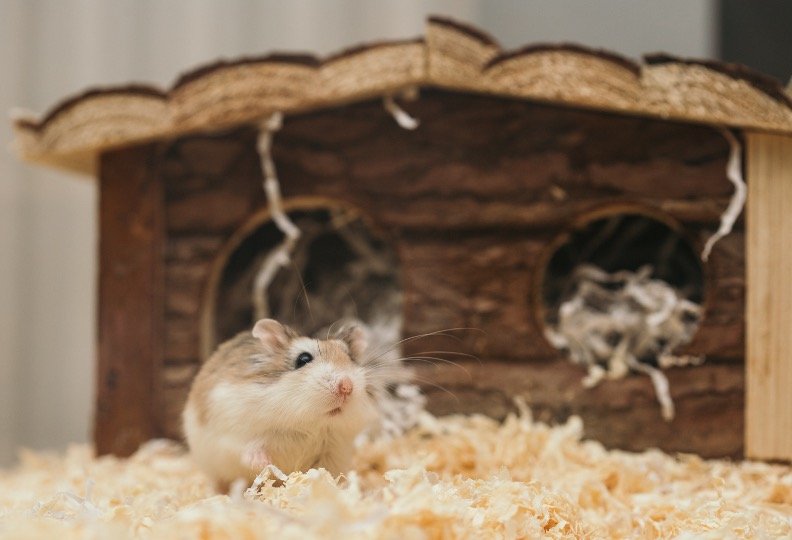 Can Hamsters and Guinea Pigs Live Together?

If you love having furry, small, and cute animals at your home and you are planning to get and keep a hamster and a Guinea pig in the same cage, think again. It is not recommended to keep them together, definitely not in the same cage.

Even though hamsters and Guinea pigs both are rodents, they do not get along as their natures are very different. Guinea pigs are social animals, hamsters on the other hand are solitary ones.

The answer to your question is no. It is not advisable for you to keep your hamster and your Guinea pig together. Their cohabitation is not recommended.

What are the main differences between a Hamster and a Guinea pig?

Hamsters and Guinea pigs both are cute and furry. They both come from the rodent family but are two completely different species. This is why their temperament and nature are so different. They also have some significant differences in their appearances.

Guinea pigs have nothing to do with the family of pigs, they are fluffy rodents from the genus Cavia. The Cavia genus is native to South America. Hamsters are rodents. They belong to a subfamily of Cricetinae, which contains about 19 species and are classified into 7 genera.

Hamsters and Guinea pigs have quite similar diets as they are rodents. They usually feed on leaves, fruits, vegetables, seeds, and roots. They both are omnivorous animals but their diet is more plant-based.

Hamsters have pouches in their cheeks to store food which is why they prefer seeds. This is one of the reasons you have to feed Guinea pigs more often than hamsters. Also, you should feed guinea pigs with food that is rich in vitamin C.

Hamster vs Guinea Pig (Difference between their appearances)

Hamsters live for about two to three years. Their size usually varies from species to species. They have a small tail. The smallest hamster species is the Pygmy shrew, they weigh about 5 grams. On the other hand, golden hamsters are the largest pet hamster species.

Guinea pigs live for about 4 to 8 years. They are bigger than hamsters. They are measured around 8 to 10 inches and weigh around 1.5 to 2.6 lbs. They do not have a tail and have very short legs. They have a long or short coat with varying colors according to their species.

Hamsters vs Guinea Pigs (Difference between their temperaments)

Guinea pigs are known to be very social and friendly which is why they are great pets. They generally like to live in groups. Your Guinea pig can get depressed if it is often left alone. It is recommended to domesticate Guinea pigs in small groups and give them attention often.

Hamsters are known to be solitary animals. They cannot adjust with a cagemate who is not another hamster. Hamsters are nocturnal animals. Hence they are very active and energetic at night. Hamsters do not like to be petted and can get very aggressive. They can even bite if they feel threatened. Also, hamsters hibernate in the winter season.

The cohabitation of Guinea pigs with other animals

As we have come to a conclusion that Guinea pigs and hamsters should not live together due to their different temperaments and their natures. Let us see if you can cohabit the following animals  with your Guinea pig:

Your cat might think of the Guinea pig as prey due to its size. Your cat can end up seriously hurting your Guinea pig. It is not recommended to keep them together or under the same roof as Guinea pigs like to run around and this may trigger the predator instinct of the cat.

Raising a mouse or a rat with a Guinea pig is very possible. They can live together and get along pretty well.

Hamsters only get along well with a fellow hamsters. Other animals can threaten and intimidate your hamster. Generally getting and domesticating hamsters in a pair is the best idea. Another duo to completely avoid is Hamsters and Ferrets. Do not keep your hamster with a ferret. A ferret is a predator and it might threaten and hurt your hamsters.

Ferrets and hamsters cannot live together. This is because hamsters are prey to ferrets and they will be constantly in danger. It is not possible for you to create an environment that is safe for the hamster. Even though hamsters are not the most natural diet of prey, hamsters are an easy target for even predators like cats and dogs.

Your cat might think of the hamster as prey due to its size. Your cat can end up seriously hurting your hamster. It is not recommended to keep them together or under the same roof as a hamster may trigger the predator instinct of the cat.

Hamsters are prey and dogs are not. They do not get along well. Do not keep them together.