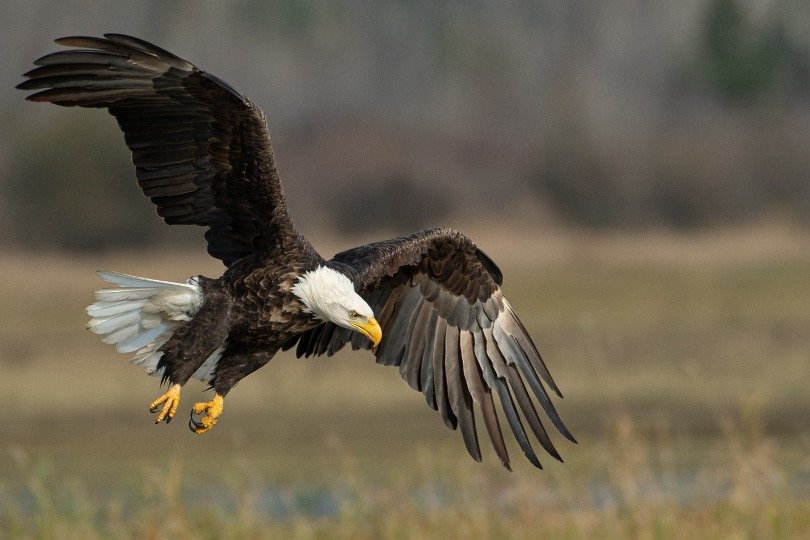 What do Bald Eagles Eat?

Eagles are the most dangerous bird and the bald eagles are one of the carnivorous creatures with snowy white feathers and powerful features. The bald eagle is a national bird of the United. The bald eagles mostly consume fish, small mammals, snakes, and more.

They fly around their food and when they get the opportunity they gasp at their prey and continue flying. They won’t be seen catching their prey on the ground. More than 400 species are included in their prey categories.

The bald eagle is big and powerful and its head has white feathers which contrast the colour of its body and its wings are a brown hue. This feature of his makes this kind of eagle, bald eagles. They are endangered creatures. They are generally found in areas next to water bodies and areas close to coasts and lakes.

They have sharp black talons which help them to catch their prey. These creatures grow to about 2.5 to 3.5 feet in height and the wingspan is 6 feet which is quite impressive. Females are generally larger than bald eagles.

Where are they found?

Bald eagles are found commonly in North American regions. They are quite popular in Alaska. They generally reside in the areas near the coast and lakes, along the east and west coast, mountains, and The Mississippi River. Bald eagles can be seen migrating during winters. They soar above lakes during summer and finding food becomes easy for them above the lakes with a lot of fish and flamingoes.

What do Bald eagles eat?

Bald eagles are carnivorous animals and powerful predators and they target these animals for whom they are confident of hunting them without harming themselves. They can feed on varieties of animals like salmon, catfish, crabs, amphibians, and others.

These are the list of food that bald eagles generally eat:

Eagles can consume whatever they find as their food, including the dead animals. They can consume 5-10% of fish in a day. In a day they can eat approx 5 pounds of food.

How do bald eagles hunt?

Bald eagles are powerful creatures and clever predators. They are skilled hunters and their speed is more than enough to catch their prey. They fly high and can easily detect their prey from high perches. They can watch their target from high above by flying lowly over slopes.

After detecting their food or better say, target, they come at great speed towards the victim and snatch it using their talons which are sharp enough to grip or harm the prey. Bald eagles usually steal the prey of other animals as they are too lazy to find and hunt for themselves. These creatures hunt for their food during the day.

What do bald eagles eat during the winter?

During winter times bald eagles don’t waste their energy much in searching for their prey and they generally hunt for scavengers. Roadkill is an easy target for bald eagles during winters.

What do baby bald eagles eat?

Baby bald eagles eat raw meat which their parents bring for them. The adults tear the flesh into smaller pieces and then directly feed it to their babies. Babies of bald eagles from the start become habitual of this type of food rather than the soft flesh which is generally preferred by other birds.

More FAQs about bald eagles and their food?

So there are many questions about what bald eagles eat. So everything has been mentioned above. Here are some more FAQs regarding their food and diet.

Do bald eagles eat other birds?

Well, yes. The bald eagles eat birds and target those on the ground rather than those in the sky. That is the reason waterfalls are easily targeted. But bald eagles can hunt any bird if they are the easy target to approach.

Bald eagles do eat cats and small dogs and they target them whenever they get the opportunity but this thing is rare. Cats are generally not very common prey available to eagles but the other small mammals like squirrels, rabbits, raccoons, etc are easy targets for bald eagles.

Yes, bald eagles do eat live animals but they hunt cleverly so that they won’t get hurt in hunting their prey, that is why bald eagles are known as clever predators. They don’t prey on bigger animals or the ones who are difficult to fight. They are likely to hunt live animals on the ground, especially those which are small in size and require less energy to kill and eat.

But if the animals are already dead then the bald eagle’s work becomes easy as they get their food without wasting their energy on hunting and killing. Eagles don’t migrate in flocks, some migrate alone and some breeds might migrate. The adult bald eagle has a higher survival rate likely to 90 percent or more.

These powerful creatures hunt for prey that is easily approachable, otherwise, they prefer to eat the prey of other animals because they are easy targets for bald eagles. Bald eagles are great for nesting. These species create huge nests from sticks which they collect to make their home.

Bald eagles are an endangered species and their population is increasing but being in wild ranges they do face a lot of life-threatening problems which cause the reduction in the lifespan of bald eagles.