Penguins are well-known and readily identifiable birds, however, they can be picky eaters with a restricted diet that is endangered by unethical actions. Penguins occur in various sizes and types. They are aquatic birds without wings that inhabit the southern hemisphere. A deeper understanding of what penguins consume can aid in the protection and conservation of their food-rich habitats and provide penguin rehabilitators with additional tools to properly address the dietary needs of these distinct birds. 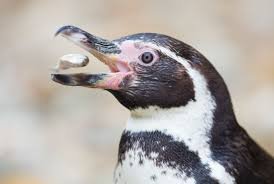 Their diets vary by species, and only one of the 18 diverse species lives north of the equator. It is essentially the penguin’s size and weight that affects its nutritional preferences.

Additionally, female penguins are typically the family’s hunters and gatherers. Therefore, the female penguin consumes more than her mate and frequently abandons the nest in search of better food alternatives.

Penguins are carnivores with piscivorous diets, obtaining all of their food from the ocean and relying on clean, nutrient-rich waters. The precise foods consumed by various penguin species depend on their range, beak size and shape, foraging habit, and other factors, but the following are the most common: 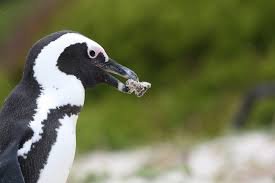 How does the penguin obtain its food? 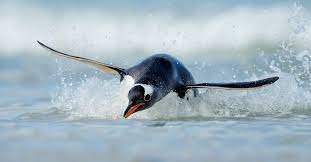 Penguins eat in the ocean. The majority of feeding occurs within 15.3 to 18.3 meters (50 to 60 feet) of the surface. Prey locations might vary by season and even by day. When hunting, penguins mostly rely on their vision. How penguins discover prey in the dark, at night, or at extreme depths is unknown. Some experts suspect that the bioluminescence (light-producing) abilities of numerous oceanic squids, crustaceans, and fishes aid penguins.

Parents will return to the nest to feed their young penguins. The parents will vomit fish that they have swallowed for their youngsters. All penguins hunt in the same manner; they either capture their prey in the water or scrape krill off the ice’s bottom. Instead of teeth, they have a highly sharp bill for this purpose. Their mouths and tongues are studded with spines that point back toward their throats, allowing them to easily ingest prey such as squid, shrimp, and fish.

Unfortunately, many of the penguins’ habitats are threatened by industrial fishing and ocean pollution. These factors may compel penguins to go even further to find food.

What do captive penguins eat? 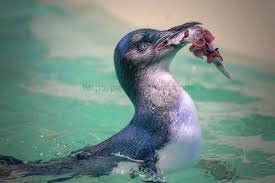 Unlike their wild counterparts, captive penguins do not experience prolonged fasting periods or weight changes. Instead, their meals are closely regulated by rehabilitators, biologists, zookeepers, veterinarians, and other caretakers, and they are often hand-fed whole or chopped fish similar to what their counterparts in the wild could capture. Supplements may be given to the meals of penguins in captivity as needed to maintain the nutritional balance necessary for their health in their unique, artificial surroundings.

How do penguins nourish their young? 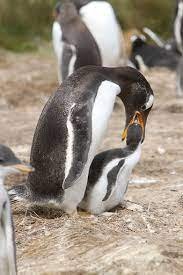 If a penguin has chicks, it will capture and swallow its food, then “store” it to feed its chicks at a later time. Obviously, some will be kept for themselves so that the parent can continue to hunt and survive. Because chicks cannot digest food like their parents, the adults must transform it into a form that the chicks can consume. The first method is regurgitation, the second method is the equivalent of “refrigerating” the meal, and the third method is a secretion formed from digested food.

Penguins undergo yearly fasting periods. Prior to fasting, penguins build up an energy-supplying layer of fat. During breeding seasons, penguins fast for extended durations and do not leave their nesting grounds to feed. During the courtship, nesting, and incubation periods, certain penguins fast. 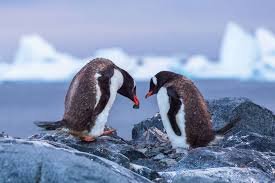 Penguins also fast during their annual molt. Penguins cannot enter the water to feed due to the temporary lack of insulation and waterproofing induced by molting feathers. Their fat layer sustains them till the molt is complete.

Near the time when they will replace their juvenile feathers with adult plumage, chicks undergo a period of rapid growth. Typically, by this point, the parents have stopped feeding the chick. During this fasting time, growth ceases but restarts once the molt is complete.

The duration of penguin fasting varies with species, sex, and style of fasting. The king and emperor penguins have the longest periods of fasting. During courtship and the initial incubation shift, breeding male king penguins may fast for up to 54 days. Male breeding Emperor Penguins may fast for 90 to 120 days during courtship, mating, and the duration of incubation.