In 1944, the mockingbird became the official state bird of Mississippi (the northern mockingbird is also the state bird symbol of Florida, Texas, Tennessee, and Arkansas). The Northern Mockingbird has amazing vocal capabilities; it can sing up to 200 songs, including those of other birds, insects, amphibians, and even the occasional mechanical sound. Mississippi is the 32nd largest state by area and the 35th most populous in the United States. It is known for the Mississippi River and consists primarily of low hills and lowland plains.

Why is the Northern Mockingbird the Mississippi state bird? 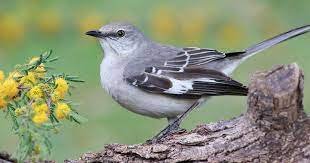 In the early 1940s, the Women’s Federated Clubs of Mississippi undertook a campaign to name the songbird the state bird of Mississippi. The state’s inhabitants selected the bird, and in the spring of 1944, the legislature passed legislation. This bird, one of the greatest entertainers, sings day and night for the citizens of the state.

During the winter months in Mississippi, it is typical to observe mockingbirds congregating near farms. In pursuit of food, the Mississippi state bird frequently visits farmers’ fields. These birds prefer fruits, seeds, and nuts, however, the mockingbird will also consume insects. As soon as spring arrives, male birds can be heard singing their enchanting tunes. 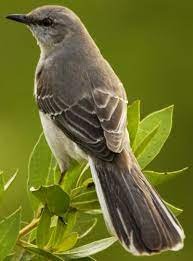 The female Northern Mockingbird is smaller than its male counterpart. Aside from having a grey chest and upper body, both sexes have stomachs that are a contrasting but complementing shade of light grey or white. These birds’ beaks are brown at the base and black everywhere else.

Despite being tall and having a large wing span, these birds weigh very little. They normally attain a weight of 1.75 ounces. The average length of the Northern Mockingbird of Mississippi is 10 inches, and its wingspan is 14 inches.

The United States declared it unlawful to keep a mockingbird as a pet since captivity drastically shortens its lifespan. In the wild, a mockingbird can live up to 80 years, but in captivity, they only have a life expectancy of 20 years.

Why are mockingbirds considered to be the king of songbirds? 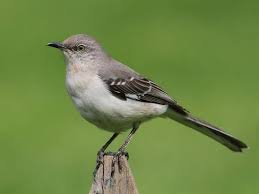 The scientific name for the Northern Mockingbird, Mimus polyglottos, directly translates to “vocal mimic.” Due to its great variety and diversity, this bird’s sound is even compared to Beethoven and Kendrick Lamar, much like its moniker.

These medium-sized birds can mimic the songs of other birds, amphibians, and even automobiles. They can sing over 200 tunes. If you heard their imitations without seeing them, you would not be able to distinguish between them.

Mockingbirds also differ from other passerines in that they employ more muscles in their vocal organ (syrinx) than other passerines. Theoretically, they have more specialized brain tissue for song memorization than others.

The capacity of mockingbirds to imitate the songs and vocalizations of other kinds of birds and insects led to their naming. Males often have louder vocalization and pitch, whilst females have a softer tone. Mockingbirds are generally audible at night when they sing.

What behavior do mockingbirds exhibit?

Standing resolutely on their tiny bodies, these birds, particularly the males, are very territorial throughout the entire year. They may defend their territory against other mockingbirds, cats, and occasionally people.

Typically, songbirds protect their area through singing. It has been suggested that the mockingbird’s mimicry may mislead rivals into believing that the area is already populated by birds of an invader’s species, so causing the invader to move on.

Regarding their diet, they are considered omnivores. They are able to consume berries, insects, worms, and snails. Because they have a wide variety of food options, they compete with the majority of bird species. 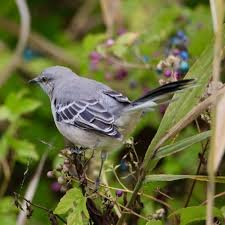 Mockingbirds date. By signing, they meet potential mates. They date multiple birds until they find the appropriate one, after which they choose a partner. It could be compared to marriage because this species is monogamous and remains paired for life. Together, they construct a nest of grass, sticks, twigs, and leaves. After constructing their nest, the birds reproduce. They rear their young birds according to consistent routines. In Mississippi, only one breeding pair per 20 acres constitutes a breeding area for these birds.

Even while both males and females sing, male singing and mimicry are more abundant. Males sing loudly in preparation for the spring breeding season. In contrast, females seldom sing during this season; however, they do sing in the fall. This behavior aids men in attracting partners for reproduction, as females prefer males with a more vocal variation. To the annoyance or amusement of their human neighbors, unmated male mockingbirds will risk predation in order to sing loudly at night. 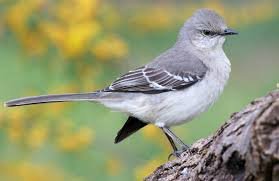 They are extremely territorial and consider their nest to be their territory. They defend their nests by attacking or at least chasing away any potential predator. These birds see humans and domesticated animals as predators. Mockingbirds will attack larger animals, such as cats and dogs. As long as you stay away from their nest, there will be no issues. Simply enjoy their music from a distance. A mockingbird recalls both humans and other creatures that it encounters.

While some of these birds are permanent residents of Mississippi, others frequently visit Mexico or Canada. Mockingbirds normally prefer beach or ocean environments, but you can also find them living comfortably on land in Mississippi. These birds also inhabit Great Britain, another of their natural habitats. One should search for them in urban or rural locations with open terrain. They cannot be found in the forest. The Northern mockingbird prefers to spend the full year in the same environment, therefore if the region is warm, they will not migrate further south.

Their offspring attain sexual maturity at one year of age. When this occurs, they find a mate and commence reproduction. These birds nest twice per year, perhaps more frequently if the conditions are favorable.