The Bald eagle, one of the world’s most recognisable and beautiful birds, is a symbol of American pride. Except for Hawaii and parts of northern Canada and Mexico, bald eagles can be found across the United States. As a result of their enormous stature and weight, the nests of these birds have been examined extensively for generations.
For more than just being an emblem of the United States, Bald Eagles are cool in their own right! Bald eagle nesting habits are one of its most distinctive characteristics. Bald eagles are one of the few birds capable of nest construction, and even fewer are better at it. Learn some interesting facts about bald eagles and their breeding behaviors by looking at their nests.

Nesting of a bald eagle 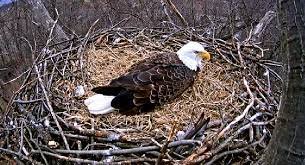 Bald eagles like to build their nests in forested locations near huge bodies of water, avoiding densely populated areas wherever feasible. Foraging Bald Eagles may swarm around fish processing factories, waste disposal facilities, and dams where large numbers of fish congregate. In order to perch, Bald Eagles require tall, mature coniferous or deciduous trees that provide them a clear view of the area around them. These birds can also be found in dry, open uplands that have access to water for fishing during the winter months.

In which parts of the world do bald eagles lay their eggs?

Bald eagles prefer to nest near the coasts, rivers, and huge lakes, where they have access to a sufficient food supply. Trees, cliffs, and rock promontories are common places for them to build their nests, having a commanding view of the surrounding area. On power poles and communication towers, bald eagles rarely nest in Alaska.

As they soar through the treetops, bald eagles seek out the largest, strongest trees for their nests, which may weigh upwards of a tonne. Perches with an excellent view of the water, where the birds forage, are characteristic features of nest territory. There are several materials that can be used to build an eagle nest, such as huge sticks and moss or grass. In most cases, the circumference of a typical nest is about 4-6 feet and the depth is about 3 feet.

When do bald eagles nest? 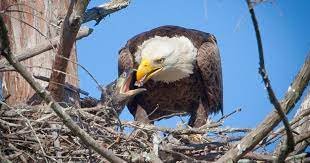 Egg-laying begins in April in Alaska, however, the exact date varies from year to year. The number of eggs in a clutch varies from one to three. Successful breeding pairs typically produce one or two offspring, and seldom more than three at a time. Ten to twelve weeks after hatching, eaglets take their first shaky flights and eventually fledge (leave their nests).

Also, know the Types of owls in Alabama

Approximately four months elapse between egg laying and fledging. Young birds, on the other hand, tend to stay close to the nest for a few weeks after they’ve hatched because they’re still dependent on their parents for nourishment. Six months is the length of the complete breeding cycle, from the time a nest is established to the time a fledgling is dependent on its mother.

Why are Bald eagles’ nests so big? 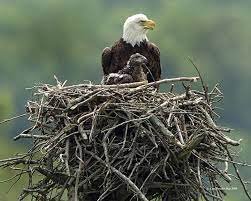 The construction of bald eagle nests takes between one and three months. It is a team effort to create a nest, although the female usually takes the lead while the male provides the materials.

The size of a Bald eagle’s nest is one of its most distinguishing features; on average, the nest measures roughly 1.2 to 1.5 meters in circumference (4 to 5 feet) and 60 to 120 centimeters in depth (2 to 4ft). Every year, bald eagles add between one and three feet of additional material to their nests. Nests as huge as 2.89 meters (9.5 feet) in diameter and as deep as 6 meters (20 feet) were discovered in St. Petersburg, Florida, and weighed as much as three tonnes!

Although majestic, Bald eagles are somewhat sluggish and spend much of their time in the nest. In the words of Benjamin Franklin, the Bald eagle is a lethargic bird that has no right to be a symbol of the United States of America. 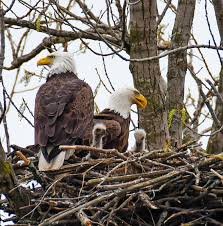 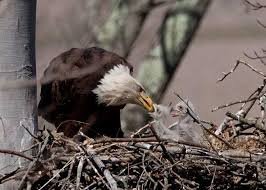 Due to the size of the eagle nest, a huge and solid tree is required for the nesting process. A couple of eagles will often choose a dominant tree in the surrounding forest to build their nest in order to have a clear view of a lake, river, or major creek. A good nest tree enables an easy glide out of the nest and a superb vantage position for scouting potential dangers. A few nests are positioned close to human activity or roadways, however, they are not frequently or directly approached by humans.