Hamsters are rodents that are quite popular as small pets. They belong to a group of species called Cricetidae. The most common type of hamsters that are preferred as pets is golden/Syrian hamster, dwarf hamster, roborovski hamster, and the winter white dwarf hamster.

What are the general features of a hamster? 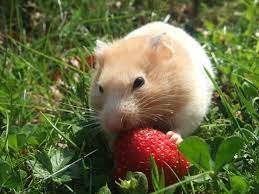 A typical hamster has a short and stout furry body, tails are shorter than their body, and they have stocky legs with wide feet. The fur of hamsters is thick and silky, and depending on the type of hamster can be of varied colour; black, grey, white, brown, yellow or even a mix.

What do hamsters eat? 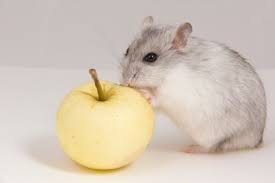 Hamsters are omnivorous animals, they eat both vegetables and meat. Wild hamsters have a different diet than pet hamsters. Hamsters in the wild can survive in seeds, and grain and even eat insects. Being omnivores allow hamsters to have a wide variety in their diet, pet hamsters need to be given commercial, high-quality food that contains vitamins, minerals, and other nutrients.

Grains include unsweetened whole grain, cereal, brown rice, wheat bread, and unbuttered popcorn. Nuts and seeds containing high fat should be avoided as they lead to obesity in hamsters. Vegetables like cauliflower, lettuce, spinach, sweet potato, artichokes, carrot tops, and fruits like watermelon can be fed to hamsters.

Fruits that can be given to hamsters include pears, strawberries, grapes, bananas, and blueberries. Fruits should be given in moderation, to supplement their regular diet. Since hamsters are omnivores they can be given protein like eggs (hard-boiled), cooked chicken, and occasionally insects like mealworm and crickets.

Also, know How much does a hamster cost?

Hamsters should be given fresh water that has been filtered and chlorine-free. Water should be changed daily. Nowadays, dry foods are available online and in pet stores, which contain all the required nutrients, and they are available in a variety of mixes.

Should apples be given to Hamsters? 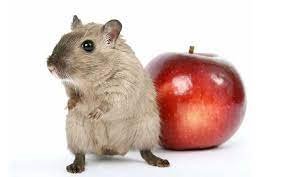 Yes, hamsters can be fed apples, they are a great choice for snacks. Some benefits of giving apples to Hamsters:

Additionally, hamsters love the taste and texture of apples, and they can be given both red and green apples.

Hamsters can also be given apple peels. Since peels contain nutrients, dietary fibres and vitamins, there is no need to peel the apples when given to hamsters. They can be given apples with peels. It is good to give the apple a good wash, in order to clean any pesticides on them.

Hamsters should not be given apple seeds. Since these contain cyanide, which is toxic in nature. Apple seeds may not have any effect on humans until they eat them in large amounts. But since hamsters are very small animals, they can get I’ll and even die if they are given even one seed So it’s best to remove all the seeds in the apple before giving any piece to the hamster.

Are there any risks of feeding apples to Hamsters? 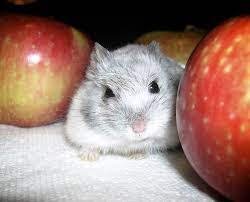 There are no risks as such, but as mentioned above, seeds should be absolutely avoided. It is best to give small amounts to the animal, as too many pieces can create digestive and bowel issues. Since hamsters will eat anything out in front of them it is up to the pet owner to control the apple portions.

If the hamster has not been given apples before, and it is being introduced into their diet, it should be introduced slowly and in tiny portions to avoid system shock, as it is with any kind of new food. It will reduce the risk of digestive problems and help avoid diarrhoea.

Apples contain a high amount of sugar. So hamsters should not be overfed apples as it can cause diabetes and make them obese. Hence apples cannot be included in their everyday diet. They can be given occasionally to supplement or boost their diet’s nutritional value.

By chance a hamster is overfed with apples, the side effects can be countered by making them drink lots of water, with a little bit of salt in them so that the excess food gets removed as urine and avoids dehydration.

In conclusion, apples are a great snack choice for hamsters when given in moderation, since they have great nutritional value and can boost the hamster’s diet.