Owls are predatory birds belonging to the order Strigiformes. Strigiformes is a term used to identify 200 species of predatory birds which are mostly nocturnal and isolated, and the exceptions to this group are the northern hawk-owl and the burrowing owl. A group of owls is called a parliament. 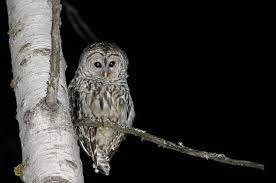 The general description of an owl is: it has a flat face; its eyes are large and faces forward, with ear-holes. Each eye has a facial disk, a collection of feathers, surrounding the eye. The purpose of these feathers is to direct the sounds coming from various distances, into the asymmetrically places ear cavities.

The position of the eyes allows owls to have a greater sense of depth perception than most birds, and the position is necessary for hunting in low light. Since their eyes are fixed to their sockets, they have to turn their entire head to change their view. Owls have the ability to rotate their heads and necks at least up to 270 degrees.

Owls are farsighted, meaning; they are unable to see objects present very close to their eyes, like a few centimetres. However, their vision of objects presents farther away is exceptionally good. Female owls are larger in appearance than males, and the size difference varies across the species. One of the reasons, for this size difference, could be so that male owls can forage efficiently. The largest owl in this species is the Eurasian Eagle Owl, whose size is almost 75 centimetres. The smallest owl is the Pygmy owl, whose size is as small as 11 centimetres.

Also, know Why do owls hoot?

Some Facts about Owls 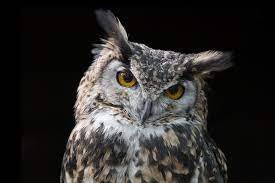 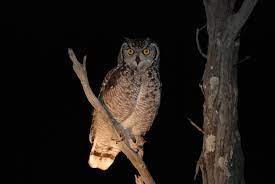 These categories are based on generalizations. Owls can adapt themselves to the changing pattern of behaviour of their prey, as well adapt to the weather. If they are required to hunt during the day, they most surely can. Owls are not active during the day, because of the way their eyes are structured. Unlike human pupils, which can dilate to control the amount of light entering the eyes, an owl’s pupil cannot dilate or get smaller. Hence, they keep their eyes half-closed, which gives the illusion that they are sleeping.

The majority of owls stay active during the night. Why? As their vision and hearing are superb, it makes hunting at night almost effortless. All it takes for an owl to detect a slight movement of the prey and they know which direction the prey is moving. Also, nighttime brings out more prey for them, like rodents. Preys feel that nighttime is the perfect time for them to move, but it’s also the perfect time for owls to hunt. Their plumage makes their flying have almost no sound, so they are actually the perfect predators of the night.

Some owls that hunt during the night are the Long-Eared Owl and the Great Horned Owl. Long-Eared Owls have excellent camouflaging skills and can be considered the most nocturnal of all owls. They can be identified by their long, low hoot. Great Horned Owls, move at night, and can mainly be heard, not seen.