Peacocks have the ability to fly, that much is true. They can take to the air and soar to the tops of trees or rooftops. They can glide with a few flaps of the wings as they descend from their perches, but they can also fly. They don’t soar like an eagle, swoop like a hawk, or flit from tree to tree like a warbler. Their range of flight is quite short. They only use flight for short distances, like climbing into and out of trees.
Peacocks can fly, but only for short distances and not for extremely lengthy periods of time. However, a peacock’s flight range is often less than a mile (1.6 km). Peacocks rarely take to the air unless they absolutely have to, whether it’s to get away from a potential predator, get across an impassable body of water, or get into a safe perch for the night.

When do peacocks fly? 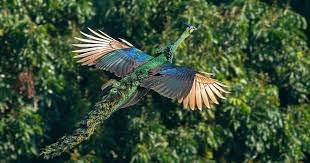 Peacocks have a physical structure that allows them to thrive in terrestrial environments. To satisfy their appetites, they scrounge and search for food on land. They consume a wide variety of foods, including fruit, insects, and seeds in addition to small mammals and reptiles. They may survive off of human food scraps in denser urban areas, whereas in rural locations they feast on crops and garden plants. They can easily adapt to a wide variety of diets. Given all this, they have no reason to take to the air in search of sustenance.

Peacocks can outrun and outmaneuver many of their potential enemies on land. However, if they are cornered by a large jungle cat, dog, or even wolf, they may resort to flight as a means of escape. Peacocks often congregate at night to roost on tall trees, though they have been observed roosting on rocks and man-made structures as well. Observations of roosting flocks of 100-200 birds have been made. Consequently, the peacocks will ascend to their nocturnal roosting location and descend from it in the morning.

How do peacocks fly? 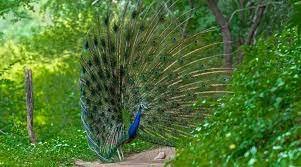 Peacocks’ ability to fly is not hindered by their lengthy tails. They jump up to 8 meters into the air and throw themselves almost vertically into the air to avoid hitting any trees. At a good altitude, they begin to quickly flap their wings with powerful, audible wing beats.

Once airborne, a peacock’s agility and the ability to twist and turn to make it a skilled obstacle avoider. When in flight, the tail spreads out like a fan. When in flight, it is also common to extend the neck.

How far can peacocks fly? 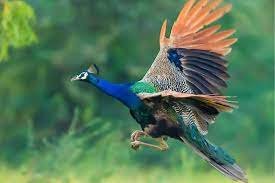 Due to their size, peacocks can only fly a short distance (typically less than 1 mile). Due to the strength of their legs, they are able to walk long distances each day in search of food, rather than relying on their wings.
The birds prefer to stroll rather than fly, but they have been seen to make brief flights in search of food.

How Fast Can Peacocks Fly?

Because a peacock’s flight is so brief and vertical, it’s hard to determine how fast it travels. Happily, for peacocks, neither time nor distance is a limiting factor. For them, the flight is reserved for getting to and from their roosts and, on rare occasions, avoiding danger. Like the settings these birds inhabit, which allow them to thrive year-round without moving, this is rarely a problem. Tail feathers on a peacock, which can be as long as six feet, don’t appear to affect the bird’s speed or altitude in any significant way.

How Old Are Peacocks When They First Learn to Fly? 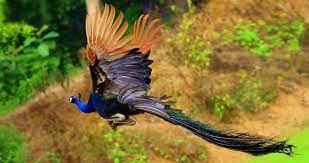 Chicks of the peafowl are usually cared for by their mothers, who shelter them from the elements by cuddling them under their wings. Since the ability to fly is so important to the survival of this bird, education is given top attention. Within a few days of hatching, a chick’s wings are strong enough to support flight, but teaching themselves the basics is a risky and time-consuming procedure. Chicks under a mother’s care learn to run and forage for food and are often encouraged to practice flying by their mothers in the evening. Peacock chicks learn to fly at varying ages, depending on a number of factors, but usually by the time their mothers abandon them, around six months old.

Is there a reason that every peacock can’t take to the air?

Peacocks kept as pets typically have their wings cut so they can’t escape. Peacocks have a remarkable ability to jump up to 8 meters, even with their wings cut.
Because of this, enclosures for captive peacocks need to be fairly high if the birds are not to escape. Peacocks that are confined for even a short period of time become accustomed to returning to their enclosures for roosting and feeding. This is good news for the peacocks, but it may not be welcome news for the neighbors.

How to Stop a Peacock Flying Away? 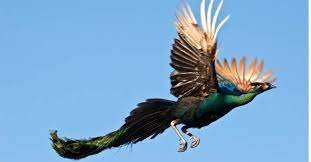 Even if a peacock is kept as a pet or in captivity, it will still go on foraging expeditions of several kilometers during the day and sleep in trees far from its enclosure at night. While clipping a peacock’s wings will prevent it from taking flight, the bird will still be able to leap up to 8 feet in the air, so a high fence will still be needed to keep it from escaping and roaming for miles. There is still a requirement for off-the-ground roosting accommodations for them. If peacocks are fed every day for a few weeks in an enclosure before being let loose, the peacocks will remember “home” and return. But that could be after they’ve visited other residences in the area, and your neighbors might not appreciate the noise and clutter they bring.